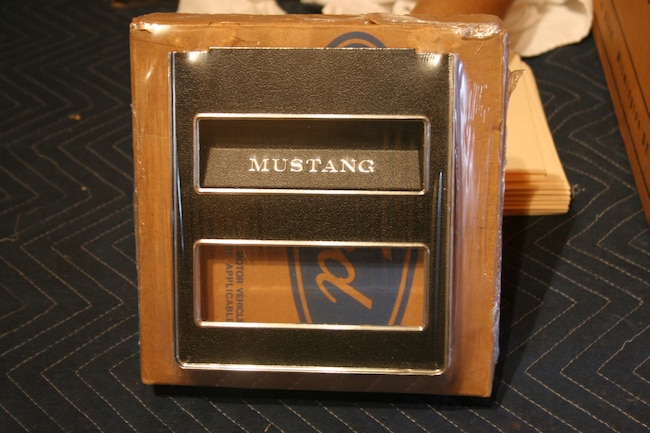 The last four years I've been doing a restoration on my ’69 Mustang SportsRoof with a 302 V-8 and two-barrel carb. The Mustang wasn't in its original state, and I would like to ask some questions regarding the original equipment. My goal is to restore it to the state it was when it came out of the factory. The car doesn’t have its original wheels. I am not sure what wheels and wheel covers were used originally. My Marti Report only states “7.35x14 4 P.R. BSW.” I’m not exactly sure what BSW means? According to the Marti report, my Mustang did not originally have a radio. How was the opening for the radio originally covered in the dash? Today, I can only buy a plastic frame with a slot for a radio already cut in. Finally, I was wondering if my car had a console; something like this (see pic provided)? I did find screw holes that would indicate there was a console at one point.

Your car is an interesting one—no radio, but air conditioning and power steering; an unusual combination indeed. BSW stands for black sidewall tires. There was not a white decorative ring, or white sidewall, on the outside of the tires. I believe the P.R. stands for Passenger Radial. It is interesting that your car lists a numbered tire. In 1968, they started using the lettered tire sizing like C78-14, which is the standard tire size for your 302-2V car. The optional E78-14 is the equivalent to a 7.50x14, and the 7.35 would approximately cross to a D78-14, which isn’t on the original options list for 1969. The wheels would have been a 14x5 stamped steel rim with the base five-spoke hubcaps. For more info on tire sizing, check out Jim Smart’s article online at www.mustangandfords.com/how-to/wheels-tires/mump-0511-best-ford-mustang-tires/sizing.html. The radio delete plate looks the same as your radio plate, but it does not have the two round holes for the control knobs and the center is filled with a camera case panel that says “Mustang;” shown here from the Bob Perkins collection. This is a very hard piece to find if you need one. The console that is installed in your car appears to be from the ’63-’65 Ford Falcon Sprint. A neat looking and nicely functional short console, but not correct for your car. Your car did not come with a console. Good luck with your restoration!

I have a ’68 Mustang with a 289 4V engine with an oil pressure gauge. I’ve had the car for six months and it runs great, but the oil pressure reads low at all times, barely raising off the end stop. I’ve tested the gauge by grounding the sending unit wire and watching the gauge go to the high pressure end of the gauge, so that seems to be OK. I then measured the resistance of the sender from the center stud to ground with the wire disconnected and it measures a little over 50 ohms without pressure. Can you tell me what the normal range of resistance is for the sensor at zero pressure and at normal engine pressure? I recall reading that without pressure, the sensor should read around 30 ohms and at normal pressure it should read less than 20 ohms, but I can’t find the source of that information anymore. If this correct, it says that the resistance range on the sensor is only around 10 to 15 ohms from zero pressure to normal pressure. Is this correct?

I assume you have the Ford factory oil pressure gauge. The sending units for Fords (fuel, oil, and temp) run between 10 ohms (high) and 73 ohms (low). The normal range for your engine should be somewhere near 20-30 ohms; 10-, 22-, and 33-ohm resistors are standard items, but you may have to hook a couple of resistors in series to get 73 ohms. Unhook your sender’s wire and place a 10-ohm resistor between it and to ground—it should go to the high side. It should go to the low side with the 73-ohm resistor. If you try a 22 or 33 it should be in the normal or middle range. If it is OK, then I would suspect the sending unit. If it is not OK, I would change the constant voltage relay on the back of the instrument cluster and test again. If that doesn’t do it then you have a bad gauge.

One other thing you might want to try, every time I fire up a new engine, I install a mechanical oil pressure gauge before I start it. I just don’t trust an electric pressure gauge to give me an accurate reading on startup. Aftermarket sending units can be all over the place, and the aftermarket gauge will give you a number rather than a range. If you have a buddy who has one or if you want they aren’t that expensive to purchase, confirm your oil pressure with a mechanical gauge. If it runs in the normal range then work on the sending unit for your dash gauge.