Beyond the Basics: Vintage Tech Advice 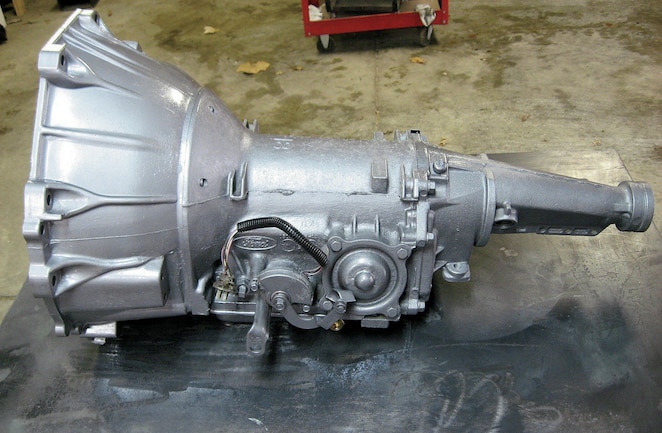 I have a ’68 Mustang with a 302 V-8 and C4 transmission. About 10 years ago I had the engine and transmission rebuilt. I am just now able to get the car back on the road, but every time I start the car, or drive it and put it back in Park, it shoots transmission fluid out of the dipstick. It will also go from being full to being empty. I have tried filling it up at operating temperature; going through all the gears with it on stands. I’ve also used my air compressor to blow out the vent, but it still spits transmission fluid out of the dipstick and it is a lot of fluid coming out. Do you have an idea what this might be? Thank you.

Evan Johnson
Via the Internet

The C4 is very touchy about overfilling, and if you have fluid coming out of the dipstick tube, it should be coming out of the vent as well. If it is the original C4 from 1968 it should have the vent tube on the driver side above the low-reverse servo cover. Later transmissions have a vent cap in the top of the tail housing (seen in the photo here). Your dipstick is mounted in the bottom of the case and is dumping into the reservoir (pan). So if the vent is working as it should, you should be getting fluid coming out of your vent as well. Here are some things to try.

-Try blowing compressed air into the vent and into the dipstick tube. Have someone listen for air coming from the other end. This will confirm that the path to the vent is clear.

-Check your transmission cooler lines. They kink easy, and if they aren’t getting fluid through to the cooler you may be overheating the transmission, and ATF expands quite a bit.

-Make sure you have the correct dipstick and tube. Some of the aftermarket dipsticks are made a little short—and overfilling a C4 is easy.

-Check the color of the fluid when it comes out. If it is pink, it is possible that you have water in the transmission, and water boils quicker than ATF. Make sure you aren’t getting radiator coolant through your cooler lines. If it is foamy, then it is probably over filled and touching the rotating assembly of the transmission. If this is the case I would check the dipstick and make sure it is the correct one.

-If it is happening when you put it in park, it is possible that you have a check valve somewhere stuck and not relieving pressure. Ten years is a long time for a transmission to sit. You may have to remove the valvebody and check by hand to see if anything is stuck.

-Make sure you are running Ford’s “Type F” fluid. The ’68 C4 was designed for Type F; don’t try to run the more modern Dexron/Mercon in it.

In your Dec. ’14 issue you have a feature on a ’68 Mustang big-block, four-speed convertible (Convertible Caretaker, page 74). In the feature the owner comments that it is a GT car but has drum brakes. I feel that comment is a bit misleading. The GT option was watered down quite a bit by 1968. To my knowledge, the ’68 GT package did not contain the front disc brakes as in prior years. My friend Woody Jacobson and I formed the Kitsap Mustang Club in the mid ’80s in Bremerton, Washington. Woody developed a history of the GT option back in the day for ’65-’69 Mustangs—what each year contained and what engine packages were required of the GT option. That could be an interesting article for you to do.

Rob Campbell
Via the Internet

You and Woody are correct; the disc brake option was not part of the GT package in 1968. In 1965-’66, the GT package was limited to four-barrel V-8s with dual exhaust and disc brakes. In 1968, all the V-8s, with the exception of the 289-2V, could get the GT package. It consisted of the heavy-duty suspension, dual exhaust with chrome outlets, slotted-Styled Steel wheels in argent or chrome, GT hubcaps and gas cap, GT badges, and the C-stripe on the sides. My friend has a 302-2V three-speed GT convertible, and disc brakes weren’t required on ’69 Mach 1s either—I owned a Drag Pak Mach I with drum brakes way back. More than likely the GT package was watered down for lower cost and improved sales.