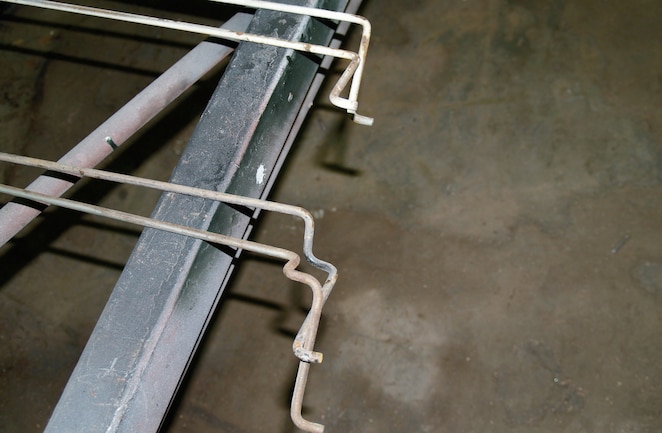 As the owner of a ’65 Mustang GT convertible, I was most interested in your reply to John Cowart regarding trunk torsion rods (Dec. ’14 issue). My car was built in April, 1965 at the San Jose (Milpitas) plant and has about 50,000 miles on it. Checking my trunk torsion rods and comparing them to your picture they are apparently a “hybrid.” On each rod one end has the “U” bend and the other end of the same rod has the “S” bend. They cross each other in the middle of the trunk. Have you seen this before? They work fine. I thought that you would be interested. I hope that I never have to replace them!

Bob Huighes
Via the Internet

Thanks for the reply. You have the right rods. If you look at your rods they are small on one and big on the other, and mounted reverse of each other. Here’s a picture of the other end to clear things up. The ones on the bottom are for a hardtop. Sorry for the confusion!

I have been restoring ’65-’66 Mustangs for over 30 years. I used to purchase parts from Mr. Mustang (Carl Pendley) and his wife and daughters till after Carl’s death. In the December issue the letter from John Cowart about the torsion rods I wanted to say it wasn’t due to the boot. It was due to the drain track for the rear of the convertible top that interfered with the rods. Also the convertible rods work with all three body styles. I have saved all the ones I have ever removed out of parts cars.

Thanks for the reply. You were smart to hang onto those rods as they are getting scarce. Here’s is what Larry is referring to. This is the drain channel that lies under the back deck panel. It is used on a convertible to draw water away that gets between the top and the deck panel, and isn’t used on a hardtop or fastback. As you can see, with the trunk open the rods are very close, and when you close the decklid they get closer. I used a general term and called it the “boot.” Thanks again Larry!

How do you clean within the cowl area on a ’65 Mustang? We are done wet sanding and all the drops fell in the cowl and they won’t rinse away. Got any secrets?

Name withheld
Via the Internet

The cowl area is a complete pain to keep clean because on the early cars they are welded shut. One solution I found for scrubbing is a paint gun brush. I bend it into a 90-degree bend and the plastic bristles don’t scratch if you are careful. Wrap electrical tape around it so it doesn’t scratch the paint. You can twist the angled end to reach in between the cowl slots. For softer scrubbing I found a rosin flux brush with a narrow handle on it. The bristles won’t scratch, and I put a piece of heat shrink tubing over the handle to keep it from scratching.

As far as cleaners, I like to start with soap and water first. If that doesn’t work I move to a little lacquer and enamel cleaner. Be careful—some paint prep solvents are very aggressive—use a mild solvent. If these ideas don’t work and you are completely done painting (not between clearcoats), WD-40 will break up the white clearcoat residue really well. Depending on what you are trying to get out (dirt, grease) you might try other cleaners. Just remember that it will get washed down the side vents of the cowl and on your paint. If anyone else has any suggestions send them to me! Good luck with the cowl.