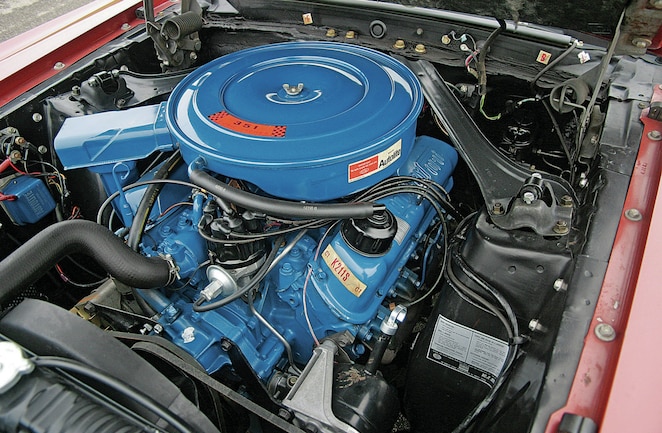 Hello, I have a question about the different colors or finishes on parts for a ’69 Mustang Mach 1. I cannot find any information if there are different finishes for different factories. My car was built in Dearborn. I was looking at the pictures of your Indian Fire Red ’69 Mach 1 and noticed the blue on the engine. What shade of Ford blue would I buy that would be the closest to that? Thank you for all your help.

William Bush
Via the internet

I am restoring a ’69 Mustang Mach 1. The engine is ready for paint and I have found out that DuPont no longer makes Imron 5000 series paints. I’m in need of a paint code for Ford Corporate Blue and a manufacturer of what can be used that is comparable to this product. Thanks so much.

Mike Yoder
Via the internet

For both of these restorations I would recommend using a paint gun with DAR 13358 Ford Corporate Blue. DAR is PPG acrylic enamel; 13358 is the factory mix code for Ford Corporate Blue. If you don’t have access to PPG products the mix code remains the same for other brands as well. I would avoid aerosol cans if at all possible. Durability and color match are often an issue with aerosol cans.

I understand you had a Boss 429 with dual inline induction on display at the Muscle Car Nationals a few weeks ago? My friend said the Boss display was outstanding, one of each color as well as a few factory drag cars. I collect everything Inline/Cross Boss 302, 351, and 429. I was hopeful you could show a few pictures and history on the induction.

I purchased the induction from Chuck Mill in Chicago. Chuck had his ’69 Boss 429 drag car displayed on his ’65 550 car hauler at the MCACN show. Chuck has been an avid racer and professional car guy since the ’60s. I have enclosed a picture of Chuck and the induction on his display engine in his shop. Chuck ordered the carbs in 1973 and still had the original boxes. The intake came from a Holman-Moody-Stroppe employee he met in California in the early ’70s. The intake has a XE number embossed in it and SK numbers etched below the XE numbers.

Can you identify this plastic strap? I removed this from my dad’s ’69 hardtop he bought new in the fall of 1968. We restored the car in 1996 and it has bothered me I did not know where it was used? I took pictures during the restoration but none of the strap; any ideas?

Good thing you kept it all these years. It’s a rare find! The orange strap was used on the parking brake cables attached to the rear drum backing plates prior to final assembly. The strap kept the parking brake cables temporarily connected during the assembly process. It’s my opinion typically the straps were removed when assembly was complete, however I have seen several on ’69-’71 Mustangs over the years. Recently, on a very low-mileage Boss 351, one end of the strap was attached to the short cable and the other end was hanging down with factory sound deadener on the lower portion of the strap. The strap is a nice detail item for sure.