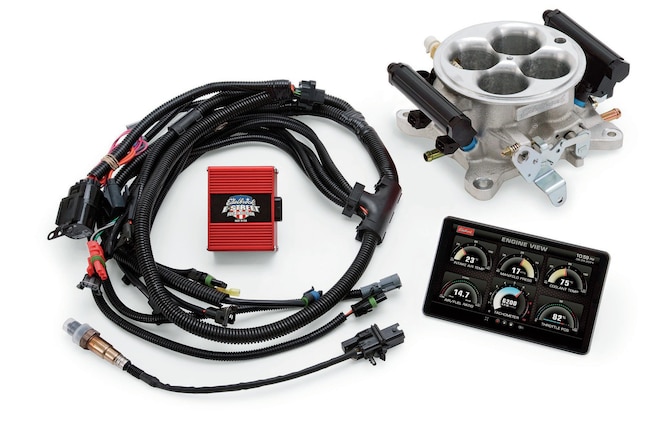 I have owned Mustangs since August 1967 when I came back from Vietnam. I bought a ’65 A-code hardtop with a four-speed and Pony interior. It was Arcadian Blue and I drove from Los Angeles to Pensacola, Florida, in 58 hours with no air or interstate. Since then I have bought and sold (and wish I still had) every one of my Mustangs I have ever owned.

Seven years ago I bought my most recent Mustang, a ’66 hardtop. An A-code, four-speed Pony interior car also Arcadian Blue, and have wanted to make brake, suspension, steering upgrades, and more to it. After looking at the tremendous amount of advertising claims, and since I only have one chance to get it right, I am seeking advice about transmissions, engines, brakes, suspension, and steering upgrades.

At first I thought about putting a Coyote engine in the Mustang with a matching current six-speed transmission. But after a year or two of looking I “think” that I would like to stay with a pushrod engine and install an all-aluminum 408ci Windsor that would give me about 460 hp at the flywheel and 400 hp at the rear tires. I still think a six-speed is the way to go, but maybe an automatic like BMW or Chrysler that are dual-clutch and fast shifting, plus a real automatic function for road trips. Who makes an automatic that would work with the Windsor and maybe a paddle shifter on the steering wheel? In comparing the engines that a couple of companies make is there an all-aluminum Windsor that is a better buy?

For suspension, I am really impressed with Detroit Speed’s Aluma-Frame front suspension with rack-and-pinion, correct motor mounts, big brakes, and wheel/tire clearance. Not sure what would be best for rearend (three- or four-link), but 2½-inch-deep tubs are a requirement for rear tires.

Finally, as you can guess, I would like for my ’66 to handle, go, and stop as well as the ’14 Mustang GTs, but weigh 400 pounds less and have a better front-to-rear weight ratio. I know this sounds like a lot, but any and all direction, advice, etc., would be greatly appreciated.

Robert W. Carter
Via the Internet

Robert, you’re my kind of guy. Did you take the southern route or Route 66? We need to chat. Most of what you have described above is pretty straightforward and doable. And 460 hp in a 408 stroker is very realistic, and most reputable builders can set you up no problem. My advice on this engine build is fuel injection. If you want to match the late-models, you want to run EFI; preferably one with mass air capabilities. Just because you’re running a pushrod engine doesn’t mean you can’t take advantage of modern controls and modern ignition. Check out Pro-M Racing (www.promracing.com/pro-m-efi-engine-management-systems/ford-complete-efi-systems.html) or Edelbrock (www.edelbrock.com/automotive/mc/efi) for their systems.

Transmission: TCI Automotive is retrofitting the GM six-speed for Ford applications (www.mustangandfords.com/project-vehicles/mmfp-1105-tci-6x-six-speed-automatic-transmission) so there may be more choices available when you need to keep the power range up. Most modern transmissions, manual or automatic, are going to be a lot bigger than the Top Loader that is in it now. You’ll be in for some transmission tunnel massaging. Mastershift makes a paddle shifter for early Mustangs; check out the write-up on Mustang-360.com at www.mustangandfords.com/how-to/drivetrain/mdmp-0810-master-shift-paddle-shifter.

Suspension: On a live axle I am kind of partial to the torque-arm setups and there are several out there. I get nervous about some of the front suspensions when they start removing the shock towers, as the Detroit Speed setup does. My advice is that if you pull out a major part of the front chassis stiffening, you need to replace it with something that ties the front back together. Perhaps a front subframe is in order.

So we have power, we have gearing, and we have suspension, so why are we still losing? We don’t have tires. The ’66 Mustang really suffers from not having any room for modern tires, and the patch that a late-model Mustang can lay down is a game changer. We’ve found that 19-inch tires with good P255/40ZR19s will stick so much more horsepower to the road than your P225/60R15s. You are in the right direction with the rear and Autoworks Parts and Detroit Speed both sell a mini- tub that works. To get any kind of rim under there you will be flaring the fenders too. Maier Racing sells a fiberglass flare, or you can make your own if you want to fabricate. The key is you need to get some tire width under there, or all that horsepower won’t have a good way to get to the ground. Good luck with the ’66.