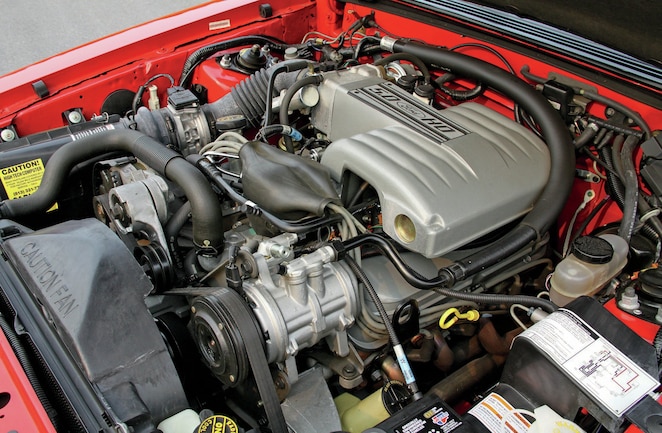 I have a ’91 Mustang notch, but it is just the four-cylinder model. I am thinking about converting it to a 5.0L drivetrain. I have a line on a wrecked ’92 GT convertible I could get for cheap. Can I just swap over the complete drivetrain from the GT to the four-cylinder and not have any issues? The GT is also an AOD car and I really would like to have a manual trans with my swap. I’d appreciate any help you can offer. Thanks!

Dave Milliken
Via the Internet

Swapping the drivetrain from the GT into your four-cylinder notch is truly a bolt-in swap, but we must caution you, it’s not just about the mighty 5.0L engine here. We recommend buying the donor car outright so you have everything you need. Once you get the cars side-by-side you’ll start to see more differences, such as fuel and brake line routing, suspension, brake booster, rear axle, and more that are different between the four-cylinder and the V-8 models. The convertible also differs slightly in spring rates, but should work on the coupe fine. We’d recommend swapping over the complete ’92 drivetrain (engine, trans, rear) along with ALL of the V-8’s wiring (not just the engine management) so that the ’92 “thinks” it is all still there wiring wise. Tape flag or tag ALL wiring as you remove it so you remember what the connectors are for. Once you have your ’91 coupe up and running with the conversion THEN swap your five-speed in. This way you’ll know going in that the car runs and drives fine before doing the trans swap. You can get a complete five-speed Fox conversion kit from numerous sources, including Modern Driveline (www.moderndriveline.com).

I have an ’11 V-6 Premium Package Mustang coupe and I have really enjoyed the car, adding a cold air kit, axle back exhaust, and a few exterior upgrades like Roush quarter window louvers and a billet grille. I really love the ’13-’14 LED “rope” taillights and wonder if they would swap into my ’11 without much difficulty. I heard they will plug right in. Is this true? What are your thoughts on the swap?

Jeff Rogers
Via the Internet

Indeed, the ’13-’14 taillights are one of the most distinctive and well-liked changes to the newer S197 body since the major 2010 body change. Those we’ve talked to who have tried it say the taillights plugged right in for them. The bigger issue is the fact that the ’10-’12 taillights have a deep “V” on their bottom that matches a similar style line on the rear bumper fascia. Though the taillights will bolt into the rear body structure, there will be a gap beneath the taillight due to the ’13-’14 taillight having a much flatter lower profile. We’ve seen pictures of this taillight swap and depending upon the color of the Mustang the gap can be quite noticeable. The only solution to the gap is to swap to the ’13-’14 Mustang bumper cover. That said; the swap isn’t cheap either. The ’13-’14 Mustang LED taillights are currently going for big bucks—try $849 EACH at CJ Pony Parts! That’s over $1,600 for a pair. If the rear fascia gap bothers you then you’ll need to part with another $500 or so for the rear bumper fascia (that needs to be painted), plus the bumper isolator (the foam pad under the fascia). So the conversion—with all-new parts—will run you about $2,500. Hopefully there are a sufficient number of ’13 and ’14 Mustangs in the salvage yards now to make this conversion a little easier on the wallet.

Let us hear from you
Send your late-model Mustang questions or comments to: Late-Model Corral, c/o Mustang Monthly, 1733 Alton Parkway, Suite 100, Irvine, CA 92606, or email us at mustang.monthly @sorc.com.