December 1, 2012
◀National Parts Depot’s latest Fox Mustang catalog is chock full of ’79-’93 Fox hardware, including everything you’d need to get your power door locks functioning again. With over 800 new products, many of which are for the ’79-’86 “four-eye” Mustang crowd, you’d be surprised what NPD has to help your Fox get back on its feet.

Many of us have grown accustomed to the creature comforts of life. From filtered water through your fridge door and a remote control by your side on the couch to power windows and door locks in just about every vehicle made in the past 20 years (excluding those uber-cheap rental cars we all have to endure now and then). So it can be frustrating when one of these comforts goes belly-up without notice. I mean, who wants to get up off the couch and walk five feet to change the TV station (if you can even find the button on your flat screen!)? Seriously though, when a power window or power door lock system goes on the fritz, it affects not only the security of your Mustang, but yours as well.

Our 22-year-old ’90 hatch has been through a couple of replacement door lock actuators over the years but this time things were different. The driver’s side actuator worked fine, though a little slow from age, whereas the passenger door wouldn’t unlock at all from the driver or passenger lock switch. Often, when the actuator seizes, you can’t even turn the door lock tumbler with the key (and yes, you can break the key off in the lock—we have that T-shirt). So we weren’t 100 percent sure it was the actuator this time. We simply had to tear into the Fox’s door and do some simple voltage and resistance checks to verify the failed part or wiring issue and not simply throw parts at it until it works again. 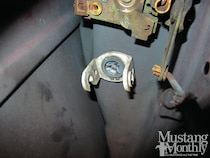 So follow along as we delve into the Fox Mustang’s power door lock wiring, switches, and actuators to see where the problem lies and then you’ll know what to do when (not if) your power door locks go on strike.

Fox Mustang Door Lock Wiring
When diagnosing your door lock issues, you have to understand how the circuit and the switches work. The door lock switches have contacts that are closed when the switches are at rest. This is how the switch can pass through the ground circuit and reverse the polarity to make the actuator move up and down (same concept for your power window switches). The black with white stripe wire feeds power to both of the switches, but the lock and unlock circuits actually start at the driver’s switch and run to the passenger switch and THEN to the door lock actuators. This means that if your passenger door lock switch is bad (or simply removed), then neither door lock actuator will function. When testing the circuit, remember that the actuator power for both doors comes from the passenger switch and the ground for both actuators comes off of the driver’s switch. The ground is located on the driver’s door and is shared with the power window switches. So, if your power windows work, you most likely do not have a ground problem. We have seen one instance where the actual door didn’t ground to the body when open (windows and locks worked fine with the door closed). For that repair, we ran an auxiliary ground wire from the ground screw on the driver’s door, through the door wiring harness, and attached the auxiliary ground wire to the chassis inside the left kick panel. Lastly, the ’86 and older Fox door lock circuits are the same, even down to the wiring colors, but they use a six terminal switch versus the five-terminal for the ’87-’93. However, don’t let that throw you, as the wiring still only uses five of the terminals. Just pay attention to the orientation of the switch in the wiring connector and you’ll see which terminal isn’t used.