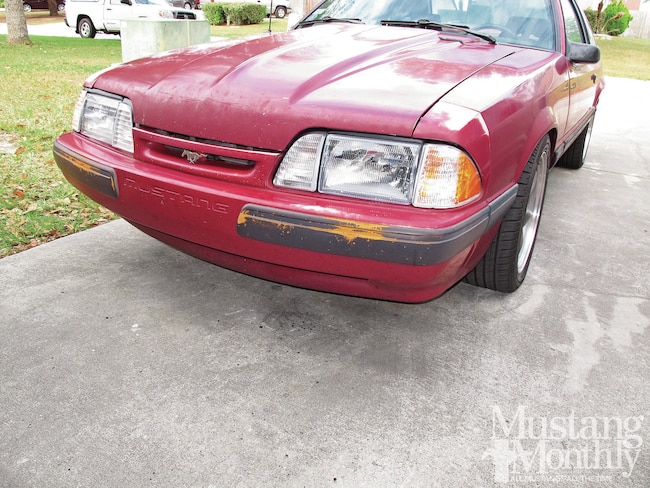 The year was 1987. Ford had just given the Fox Mustang a freshening of the interior and exterior design with a new, more aero and flowing look. The interior featured a rounded dash with gauge "pod" flanked by light switches and a center stack design for HVAC and audio, a huge departure from the "Fairmont" style dash the '79-'86 Mustang used, which was more of a design child of the '70s with its flat face and wide expanse from A-pillar to A-pillar. On the outside, Ford updated the Mustang with their "aero" look that started with the '85½ SVO and Escort models and expanded to the all-new Taurus/Sable for '86. The aero design included rounder front fascias with tucked in/flush bumpers and new plastic headlamp housings that replaced the traditional square glass headlamps. The plastic headlamps were designed flush to the fascia and hood of the car to improve aerodynamics for fuel economy and wind noise as well as give the cars a fresh, modern look.

Fast forward about five years and many of those plastic headlamps became faded or yellowed, looking like they'd been at the bottom of the Atlantic along with the Titanic. Twenty-five years later, it's even worse. Besides the negative vibe, the light output of these headlights is dramatically reduced. This lower light output means you have less visibility during night driving and less time to react to obstacles in the road, such as debris or even a bicyclist/jogger. The main reason this happens to these plastic lamp assemblies is that the clear coating applied to the lens during manufacturing breaks down with sun, bugs, harsh cleaning chemicals, and more. Once the clear coat barrier fails, the yellowing begins. While this is an inevitable situation no matter what kind of car you drive, if you don't catch the issue early on and maintain your headlights with a plastic polish, you'll find you'll need to completely replace the lamp housings.

We're lucky in the fact that the Fox Mustangs, and the '87-'93s in particular, are so popular that restoration and custom parts keep flowing into the aftermarket more than two decades later. When it comes to the aero headlamps of the '87-'93 Mustang, the choices are abundant. From completely stock fluted lenses with amber side markers to one-piece assemblies with LED "halo" or daytime running light (DRL) features and projector beams behind smoke tinted lenses, you have the option of keeping your Fox Mustang stock appearing or giving it a custom look just by bolting in new headlight assemblies.

For our '90 Mustang LX, the time had come for its third set of headlights since it rolled off the line in Dearborn in January 1990. The folks at Latemodel Restoration Supply have plenty of lighting options, from budget to super-trick. We opted for the standard six-piece lamp set to return our headlamps to their former stock glory. Follow along to see how it's done and then go give your Fox some love with a new set of headlamps. You'll be glad you did.

While the LRS headlight offerings are all quality products with different styles/looks to them, they do not include the Ford trademarked oval on them. This is most likely a non-issue for the majority of our readers, but for those of you who show your late-model in a concours class, having that Ford brand logo on your headlights is something judges will certainly be looking for (or should be!). If your original lights are not cracked or otherwise needing major replacement, you might be able to bring your original lights back to near-new quality with a headlight cleaning and polishing kit. LRS sells just such a product (PN LRS-113008HDW; $9.99). With a little effort you can have your original lens looking much better for the judge's scrutiny at your next show. 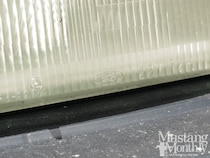 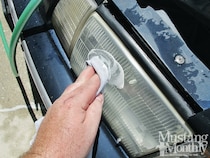 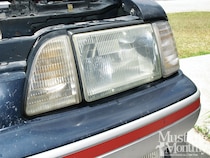 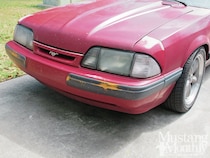 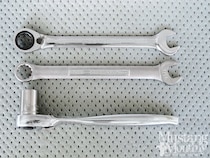 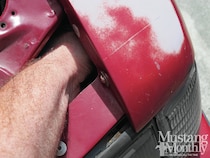 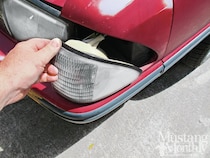 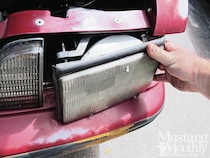 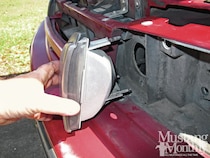 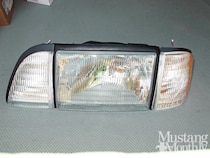 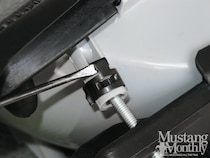 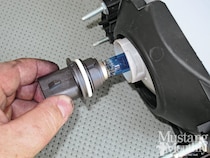 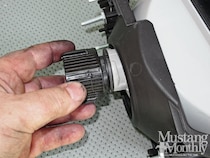 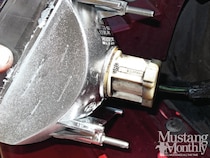 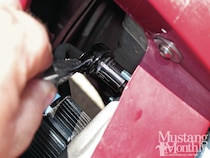 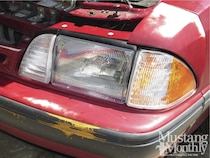 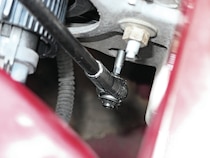 16a We took these before and after shots at dusk to show the dramatic improvement of the clear and focused lenses of our new headlight kit versus the nearly decade old lights we had been running.
16b Not only is the headlight itself brighter and clearer, but the parking and side marker lights are more distinguishable as well.