With Dynacorn's Reproduction '67 Fastback Bodies, You Can Now Build An Entirely New Vintage Mustang From The Ground Up

Miles Cook
May 30, 2007
Photos By: Donald Farr
We stopped in at Dynacorn's Oxnard, California, facility where we saw this pair of fastback body shells in front of a stack of Dynacorn's original full-body project-the '67-'69 Camaro.

The time has come. As Mustang enthusiasts, we now have an additional choice on building a car. It can, of course, still be done as always, which is to begin with an existing car in any condition, from a beater to a gem, and restore it to original or personalize it to your own liking.

The new way is what you see here-an-honest-to-goodness new Mustang body that should be available for purchase as you're reading this. Built by Dynacorn International, this revolution is sure to create waves in the Mustang hobby. Restomodders and race-car builders will likely see the benefit of beginning with fresh sheetmetal, while purists may worry about the ramifications of rebodying rusty cars or plain out faking valuable models such as the Shelby GT500 and '68 Cobra Jet GT.

We're not going to get into that here. Rather, we want to show you what the bodies look like, what features they have, and what they cost, which is going to be about $15,500 plus a $495 crate fee.

At this point, the primary body available from Dynacorn is the '67 fastback, with '68s offered on a limited, special order basis. Basically, the only difference between '67 and '68 bodies is the rear quarter-panel just behind the door-'67s have provisions for the dual faux scoops, while '68s have a molded-in scoop. Dynacorn says '68 bodies won't have provisions for '68 side-marker lights. The choice to add those or not will be left up to owners and builders.

When we visited Dynacorn last March, four '67 fastback bodies were already in builders' hands-Year One, AutoWorks, Classic Design Concepts for Ford Components Sales, and Gateway Classic's build for rocker Sammy Hagar. Dynacorn was eager for feedback regarding fitment of the other parts needed to complete the project.

For the foreseeable future, Dynacorn's Mustang efforts will focus mainly on these fastback shells. Down the road, we might see other fastback body styles from the '69-'70 era as well as '65-'66. Don't expect much in the way of coupes, though convertibles might be produced eventually.

At this point, it's a landmark development to have '67 shells available. They're sure to be the basis for many project cars for years to come.

Steak With the Sizzle
We asked fellow Mustang enthusiast and Dynacorn sales manager, Larry Brogdin, to fill us in on some of the technology incorporated into the Dynacorn '67 Mustang fastback body shells. He gave us so much information, we decided to give him the floor. 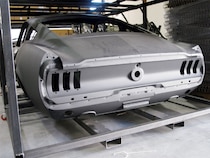 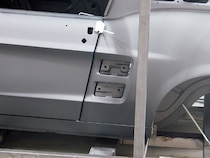 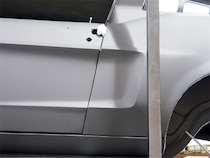 "The metal used in the making of these bodies is modern 1006 steel, which has lower impurities and controlled carbon content. The more consistent metallurgy allows the different size (thickness) steel to weld together with better penetration due to such a similar structure.

"We also use modern welding equipment and techniques that do a superior job of permanently bonding the metal together. We have had tests done that show the metal fails before the welds, and we already know that the metal is better to begin with. There are at least 20 percent more spot welds on our body shells than Ford used to assemble the original cars. In places where we feel wire welding is needed, we use that method instead of spot welds.

"On the occasions where SAE gauge metal doesn't transition to exact thickness of metric equivalents (by 0.1mm increments), we automatically round up to the next tenth of a millimeter. In many cases, such as with the floorpan, we add an additional 0.1mm of thickness after the rounding up. That's on a large structural part that adds rigidity to the entire unibody. We have also added to the roof panel, firewall, and quarter-panels using the 'round-up-plus' technique.

"We have made certain parts of the body considerably thicker because we thought it would be a good thing to do. Throughout the years, we have seen a lot of metal failures. Some were because the metal wasn't strong enough in a certain situation. Areas such as the trunk drop off, the rear crossrail, and the radiator support weren't very thick from the factory, but they are on these body shells.

"We also applied structural improvements from subsequent years and retrofitted them to the Dynacorn '67. The dual torque boxes and reinforced trunk-hinge arms are from the '68 models. The extra-wide-and now extra-thick-big-block-type shock tower braces from '69-'70 are installed on the shock towers to help prevent cracking of the towers. We also use the second-design door hinges, not the early '67-style.

"Another key upgrade is the one-piece seat platform in the floorpan. The part is designed after the convertible seat platform that runs from rocker panel to rocker panel and is welded all the way across the transmission hump. With the added steel thickness, this part becomes the stoutest gusset in the whole body and ties the rocker panels together at the center of the car."