Miles Cook
February 27, 2007
Our Highland Green '69 Mustang project car has relatively decent paint on it. That said, there are some minor rust issues-the most obvious is at the lower right corner of the driver-side taillight.

There are legions of nice daily-driver Mustangs still around. At the same time, many are far from perfect. An ideal example is the '69 fastback project car we've used for articles for nearly four years. This car is fundamentally solid and its unibody structure is almost devoid of rust, but it's not 100 percent rust-free. The damage is not extensive-it's enough to warrant spot repair work, but not enough to require repainting the entire car.

With that in mind, we took our car to a body shop to have the most visible rust issue examined. Of all the external areas on the car, the taillight panel needed the most attention, a very common problem in '69-'70 Mustangs. There are other areas of minor rust for repair in the future, which may be fixed when we repaint the entire car.

After final color sanding and buffing by the crew at Crook Brothers and reinstallation of the taillights, we have a perfect and undetectable repair.

Our repair was done at Crook Brothers Auto Body in the Los Angeles suburb of Downey. We've seen several complete paint jobs done by them, and the cars coming out look great. Look at what was done during the course of three days. You'll have a clearer picture on the best way to have minor rust removed from your vintage Mustang. 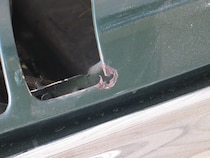 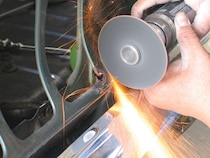 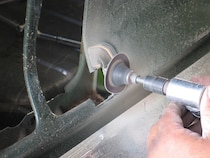