Reproduction Cowl Panel - How To Replace a Cowl Panel

The days of cutting, welding, and otherwise repairing rusty, old cowl panels are over. Well, at least for '67-'68 Mustang owners. Dynacorn International has released brand-new sheetmetal reproductions of the upper and lower cowl panels for '67-'68 Mustangs, which means you can trash the old leaky panels and replace them with Dynacorn's fresh sheetmetal, available from National Parts Depot.

Cowl-panel repair has been the bane of vintage Mustang owners for decades. Leaves, pine needles, and other trash can enter the cowl through the exterior vents and accumulate around the water dams at the corner vents inside. Rain water adds moisture to the inaccessible mess, resulting in rust, especially at the dams, which eventually allows water to enter the interior through the fresh-air vents. Many a Mustang owner has been surprised by wet carpet after a rainstorm or even a car wash.

Because the cowl panel is an enclosed assembly, repairs are difficult. Temporary repairs like plastic cowl-vent caps and fiberglass replacement dams have been available for years. More permanent repairs have meant cutting open the cowl panel to replace the dams and surrounding sheetmetal. According to Matt Simmons from Classic Creations of Central Florida, he can spend up to a week repairing a rusty original cowl.

Dynacorn's reproduction cowl panels for '67-'68 Mustangs are a welcome relief for Mustang owners with rusty, leaking cowls. All brackets are included, so there's no need to cut them out of the old panels for transfer to the new panels. When welded together, the upper and lower panels create a brand-new cowl-panel assembly.

Of course, even with completely new panels, the replacement is not a job for the typical weekend mechanic. Removing the original cowl requires removing fenders, cutting out spot welds to remove the old cowl panel, and welding the reproduction panels together before the final alignment and welding. You'll also have to paint the upper panel to match the car's exterior because the cowl forms the sheetmetal between the hood and windshield. It's a big job if you're performing a cowl-panel R&R on a complete car, but less time-consuming and labor-intensive if you do it during the course of a restoration.

As you've likely heard, Dynacorn is working on a complete '67 Mustang body, which explains why the '67-'68 cowl panels are available before '65-'66. According to National Parts Depot and confirmed by Classic Creations of Central Florida, Dynacorn's lower panel can be adapted to '65-'66 Mustangs, although the shape is not quite correct because it's made to clear the '67-'68 Mustang's underdash pedal support. However, that area is not visible when the panels are welded together as an assembly and installed. 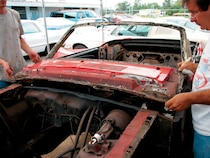 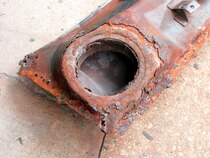 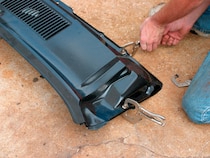 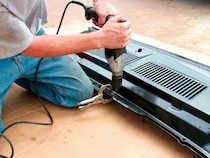 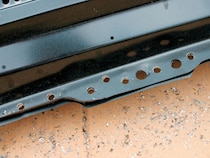 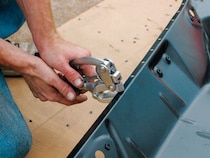