Putting the Stride Back in Your Slide

One of the biggest problem areas of classic Mustangs is their poor-quality side windows: They can be difficult to roll up and down; they don't always seat firmly when they're rolled completely up; and sometimes the darned things just fall down inside the door, irretrievably lost unless you pull the door panel for a closer look. These windows are also difficult to service, which is why most of us avoid them like a tax dodger avoids the IRS.

But take heart. We're going to cover '65-'73 Mustang windows, their most common ailments, and how to fix and adjust them. Remember that Mustang windows didn't function well when they were new. In fact, they were the subject of many warranty-service appointments. So, what can you do to make the most of your Mustang window experience?

Believe it or not, Ford understood its own window shortcomings. When the Mustang was introduced, it had a complex window mechanism consisting of two articulating units that interacted with each other to run a single piece of glass up and down inside the door. By 1973, the Mustang's window mechanism had become a simple matter that was easy to service and maintain.

The Mustang's first two years witnessed the mother of all window mechanisms. Actually, this mechanism is easier to operate than the unit that followed in 1967-'68. Windows on a '65-'66 Mustang glide up and down with ease when properly adjusted. So what goes wrong with '65-'66 Mustang windows? Mainly, window regulator bushings fail, which impedes proper operation. But window regulators can also fail due to circumstances beyond their control. When windows bind in their tracks from lack of lubrication or poor adjustment, we're inclined to force the crank, which ruins the regulator. Regulator bushings fail, followed by the gears. Then we sit there trying to crank a window that doesn't have a prayer of working. 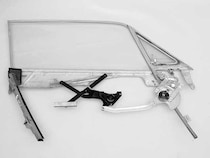 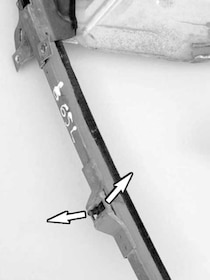 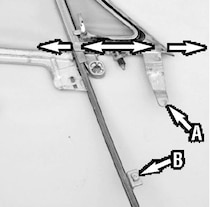 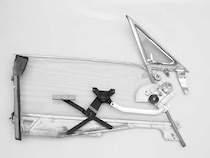 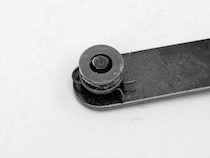 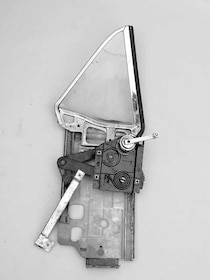 Mustang window mechanisms became less complex with each generation. For '67-'68 models, Ford incorporated the scissor mechanism into the window regulator, eliminating the separate scissor. This step, however, made '67-'68 windows harder to roll up and down. The key to smooth operation is lubrication and proper adjustment. Although '65-'66 window mechanisms are more complex, '67-'68 windows are more frustrating to adjust and maintain. Probably one of the most obvious problems is '67-'68 door windows that get into the rubber weatherstrip at the top of window travel, pushing the weatherstrip out. The only solution is to drill and screw the outer weatherstrip, which gets it out of the way of the window. The clips in the weatherstrip don't work well, making screws necessary. Quarter-window assemblies for 1967-'68 remained much the same as they were in 1965-'66, with larger rollers for smoother operation, and an integral stop, which eliminated yet another part. 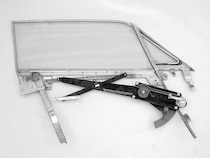 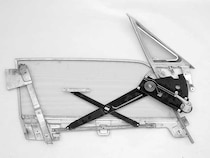 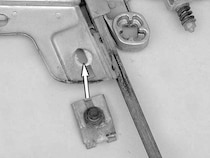 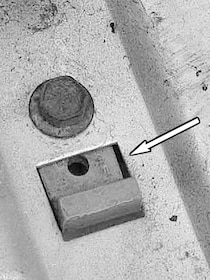 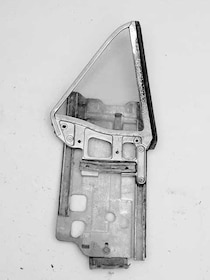 Better window mechanisms were among the many engineering improvements made for 1969. Inside cumbersome, frustrating window tracks and wing-window assemblies, Ford went to dual tubular window glides, which served both as tracks and single-point adjustments. Instead of a separate sliding idler like we find in '65-'68 models, 1969 saw the incorporation of an integral idler built into the window regulator. For 1969-'70, window operation is simple, with easy adjustments that don't require door-panel removal.

When these windows don't operate properly, the tubular glides are usually to blame. Plastic or nylon bushings in the glides wear out or crumble, causing the window to bind. These glides need a lot of white grease and WD-40 for smooth operation.

One engineering shortcoming for 1969 and early-'70 was glue-in window glass. The glue deteriorates, and the glass comes loose from the brackets tied to the tubular glides. The most popular solution is to switch to the '70 bolt-in windows, which aren't always easy to find these days.

Quarter windows for 1969-'70 aren't much different from ones for 1965-'68. They sit in a track that can be adjusted up and down and in and out at the bottom to control window angle.

An Ever So Subtle Difference

Ford refined the Mustang's windows dramatically in 1971 by eliminating one of the tubular glides and reducing the number of adjustment points to two. The total number of stops was reduced to three--one at the bottom and two topside. This design became the standard for Ford windows and remains in use today.