Have you ever walked through a Mustang show, looked at a nicely restored ride, and noticed that something didn't seem right with its appearance-more specifically the emblems? It's an annoying observation. The emblems are either too high, too low, too right, too left, backwards, or just plain crooked. Whenever we see this, we have to wonder why the owner/restorer didn't go the extra mile to ascertain correct emblem positioning. And whenever we study stock, original, unmolested examples, we have to wonder what Ford was thinking when the cars were assembled. Some examples are worse than others.

Whenever we look at a stone-stock '68-'70 Shelby Mustang, for example, we have to wonder just how intoxicated the assembly worker was when he or she installed the SHELBY letters on the decklid. Have you ever seen this? We have yet to see a Shelby Mustang with its emblems and letters correctly positioned; it was a factory shortcoming that leaves a lot of enthusiasts baffled.

Did you know that the assembly workers at the San Jose plant performed a terrible job of emblem and letter positioning from 1965 to 1968? Think we're kidding? The next time you're at a show, look at the cars and observe the emblem positioning on Metuchen- and Dearborn-built Mustangs, then look at the San Jose crop. All of the San Jose front fender and rear deck emblems and letters are crooked. Decklid lettering on '67-'68 San Jose-built Mustangs are as crooked as Washington D.C. politics. Yet most of the time we don't notice them unless we look closely. 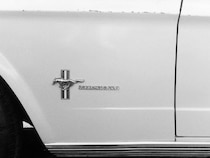 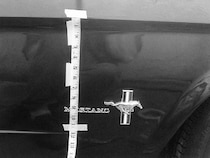 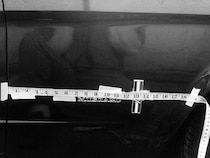 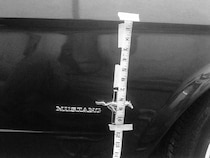 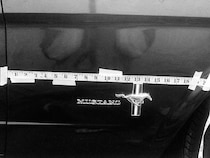 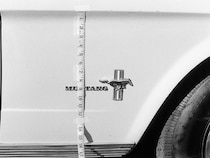 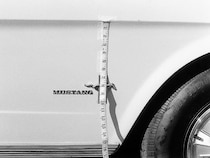 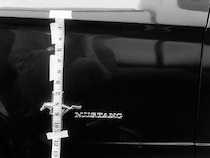 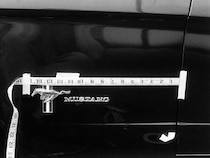 We sampled a broad spectrum of Los Angeles-based Mustangs with Dearborn- and San Jose-build origins. Despite San Jose's reputation for sloppy exterior workmanship, we found some Dearborn cars with crooked letters on '65-'66 GT models. We're still looking for patterns among the assembly plants when it comes to emblem and letter positioning. And truthfully, we don't have a complete understanding of the entire picture yet.

The Hole Truth
Letter and emblem placement is more than just proper positioning of pinholes. There's the peculiar nature of human sight called the optical illusion: Things aren't always what they seem. Sometimes letters look crooked when they're not. And sometimes they look off center when they're dead perfect. The longer you stare at them, the more crooked they appear. This is where we have to be careful during the measuring and drilling process. Accept no less than your measurements. And don't be afraid to measure the surface repeatedly until you're confident of the measurements.

If you have letters or emblems that won't line up, try several until the proper fit is achieved. Sometimes it takes numerous tries before you find that perfect fit. If you run into the same problem with reproduction letters and emblems, try a different brand or opt for good used pieces to achieve a perfect fit.

Generation One
During the first two model years, Mustangs rolled off the assembly line in two ways: standard and GT. We see a lot of restored Mustang GT models with crooked letters in the middle of the GT stripe. We'll show you measurements from politically correct examples, but let's look at standard '64 1/2 and '65-'66 examples first.

'65-'66 GT
This one tends to stump us because we see a lot of variations in those seven little letters on the front fenders. GT badge positioning is quite consistent. It should line up with the M on the left side and the G on the right side. The great challenge for restorers is positioning the MUSTANG letters correctly within the GT stripes. This takes an exceptional eye for detail and asymmetry.