Add A Set Of Mini Tubs To Your Mustang And Cram A Bigger Tire Underneath It.

Traction Is critical during rapid acceleration. Without it, our Mustang's drive tires won't stay glued to the pavement. Instead, the tires will spin, and the car won't accelerate quickly.

Over the years, MM&FF has covered many different suspension upgrades to help your Mustangs and other fast Fords work better at the track and on the street. Nevertheless, there comes a time when you need a tire with more width and overall diameter to get the required traction.

Mustang owners are restricted in tire options due to the rather smallish wheel tubs on most late-models. The Fox-bodies are worse off than the SN-95 models, while the S197 Stangs seem to have plenty of room in the back. In addition to improving traction, many Mustang owners love the look of a lowered ride, and that's another tough thing to accomplish with a stock suspension in your Fox Ford. The answer, as we see it, is to add mini tubs that will allow larger tires as well as a lower ride height. 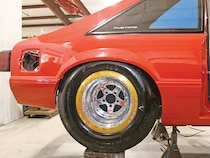 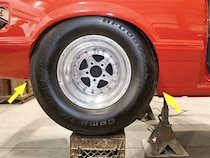 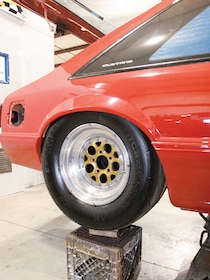 Replacing the stock wheel tubs with mini tubs isn't just for hard-core drag racers anymore. We've noticed a trend, with more and more street enthusiasts utilizing this modification, as well as road-racing car owners. Adding larger tires and lowering the ride height gives a better stance and aggressive appearance, even if you aren't competing for a heads-up championship. The larger wheel tubs allow taller and wider rear tires along with the ability to lower the vehicle substantially. The best part about this modification is that you can do it at home, or just pay a shop to handle the chore.

We chose the latter and showed up at DMC Racing (Halifax, Massachusetts) to modify the long-lost Project X-Rated, our own Fox flyer. DMC routinely performs this modification for street and race cars and, in addition, offers a do-it-yourself mini-tub kit specifically designed for Mustangs, which sells for a reasonable $130, plus shipping.

Mini tubs are designed for use in stock framerail cars and can take up a weekend for installation, depending on how elaborate and fancy the finished product needs to be. If you're going to tackle it yourself, be sure to have some heavy-duty equipment, including a welder and a variety of hard-core cutters. 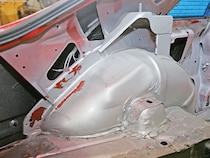 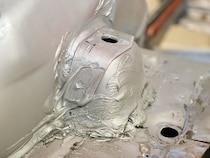 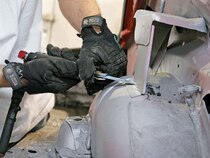 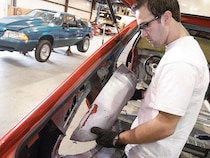 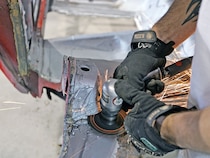 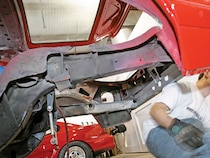 It's necessary to remove the entire rear suspension for this conversion. Dan MacPherson of DMC Racing says, "We normally add rear coilover shocks when we do the mini tubs. If the customer wants to keep the stock shocks and springs, then we build a custom upper mount for the shocks to bolt to." The reason for the rear shock conversion is that the upper mount is removed when the tub is cut out and the framerail sectioned for tire width.

We were amazed how quickly the wheel tubs were removed once the interior panels were out of the car. DMC's Dan Rondeau and Michael Guthier quickly tore into our '90 Mustang LX. Before we even had our camera gear setup, one tub was cut out, and they were waiting on us to start on the other. The Stang featured in this story is scheduled to receive rear coilover shocks, which were coming at a later date. The mounts are being built into the rollcage, so we would be unable to get the Mustang back on the ground at the conclusion of this story.

Due to the Stang's future status as drag-race superstar, the 8.8-inch rearend was dumped, and DMC sized up a custom 9-inch combination. The 9-inch housing specs come in at 49 inches, end-to-end, and it's the narrowest we could have gone while still retaining the stock-style rear-suspension setup. Strange Engineering built the rear and added a back brace to help stiffen it up for brutal and torturous action. Strange also added a set of lightweight brakes, 40-spline axles, 3.55 gears, a spool, and an Ultra Case centersection. It represents the ultimate rearend setup found in True 10.5-inch and Drag Radial racing categories. 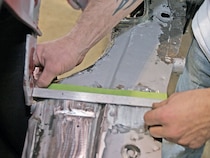 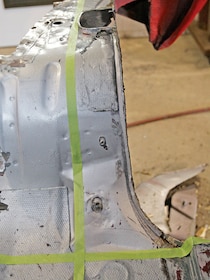 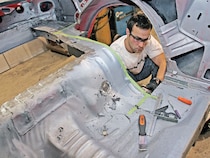 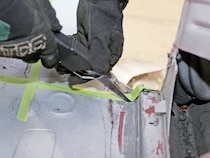 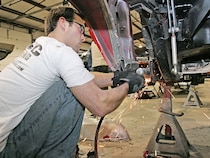 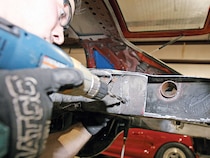 This rear's end-to-end size permits the use of 15x12-inch drag-race-style rims with a 5-inch backspacing. The larger wheel tubs enable us to fit 29.5x10.5-inch slicks without any clearance issues. MacPherson told us that it was the largest tire that fits without trimming the body. The mini tubs can handle tires that check in at 30x12-or basically 29.5x10.5W slicks or the popular 315/60-15 drag radials. The only requirement is minor trimming of the lower portion of the body.

Street enthusiasts can benefit from mini tubbing their Mustang simply for great looks. A narrowed rearend permits the use of a wide wheel along with a smaller backspace. The less backspace on the rim, the deeper the dish (area from outer lip to the center-section of the rim), and this just looks tough. A pair of beefy tires, or rubber-band-sized ones, can be slung onto a set of 18s or 20s, fit comfort-ably, and look proper in a Fox-body or SN-95. In the end, cutting out the puny, old tubs and installing a larger set will undoubtedly enhance the appearance of your Mustang and add quite a bit of traction, too.

Strange Rear
The ultimate rearend is the Ford 9-inch, and we tossed the 8.8 in favor of one. Strange Engineering was tapped to build us a fortified and narrowed 9-inch housing. The company cut down a housing and added a back brace. It was then filled with some of the strongest parts the company makes. Strange offers complete bolt-in rearends as well as custom-fabbed ones, such as the one shown here, for all applications.