How to Fabricate Push-Button Door Handles 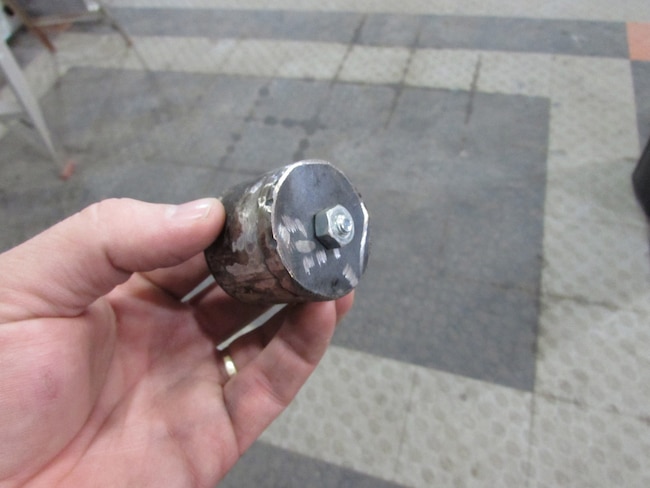 Every so often, a new car will come out with fancy, seemingly new technology that, in reality, was already attempted in the '30s, '40s, or '50s. Take the push-button door handles from the Lincoln Zephyrs of the 1930s and '40s for instance. Perhaps the technology and the consumer from those eras simply weren't ready for the ideas and the design failed. Nevertheless, this technology has resurfaced as a desirable retrofit into classics.

Instead of the traditional twist-style handles, Lincoln used a simple push button to operate the latch (much like the thumb button on most cars without the handle), with a heavy spring in the doorjamb to push the door open. Today, these buttons are used on traditional custom builds, but rarely seen on anything newer than 1955. As the adage goes, everything is new again, so when it came to door handles on Red Dirt Rodz '62 Mercury Comet wagon, they knew what needed to be done.

Unlike the Lincoln buttons, which have a ribbed escutcheon that stands out, the buttons on the Comet are flush, matching the curve of the door. This was done to give the wagon a sleek, shaved-handle appearance, without the inherent issues of shaved handles. Because this car was built to spend time on a road course, shaved handles are not the safest idea. The buttons eliminate the issue of opening a door without electricity, while still maintaining the shaved look. In fact, it is hard to detect the buttons unless you are looking at the door straight on.

The process used to build these buttons is quite simple, with only a few components required. The hardest step is to fabricate is the button. We used a piece of billet aluminum bar stock and turned it down on the lathe, a process any local machine shop can perform. The button pocket was made from 1.5-inch diameter exhaust tubing that was left over from a header kit. The aluminum pucks were turned to 1.437-nch, for a tight, but smooth, fit in the pocket. The other parts you need are 3, .25-inch-20 bolts and a matching nut, 2.5-inch No. 10 machine screws, small diameter springs from a hardware store, and some flat sheetmetal to close each side of the tubes.

Tools required for this project include a welder, drill, die grinder with a fine-tooth carbide burr, handtools, belt sander, and a vise. If you do not have a lathe handy, visit a local machine shop to help turn the bar stock.

The Comet is a four-door, and the front door latches lined up with the original handle hole perfectly. However, the rear doors used an offset lever on the handle, so to make the buttons work we welded an extension the rear door latch mechanism. This took a little patience to get it just right, but the added length worked out pretty well in the end.

The most frustrating part of fabricating the buttons is adjusting them to operate smoothly without binding, and popping back out when the latch is released. Once everything was set, the latch bolt and alignment screw were set with medium thread locker to ensure they did not come out of adjustment. The new buttons operate smooth, give the Comet a sleek look, and still function via a keyless entry system.

The door handle and locks were removed from the door, leaving the latch installed. The lock and handle bolt holes will be welded up, and only the main hole will remain.
We took measurements from the other door skin to the latch lever. Use the deepest measurement without depressing the lever to determine the max resting depth.
The button pockets were created using 1.5-inch header tubing and a piece of 14-gauge sheetmetal on one end. The center was drilled out and a .25-inch 20 nut bolted on and welded in place.
We created the buttons using some 1.5-inch aluminum bar stock turned down to 1.437-inches (1-7/16-nch) x 5/8-inch diameter and chamfered the edges.
Each puck was centered in the vise on a drill press and drilled with a 7/32-inch drill bit to a depth of A half-inch.
Next, we stepped up to a 3/8-nch bit and drilled in 1/8-inch to create a recess for the spring.
The puck should look like this when you are done. The recess locates the spring and allows it to be fully compressed in the pocket.
Each puck was then tapped with a quarter-inch-20 bottoming tap. You must use a bottoming tap in the short blind hole, as a regular tapered tap or plug tap will not reach the bottom.
The puck and pocket assemblies were bolted together and loaded into the vise on the drill press. Each assembly was drilled for the No. 10 machine screw.
This part is critical for proper fitment. Each assembly was stamped with a number on both the puck (inside) and the pocket (outside) so they do not get mixed up.
Here is the basic assembly as ready for fitment in the car. The nut has been drilled out, removing the threads, so that the bolt slides through it easily. A bronze bushing could be used to make it slide easier.
The puck is set to fit flush with the pocket before installation.
Each assembly was positioned on each door and traced with a marker. Positioning is very important, because you want to ensure the buttons are on the same line on the car. Even a minor misalignment will be noticeable.
The hole was opened up using a die grinder with a fine carbide bit. Don't hog it out; go slow and check your fit several times during the process.
Once the pocket drops in, we held it in place with a magnet. Note how one side is flush, the other sticks out. This will be ground flush after welding. The same contour will be applied to the button.
We stitch-welded the pocket to the door, taking care not to put too much heat into the metal, which will warp it.
Once it cooled, the welds were dressed with a flap disc on a grinder. The flap disc reduces the overall heat and leaves a better finish versus a traditional grinding disc.
Inside the rear door, you can see the latch offset. We have to raise the lever and move it back slightly to contact the bolt.
We used an L-bracket cut to size to make the transition, which worked quite well.
Now that the buttons function, we can get to the contour. Each button was sprayed with Dykem machinist dye (available at any welding supply store) and assembled into the door. Next, they were set for maximum height. The entire button should sit slightly proud of the doorskin to get a good scribe line all the way around the button.
We traced the contour of the door with a scribe to give us the exact shape of the button.. Make sure that the bodywork is completed before attempting this step, as you need the final shape of the door for a perfect match.
Each button was removed and threaded onto a long bolt. Using the belt sander, each button was shaped to match the contour. This requires trial and error fitment, just like the door pocket. Don't sand it all off at once, take your time and check the fit as you go. When you are done with the sander, a die grinder with a household Scotch-Brite pad was used to smooth out the sanding scratches.
Before painting the car, make sure that everything fits and works as needed, as making adjustments after laying paint could be a serious problem.
The final result is a flush-fitting push-button that looks and functions great. The buttons were powdered-coated in gloss black to make then stand just enough to catch your eye against the semi-gloss black paint on the body. 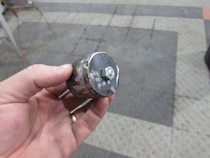 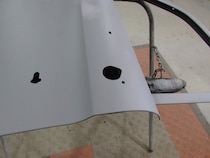 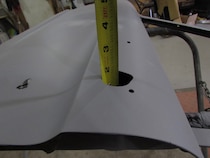 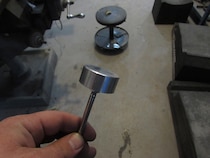 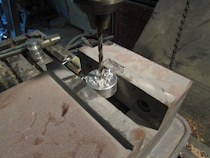 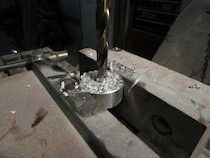 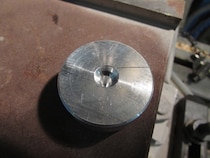 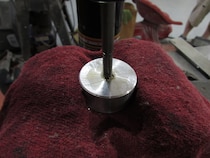 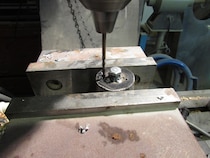 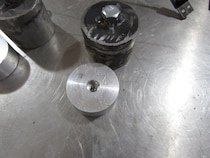 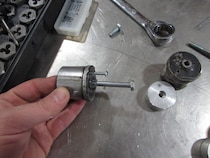 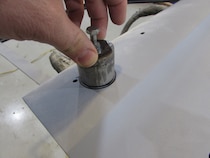 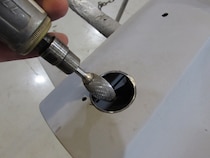 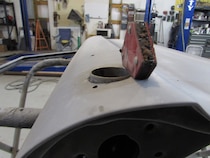 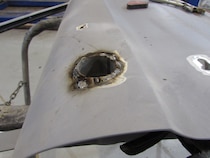 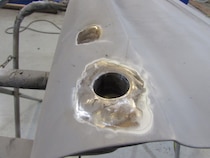 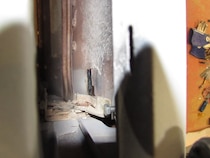 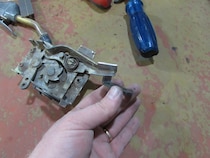 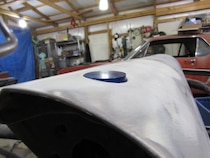 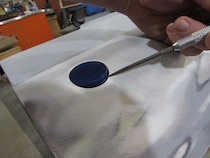 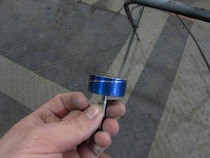 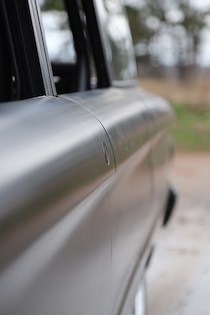