For the '67-'68, Getting It Right Becomes More Challenging

In the previous installment, we showed you how to correctly position '65-'66 Mustang body emblems and letters based on a sampling of Dearborn, San Jose, and Metuchen-built units. This month, we're doing the same thing for '67-'68 Mustangs. Like the '65-'66 Mustangs, it appears Dearborn and Metuchen have it over San Jose for accuracy. Most of the undisturbed '67-'68 samples we found from Dearborn and Metuchen enjoyed crisp letter-and-emblem accuracy. San Jose's were consistently poor with crooked letters on '67s and M U S T A N G script that ran uphill. If correctness is your objective with a San Jose unit, your restoration should possess those crooked letters as they came from the factory. If you're more concerned about appearance, follow our directions for best results.

Generation Two
Like the first two model years, second-generation Mustangs were offered two ways: standard and GT. For the '67, there were two GT variations: GT and GTA. Among the samples we examined and measured, we found variations with original factory cars. San Jose-built units were among the greatest variations. Standard '67 Mustangs have crooked front-fender letters; ditto for the decklids. Standard '68 Mustangs have M U S T A N G script that runs downhill on some, but not all, San Jose units. The sidebars below show some of the best examples we found.

'67: The Last Year For Block-Style Letters
The '67 Mustang is undoubtedly the most challenging for the same reason as '65-'66 GTs. Spacing on these seven tiny letters is critical and mandates close attention or the fender will look like hell. We found a factory original example at Mustangs Etc. in Van Nuys, California. Here are the results. 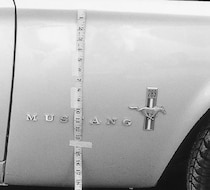 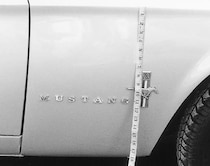 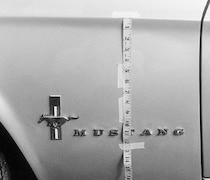 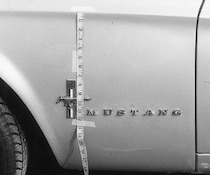 '67 GT/GTA: The Only Year For Two Versions Of The GT

'68: The First Year Without The Ford Lettering
The Mustang differed somewhat for 1968, with a M U S T A N G script on the front fenders instead of the more traditional block-style letters common in 1965-'67. Rear decklid lettering remained the same. The F O R D block lettering on the hood's leading edge was phased out for the '68.

'68 GT: For This Model Year, GT Designated Both Manual And The Automatic