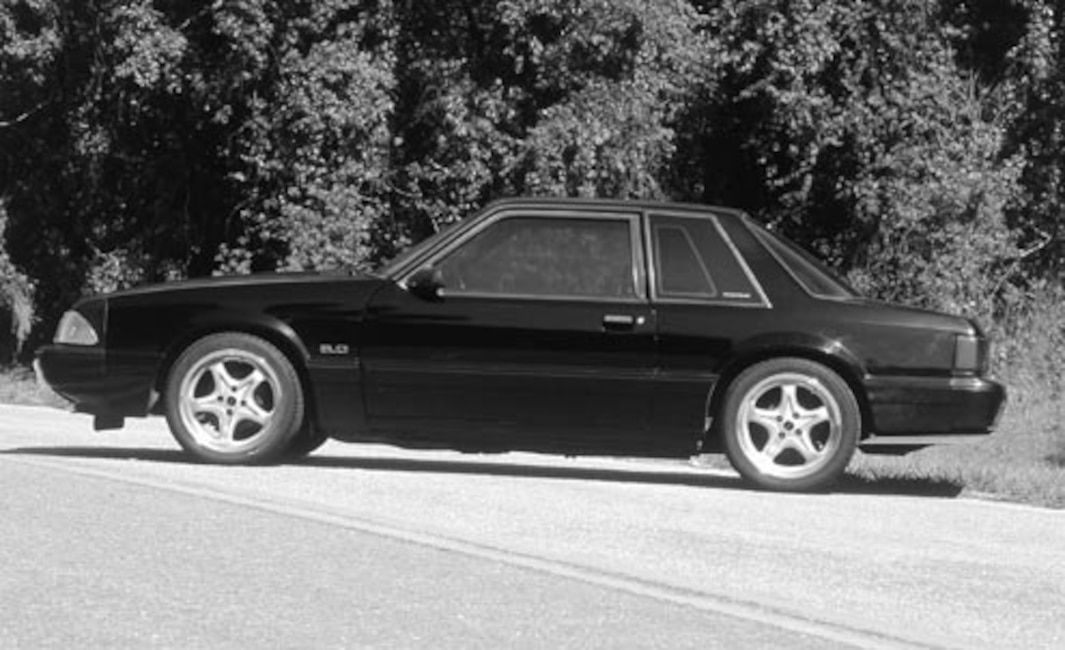 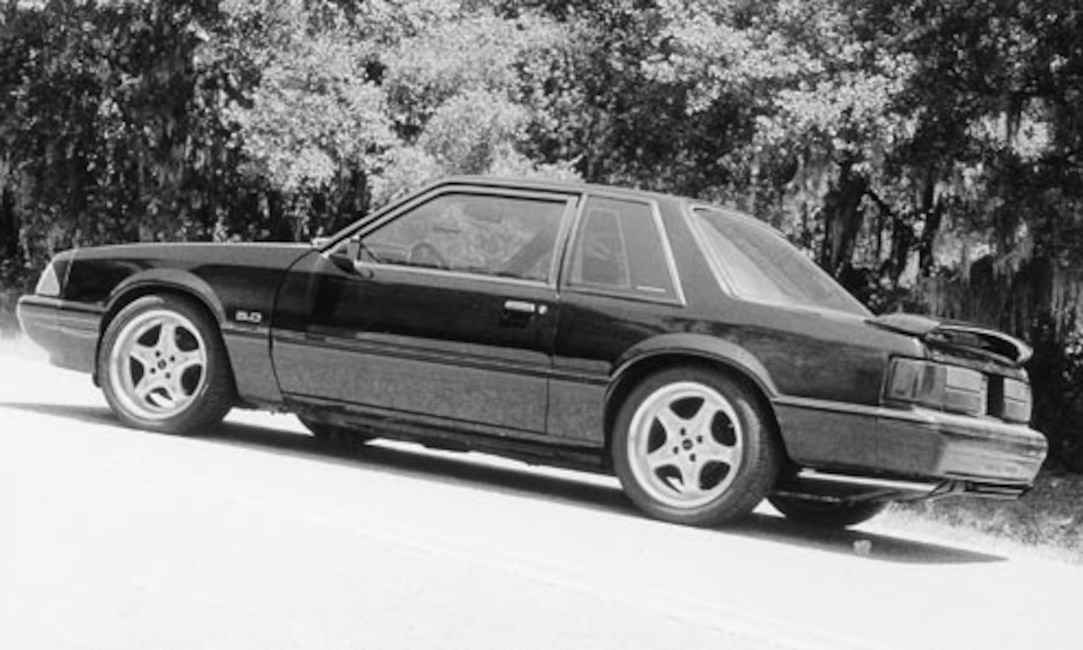 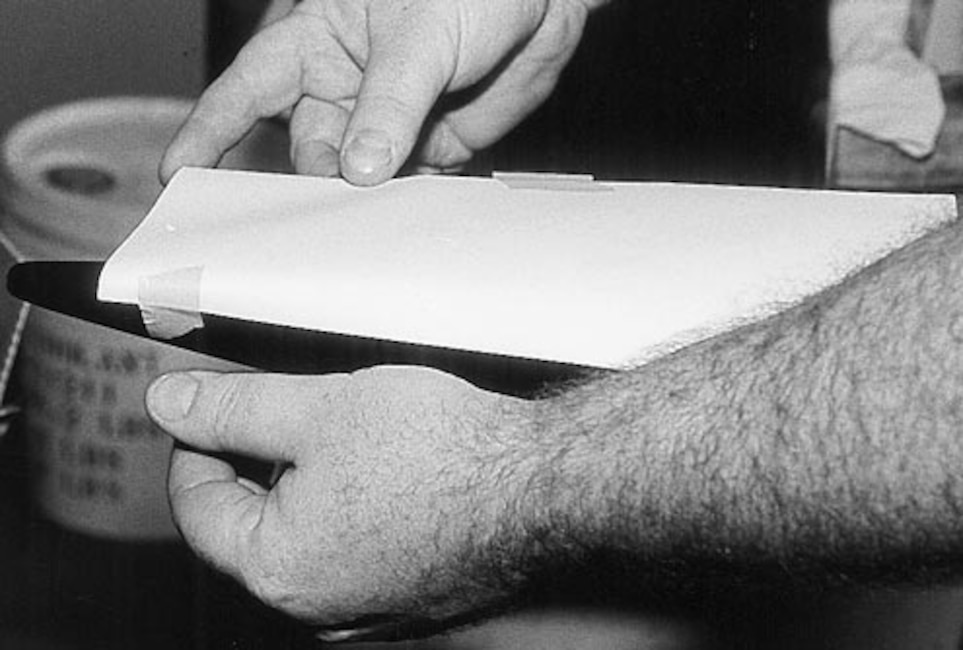 After having our wing painted to match our ’93 sedan, the first step was devising a template or an alignment tool for the mounting holes. Paper was gently taped down to the backside of the wing pedestals. 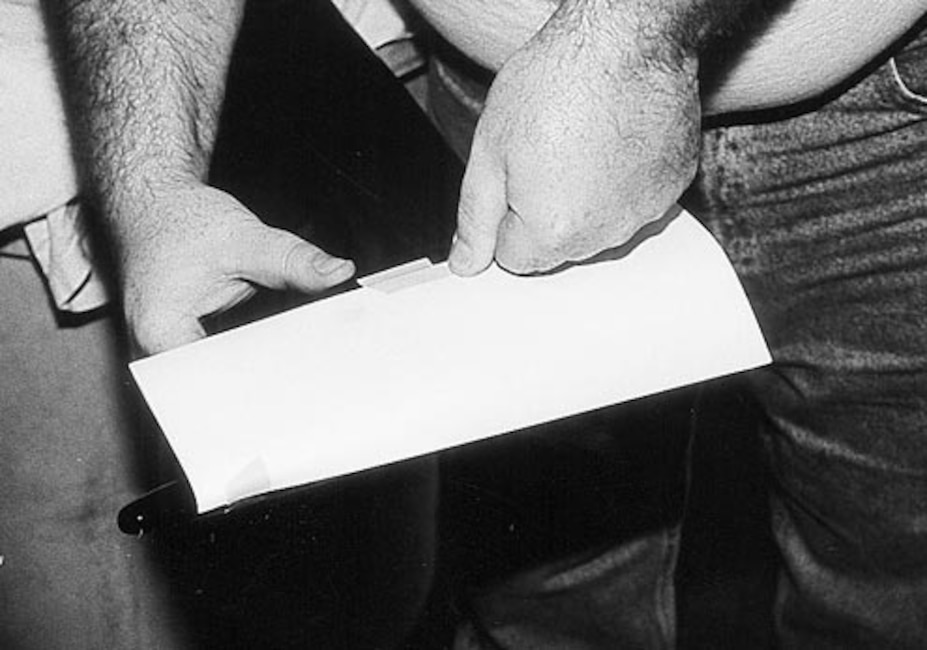 The four mounting holes were located by using thumb pressure over the holes to make a preliminary indication of them. 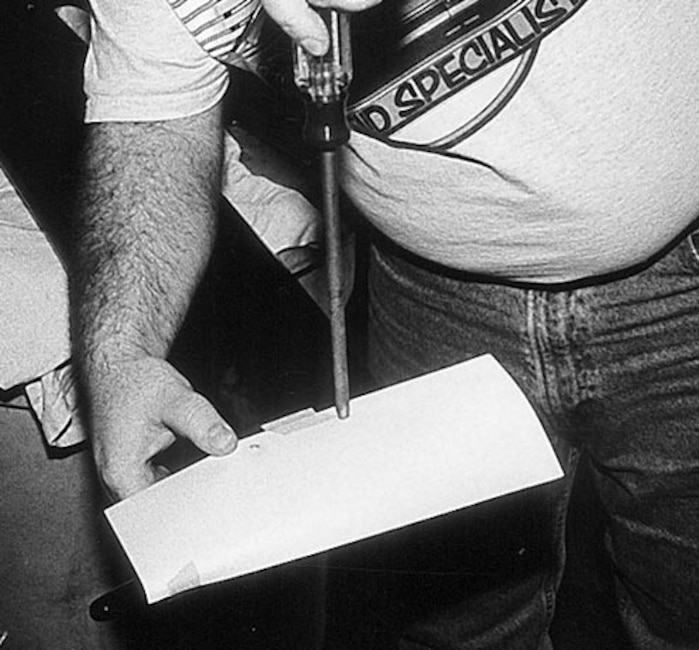 Using a large, blunt-tipped object, such as a Phillips screwdriver, holes were carefully made in the paper template by applying downward pressure and rotating the tool. 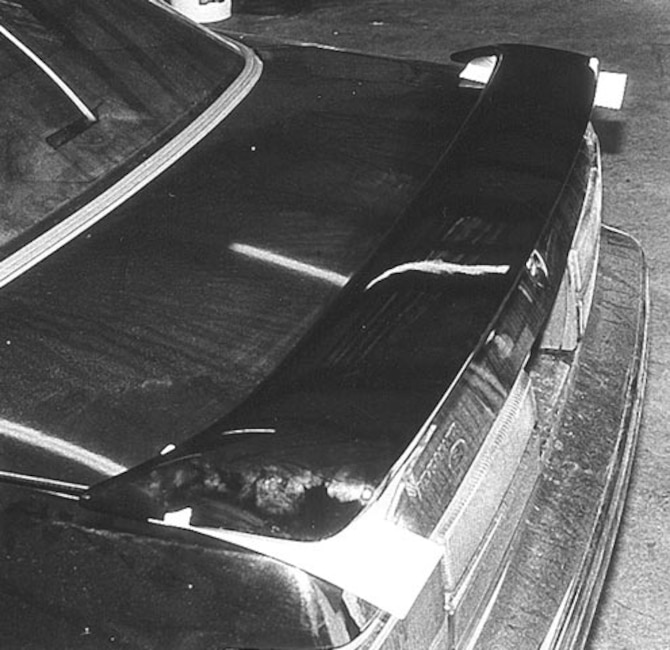 The wing is now laid in place on the decklid for measurements. If your convertible has a decklid-mounted luggage rack, then you will have to remove the rack and repaint the decklid, or you can install a sedan decklid. 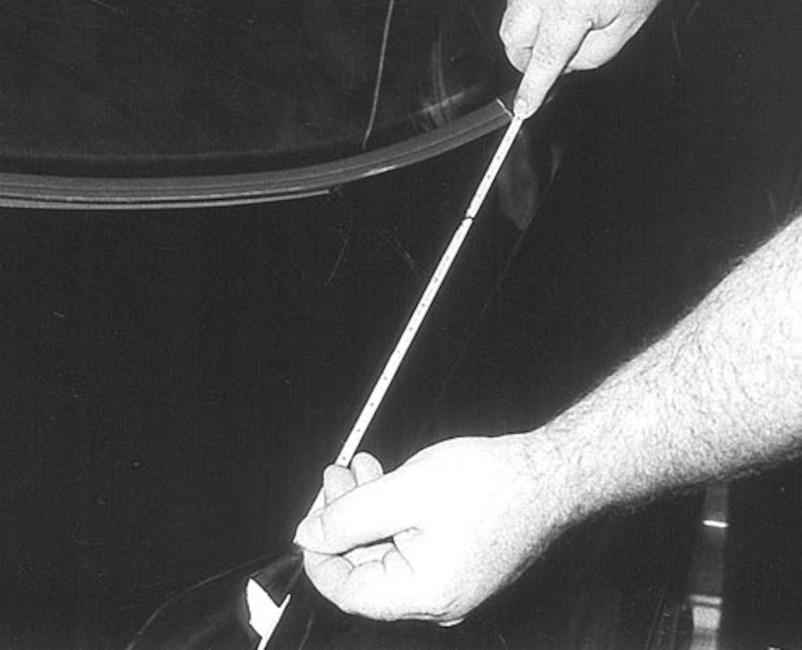 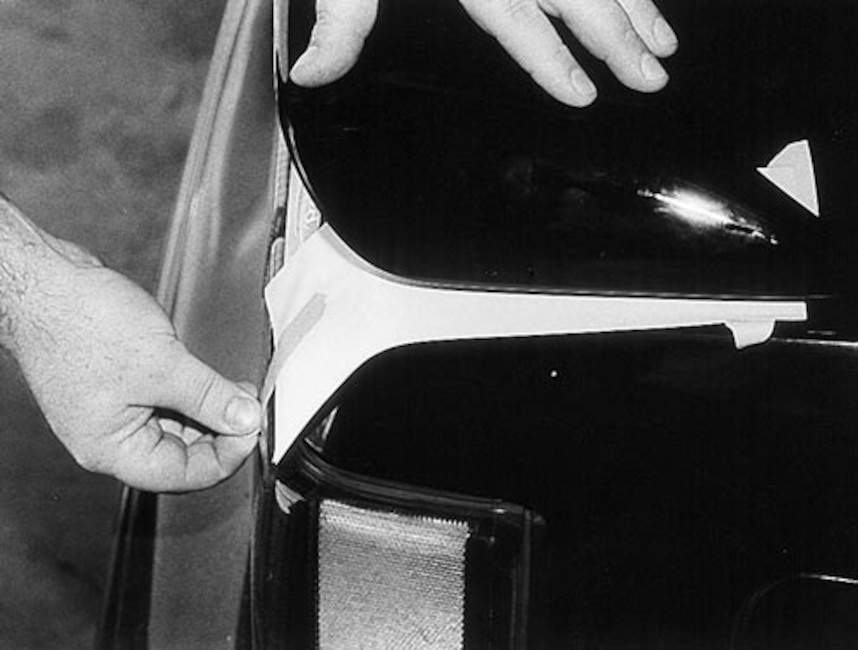 Once the wing is sitting in the desired location and is square to the body, the templates we made can be carefully taped to the decklid area. 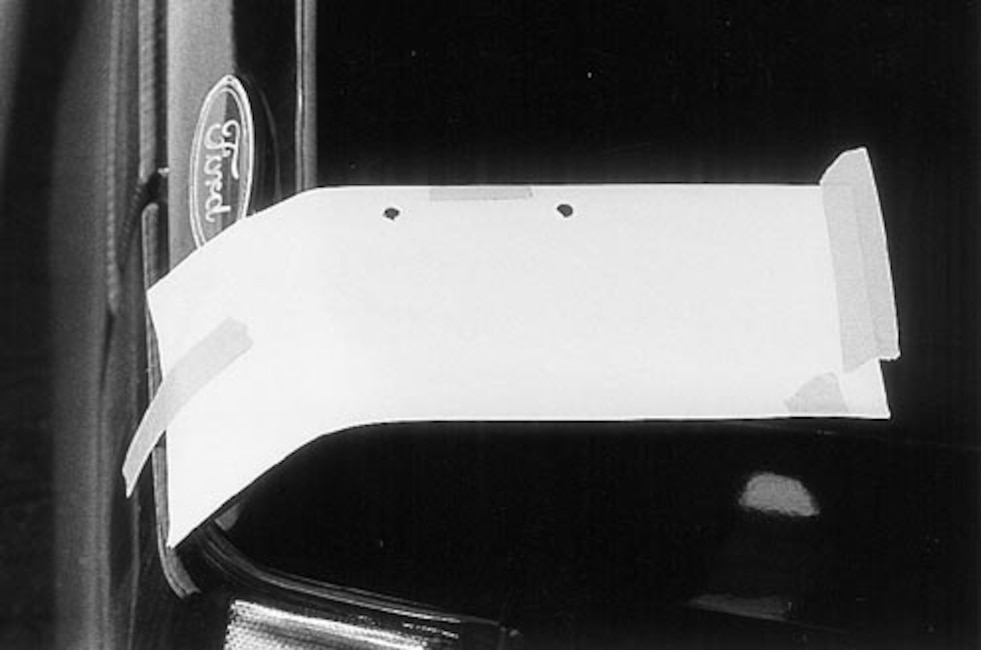 Make sure the templates are secure so they will stay on the car when the wing is removed. 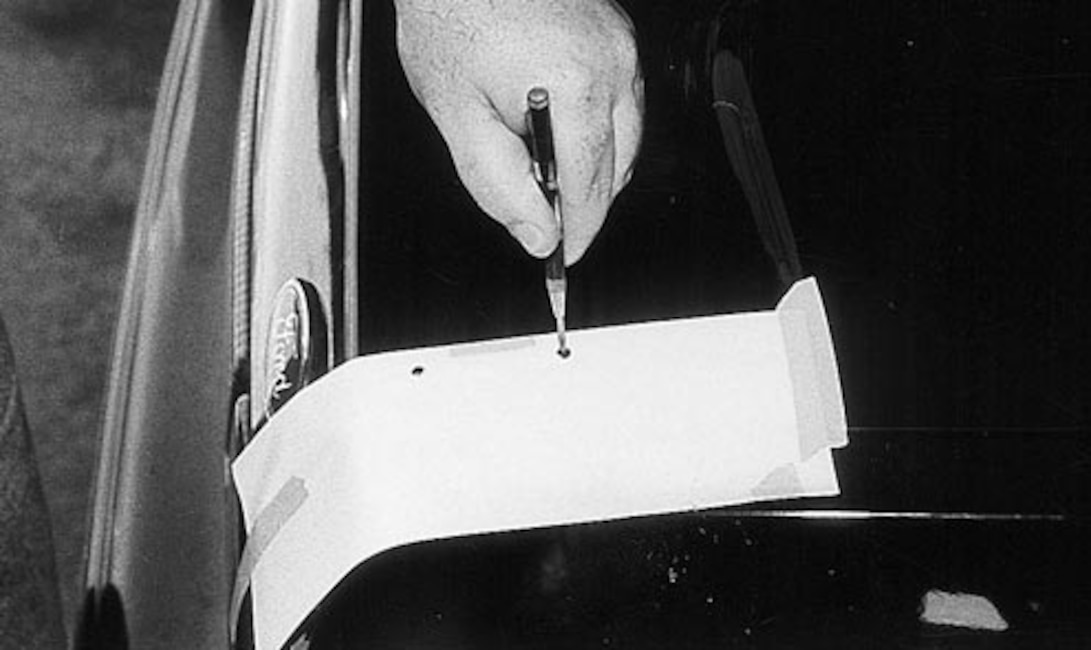 With the templates now on the decklid, it’s simply a matter of transferring the mounting hole locations to the decklid. You can use a scratch awl to circle the openings or you can use a punch to make a center punch mark. We prefer the center punch, as it aids in preventing your drill bit from walking when it comes time to drill the holes. 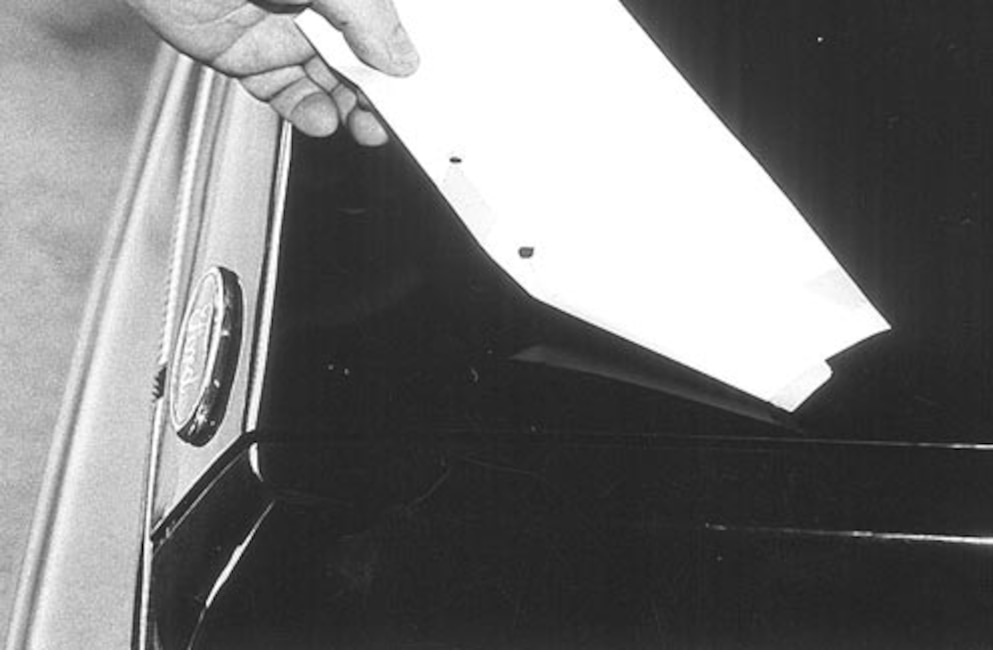 Once the mounting holes have been marked on the decklid, the templates can be removed and discarded. 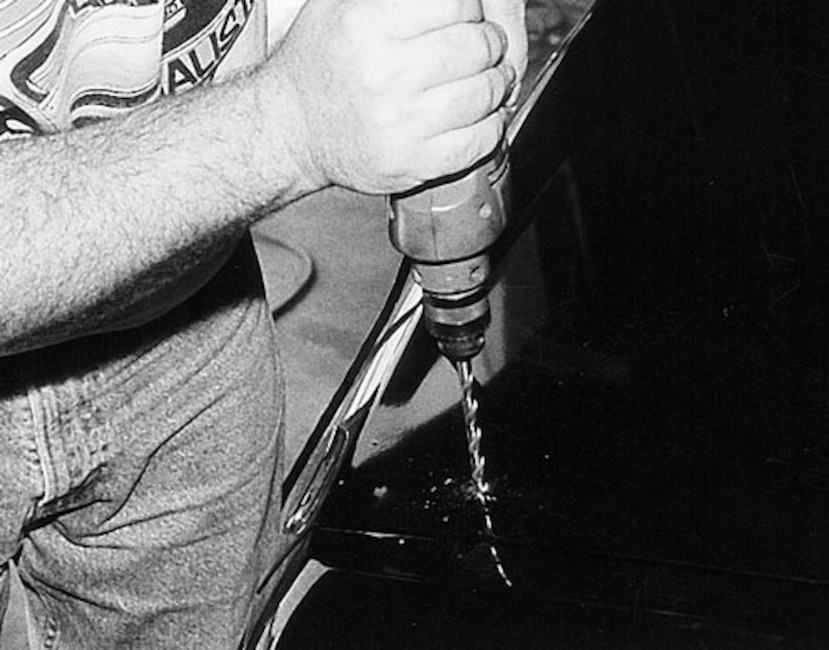 Using a 5/16-inch drill bit, the mounting holes were quickly drilled out of the decklid. Drill through only the top skin at this time. The bottom skin has too much curvature to it and will only make the drill bit walk. 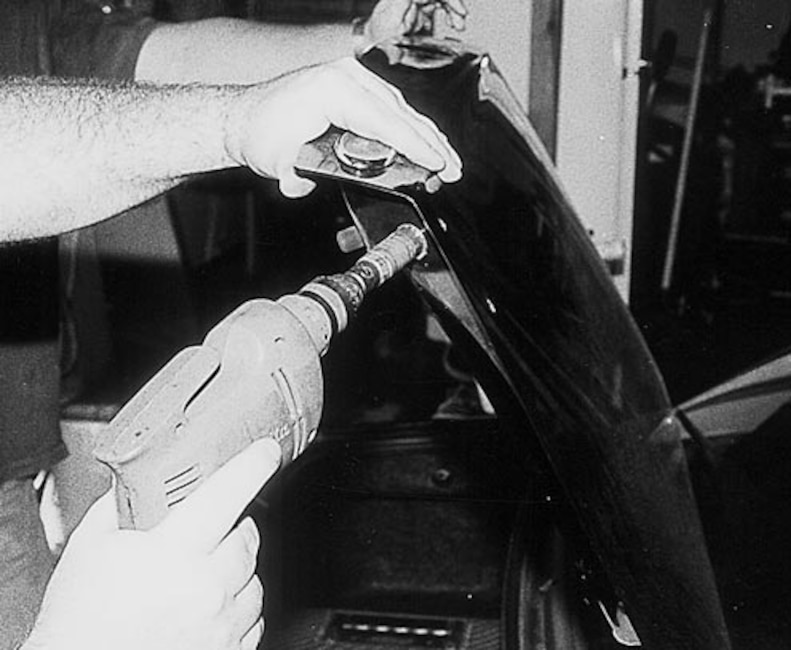 Next, we used a 7/8-inch holesaw to make access openings in the lower skin. Carefully measure the location of the mounting holes, and then make the access holes accordingly. Use a file to clean up the holesaw opening, because you’ll be inserting your fingers into these openings to mount the wing and you don’t want to cut yourself. 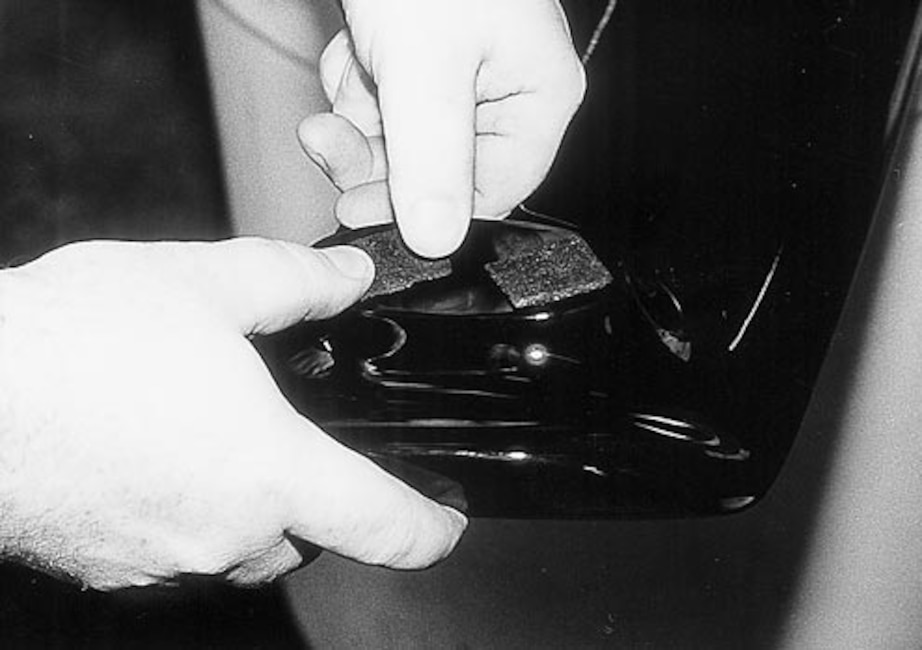 Apply waterproof sealer to the base of the wing to prevent water intrusion and any future rust problems. Sealer for taillights, window glass, or firewall openings works well. Clear the openings for the mounting bolts. 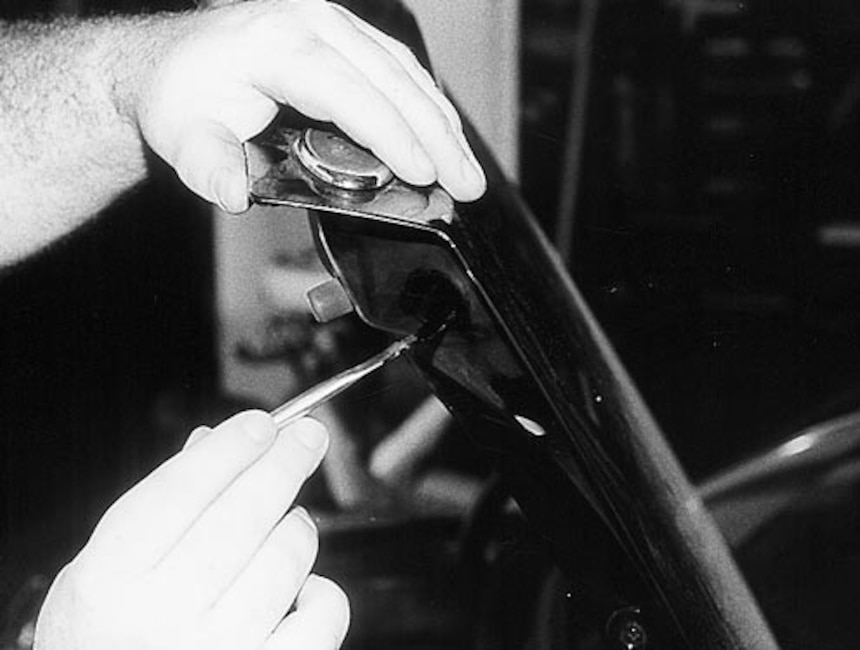 Before mounting the wing, use some touch-up paint to cover up the bare metal edges of the mounting holes. You will more than likely have to repeat this after the wing is installed to touch up any areas that you rub off. 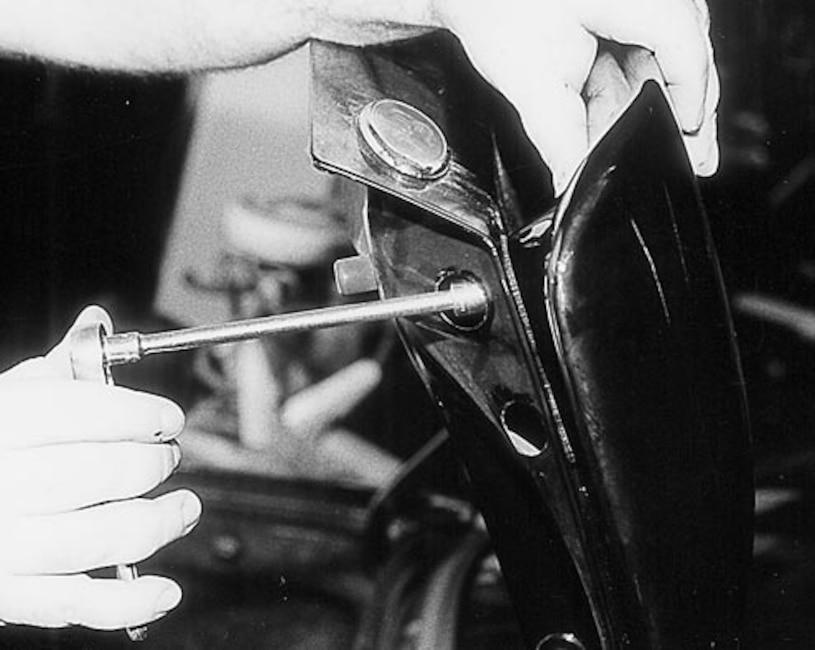 Ask a friend to hold the wing in place while you start a bolt on each side. Don’t tighten them down too far, as you will need to let the wing wiggle a little to get the other bolts started. If you’re lucky, you can use a 7/16-inch socket on all four bolts, but if you drill the access hole off a bit (hey, we didn’t say we were perfect!), then the use of a 7/16 open-end wrench will have to be called in. 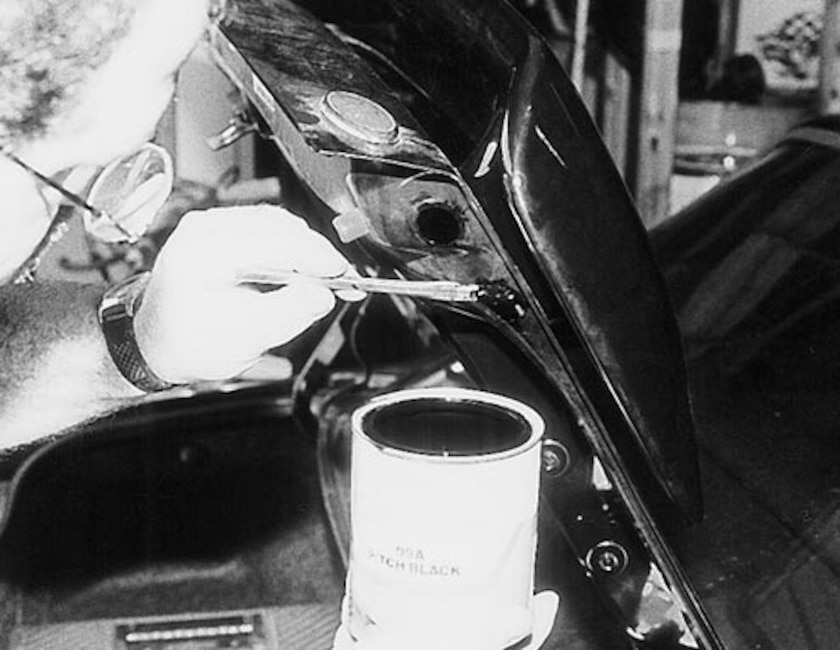 As we stated earlier, another bit of touch-up paint might need to be applied when you’re finished. We even painted over the installation bolts to seal the area. 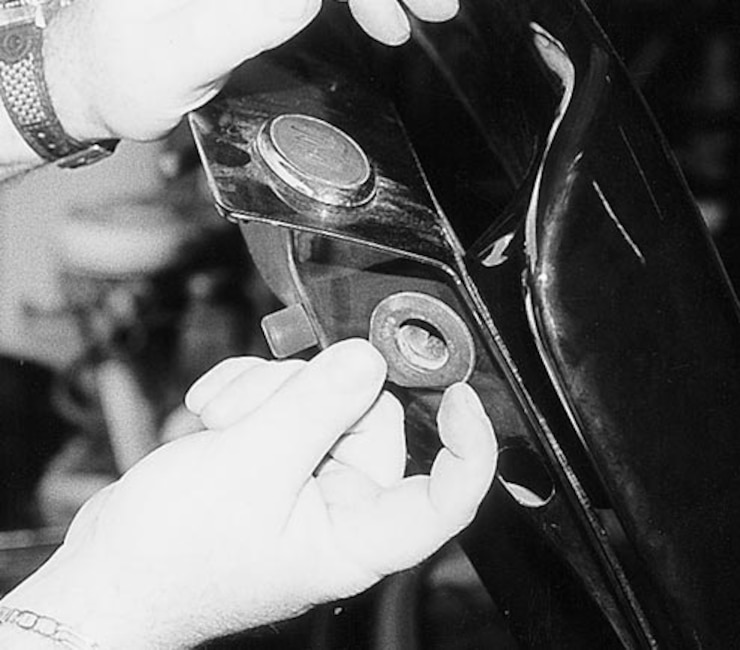 Visit your nearby paint and supply store and pick up some rubber body plugs to fit the 7/8-inch holes that were drilled. These give the installation a finished look. Modifying your Mustang is almost a rite of passage, and seeing a stock Fox-body Mustang is relatively rare these days because of this rite of passage. The Fox Mustangs can almost—dare we say it—be compared to the ’65-’66 Mustangs. The model years are so plentiful that if you take one and modify it to your tastes, you won’t be stoned to death by a concours judge at your next car show. It should go without saying that any exceptional Fox Mustang, such as a ’93 Cobra, the ’79 Pace Car, any SVO, or one of these Feature Car Mustangs (to name but a few), shouldn’t be cut up any more than you would a ’66 Shelby or a ’65 Hi-Po GT fastback.

When it comes time to personalize your Fox Mustang, a rear wing is almost always at the top of the wish list of goodies. Hatchback owners have it easy with the simple yet famous looks of the Saleen wing and its various aftermarket versions. But sedan and convertible owners have it tougher. Sure the Saleen-style wing is available for these flat-deck Fox Mustangs, but they seem to be on the big side and can take over the looks of the car. Other alternatives were few until Ford offered the well-known Feature Car Mustangs in 1992 and 1993. With their monochromatic vibrant paint features and limited numbers, Feature Cars were popular with the show crowd. But obtaining a Feature Car wing for your convertible or sedan meant visiting your local Ford dealer and coughing up big money. Now due to the perseverance of Greg Brittingham and his crew of parts designers at Mustang Parts Specialties, anyone can spruce up the flaccid flanks of their sedan or convertible with a reproduction of the famed Feature Car wing for just $199 (not including shipping). Installation is simply a matter of having the wing painted and drilling a few holes.