Get Rid Of Torch Blow Holes With A Simple Welding Job 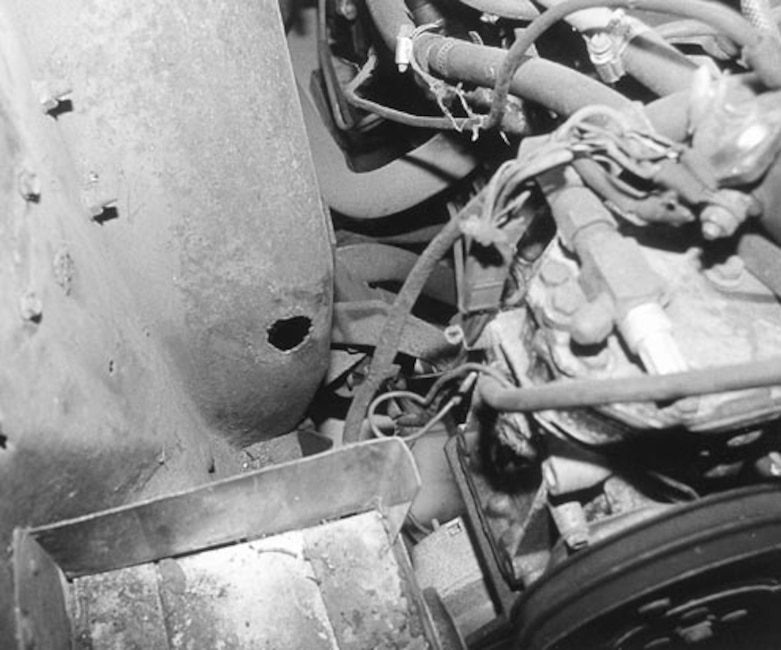 A common sight in high-mileage vintage Mustangs, these shock tower blow holes can be easily fixed with minor welding to prevent further weakening of the shock towers. 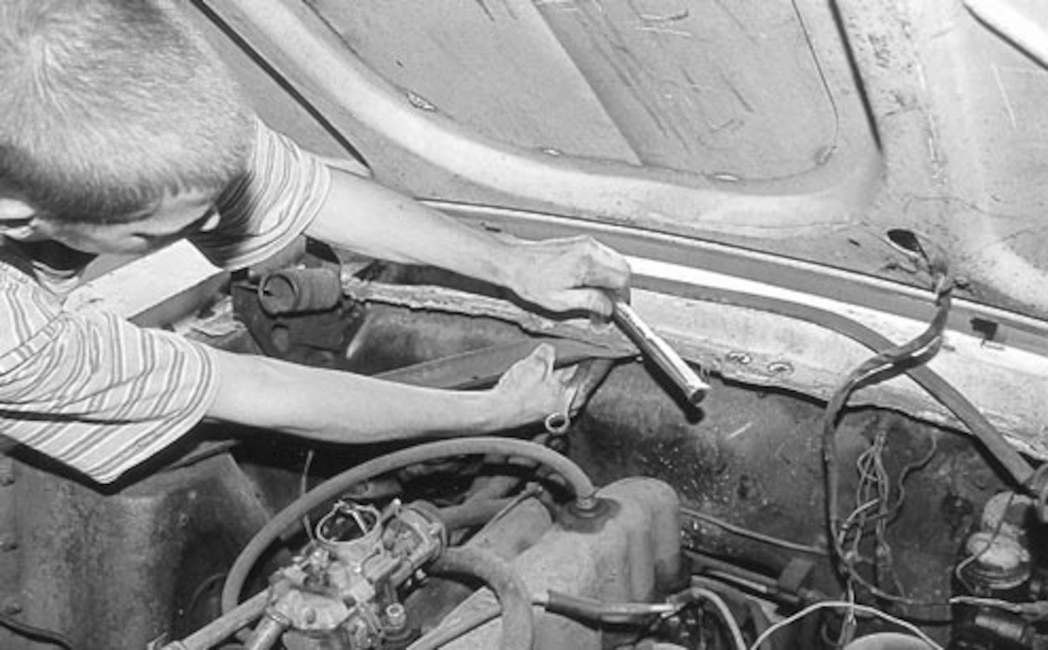 In order to gain access to the areas for repair, remove any items that will be in your way. The battery, the starter solenoid, the washer bag/bottle, wiring harnesses, and shock braces can be easily removed. 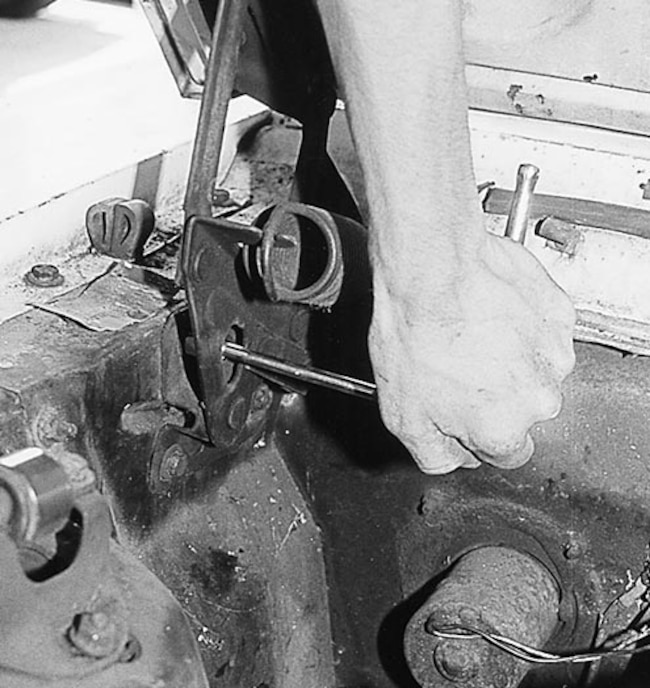 The rear areas to be repaired can be more challenging, but since we made quick work of removing the hood (with the complete spring assemblies), the access was greatly improved. 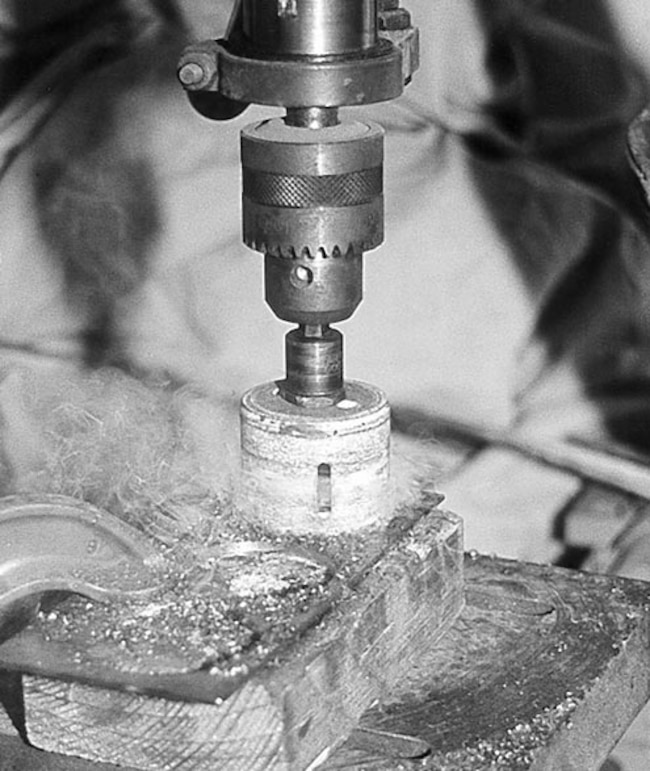 When welding the damaged areas, you will need to use metal with a similar thickness to the shock towers. We used 1/8-inch pieces of scrap metal to make repair discs with a holesaw. Measure the holes at their largest point, and then make a repair disc slightly larger. 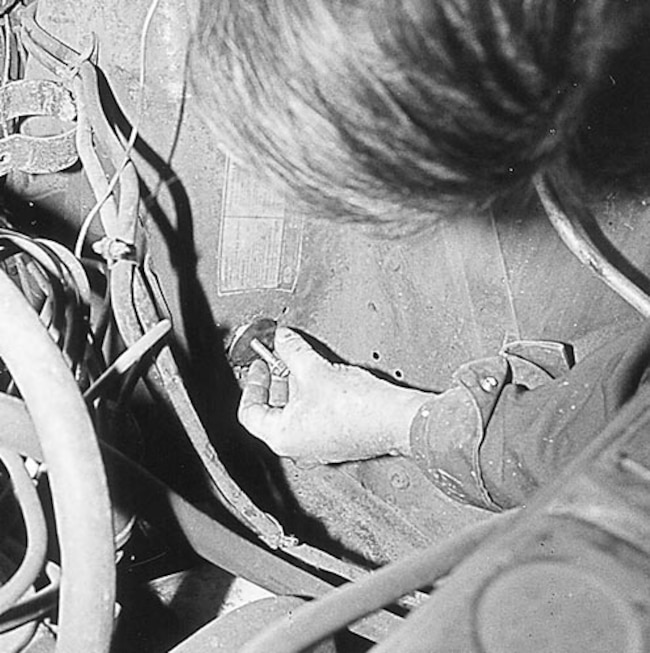 Next, Danny Gaydos test-fits the patch disc to determine how much material needs to be removed and in what location. The self-tapping screw in the center pilot hole makes a simple handle to hold the patch during welding. 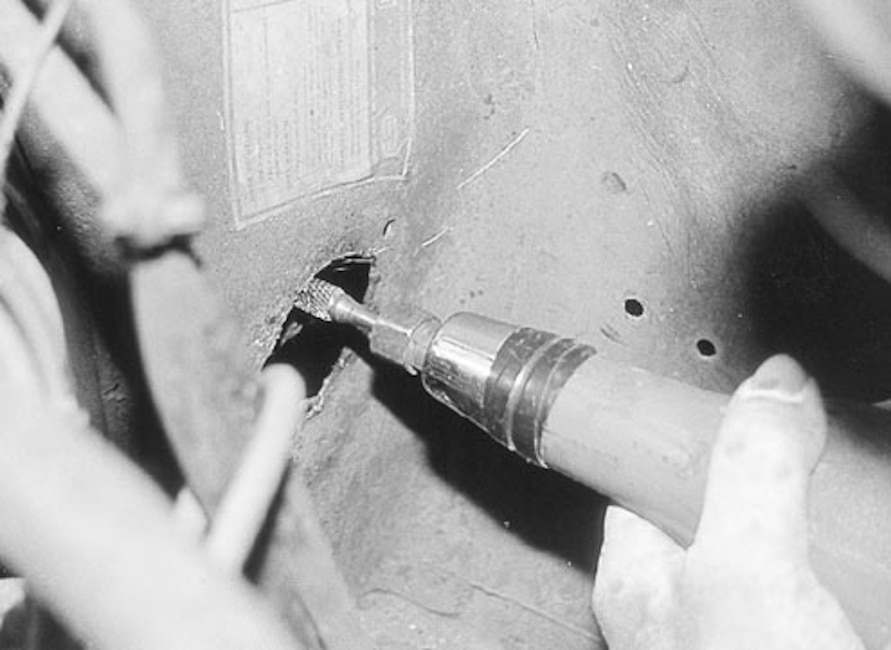 Using a high-speed rotary tool, Gaydos trims the opening a little at a time. 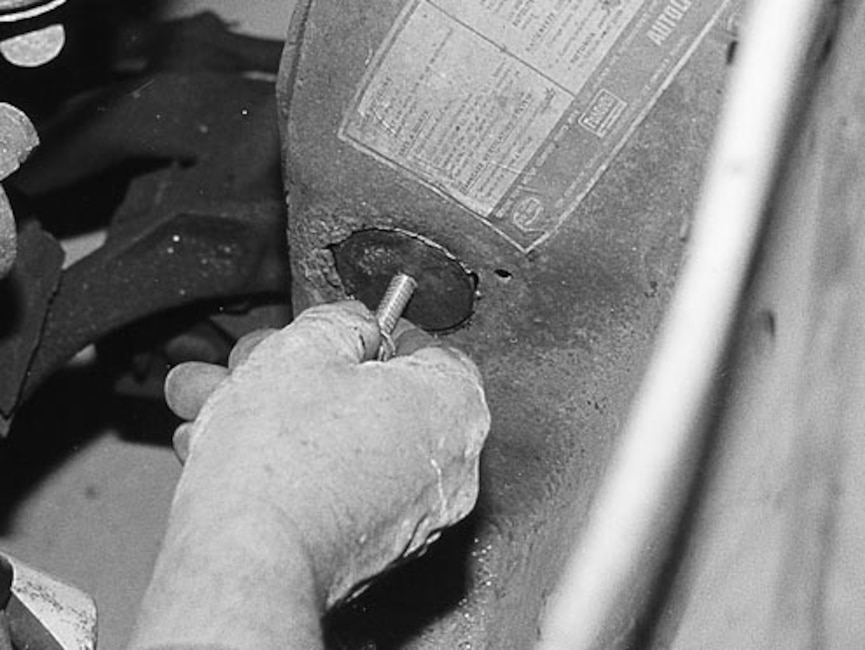 The opening is slowly made perfectly round and has just enough gap between the shock tower and the patch for welding. 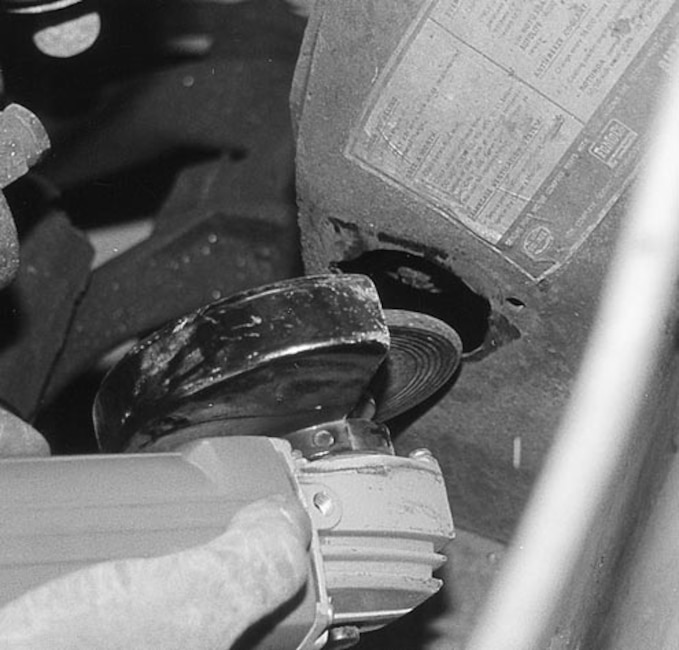 Before welding begins, the edges of the circular opening are dressed with a grinder. This action removes any burrs or high spots and promotes a strong weld. 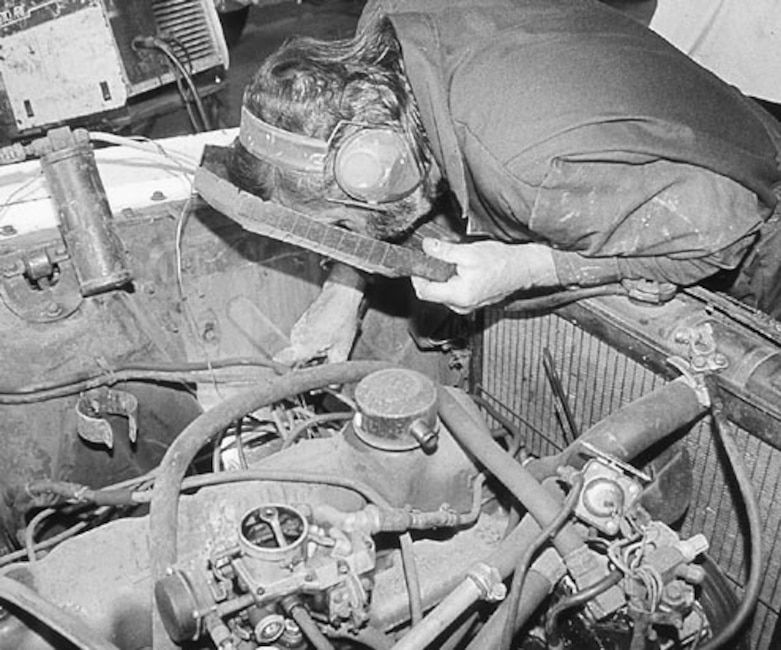 Gaydos rolls out the shop MIG welder and tacks the patch into place with a short weld. Once the patch is held by the weld, he proceeds to weld the patch around one quarter of its circumference. 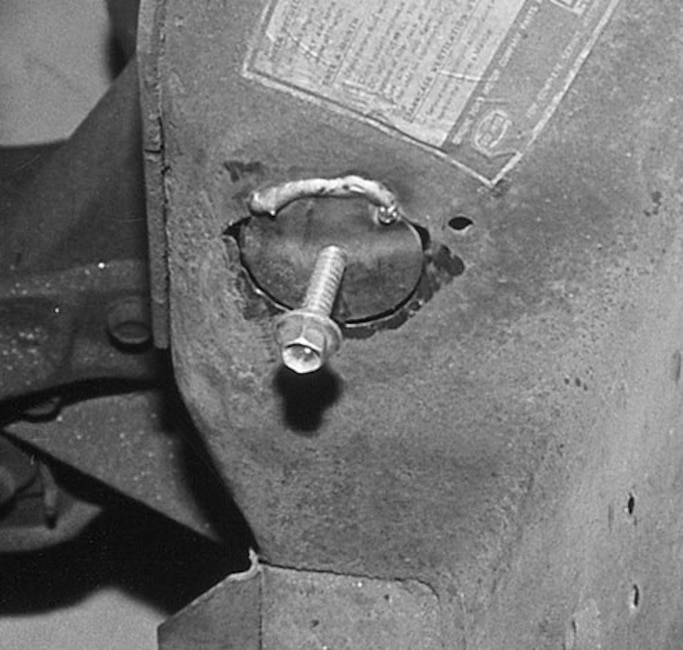 Gaydos lets the patch cool for a minute to prevent heat buildup in the small area. Now the handle can be removed for the remainder of the welding process. 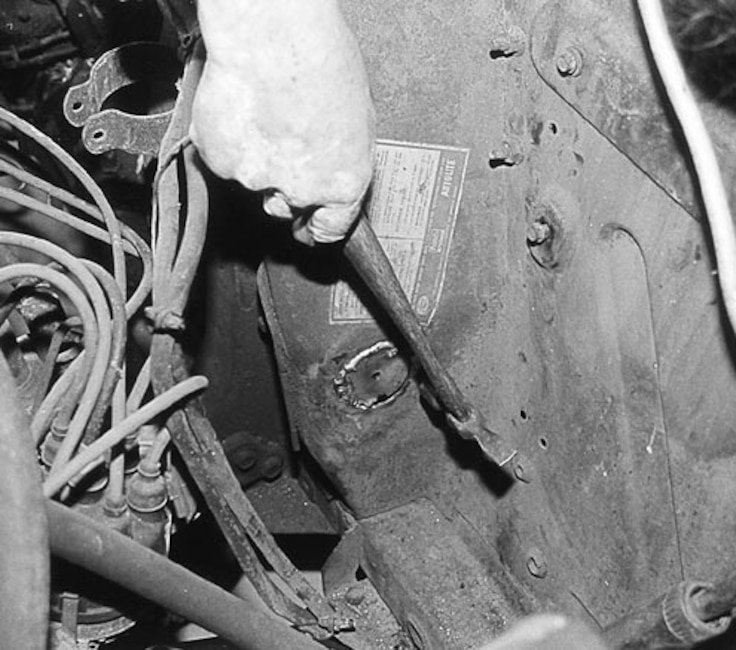 Check the patch before continuing and tap the patch as needed to keep it flush with the shock tower. When completed, you want as little filler as possible in the repair. 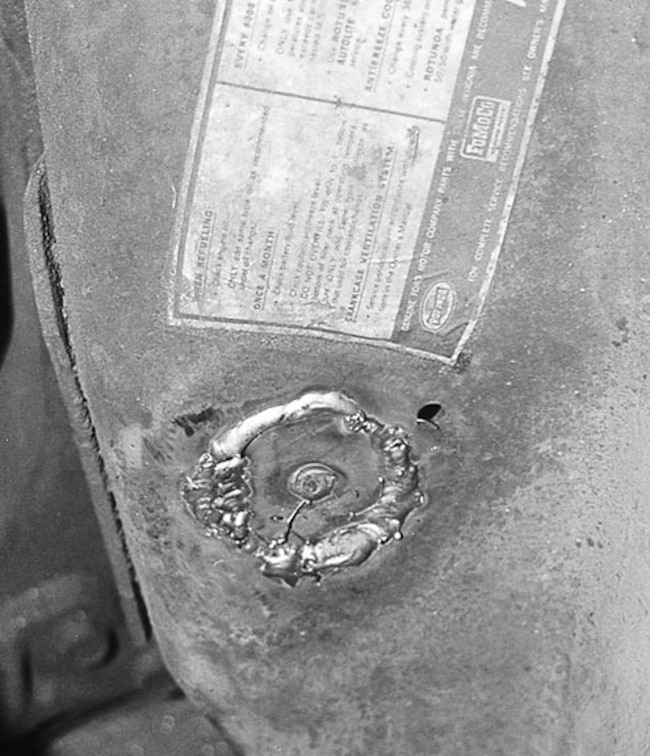 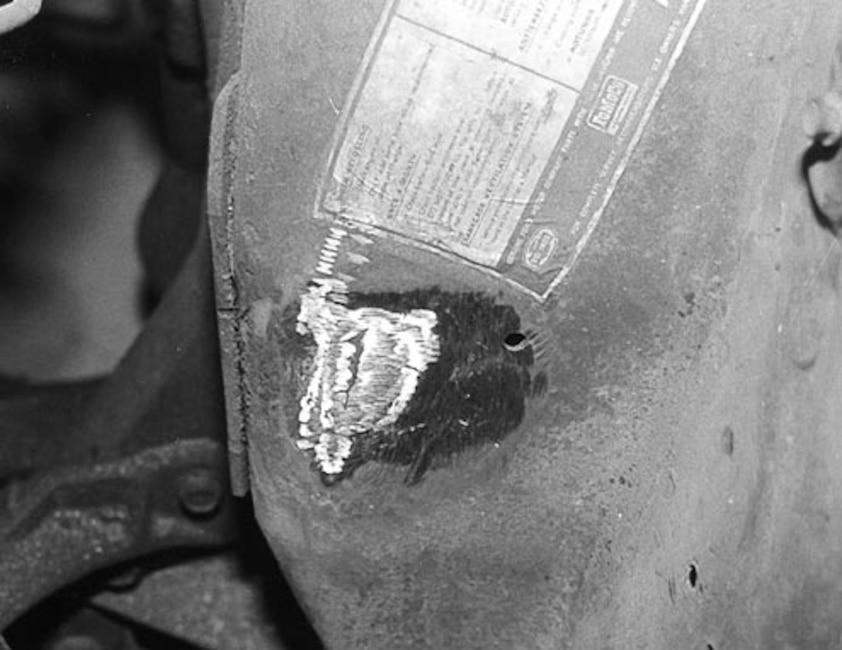 The grinder is brought out once again to finish the welding repair by grinding it flush to the patch and the original shock tower area. 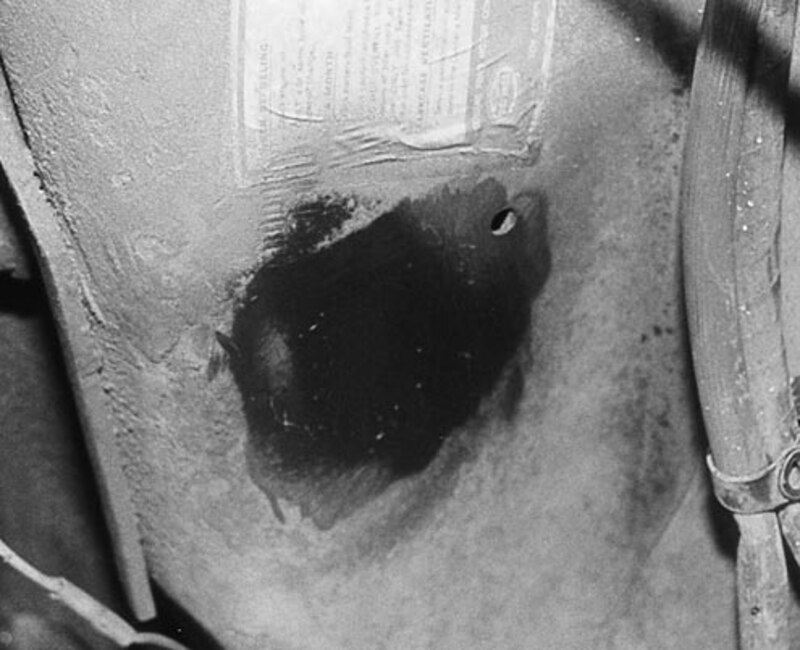 We simply shot some black primer onto the areas for now to bide our time against rust, but the surface will need little—if any—filler due to Classic Creations’ fine work. 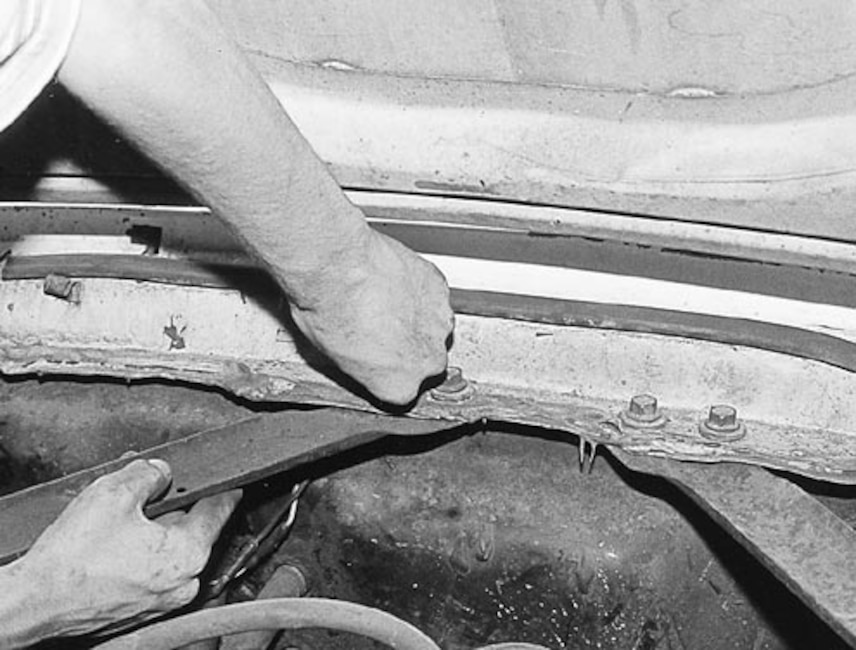 Reinstall all the items that were removed for access. If you removed the hood, make sure you get some help lining it up to prevent any paint damage.

If people had crystal balls in the ’60s, things would be so much easier for a Mustang enthusiast today. Many times, the normal act of maintaining a Mustang resulted in dire consequences 30 years later. Even Ford dealer technicians weren’t any better. We constantly witness Mustangs with dealer-installed A/C or other options that required holes to be made or parts cut. These modifications could have been made with a holesaw or other tool for a clean, professional installation, but you have to remember that these technicians and gas station mechanics worked in an environment where time was their enemy. Flat-rate labor was how they worked (and still do). Flat-rate meant they were paid a certain time for a certain job—no matter how long it took.

Let’s use the A/C installation for an instance. If the job paid the technician 2.5 hours, then by the book he would have to finish the job in that time or less to break even or “beat the book.” This necessitated shortcuts—nothing unsafe, mind you. But if the A/C installation called for a hole in the core support, a blow torch or “hot wrench” would be used to make short work of the opening needed. The technician made some money and the owner had A/C. But now—30 some years later—those ghastly torch holes make for a poor-looking engine compartment.

This particular Mustang, a ’68 hardtop, has dealer-installed underdash air with some bad holes made during the installation. But before we fix these, we wanted to fix another common torch job found on Mustangs—upper control arm blow holes made to allow greasing of the upper control arms. This is another common problem that is brought on a few years into ownership when the upper control arms begin to squeak. The local garage may have said the cheapest fix was to cut holes in the shock towers and install grease fittings. Thus, the squeaking stopped—but at the cost of shock tower integrity and possible future rust damage. This is what we will tackle today. Danny Gaydos and Matt Simmons of Classic Creations of Central Florida walked us through the simple steps.