Our Big, Bad Fairlane Gets the Thunderbolt Look From U.S. Body Source 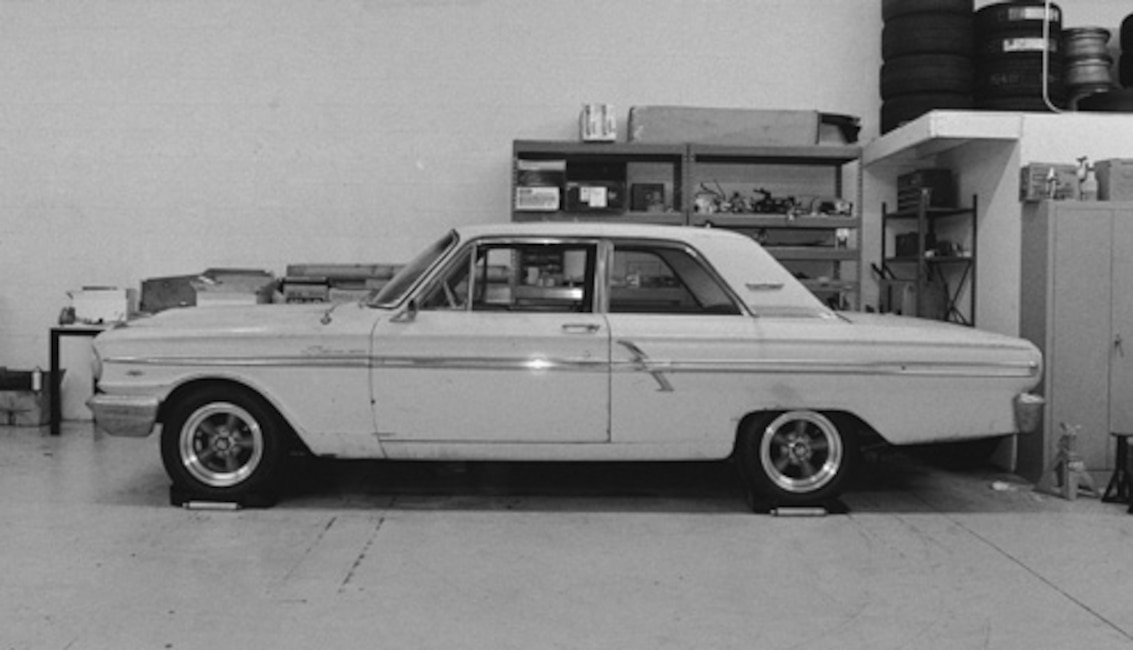 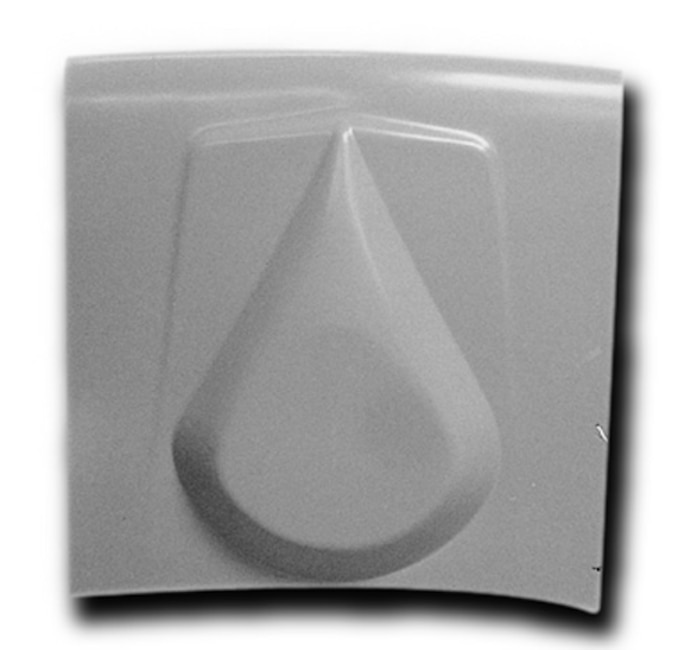 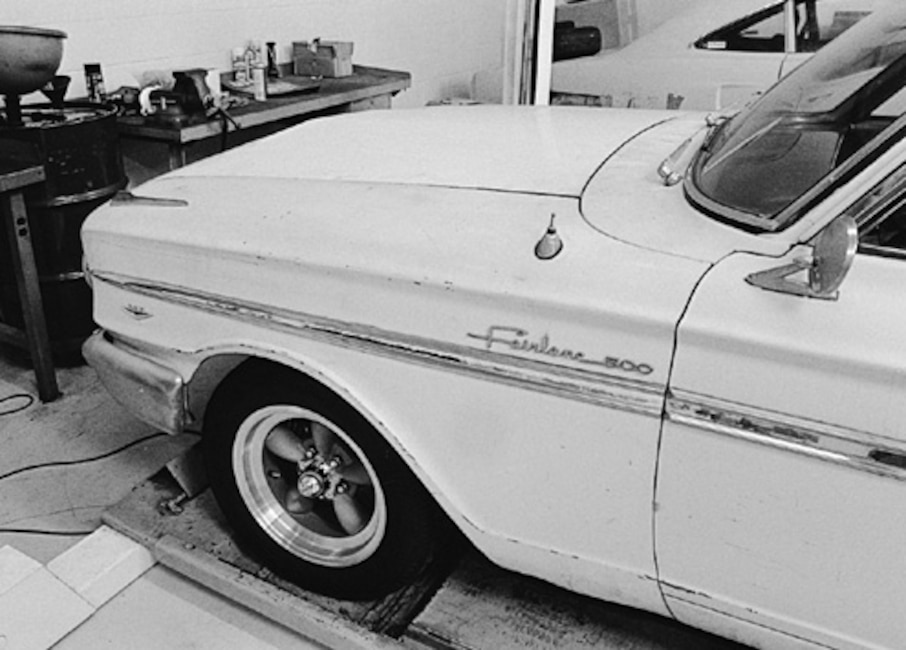 When you compare the U.S. Body Source hood with the stock unit, it makes the stocker look like pretty pedestrian stuff. 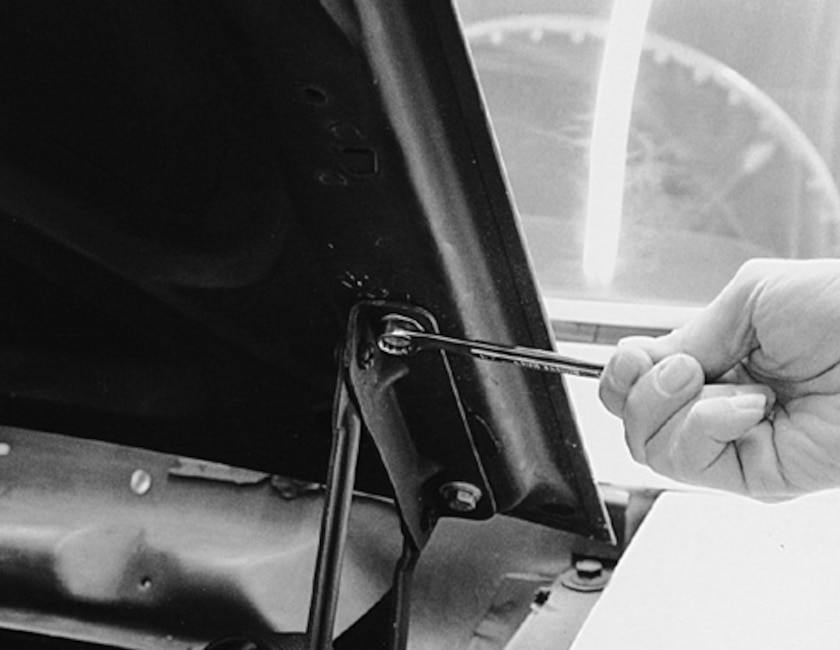 You’ll need to have at least two people for the swap, so line up a helper before you jump in. With one person on each side, remove the upper of the two bolts on each side of the stock hood where it mounts to the hinge. Removing the upper bolts first keeps the hood from sagging and bending things. Then, while having a spotter support the front of the hood, remove the remaining hood mounting bolts. 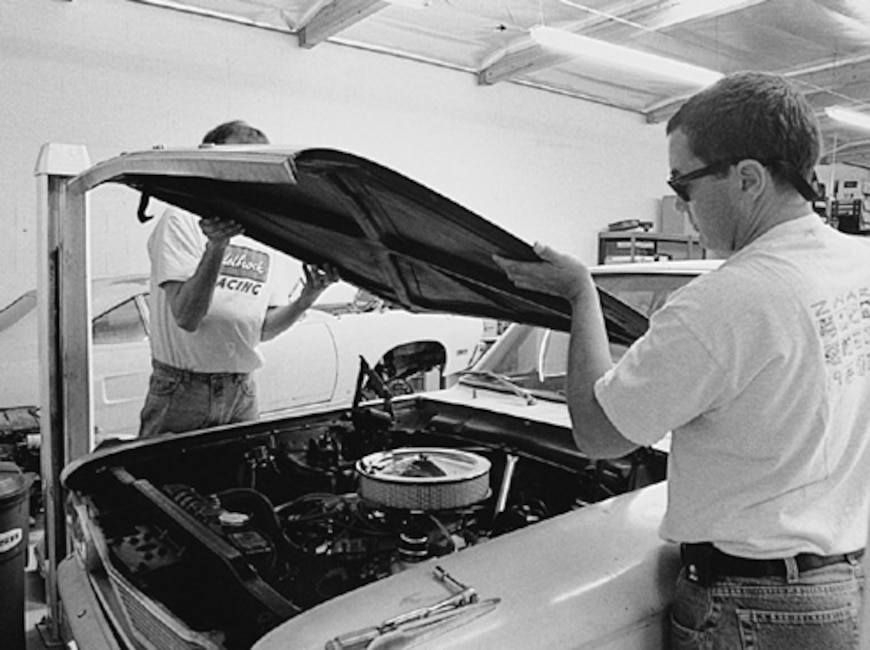 When all of the bolts have been removed from the hood, remove it from the car. This thing weighs a lot. The fiberglass hood will save us considerable weight. On three! 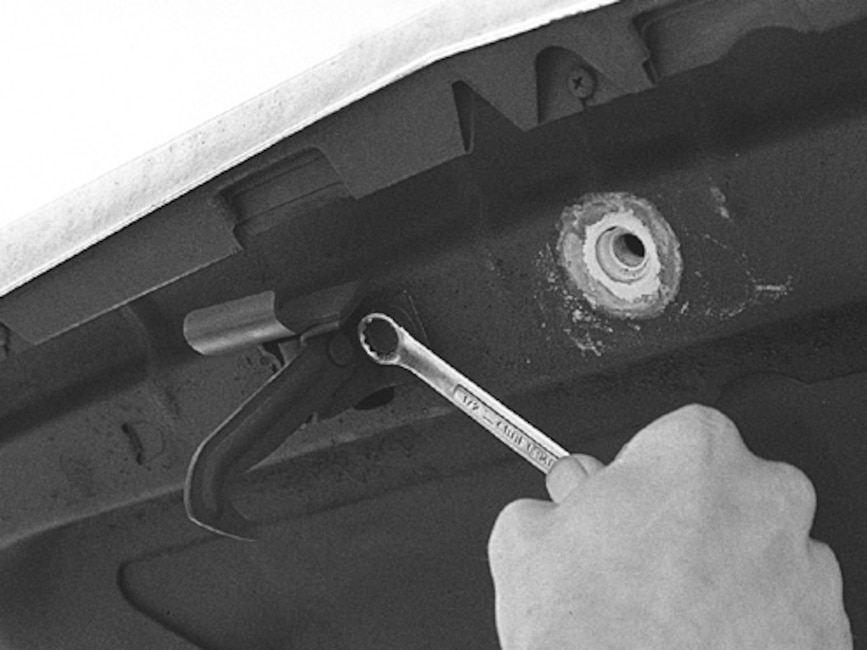 Remove the secondary latch, or safety catch, from the stock hood. You’ll want to install this on the U.S. Body Source hood, and the provisions to mount the catch are all set up and ready to go. We’ve already removed the main latch pin, and we’ll hang on to this for possible use later. 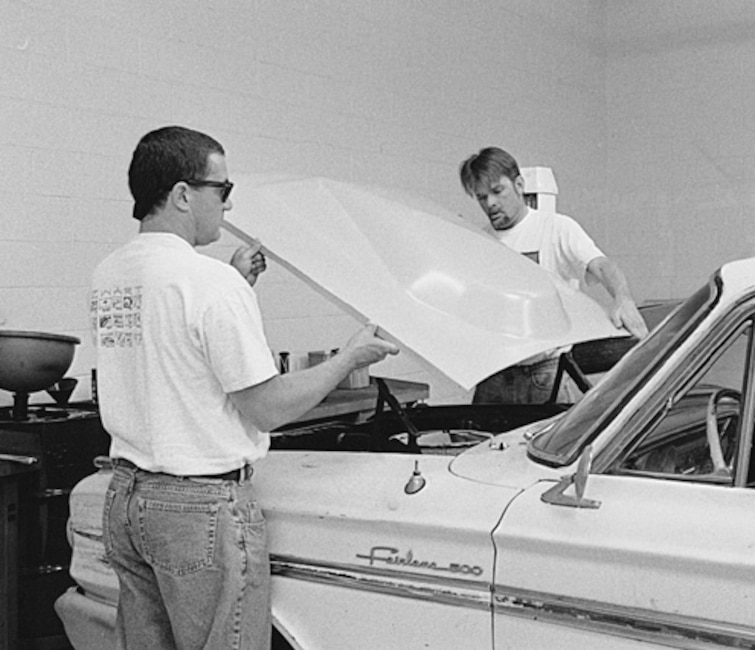 Now comes the moment we’ve been waiting for. Here we gently lower the new hood into position. The provisions for the hood mounting are supplied and already in place, so installation is a snap. Even the bolts are included. Leave the bolts a little loose because you’ll want to be able to shift the hood slightly for adjustment once it’s in the closed position. 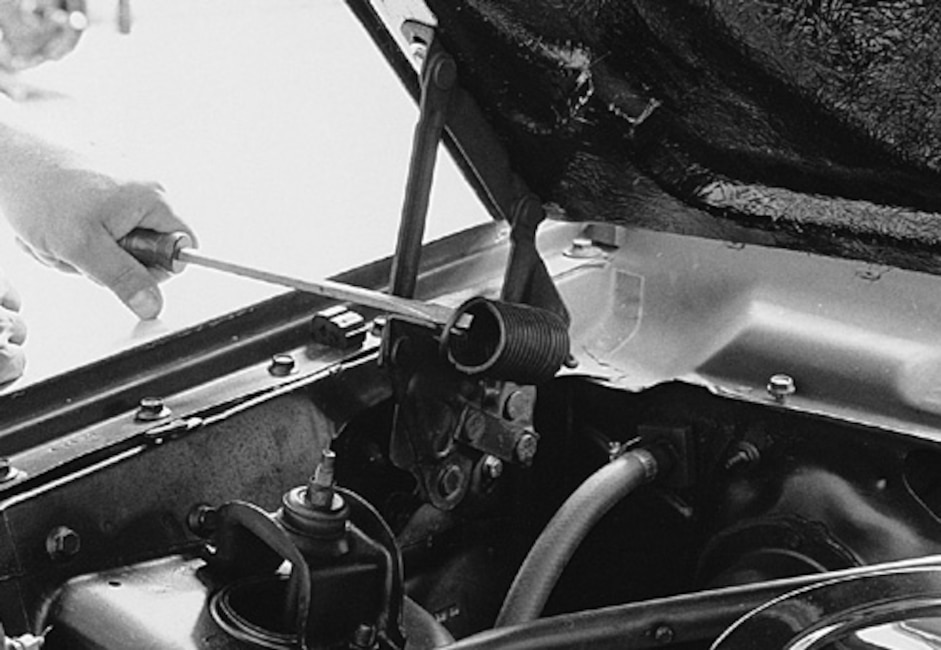 It’s very important to remove the original hood support springs as shown here. You can pry them off with a large screwdriver without too much difficulty. These springs are far too strong for the fiberglass hood, which is less rigid than the stock steel unit. Don’t try to close the ’glass hood with these in place because you’ll break the hood. When everything is complete, you may wish to install a support rod to keep the hood in the open position when needed. Short lengths of lightweight chain in place of the springs can also be used. We’ve seen both methods used. 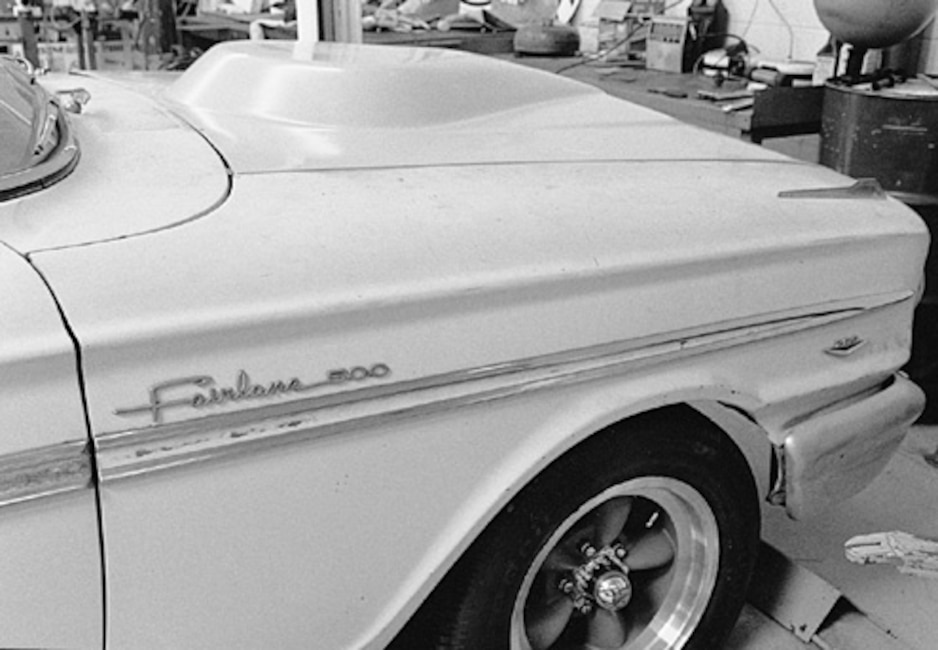 With a few minor adjustments, we were able to lower the hood into place. In this photo, it’s easy to see that we have a very good fit. We won’t need a lot in the way of adjusting or grinding to get just the fit we want. 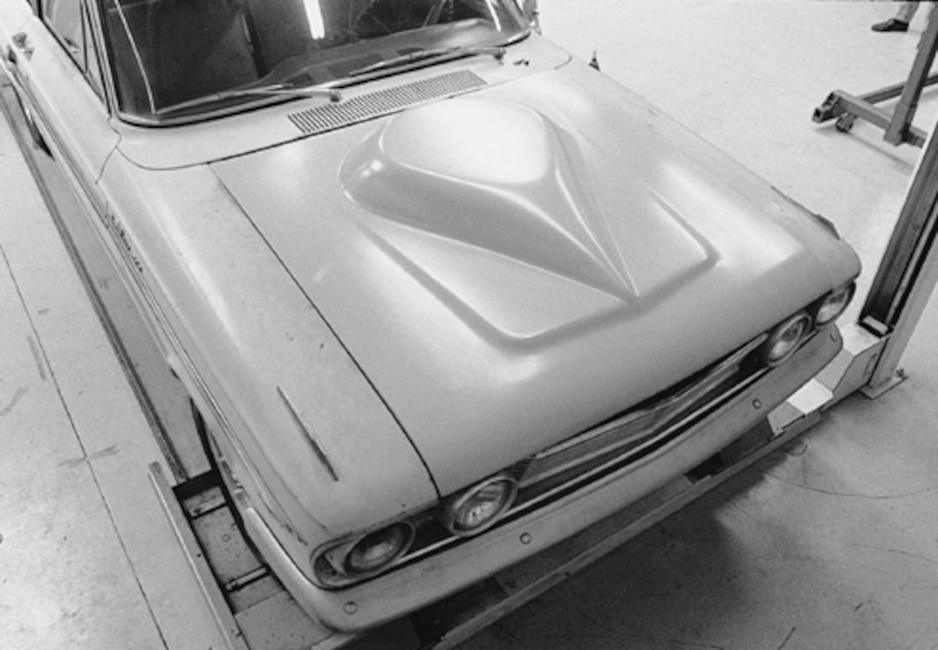 Here’s a view from above of the hood in place. There’s no difficulty spotting the teardrop power dome here. No doubt about it, this hood will give the car a whole new look. We installed the safety latch on the new hood before it went on. For the main latch, we may go with hood pins, both for the look and for the additional safety they provide. With slight modifications, a concealed latch setup could also be used.

Click on the link below and you'll find us upgrading the engine of our '64 Fairlane with a great carb and manifold installation. Many thanks to Holley and Weiand for getting us fixed up on the induction side of our mill. To cover it all up, we spoke to U.S. Body Source about a custom hood for the car. We were really interested in a teardrop-style hood because this was the type used on the famous Thunderbolt.

The T-Bolt was a potent factory-made drag racer produced to bolster Ford's position at the digs back in 1964. They were two-door sedans, also known as post cars. The sedan featured a vertical pillar between the front and rear side windows that's not found on the hardtop. This made for a more rigid car--something desirable if you're going to stuff an FE 427 underhood. Our Fairlane is a sedan, so a teardrop hood would give us a pretty authentic T-Bolt look. U.S. Body agreed to help us get started. Although our car has nothing near a 427, we never know what the future holds. Besides, we love the aggressive look the hood gives the car. The huge box just arrived. We're ready to get started.

The first thing you see when you look under the hood of this '64 Fairlane is a pair of custom-built chrome airboxes. Then, upon closer examination, you recognize the shape of superchargers mounted near each side of the engine, connected together via a drivebelt. Find out more about this 1964 Ford Fairlane at Mustang & Fords Magazine.

Join Mustang & Fords Magazine as they dress a freshly painted '64 Fairlane with new trim and emblems.

How To Change Weatherstrip

Join Mustang & Fords Magazine as they change the weatherstrip on a 1964 Fairlane.

Check out Mustang & Fords Magazine as they upgrade the vintage small block of a 1964 Fairlane.