Mustang on a Spit 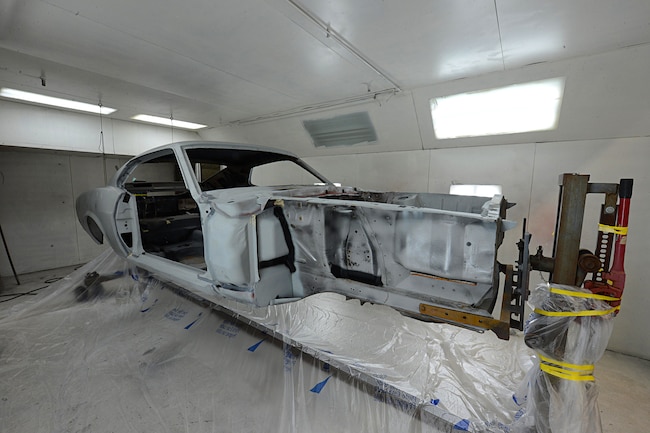 For a proper restoration, or even a full build on a trick restomod Mustang, it often requires putting the car on a rotisserie. Think of the full chicken you put on a spit on your BBQ grill, so it spins while cooking. That’s the concept of an automotive rotisserie, just on a much larger scale.

A rotisserie allows you to rotate the disassembled car 360 degrees, so working on the underside, sides, or top doesn’t require you to be a contortionist and makes restoring the body much easier. Jason White at Jason White Restorations in Hereford, Texas, stuck his 1970 Mach 1 on a rotisserie after media blasting it in order to seal the body seams and prep the car for a full paintjob. So, we wanted to tag along and show you how to do it.

Classic Mustangs share a unibody construction where the body is welded to different sections of the chassis in a honeycomb that gives the car more strength than the old-school body-on-frame. “We are going to prep it for paint by painting the bottom of the car and the engine compartment,” Jason says. “Then, we will do the seam sealing on the bottom of the factory applied after primer. We will also undercoat the back wheelwells.”

Upon our arrival, Jason had repaired any rust and dents, so the bodywork was done. He had also sealed seams that will go under primer or paint. The car was ready for spraying, and the final application of seam sealer. This job is the foundation for a topcoat of paint, which is the glamour end that everybody sees.

1. Bolted on a rotisserie is a 1970 Mustang body and chassis, stripped and sealed and ready to spray during this ground-up restoration. Rotisseries can either be built or bought from a variety of dealers. Many homebuilders rig up two engine stands to serve as rotisseries, making it really affordable.

2. Integral with the chassis is the body, including a double-walled upper cowl and instrument panel. Except for differences in the roofs, fastback, hardtop, and convertible are essentially the same.

3. The bottom of the chassis reveals many seams where metal is welded to metal. Before and during stripping, restorers must locate each of these seams, which are visible where factory workers applied sealer to cover openings.

4. The outside of the engine compartment side panels reveals many gaps on the unibody where Jason applied seam sealer.

6. To give a factory appearance, Jason sprays 3M Rubberized Undercoating Black (PN 08883) over the top of the beige sealer.

7. To fill small gaps, Jason uses 3M MSP Seam Sealer (PN 08370), which is gray and loads into a cartridge caulking gun for application. Apply gray sealer around doorjambs to keep rust from forming between any gaps in metal surfaces.

8. Seam sealing is very important beneath moldings, such as along the roof rail, where moisture can collect and begin the rusting process.

9. Jason sealed the floorpan inside the cab and covered it with the rubberized coating for a factory appearance.

10. These are factory sealed welds around the bumper reinforcement brackets in the trunk—one per side. Jason will paint the trunk later with body color.

11. Seal the seams at the rear of the trunk, as the factory did, to keep out water. If your trunk is leaking, check to see if the trunk rails are sealed.

12. Jason has sealed the gap where rocker panels meet rear quarter panels. Water could easily invade this space to start rust later, which would streak onto the body and ruin the paint.

13. You must seal the large gap between the inner engine compartment side panels and the firewall (visible in the middle). At the top, we can see that sealer fills the 1/16-inch gap in the cowl panel that runs along the top of the firewall.

14. The gap between rocker panels and floorpan will not be sealed until after primer is sprayed.

15. This seat bracket was factory spot welded to the bottom of the platform. Here, Jason has scraped off the seam sealer but left a small portion of the original factory applied gray primer (as a color check when he mixes primer).

16. Visible on the bottom are three daubs of beige sealer that passed through holes in the weld of a bracket in the cab. This is evidence that factory welds sometimes would blow holes in the metal.

17. Gaps in metal around rear spring mounts and torque box (far right) need to be sealed, but not until after the bottom is sprayed with primer.

18. The factory did not caulk this long seam at the rear of the platform, just forward of the trunk. Any water that gathers here will not go inside the cab. However, sealer here would definitely help protect metal inside the cavity from catching water and rusting.

19. In the reinforcement plate on the bottom, the factory did not seal these holes, which were plugged to fit a differential snubber on big-block cars.

20. At the place where the firewall meets the floorpan at the front of the car is a large gap between welds. The factory sealed this gap from inside, not here on the outside.

21. “Dearborn Slop Gray” is a term restorers use to describe a mixture of leftover paint the assembly plant sprayed on the bottom of Mustangs built at Dearborn Assembly. Jason mixed PPG epoxy primer in black and white to approximate this color. He used about three quarts, or right at a gallon, adding thinner and hardener.

22. Jason compared the shade of gray he mixed to the original paint on the bottom of this specific car to get as close as possible to original.

23. Once he had the primer color correct, Jason sprayed the lower sides and bottom of the body and chassis, wheelwells, and the outside bottom of trunk.

25. Once the Dearborn Slop Gray color was completely sprayed, our Mach 1 body/chassis looked like this.

27. Seal seams around the torque box and inside the rear shackle bracket.

28. Seal these round brackets at the back bottom of the floorpan.

29. Smear the black sealer with your index finger to imitate the factory procedure done on a moving assembly line.

30. Jason mixed about a pint of semi-gloss black to cover the firewall and engine compartment.

31. Jason imitated factory procedure spraying the chassis in the upright position, which casts an overspray pattern that does not completely cover the bottom sides of the metal.

32. Stand inside to spray the engine bay and continue spraying semi-gloss black on the inner engine compartment side rails.

33. Now completely sprayed, this is what the wheelwell areas look like.