How to Install a Front Subframe in a Vintage Mustang

Watch as Rich Smith and his crew at Mustangs to Fear in Rochester, Indiana show how to install its complete Long Front Subframe Assembly 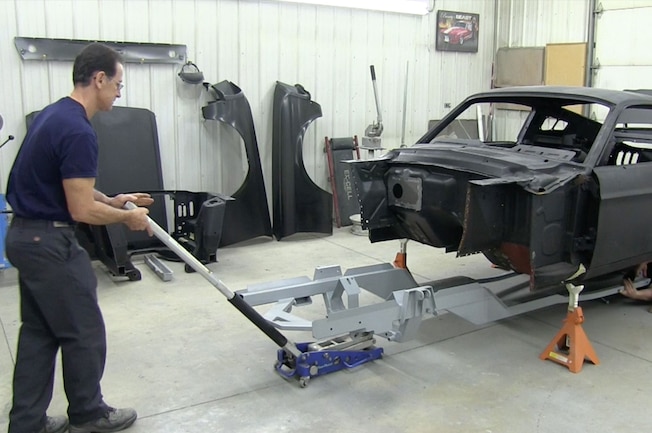 There are several reasons you may consider installing a new subframe in your early Mustang. The stock framerails may be damaged from accidents over the years or have rotted away with rust. Or, maybe you want to toss the stock early Mustang suspension and upgrade to something more capable at the autocross and on mountain roads. Both are times to strongly consider an aftermarket subframe assembly, such as this one from Mustangs to Fear [www.mustangstofear.com].

The MTF subframe assembly is made with 11-gauge 2x3 tubing, so it’s much stronger and stiffer than the stock framerails, and everything is completely welded and ready to go including the engine cradle, sway bar brackets, and jack pad. This is NOT a simple bolt-in deal to install, but with patience, lots of measuring, and a modicum of welding skills (or a buddy that can weld), anyone can pull this off in their home garage or driveway. We just have to emphasize the old carpenter’s rule of measure twice, cut once—we often change that to measure five times, cut once!

As company owner Rich Smith shows us here on a 1967 fastback project, MTF’s long subframe version bolts into the front of the rear leaf spring brackets and welds to the floorpan and firewall through stock spot-welds that must be drilled out. Once it’s in place, it’s ready for the MTF independent front suspension (IFS) that will convert the classic front suspension from original equipment to a powerful, controlled ride in a bolt-on package.

The subframe can be specified to hold a small-block Ford (289/302), an FE (390/428), a modular engine (4.6/5.4/5.8), and of course today’s engine swap darling, the 5.0L Coyote modular. The MTF Subframe Assembly was a culmination of several years of development in the Smith’s shop. He has been restoring lost metal on cars for many years now, so naturally he makes this whole process look easy. If you’ve never touched a welder or cutter before, consider taking your project to someone with some experience. If you’re comfortable with welding then you should find the whole process easy—but watch the video first to determine your level of enthusiasm at taking on this project. There’s no shame at all in admitting that it’s better to have a professional do it than screw it up yourself.

When performing this install, always use the necessary and appropriate safety gear. We can’t stress enough to take your time. Patience will pay off with a precision install laying the ground work for a quality build. Installing the Subframe Assembly from Mustangs to Fear gives you the foundation to build a tremendously solid car. Combine the Subframe Assembly with the MTF Full Engine Panels and you will have also have a nice clean and finished look for the front end of your mustang. All of the company’s components are designed to be used separately or to complement each other if you would like to use the full front suspension components.

01. The MTF subframe is considerably stronger than stock Mustang framerails, which are stamped steel. The MTF systems uses 11-gauge 2x3 tubing, making for a substantially stiffer frame for ultimate handling without the flex and slop of the stock suspension.

02. Here’s the front subframe assembly showing the MTF Independent Front Suspension installed, but obviously not on a car.

03. Measuring is the key to success. Get your Mustang up on stands or a hoist to let it rest evenly so you can make sure the front and the back are exactly the same height. One key tip is to always make sure you are measuring from the same point and same layer of metal. Measure the top of the frame rail at the back side of the core support on the inside and measure the front of the cowl to the radiator support and make notes of all the measurements you take.

04. Rich Smith shows where the spot welds are that need to be drilled out. Once that’s done, the factory front clip will come off.

05. Drill out the spot welds holding the stock framerails to the floorpan and separate the two. You might have to break out an air chisel or plasma cutter to make this easier.

06. Before you can begin welding things together, you must clean all areas.

07. From inside the car, you can see the holes from the factory spot welds. These will be used to temporarily screw the new subframe into place to hold it secure for welding.

08. Prep the areas with weld-through primer. This allows welds to penetrate the metal and still provides corrosion resistance.

09. Your trusty floor jack will help you get the subframe assembly into place. After you slide it under the car, use the jack to elevate the front of the assembly to almost the same height as the engine panels, which will allow you to get the rear portions lifted into position and bolted to the front leaf spring eyes. Once the bolts are in, lift the front up into place, just to make sure the assembly clears and lines up with the engine panels.

10. Attach a small ratchet strap from the front end of the subframe assembly to the body of the car to draw the assembly tight to the car. Once you have it lined up where you want it, run some screws through the floorboard into the frame rails to hold it in place.

11. Start welding the subframe into place at the rear of the car, and then through the floorpan spot weld holes (after removing the screws of course). A standard MIG welder works just fine for this.

12. These engine compartment panels are a $349 option and can be used with any Mustang II-based suspension (they make them for their own suspension plus those from Heidts, Rod and Custom, and Total Cost Involved). They save a lot of time from having to make panels of your own after cutting the shock towers out of an early Mustang, and have the correct curve of the fender built in as well as come bead rolled for strength.

13. Mustangs to Fear used this spot welder to secure the engine compartment panels. You can use a regular MIG welder but if you’re not patient and go slow, you can warp some panels that will need to be metal-worked and maybe get a skim of filler to make show-car nice.

15. This is a finished and show-detailed customer’s car with the subframe installed so you can see just how nice it all can look with a few paint and body work tricks.