How to Install Subframe Connectors on a Classic Mustang 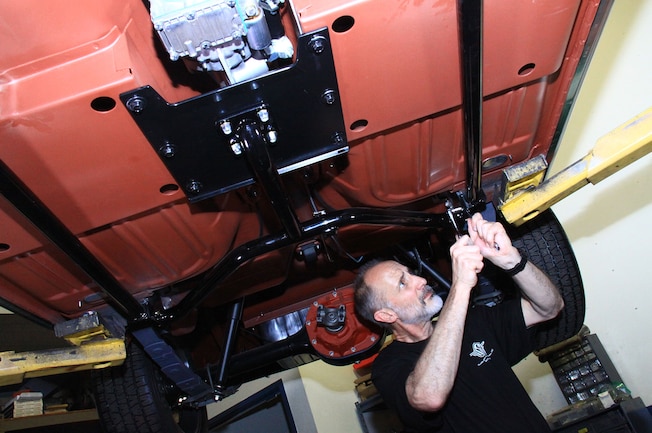 For generations automobiles were of body-on-frame construction, which dated back to the humble horse and buggy. Frames were built separately from the body, and then the two joined in a place on the line known as the “body drop” where two assemblies became a rolling automobile or truck. This process was known as “composite body” construction. At the cusp of the 1960s, American automakers began designing smaller cars using a construction process known as “unit body” where the body and frame became a single welded-together unit. This method was known as monocoque construction where body, frame, and skin became one.

At Ford Motor Company, unit body construction arrived in North America with the Falcon and Comet in 1960, and then quickly spread to Fairlane and Meteor, and then Mustang in 1964. The down side to unit body construction was too much body twist and flex. In theory, unit body construction is strong. Where it falls short is the absence of structure between front and rear frame rails. Convertibles have extra structural components underneath but not above to tie the top half of the car together, so they flex even more than hardtop bodies and don’t yield much confidence over a rough road. Convertibles have a bunch of cowl shake and body chatter, which makes for a miserable ride. Total Control Products (TCP) has a solid solution for classic Mustang body flex with its full-width cross-brace subframe connectors for convertibles.

Mustangs & Fasts Fords OC (MFFOC) has wrapped up its second Showroom Mustang project, a Dark Ivy Green Metallic 1965 restomod convertible known as “Showroom II”. MFFOC has chosen to stiffen up the platform with a complete TCP subframe package (TCP-PKG-SFC-02) designed specifically for classic Mustang convertibles. The TCP subframe connector system installs much the same way on convertibles as it does on hardtops and fastbacks. What makes it different is the cross-brace that ties the subframe connectors to the convertible floor pan torque boxes for added stiffness. Here’s what it takes to install them in the car.

02. With Falcon, Mustang, and Fairlane in the 1960s came unit-body construction, which was lighter and less complicated with one assembly line instead of two. Here, assembly workers do a body drop at Dearborn, Michigan where Mustang and Fairlane bodies were dropped onto the rear axle only. Chrysler copped a name for unit body construction—Unibody. By the way, this is April 4, 1964 at the Dearborn assembly plant.

05. Take an awl or scribe and outline where you will need to remove paint/undercoating for welding purposes.

06-07. Paint must be removed from mating surfaces to ensure a solid weld. Do this around any surfaces you intend to weld.

08-09. The TCP subframe connector has been prepped and is jacked into position for welding. Note the flange is flush.

10. Once the flanges are welded around their perimeter for solid security, the TCP subframe connectors become an integral part of the unit body. The connectors make up for what Ford didn’t do between front and rear frame rails—they provide structural support between the frame rails.

11. The cool thing about the TCP subframe system is this sturdy cross-brace, which ties the two sides together for unparalleled security. The cross-brace is temporarily fastened to the subframe connectors and aligned with the convertible reinforcement box connector plate. Four holes will be marked and drilled into the connector plate as an attachment point for the cross-brace.

13. Convertibles have floor pan reinforcement boxes beneath both seats for stiffness connected with this bolt-on plate. The plate is removed to drill holes for the center subframe connector, and then reinstalled and the cross-brace is connected to the plate and bolted in as shown.

14. All subframe connector and cross-brace bolts are tightened.