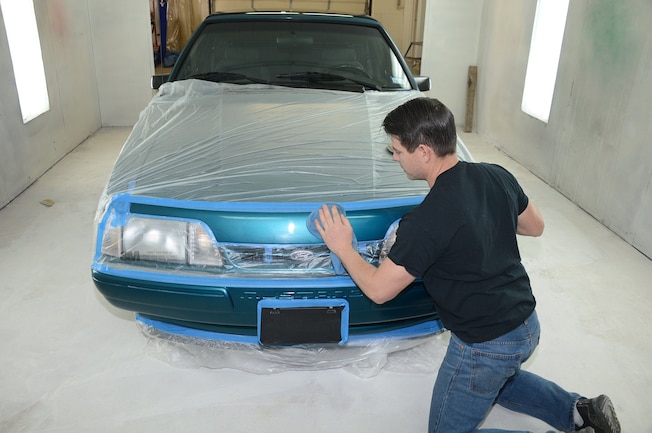 Nobody wants a rock chip on a new paint job, especially not Jason White, a professional painter. White recently sprayed a fresh Reef Blue Base Coat Clear Coat on his 1993 LX 5.0 and wanted to protect the frontend, but how?

Applying precut clear sheets is one way to go. White has installed a lot of these protective kits for customers, but he went on to tell us that the clear sheets are thicker than conventional decals, and installation can be a bit challenging when laying out larger pieces over a greater surface area.

For his LX 5.0, White weighed in on a fairly inexpensive way to protect his paint. He opted for 3M’s Paint Defender Spray Film, which is available through a variety of local retailers. For the do-it-yourself crowd, you will be happy to know that spraying on this protective film proved fairly easy; after a thorough washing, it only took 40 minutes from start to finish.

1. 3M’s spray film solution costs about 30 bucks and comes with an application kit, which consists of masking tape and plastic sheeting; Paint Defender spray film (an aerosol spray can); Synthetic Wax Protectant; and a plastic spray trigger that snaps on the spray can.

2. Jason White wanted to protect the front end, which is stock except for a 2004 Mach 1 lower spoiler. He had already driven the car 3,000 miles and was lucky to have no road rash.

3. White began by reverse-taping the front lip of the hood.

4. Reverse taping leaves the sticky side up. White then added a pair of vertical strips to pull the sticky edge down so it would lie flat.

5. We should note that White did not want to spray his entire hood. Instead, he wanted to focus on the frontal area.

6. White taped the top horizontal edge of the bumper.

7. In order to prevent overspray, White went ahead and taped plastic sheeting to the top of the hood.

8. White also covered the sides of the bumper and valance with the plastic sheet.

9. In order to trim the excess plastic sheeting, like here at the back of the hood, be sure to use a new razorblade for a clean cut.

10. Continue taping the plastic sheeting over everywhere you want to avoid overspray.

11. The lower valance area was left exposed. However, White went ahead and taped the edges of the license plate bracket.

12. Finally, White stuffed paper into the openings of the lower valance to avoid any overspray as well.

13. With taping complete, the next step is to apply wax over the surfaces that you intend to spray. Also, be sure to wipe off the wax with a microfiber towel for a perfect finish.

14. The front end was ready to spray with the Paint Defender spray film; to begin, snap the spray trigger onto the aerosol can.

15. The plastic spray trigger reduces fatigue and works much better over the conventional button and even acts like a spray gun.

16. Apply several coats of 3M’s protective film to the paint. How much you use is really contingent on how much protection you want.

17. You can also mask off and spray other areas, such as the rear quarters, to help shield them from rubber when you’re doing burnouts at the dragstrip.

18. After about an hour the spray film was dry, so we pulled off the plastic sheets and tape.

19. As shown here, White recommends pulling the tape off slowly at a 45-degree angle.

20. The spray is mostly dry, leaving a slight orange peel, but it doesn’t affect the color.

21. At just the right angle and light reflection, we could see the faint line between the 3M coating and paint.

22. White was very pleased with the outcome. He now has protection from road rash, and best of all the coating will peel off easily without damaging the paint whatsoever.