The Cure for Bad Gas

What to Do About Contaminated Gasoline and a Damaged Fuel System 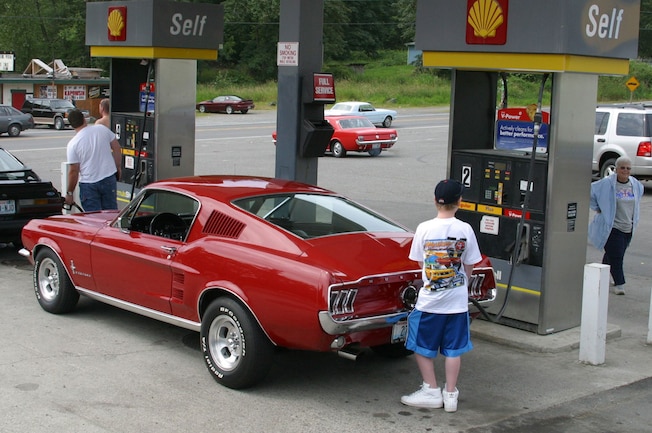 Few things smell or perform worse than bad gasoline. Gasoline does not live long in our classic Mustang fuel tanks, especially in light of the additives used to boost octane and clean up emissions these days. Today’s gasoline isn’t your father’s gasoline. That said, what happens to gasoline when it sits in your fuel tank for a long period of time?

The additives that make gasoline suitable for engine function tend to evaporate over time, causing fuel to become less volatile and more vulnerable to contamination and deterioration. Oh sure, turn the key and the engine will start. But it isn’t going to perform as well as it would with fresh gasoline. This is why it’s important to keep your Mustang’s fuel tank topped off, which makes the fuel less likely to suffer from these issues. Low fuel levels make fuel vulnerable to condensation—water in the fuel—and further decline.

You have to think of gasoline much like you should brake fluid. Mineral-based brake fluids (DOT 3) absorb moisture over time, even when inside steel lines and reinforced rubber hoses. As a result, brake fluid must be flushed and bled every two years, along with the cooling system. Oxidation occurs in gasoline similarly to brake fluid. Another enemy of gasoline is the moisture in the atmosphere. Oxidation and the absorption of moisture conspire to turn useful gasoline into ugly, stinky varnish inside your fuel tank, lines, and carburetor. In this new age of ethanol fuel additives, the scenario is even worse because ethanol (alcohol) absorbs moisture at a more aggressive rate.

What to do About Bad Gas

Bad gasoline has a definite aroma on a par with old varnish. It is extremely pungent and has a horrid smell. It is also darker in color, turning brown and sometimes green if it’s really old. By the time gasoline becomes this bad, it will not burn in your engine. It must be collected and properly disposed of to protect the environment (please, no jokes about using it as a weed killer). The challenge these days is where to dispose of it. We’ve found waste-disposal companies and local municipalities that will take all kinds of household waste. They will not, however, take old gasoline. Any waste-disposal companies that will take old gasoline may charge a sobering amount of money to take it. Every region has a different policy. Check with local authorities to determine the best course of action.

Classic Mustangs do sit sometimes for weeks and months at a time. This means the fuel deteriorates in the tank, lines, fuel pump, and carburetor, causing serious problems that must be dealt with before you can drive the vehicle again. In the nearly 40 years Mustang Monthly has been in print, we’ve seen countless examples of fuel systems damaged by old gasoline. We’re working right now on a 19641/2 Mustang convertible that has been sitting for many years. We had installed a fresh Autolite 4100 from Pony Carburetors (no longer in business) many years ago to get this original-owner Mustang back on the road. The car was driven for a while before clutch problems sidelined it again.

Cursed with a quarter-tank of really bad gasoline that has been sitting for many years, we concluded this Mustang needed a new fuel system from Drake Automotive Group. Drake set us up with a stainless steel 16-gallon tank, sending unit, hardware, fuel hose, fuel hard lines, fuel pump with filter, and the pump-to-carburetor line. Virtually everything you need for a classic Mustang’s fuel system is available from Drake.

You have many options in replacing a fuel system. Here’s what you’re going to need to know going in. Today’s fuels are really harsh, so you need to know how to cope with the many resulting issues. We’re going to walk you through this process in hopes of getting you back on the road quickly.

The Scott Drake stainless steel fuel tank for classic Mustangs is virtually corrosion free. It doesn’t rust—period. What’s more, it looks sharp and can be polished. Although, it looks good right out of the box. This is the 16-gallon 1965-1968 Mustang stainless steel fuel tank with everything, including the 1967-1968 fuel filler neck. If you want more range, opt for the 1970 22-gallon fuel tank, which is easy to install in any 1965-1969 Mustang.

Drake has all of the lines to get your fuel system integrity back, such as the brake lines and fuel lines. All are pre-bent and ready for installation.

The Mustang tank is a drop-in unit that also forms the trunk floor, which makes fuel tank removal straightforward. Sheet metal screws hold the tank in place. We’re going to show you how to make the Mustang’s drop-in tank safer using the bolt-in approach. Remove the fuel filler neck and hose first.

The sending unit for the fuel gauge is disconnected underneath.

If you have a fuel tank without a drain plug, drain the fuel at the pick-up. You are better off cutting the hose and allowing fuel to drain into a sealed container. Wear protective gloves regardless of how old the fuel is. Additives in today’s fuels are harmful to your health, making the use of gloves critical.

The fuel tank lifts up and out of the trunk floor. Although protective gloves aren’t worn here, you should be wearing them.

It’s advisable to place 3M’s Strip-Caulk, known as “Dumb-Dumb” between the new tank and body.

Position the new Scott Drake stainless 16-gallon tank in the trunk floor. You have two choices to secure the tank: the Scott Drake screw kit or 5/16-inch bolts, washers, and locknuts. Another option is using Tank Armor on top.

The filler neck has been installed. Locate the screw side of each clamp toward the tail panel, which prevents damage to contents placed in the trunk.

Install the fuel pick-up hose next with spring-loaded clamps. You do have the option of the provided Scott Drake hose kit or a high-pressure fuel injection hose from a part’s store, which tolerates today’s harsh fuel additives (ethanol). If you drive your Mustang daily, the high-pressure hose is best.

If your fuel system is trashed by bad gasoline, we suggest replacing all fuel lines. If you have a convertible, you’re going to need to remove the chassis-reinforcement plate at the transmission tunnel for bodyline replacement. This is the way the body fuel line was routed from the factory on 1965 to early 1967 Mustangs, which made it vulnerable to damage. We’re going to show you a better way.

Beginning in the mid-1967 model year, Ford rerouted the body fuel line along the left hand framerail through the torque box, which is safer. If you own a 1965-1966 Mustang, there is no torque box in this area, unless you have a convertible. However, you can still route the 1967-1968 fuel line through this area. The forward bodyline is tied to the main bodyline with a 3-inch length of high-pressure fuel injection hose and clamps.

The beauty of these pre-bent Scott Drake fuel lines is ease of installation. This is a Drake Automotive 1967-1968 main bodyline being installed on a 1966 Mustang for safer routing. This approach gets the fuel line out of harm’s way.

Drake provides a complete hardware kit to secure these bodylines. You may use the factory-style crimp clips or screw-in clamps like this one.

You also have the option of ordering raw tube stock and bending your own lines. Or custom bending pre-bent lines to suit your own agenda. Pre-bent lines sometimes need help with fitment.

Adel rubber-lined clamps are another nice choice for your fuel-system replacement. You may use them with your Scott Drake pre-bent lines. Lines are available in galvanized and stainless steel, which offers the greatest corrosion protection.

Drake offers OEM-style sealed fuel pumps that resemble the original Carter pumps. Prior to 1966, these pumps had an integral spin-on fuel filter. Drake also offers the OEM Ford filter can for your concours restoration. While replacing the fuel pump, turn the engine’s crankshaft until the distributor rotor lines up with #1 cylinder. Grease the pump arm where it contacts the eccentric.

VP Racing Fuels has a nice line of mail-order fuel for classic Mustangs. We’re talking high-octane leaded and unleaded fuel. It is suggested you run unleaded fuel in your daily driver for cleaner emissions and reduced deposits. These are world-class highly refined fuels that will stay viable longer in your fuel tank.

Our Autolite 4100, damaged by bad fuel, has been torn apart and freshened up to be placed back in service. Once properly tuned and adjusted, it will run like these old shoebox carburetors. The Autolite 2100 (2V) and 4100 (4V) are undoubtedly the best Ford carburetors ever made. Use a dual-throttle spring for safety.

Two modifications are strongly suggested to enhance safety in a classic Mustang. Use the Tank Armor steel cover, along with a bolt-in tank installation. Go with 5/16-inch Grade-5 or -8 bolts, flat washers on both sides of the tank and trunk floor, and locknuts. And finally, install a steel rear seat barrier behind the back seat.