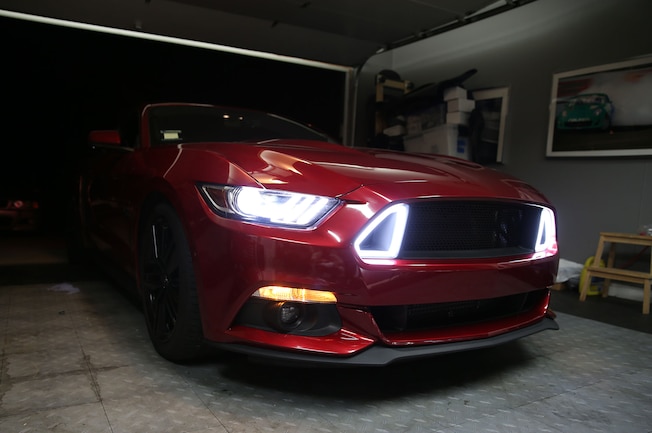 A grille upgrade has been a popular modification since Mustangs existed; take foglights out when they were installed from the factory or put them in when Ford forgot to build the car with them. It always seemed like the way to go was the opposite of however Mustangs came equipped. But what if there was an all-new grille design that included the latest in LED technology? That’s sure an enlightening perspective.

We are going to spoil it right up front and say that AmericanMuscle (the official supplier for RTR) and RTR have come up with something that will soon be copied to other domestic makes and models in the near future. It might be a little more expensive than other conventional Mustang grilles; however, for $749 it comes complete with the upper and lower grille assembly, including our favorite portion, the LED lights. Believe us—when you see them in person for the first time you’ll understand why.

The upper grille is designed specifically for the RTR lights and cannot be purchased separately. Since it is a design-specific grille, it fits like it should. Recesses in the molding even tell you were to drill. Yes, it’s that easy to install.

Halos for headlights are nothing new, but shaped halos used in grille applications aren’t found very often. The claim to fame (and why the halos alone cost $299) is the high-powered SMD technology. This means that these halos will produce superbright white light while claiming to consume only a tenth of the power of an incandescent bulb, all while lasting for more than 100,000 hours of continuous use.

The lights grab their power from a jumper harness that plugs in between the factory running lights (namely the Mustang's existing factory headlight harness) and doesn’t require any cutting or splicing. And due to the miniscule amperage draw, no fuse upgrades are required. The grilles themselves swap out just like the stock units.

Our Ruby Red EcoBoost is a Premium Package car that has a host of bolt-on parts to make more horsepower and go faster, but it lacked any considerable visual upgrades above the factory-equipped parts. We were about to make this EcoBoost look as fast as it really is.

01. Our Ruby Red S550 EcoBoost has already had a GT grille installed, but we planned to make it look even better.

02. There is a small baggie of screws with lock washers. Absolutely don’t install the screws without the washers or they will break through the plastic of the halos—everything is precision fit. For some unknown reason you get a few wire taps as well; throw them in your electrical parts drawer for another project because you won’t be needing them.

03. A flathead screwdriver makes quick work of removing the pushpins in the upper radiator cover. Be careful when removing the pin holders because they love to fly across the room.

04. Remove the course-threaded bolts along the top, including the two 7mm bolts on each side near the headlight. If you don’t have a 7mm socket, a 7/32 works just fine.

05. Two pesky 5.5mm bolts sit in the corner of the bumper where it meets the fender. You will have to pop out a few more fender liner pushpins to get to them. Once it’s out, pull the corner of the bumper softly up and out and it will pop off. This bumper has been on and off twice already (the aforementioned GT grille install along with an intercooler upgrade), so these clips are getting pretty haggard.

06. Now it is time to crawl under the bottom of the car to remove a several bolts and a few pushpins that hold the splash shield in place; it comes off as one giant piece. This is the time when we tell you that the car should already be jacked up by now.

07. Unplug the two front marker light plugs and foglamps on each side; it’s easy to get to while you’re still under the car. Lift up on the bumper cover to clear the dowels, and pull it straight out.

08. Normally there is a center plastic bumper support that needs to come off before you can get to removing the upper and lower grilles. The one for our Mustang went missing. The tabs on the grille need to be pried up on the top and down on the bottom. Start at a corner of the grille, either on the left or right side, and work your way across. Then do the same on the bottom grille.

09. Before the grille is installed you’ll want to drill out the three recesses on each side so the halo can be mounted into place.

10. We already told you once: Don’t forget the lock washers or you’ll be sorry. You may need to push the screwdriver a bit to get the screw to grab.

11. We originally installed the box on the side, but the wiring was too tight once it was on the car. Install the converter box on the bottom of the air inlet opening instead.

12. Unclip the large plug on the daytime running light “gills.” You will have to reach up behind the light a bit to get to it. While the passenger-side adaptor was easy to plug in, the driver-side harness that plugs into the headlight fought us a bit. The RTR headlight adaptor does have a locking clip that needs to be slid back before locking in place.

13. A support bar behind the headlight serves as a good place to zip-tie the other side of the adaptor harness to.

14. Even with the lights off, the RTR grille looks awesome. The halos have a natural dark gray appearance that will go with any vehicle color

15. The wow factor is at full tilt when RTR halos are lit up. They are superbright and extremely white—almost bright enough to not need your headlights, but of course, never do that. The light is extremely uniform and looks like it could have come from the factory this way.