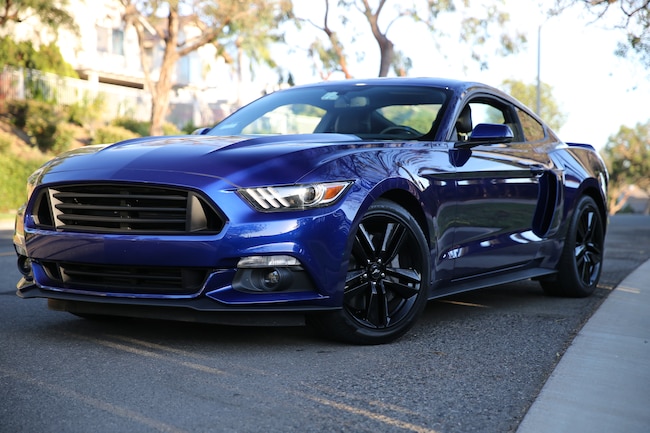 One of the smartest moves any aftermarket parts supplier has ever made was what AmericanMuscle did with its prepainted parts option. The most hellacious and daunting activity is finding a painter. On one end there’s the “bro deal” that could take up to six months and come back with more fisheyes than you would care for. At the opposite end is the highly respected painter who wants $500 to paint a spoiler because it’s not worth his time otherwise.

Then there’s the no-hassle version from AmericanMuscle—a healthy selection of prepainted parts that’s painted with the same paint Ford uses and won’t cost you an arm in a leg. AM can offer these parts at such a great discount because AM runs several sets of the same color and not piecemeal by order. This also assures customers that most prepainted parts are in stock and ready to ship.

We wanted to pick three items that would help accentuate the exterior styling of one Deep Impact Blue 2016 EcoBoost Mustang, so we chose:

Our EcoBoost was a Premium Package car; therefore it didn’t come equipped with a factory spoiler. Needless to say we weren’t looking forward to drilling holes into someone else’s paint. The spoiler comes mummified in protective foam to keep the paint free of scratches and also comes with a few screws, strips of paper, and some alcohol wipes. These four strips of paper are supposed to be the template. At first we thought someone was playing a joke on us, but they actually worked quite well.

A small adhesive pad circles around the bolt hole; these are to be carefully applied to the center of the spoiler’s bolt holes and then test-fitted onto the trunk. The MMD spoiler is designed very well. It is easy to square it up on the back of a S550, since it flows with the body line. Once the position is set, all we had to do was use painter’s tape to secure the long portions of the strips and then carefully pull the spoiler away. Take a deep breath and drill into that beautiful paint. Before removing the adhesive tape from the spoiler we bolted it in place to make sure all the holes lined up.

The side scoops took a whopping 10 minutes to install. The most time-consuming portion was cleaning, edge prepping, and applying the adhesive to the scoops. Much like the S197 Mustang, the side scoops basically key into the body lines on the top and bottom portion of the scoops. After a test fit, they went on supereasy.

With the prepainted parts completed we moved to the grilles. The front bumper cover comes off pretty easily, but you will need a host of small sockets (5.5, 7, and 8 mm) to do this job. About a million bolts and a handful of pushpins hold the bottom splash guard in place. If you have a light impact drill, we suggest breaking it out for this. The radiator shield hides a few more bolts on the top of the bumper and, finally, one bolt on each side that holds the corner of the bumpers, which then allows the bumper cover to be removed.

Another gaggle of retaining clips molded into the bumper need to be pried in order to get the grilles out. It is best to pull the grilles out from behind, snap the new ones in place and viola, you’re done.

In about half a day’s work we were able to dramatically improve the look of this S550 Mustang. Regardless of whether you’re in the sun or shade, the paint matches flawlessly. Thumbs up to MMD for building high-quality parts that fit incredibly well.

01. The lines of the S550 are clean and subtle, designed for a world market. It was time to Americanize ours.

02. Performance Package cars don’t come with a spoiler. We aren’t exactly sure why that is, but nonetheless we were going to fix the problem.

03. You will need to clean and edge-prep the side scoops before installing them. There are three flat spots to attach the double-sided tape to, so this process is pretty straightforward.

04. Be sure to test-fit the side scoops before you remove the backing on the double-sided tape. As you can see, it fits cleanly to the body line. We used a non-ammonia-based glass cleaner to clean the side of the car before installing the side scoops.

05. Moving to the front grille install, remove the upper radiator cover with a variety of pushpins. This will expose the top bolts on the bumper cover.

06. Remove the course threaded bolts along the top, including the two 7mm bolts on each side near the headlight.

08. Unplug the two front marker light plugs per side after removing the splash shield. Lift up on the bumper cover to clear the dowels, and pull it straight out.

09. The center plastic bumper support needs to come off before you can remove the upper and lower grilles.

10. These painted plastic clips that are molded into the bumper are what hold the grille in place. The ones on the bottom will need to be pried down with the top pried up. Start at a corner of the grille, either on the left or right side, and work your way across. The same will be done on the bottom grille.

11. The bar-style grille looks much more aggressive than the traditional honeycomb-with-running-horse grille, and we like it.

12. Simply line up the upper and lower grilles with the tabs, and push the grilles in place. They should all make a snapping sound as they engage. Check each one before reinstalling the center bumper plastic support.

13. Now it’s time to do everything in reverse to get the bumper back on the car.

14. Moving onto the rear spoiler, remove the pushpins and two rubber mounts to get the trunk lid cover out of the way. There are also two plugs on the far sides of the lid where you’ll access the outside bolts for the spoiler.

15. Those little strips of paper used for the template have a light adhesive backing. Make sure you center the hole perfectly over the hole in the spoiler before sticking it in place. Carefully position the spoiler on the back of the Mustang. The MMD spoiler follows the body line very well, and it will be easy to get it lined up.

16. Once done, use some painter’s tape to hold down the paper strips and pull the spoiler away.

17. Start with a smaller drill bit or use a punch before stepping up to the fullsize bit. This ensures that you’re drilling the center of the hole as clean as possible.

19. Four mounting screws with washers hold the spoiler in place and mount in the stock location. This hole is normally hidden behind a rubber plug.

As we said at the beginning of the story, MMD’s prepainted parts not only fit perfectly, but the paint looks equally as stunning too. The lines of the S550 are subtly accentuated with these precision-made components. In a matter of four hours we were able to dazzle up our Mustang without breaking the bank.