Missing VIN plate? That’s a Problem on a 1968 Ford Mustang

Now You See It, Now You Don’t: The conundrum of missing or corroded 1968 Mustang VIN plates 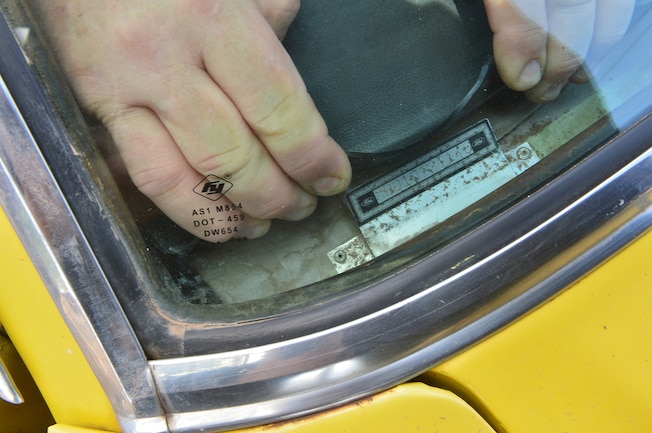 We were jumpier than a cat next to a rocking chair. Several weeks after purchasing a 1968 Mustang convertible we realized that the VIN pate was nowhere to be found. At first we thought it was no big deal. After all, we found the factory stamping of the VIN on the inner fender apron under the hood—the fenders were off and the stamping was easy to see. Isn’t this factory stamping enough to verify the identity of my car?

To our surprise, the legal answer is a big fat no. With no VIN plate, selling the car could be difficult. The police might come out and issue a new VIN, and that puts a big blemish on the car’s provenance. At worst, the police might actually confiscate the car.

So we dug further into 1968 Mustang VIN plates and discovered that in 1968, part of the Federal Motor Vehicle Safety Act required every car’s VIN to be displayed on top of the dash and visible through the windshield. This law applied to GM, Chrysler, and other domestic makes starting with 1968 models. This new location made common sense. For example, if a policeman needed to check the VIN on a Ford, he would need to open the hood. On a General Motors or a Chrysler product, the VIN on pre-1968 models was affixed to the doorjamb, requiring the officer to actually bend down and put his back to the driver—not a good position if there is funny business going on, such as a stolen car. For 1968 and later models, the officer can remain standing and simply look down through the windshield as he faces the occupants of the vehicle.

As we checked with other owners, we soon found problems with 1968 VIN plates. For instance, Bob Becker (who sold us the car) said he already knew the VIN plate was missing on his wife’s 1968 coupe. Apparently, when his wife’s father bought the car more than 10 years earlier, the seller explained that the VIN on the door data plate did not match the VIN on the title because the door had been changed years before and the new door was from a 1967. Becker knew better and matched the VIN on the title with the VIN on the inner fender apron under the hood. He could tell the original dash pad had been replaced and wondered if the new dash pad had been pulled over the VIN plate. Sure enough, Becker peeled back the dash pad and was very relieved to discover a VIN plate still riveted to the metal top of the dash. And yes, the VIN matched the VIN on the title. Apparently many restorers have made this same mistake: covering up the original VIN plate when installing a new dash pad.

Bob Becker removed the inside molding around the top edge of the dash and then peeled back the dash pad on his 1968 coupe to reveal the original VIN plate.
Becker used his fingers to slip the dash pad underneath the VIN plate, located on the passenger side top of the dash. The plate must be visible, of course, for law enforcement.
This is the view many 1968 owners see on the passenger side top of their dash: plain black vinyl. That’s often because the dash pad has been replaced and pulled over the VIN plate.

Over the last 40-odd years, these aluminum tags have shown to be very susceptible to corrosion, especially if they get wet. In fact, moist climates have eaten away some 1968 Mustang aluminum tags so severely that they just fall off. Ford changed to stainless steel plates in 1969. The tags attach to the top of the metal dash with common, everyday hardware store rivets, making them very easy to remove and therefore easy to steal and replace—whereas a stamped VIN on an inner fender apron is not easy to steal or replace.

Our big problem remained. Our VIN plate was missing. What can an owner do if his tag is gone? We knew for a fact that this 1968 convertible was the one on the title because we matched the digits of the VIN on the title with the VIN Ford had stamped into the inner fender apron. But what if the police ever pulled us over and tried to match the VIN on the insurance papers versus the VIN on the car. They would look to the top of the dash and we would have some explaining to do—and most cops do not understand old Mustangs.

We could pull back a fender to show a VIN stamped on the top of the apron but that’s not feasible on the side of the road. The police might then call for a tow truck to confiscate the car, a situation that nobody wants to deal with. So we really wanted to find that old tag. The wrinkled original dash pad was long gone and all we could see was the metal dash panel. Perhaps when the last owner of this 1968 Mustang removed the dash he also took off the old VIN plate?

Several weeks after we had given up we were hunting parts to assemble the car and Becker came running out of the garage where 1968 Mustang parts were stored, screaming and waving a small piece of metal in the air—he had run across the original VIN plate. Had he not found it, we would have had to either make one ourselves or find a vendor who would make one for us, but depending on the state you live in, making a new VIN plate could be illegal. We contacted several vendors, and not surprisingly they do not want to make Mustang VIN plates because they fear trouble with law enforcement. What if the owner is lying? The vendor could be complicit in a crime.

A state official, probably one unfamiliar with vintage Mustangs, might want to issue a new VIN for the car after we proved ownership, but a new state-issued VIN does not include the fifth character of the VIN, which codes the identity of the original engine. And of course Mustang owners don’t want that, especially for a high-performance specialty model. Although the VIN plate moved to the driver’s side of the dash in 1969, the plate can still be missing.

So in summary: The fender apron stamping is not enough. The 1968 VIN plates are easy to lose, so when considering buying this year of Mustang, make sure the VIN plate is intact and matches the title, or you’ll have to deal with what we just explained here.

Finding our original 1968 Mustang VIN plate, which matched the VIN on the title, was a huge relief.
The VIN plate fits into a prescribed location, defined by holes on the passenger-side top of the metal dash. The plate is more than a flat plate; it is slotted to fit the lip of the dash pad.
You’ll have to remove the windshield in order to install rivets with a rivet gun. Ford used ordinary hardware store rivets for the 1968 VIN plate.
Here is an example of a severely corroded 1968 VIN. When this plate is missing or corroded as to be illegible, some collectors call upon craftsmen in the hobby to make another tag. Showing a corroded tag, even if the VIN numbers are visible, could be illegal.