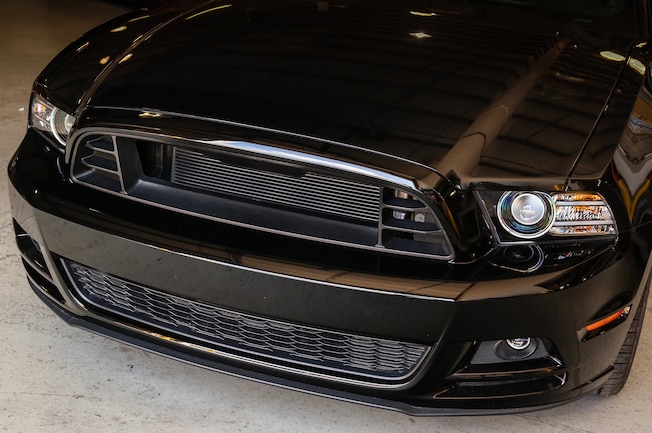 Traditionally, one of the more obvious distinctions between any given year’s Mustang models can be found in their upper grille designs. For 2013-2014 in particular, the V6, GT, and GT500 each have a distinct grille personality. The V6’s grille is unassuming and retro. The GT500’s is sharklike and aggressive. The GT’s falls somewhere in between. Changing out that OEM GT or V6 grille element can give your ride’s snout a whole new level of assertiveness, and Classic Design Concepts has made such a swap simple with its wide-open Performance Grille replacement.

Ford engineered the Mustang’s grille for easy, tool-free replacement. This swap is so simple that we can’t even call it a bolt-on because no bolts or screws are involved. Read on as we quickly transform the face of a 2014 V6 (with Pony package) with a look that’s noticeably more menacing and flows more air, giving it added cooling as a bonus.

1. The Performance Grille is an affordable ($199) OEM-quality replacement, pebble-grained and injection-molded just like its factory counterparts.

2. Our swap subject is a 2014 V6 Premium coupe, with the corralled grille of the Pony package, but CDC’s Performance Grille can replace any of the factory grilles whether V6, GT, Boss, or California Special.

3. The truly straightforward swap process begins with laying a protective layer of masking tape atop the fascia in front of the grille.

4. Removing the factory grille, whether V6 or GT, is simply a matter of getting a firm two-handed grip near the outboard ends of the grille . . .

5. . . . and briskly yanking it straight out towards you. Sometimes it takes a couple tugs. The factory grille (and its CDC replacement) is retained by the series of molded-in plastic clips visible around its perimeter. There are no traditional fasteners.

6. With the old grille out, on V6 cars you’ll see three molded plastic vertical bars that have to be removed, as they would otherwise be visible through the wide-open mouth of the new grille. On a GT, the foglights and their supporting molded bracketry also has to come out.

7. In either case, the molded plastic braces/brackets are easily cut out with a hacksaw blade. They don’t need to be trimmed completely flush since the inner perimeter of the Performance Grille will hide the remnants, top and bottom.

8. This is what you’ll end up with after surgery. The A/C condenser and radiator can be left as is, but most of you will opt to darken them. CDC recommends spraying them with black self-etching primer or, as an alternative, flat or low-gloss paint.

9. Our arrow is pointing out a driver-side hole in the hood latch mechanism that will receive an included plastic pushpin when the Performance Grille is installed.

10. Before sliding CDC’s grille into place, it’s worth comparing it to the stock V6 Pony version we just removed. Can you say “unobstructed”?

11. CDC’s Performance Grille installs just as quickly and easily as its factory counterpart came out—just push it straight in until all the clips around the perimeter lock in place.

13. An option available for those so inclined is a “GT” emblem that mounts to the passenger side of the grille.