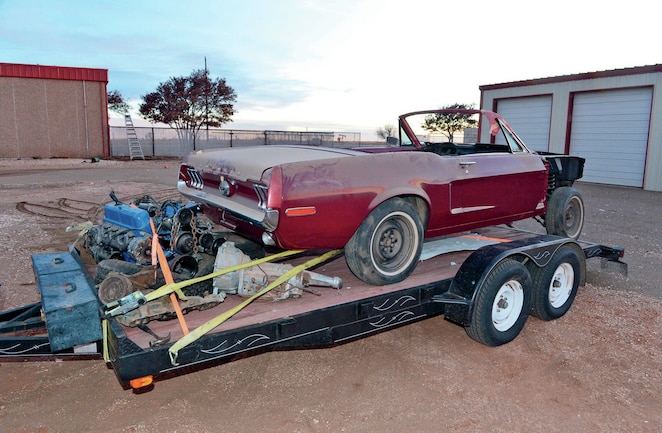 "Gotta have everything out of this garage by the end of next week," Scott White said. "Everything" included a disassembled '68 Mustang convertible. I wasn't ready to buy another classic Mustang, and this one was in pieces. The '68 in front of me was little more than a shell—no engine, no transmission, no interior, no windshield, no front fenders, no grille, no front valance, no front bumper, no top. It had lots of "no's."

Then, why did I feel an attraction to this 289 two-barrel powered convertible? A layer of dust covered the body and yet the Royal Maroon acrylic enamel paint shimmered under the incandescent lights of the garage and hit me at various angles like a twinkle from a pretty girl's eyes. Hmm, the body and paintwork was done. Everything was there, supposedly. Unfortunately eleven years ago Scott White's father-in-law Speck Winborne passed away, halting his great restoration.

I met Scott White to see the '68 and brought along a Mustang restorer, Bob Becker, to help identify parts. He has built many early Mustangs from the ground up. On the garage floor Scott pulled back a plastic tarp to reveal a 289 two-barrel connected to a C4 automatic. This was the original engine, rebuilt a decade past. I spotted a two-barrel intake manifold painted Ford Corporate Blue, and natural finish exhaust manifolds that would have made Bob Perkins proud. "Speck liked his cars stock," Scott said.

Most people would mount a four-barrel on a 289, even though the stock engine was a two-barrel "C-code." I shared Speck's restoration philosophy. To me, the attraction of this Mustang is top-down motoring with a sporty flair and a lively getaway from a stop. The three of us began hunting parts in the garage. Some parts were easy to find, such as the top bows, sprawled on the garage floor. On a table, I spotted hood hinges, already painted. Under a protective white cloth I found a hood laying on two sets of folding sawhorses. For the longest time, we could not find an instrument bezel. Finally, I spotted two of them on top of a garage support beam, very high. One bezel was un-restored and peeling, and the other brand new, fitted with gauges and protected in bubble wrap.

Tom and Troy pulled back a cloth to reveal the stock hood, painted and ready for installation.
Bob Becker pulled back a green tarp to show Tom Anderson (left) and his son Troy Anderson (right) the 289 2V with C4 transmission attached and apparently ready to drop in.

We found tools in the car as Speck had left them. The good news was the dash was already painted and ready for installation of the dash pad and instrument cluster.
TJ was happy to find a new box with carpet underlayment pads in it. However, we did not find any new carpet to go with it!
The afternoon was filled with eureka moments, such as when Tom found two boxes, one with a spare tire cover, and the other with a trunk mat.
Troy and Tom Anderson pulled off the top of a shelf a pair of instrument bezels for the ’68. The wrapped cluster was completely restored and fitted with gauges and a great eureka find. The odometer read just over 59,100 miles.
Bob found the original air cleaner assembly, which was painted and just needs decals to be ready for installation.

Scott pointed at a windshield, leaning against an inside wall of the garage.

"No, it's cracked," Bob said, as he inspected the glass.

The '68 Mustang shared a three-door industrial garage with a '48 Ford F-1 pickup and assorted oil field equipment. The garage was modern and roomy, though dusty like the rest of West Texas. I was trying my best to quell a large case of Mustang convertible fever. I could see lots of work here and I was already assembling a '65 convertible. I told Scott I'd get back to him about buying the Mustang. I knew his timetable. I slept on my decision, and then waited another day to call.

I approximated the cost of parts at $4,000 and subtracted this amount from my offer. Conventional wisdom in the hobby is to be wary of The Project Car. There are literally thousands of parts to a car. It's just so easy to overlook missing parts. Also, how can a person know if a part works, for example, the 289 and transmission? Yes, the 289 had been rebuilt, but what parts inside were new and how did they weather eleven years of storage? Would this engine even start and run?

Scott checked with Speck's son, TJ, who accepted my offer. The fun was about to begin. I needed help getting the car out of the garage and into a shop to begin putting the '68 Mustang back together. The shop would be "Troy's Upholstery" in Amarillo, Texas. Troy Anderson agreed to pick up the Mustang and start the assembly. I snapped pictures retrieving parts and loading the project Mustang onto a trailer with the help of Bob Becker, Troy Anderson and his father Tom, and Tommy Winborne (TJ), who is Speck's son.

Three people pushing and the Mustang did not budge. TJ pulled the car out with a forklift, the driver’s side tire skidding all the way. Troy pulled the wheel only to discover a frozen brake drum. He peeled off the old brake material to free up the axle and drum so the wheel would turn.