How to Install the Mustangs Unlimited Extended Range Fuel Tank 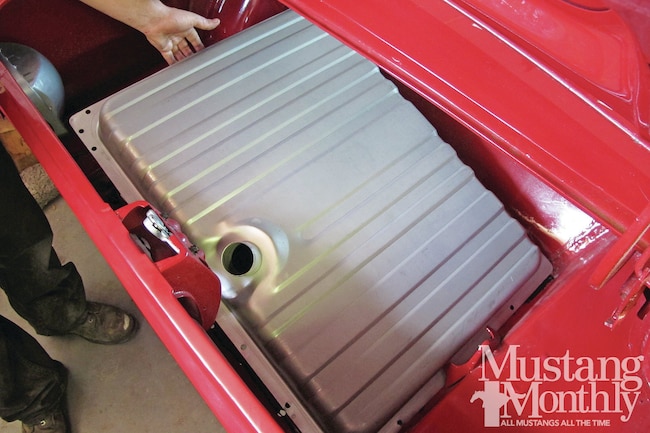 Just a few years ago the majority of vintage Mustang owners we knew had “museum art pieces” sitting in their garages that resembled the shape of a Mustang. Seriously, they’d take their Mustang out a few times a year to the annual local show or maybe trailer it to an MCA National if it was close enough and you would be hard pressed to find five gallons in the gas tank. Today it is a different story. Sure, there are many museum pieces still sitting in garages itching to stretch their legs, but the general consensus seems to have swung the opposite direction to the belief that, as long as it’s not super rare it’s better to get their vintage Mustang out on the road and drive them, as Ford intended when they built them. With the 50th Anniversary just around the corner, we know a lot of people planning to drive to these events via the official caravans.

Making these longer drives today is much more bearable with such upgrades as overdrive transmissions, air conditioning, cruise control, supportive high-back seats, and so forth. Due to the fact that these upgrades, in general, are completely reversible many owners don’t give making these changes for the better a second thought. Driving in today’s traffic with an overdrive transmission, cold air conditioning, and your iPhone plugged in for your favorite tunes really makes the miles fly by. Unfortunately the one issue that still plagues ’65-’69 Mustang owners who drive their cars a lot is the Mustang’s 16 gallon fuel tank. Do the math and you’ll see. The typical small-block with overdrive probably gets about 18 mpg. That’s only 288 miles on a tank, depending upon driving habits, traffic flow, and terrain. If you could up the tank’s capacity to say 22 gallons, then you’d be able to stretch that driving distance out to 396 miles, or another 108 miles. That’s roughly an hour and a half more driving time before having to stop and refuel, and the mileage/time gets better the higher your mpg is!

So you’re asking where do you get a bolt-in 22-gallon fuel tank? Your answer is easy, another Mustang! That’s right; Ford saw fit to equip the ’70 Mustang with a 22-gallon tank to increase driving range. Of course, just dropping in a new ’70 Mustang tank and calling it a day isn’t easy, as the fuel filler position changes. Those that have been privy to this swap (which has been around the hobby as long as we can remember) know that to make it work you have to make your own fuel filler neck or cut and re-weld your existing piece. Even the filler opening in the tank had to be tweaked by use of a jack handle or a section of pipe in the past. Well, it’s the 21st century folks and now you can truly bolt this conversion in with no cutting, tweaking, cursing, or ill-fitting filler neck hose. Frankly, except for the taller tank (which is all above the mounting flange and in the trunk, from outside the car it looks like the stock 16-gallon unit), bolting these parts in is no different than bolting in the stock parts—except you’re gaining six more gallons of fuel! So whether you need the extended driving range, or your Mustang simply needs a new fuel system, consider this slick 22-gallon conversion kit now available from Mustangs Unlimited. At under $200 for the conversion (and that’s including new hardware we added to our order) it’s a great deal!

1. If your vintage Mustang still has a fuel tank installed, you’ll need to start by draining the fuel for removal of the tank. Disconnect the battery and remove the tank’s drain plug to drain the fuel into an approved storage receptacle.
2. With the fuel drained and the drain plug reinstalled, disconnect the fuel line and fuel level sending unit wire from the sending unit/pickup while still under the vehicle. Cap/plug the fuel line to prevent fuel leaks and dirt entry.
3. You generally do not have to remove the fuel filler neck when installing/replacing a fuel tank, but the Mustangs Unlimited kit includes a new filler neck with the proper diameter and angle to mate up to the 22-gallon tank being installed. As such, the stock filler neck gets the heave-ho here by removing the mounting screws in the taillight panel and separating the filler neck from the fuel filler hose.
4. You’ll need to clear out your trunk of any and all items (spare tire, jack, tool kit, camp chairs, etc.), including the trunk mat to make room for removal of the old fuel tank. Remove the self-tapping mounting screws around the perimeter of the tank. There may also be one or two bolts retaining the tank as well at the rear mounting flange.
5. Carefully lift the fuel tank up and out to remove it. Old sealer might be holding the tank firm, so a small screwdriver or a push from the bottom will help break it free.
6. Clean the fuel tank mounting flange and perform any rust/paint repairs necessary before laying down a new application of strip caulk or sealer to the surface in preparation for the new tank.
7. The extra-capacity tank kit includes the proper fuel level sending unit to accurately show the fuel level of the expanded tank, but does not come installed. Use a light coating of grease on the square-cut O-ring when installing the sending unit to prevent pushing/tearing the seal and secure the sending unit with the provided lock ring.
8. Installing the new 22-gallon tank is a simple matter of carefully laying the tank flange into place so that the mounting holes line up. For the ’67-’68 style spare tire bracket, it is required to lower the right side of the tank in first under the bracket, as shown here.
9. We opted for Mustangs Unlimited’s fuel tank hardware kit to make the job easier. New tank—new fasteners is our opinion.
10. Secure the new tank with the hardware kit. Do not forget to reconnect the fuel line and fuel level sending unit wire to the new sending unit. If the fuel hose has any evidence of internal collapse or cracking, replace it now while you’re there.
11. A comparison photo showing the stock ’68 Mustang filler neck on the left, and the custom 22-gallon filler neck on the right shows just how different the tank filler opening locations are and how much tweaking used to be required to get things to line up.
12. Another age old trick that some newcomers to the hobby might not know; use two of the cork filler neck gaskets when installing your new filler neck. The extra thickness will not show when the fuel cap is installed, yet the double gasket trick will keep the fuel cap from scratching the taillight panel.
13. The new filler neck bolts right into the taillight panel with no drama, yet lines right up with the revised tank height and filler position. We picked up new fasteners for the filler neck as well, since the original filler neck screws were pretty rough (and we could only find three of them).
14. The new filler neck is designed to accept the stock fuel cap as well, so no matter the style of cap (in our case an original pop-open unit), it will install without issue.
15. Installing the fuel filler neck hose and retaining with the two factory hose clamps finishes off the installation. The owner’s filler neck hose was in good shape and was reused, though we couldn’t say the same for the retaining clamps. The owner plans to order a fresh pair on his next parts order.
16. As noted earlier in our story, except for the two inches of taller tank height (all in the trunk) the conversion to a 22-gallon tank appears seamless everywhere else. There’s no big fuel tank/cell hanging down past the rear valance, etc. It’s the perfect setup for people who drive their vintage Mustangs a lot.