As much as the commercials we see on television try to tell us, we can’t always get what we want. Sometimes you just have to settle for a little less than your original idea/want/desire due to time, budget, or other reasons. Sometimes it’s just too good of a deal to pass up, even though it’s not exactly what you wanted. Sure, we all want a new Mustang GT with glass roof and the Brembo brake package, or even better, a GT500 or Boss 302. Unfortunately, reality usually steps in and slaps us in the back of the head to wake us up back in the real world where we have a mortgage, kids in college, and a sour economy. So often that dream GT or Shelby becomes a nice little V-6 Mustang. Of course, today’s V-6 Mustang is no slouch with 305hp and we’d certainly be excited to have one in our own garage.

However, many of the V-6 Mustangs built have been the base package content and not the Premium or Pony packages, so if you’re looking for a nice V-6 driver you’ll often miss out on some of the nice upgrades found in these packages, like HID headlights, fog lights, rear wing, backup camera, navigation, and more. Some of these upgrades are just simply too difficult to integrate back into the base model Mustang. Take the Microsoft SYNC-based navigation and audio system. You’ll be miles ahead going with an aftermarket solution (you’ll get close, but it won’t be just like the SYNC system, no matter what the audio sales guy tells you). Other upgrades are simpler to integrate into the base V-6. Take the fog lights for instance. Everyone likes the look of the factory fog lights in the bottom of the fascia and they do a good job of throwing extra light down those dark side streets. Now you can easily add factory fog lights in an easy-to-install retrofit kit from Starkey Products right in your driveway in about an hour and a half with just a few basic hand tools. Check it out in the photos here and then give the folks at Latemodel Restoration Supply a call to order yours. 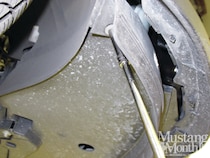 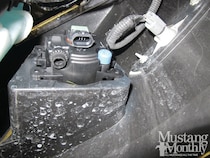 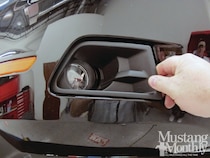 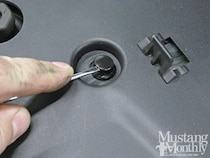 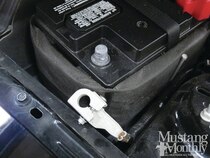 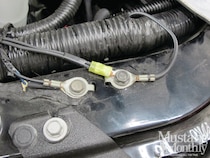 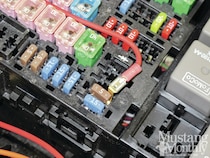 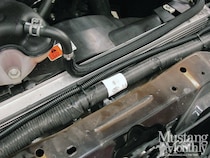 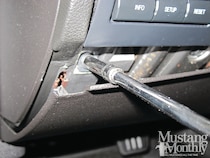 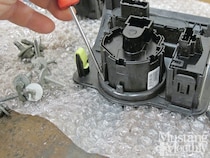 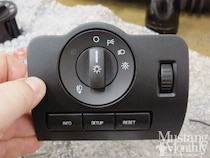 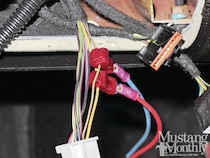