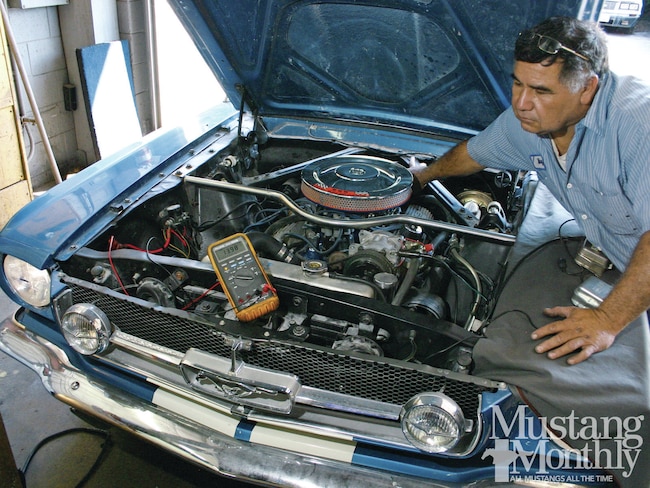 It’s always the same sinking feeling when you notice that the interior lights seem dim as you climb into your Mustang. A twist of the key confirms the miserable truth with a clicking noise from the starter solenoid. The darned thing started fine just the other day! Of course, your imagination runs wild with concerns about the alternator, regulator, or a mysterious electrical gremlin. However, most of the time, it’s a simple problem you can resolve in a short amount of time with basic troubleshooting.

Ray Sanchez of Mustangs Etc. suggests beginning your troubleshooting at the battery. Is it fully charged and will it maintain a charge? Before you get started with battery troubleshooting, Ray suggests wearing eye and face protection along with rubber gloves to protect from battery acid. Keep all ignition sources away from the battery vents. A tiny spark, even static electricity, near battery vents can cause a hydrogen gas explosion and injury.

The battery gets your engine started via the starter and ignition system. When the engine is running, the alternator keeps the battery charged to keep accessories operating and store enough electricity for the next start. A lead acid battery consists of a plastic case with six uniform compartments stuffed full of sandwiched lead composite plates wired in series that react with sulfuric acid (electrolyte) to produce 12-14 volts of electricity. The six cells produce roughly two volts each. As your battery discharges and recharges, it vents hydrogen gas. Lead composite plates sulfate and eventually short out, which is known as a dead cell. If your Mustang sits a lot, it is important to keep the battery maintained via a trickle charger, like a Battery Tender, which keeps the battery fully charged through a regular trickle schedule.

If you have a gel cell battery, the same rules apply. You must keep it trickle charged with some kind of battery maintenance device. Although gel cell batteries are quite forgiving when they sit, they don’t live forever without some kind of charging schedule. Read your gel-cell battery instructions carefully to determine proper charging procedures. Just as important is cleanliness, which eliminates potential current drain across dirt and moisture on top of the battery.

Your troubleshooting efforts should always begin at the battery with a trickle charge (known as deep cycle charging) over an 8-12 hour period at 2-5 amps, followed by a load test to determine if the battery will hold a charge. If you need starting power right away, trickle charge the battery at 5 amps for two hours and see if you have a ready battery. If the battery fails a load test and discharges quickly, there are likely one or more dead cells and the battery must be replaced. And just because the battery started your Mustang two days ago doesn’t mean it’s still a good battery. Batteries can go dead in a matter of hours. Because today’s batteries tend to be sealed, if you can safely remove the caps and test electrolyte, the specific gravity should be well above 1.225 on a warm day.

When purchasing a replacement battery, the numbers you should be most interested in are amp-hour rating and cold cranking amps. The higher the cold cranking amps (CCA), the thicker and heavier the plates and, theoretically, the longer the battery should last. For your classic Mustang, you want 600-800 cold cranking amps at 32 degrees F.

A load test, also known as a battery capacity test, is a measure of a battery’s endurance, which should be three times your battery’s amp-hour rating. Load the battery for 15 seconds and note voltage when you are finished. With a significant 15-second load, you should have a minimum of 9.6 volts, which is what it takes to start an engine. Ideally, you’re going to have 11-12 volts. If you don’t have access to a load tester, Ray suggests using a high-amp load like headlights or the engine’s starter. Turn the headlights on for two minutes and note the voltage both on and off. Or disconnect the ignition coil and crank the engine for 15 seconds. You should still have 11-12 volts. If voltage plummets with the headlights on or during a 15-second crank after a good deep cycle charging, replace the battery. 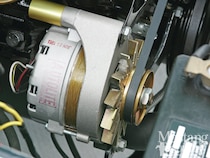 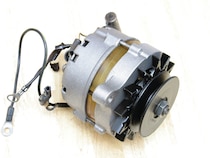 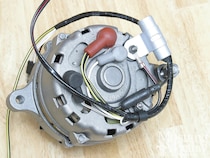 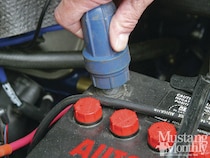 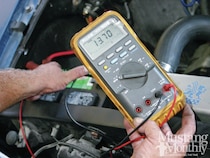 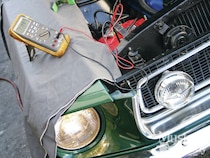 Batteries don’t always run down because there’s something wrong with the charging system. Instead, excessive use of accessories can outstrip the charging system’s capacity to keep the battery charged. This can happen with original Autolite/Motorcraft 38/42/45/55-amp alternators that are incapable of keeping up with modern power amps, electric windows, entertainment, systems, climate control, and a host of other items that can suck a battery dry. We’ve even seen original Mustang alternators that can’t keep up with the engine’s electronics in 5.0L EFI conversions, let alone lights and the rest of it.

There are four basic elements to a Mustang’s charging system—battery, alternator, voltage regulator, and the wiring harness that ties it all together. Before you take your Mustang’s ammeter needle as gospel, consider this. Very few classic Mustang ammeters are still operational. Most burned up internally long ago and haven’t moved in decades. We’ve learned that most plug-in type ammeters need to be bypassed due to potential shorting and the associated fire risk. Most are badly burned up because they were underrated to begin with. They were never designed to endure a Mustang’s electrical system load and must never be used with a single-wire alternator. So forget about using the ammeter. Loop induction style ammeters are common with early five-dial clusters and aren’t as troublesome.

Once the battery is determined to be serviceable at 12-14 volts, look next to the alternator and voltage regulator, along with related wiring. Inspect your Mustang’s underhood wiring harnesses for breaks in the insulation and poor connections that can cause unpredictable operation.

Are You Well Grounded?

Before you start troubleshooting the charging system, check all grounds. Ray tells us that faulty grounds create bizarre electrical gremlins. They can drive us crazy because they’re not always easily understood—one dim headlight, fluctuating instruments, flickering lights, engine abruptly quits, wipers won’t work, battery overcharging, and other surprises. Your Mustang’s electrical system must be properly grounded beginning with the negative battery cable to engine block. Then the alternator to block ground lead. You must have an engine to firewall ground lead to complete engine to body grounding. All main and auxiliary wiring looms must be grounded to the body, which is an integral part of your Mustang’s electrical system, hence the term “ground.”

Though your engine has a direct ground to the battery’s negative post, this does not ensure a solid ground for the car’s electrical system. Why? Because the body is “negative ground,” it carries electricity the same as wiring. The engine to firewall ground strap creates an electrical path from battery to engine to body. Because your engine and transmission sit on rubber mounts, the current has a tough time finding a path to the body (negative ground), which contains your Mustang’s accessories, including the ignition and charging systems. Without an engine to firewall ground, ignition and charging system operation is hit and miss. 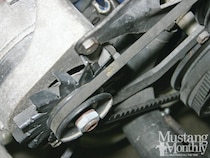 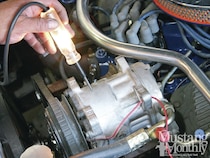 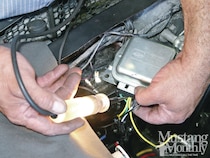 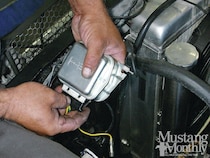 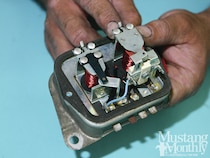 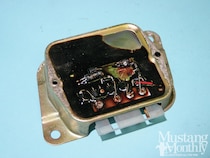 The voltage regulator is a simple switching device that keeps the alternator from overcharging the battery and, at the same time, helps keep the battery charged to 13-14 volts. It is a constant voltage limiter that consists of two forms of control—a field relay and a voltage limiter. Both are electromagnetic switches that work together in a mechanical voltage regulator.

The field relay ties the charging system to the alternator’s field circuit (rotor) with the ignition on and the engine running. The voltage limiter consists of two sets of contact points that control the amount of current provided by the field. When the top contact points are closed, maximum system voltage is applied to the alternator’s field (charging). When the voltage limiter’s lower contact points are closed and the top’s open, there’s no voltage flowing to the field (not charging). Voltage limiter contact occurs more as a buzzing (vibration) than as a solid contact. This buzzy contact occurs at the top contact when the engine is at low speeds. At higher rpm, contact occurs at the lower contact. In fact, this operation can be considered similar to your Mustang’s instrument voltage limiter, which operates in a buzzing fashion (rapid on/off contact) to maintain 5.0 volts. The field relay buzzes rapidly on/off to help maintain 13-14 volts. 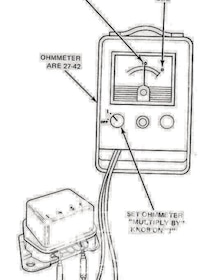 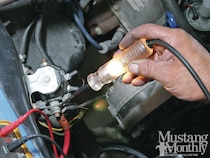 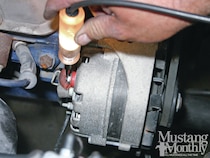 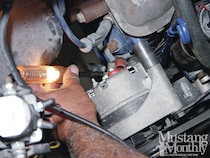 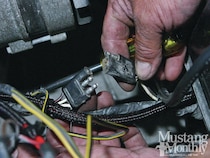 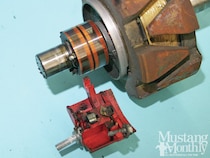 Your Mustang’s voltage regulator is also “smart” because it also responds to temperature changes. When it is cold, your Mustang’s starting system needs more voltage for engine starting. And when it’s warm, the battery needs less charging. This is accomplished via a bimetallic switch, which is temperature sensitive.

It is important to remember not to get jumper or battery cables backwards because this will permanently damage solid-state voltage regulators. A fusible link, more common to ’71-’73 Mustangs, protects the electrical system from reverse polarity (getting the cables backwards). Not all Mustangs will have a fusible link.

Although you can knock an alternator apart on your workbench, not all of us want to do that. You have a couple of choices when it comes to alternators. You can buy a remanufactured Duralast alternator from AutoZone and drop it right into your classic Mustang to get back on the road quickly. You can also buy a rebuilt alternator and swap its internals into your alternator case if authenticity is important to you. Powermaster Motorsports has polished and natural finish Autolite/Motorcraft 60-amp alternators that can be installed in a matter of an hour. All you have to do is swap your alternator harness and plug in. Replace your voltage regulator at the same time. Always replace the voltage regulator and alternator in pairs. 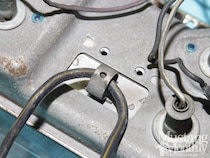 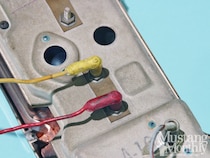