How To Install an Electric Fan

The beauty of electric cooling fans is efficiency. They don't consume power the way an engine-driven fan does. As the engine revs, a mechanical fan takes more power to turn, depending on its design. Electric fans turn at a constant speed as needed without robbing power and fuel.

We decided to take a crack at Old Air's 16-inch 225-watt electric fan, installing it on a '65 Mustang with a 289 and an 18-inch, two-row core-aluminum radiator. It provides 2,320 cfm of air flow. Installation was easy and performance has been exceptional. Once the fan's thermostat is dialed in, cooling is spot-on. The only problem we encountered was the Mustang's 60-amp alternator's ability to keep up. When an electric cooling fan is installed, we suggest the installation of a 100- to 130-amp alternator to keep the battery fully charged. 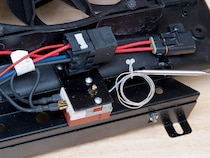 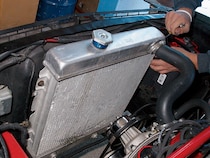 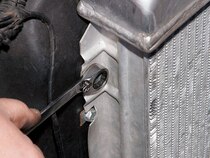 Fit And Function
Electric fan performance depends on proper fit and operation. The Old Air fan should be close to the radiator but at least 1 inch from the tubes. If you get too close, air stagnation issues can cause hot spots. Positioning the fan at least 1 inch from the radiator core promotes good air flow and better cooling. To achieve the proper distance, shim the fan at its attachment points. Maintain enough clearance between the water pump pulley and fan to ensure there's no chance of interference.

When searching for a power source for your Old Air electric fan, never get it from the positive terminal at your ignition coil. Because the ignition coil gets its power from resistor wire, it gets approximately 9 volts from the battery instead of 12 volts. If you connect your fan there, your Mustang might stall when the fan comes on. Get your power from the "I" terminal on the starter solenoid. If that doesn't work for your application, source the power from one of the power terminals underdash that's live only when the ignition is on. Always protect your Mustang with a fuse or circuit breaker between the power source and fan.