With Custom Autosound's USA-5 stereo and CD changer, you can make beautiful music in your vintage Mustang

We've been here and done this before. Many times before, in fact, because upgrading a vintage Mustang's sound-system has been one of the most popular aftermarket modifications since owners began ripping out the puny factory AM radio to replace it with AM/FM, eight-track tape players and cassette decks. Unfortunately, many instrument panels were hacked up in the pursuit of musical pleasures, something not easily remedied on the '65-'66 Mustang's all-metal dash.

That all changed in the '80s when Custom Autosound debuted its aftermarket AM/FM/cassette players with a special '65-'66 Mustang face-place to mount in the original radio opening without modifications. Today, Custom Autosound offers a variety of radios for '65-'78 Mustangs, along with trunk-mounted CD changers, kick-panel speakers, dual dash speakers, and a Backseat Driver amplifier/subwoofer assembly that mounts behind the Mustang back seat. You can even get a '65-'66 dash repair kit to return hacked-up radio openings to stock condition.

Custom Autosound offers several radios for Mustangs, but one of the most popular is the USA-5 with its built-in CD controls for a Custom Autosound trunk-mounted CD changer. With the system, you can load up to 10 CDs and control them from the buttons on the radio. The USA-5 also includes an auto-reverse cassette player, a digital clock, electronic seek-and-scan tuning, and 240 watts of power. It comes with original-style knobs, and the face incorporates a digital display behind an analog dial for a more original appearance when the radio is off.

Classic Creations of Central Florida recently installed a combination of USA-5 stereo, 10-disc CD changer, and kick-panel speakers in a customer's '66 convertible, so we followed along as Merv Rego and Matt Simmons did the installation. 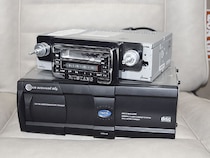 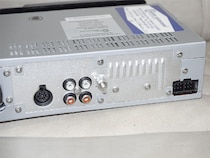 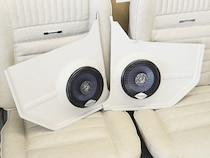