Next Time, We'll Opt For A Root Canal Instead ..

Miles Cook
June 17, 2006
Most of the time we start off a how-to showing the completed job, but with a Fox-body heater-core replacement, that would look the same as when we started. So, we show the disassembled interior. Here, the dash is separated and down from the firewall, and the heater core has been removed. The console, stereo head unit, and gauge cluster are totally removed, and the steering column is dropped. The column doesn't have to be totally removed, but it must come down enough to let the dashboard come away from the firewall and windshield, allowing access to the core inside the evaporator case. Figure on a fully experienced shop taking a full day to do the job. We were at it for a solid 10 hours from beginning to end.

Quite often, working on a vintage or late-model Mustang is fun. A large part of that is due to an intriguing upgrade, such as installing a four-barrel carburetor and intake in place of a two-barrel. Or on a late-model car, it might be something like better brakes, a cold-air kit, or even a supercharger.

This isn't one of those upgrades

Replacing a heater core in a Fox-body Mustang isn't fun or easy. It certainly doesn't make your car handle better, go faster, or stop more safely. But if you live in a cold-winter climate and drive the car with any regularity, having no heat due to a leaking heater core is even more of a drag than this difficult chore. Furthermore, if your Fox is a desirable car on the verge of becoming collectible, like an '87-'93 5.0 LX coupe with a five-speed or even a '93 Cobra, then you have no choice but to go for it.

Basically, there are two choices when it comes to tackling this job. Either face the music at a competent automotive shop for about $500-$600 in labor, or consider doing the task yourself. If you choose the latter, be forewarned: The entire dashboard has to be dropped, the steering column has to be dropped (but thankfully, not removed), and the whole center console must be removed. There are numerous other issues to contend with, and by the time we had the core removed, there were probably about 100 screws and Torx bolts on the floor of our '88 5.0 LX convertible.

As far as documenting the process, the tireless staff at Mustang Country International bailed us out once again. These guys know vintage Mustangs as well as anyone, and they're now tackling the late-model side. As for the heater core itself, Mustang Country has those, too, as does just about any mainstream auto-parts store, for about $25-$30.

But the price of the part isn't the issue here. It's the labor and whether the car is worth the effort. We're showing some of what's involved, maybe half of it, due to space limitations. The other decisions outlined are up to you.

Finally, if you do try this yourself, get a factory Ford shop manual for your car, as it's an essential reference for any work you do. 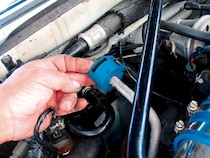 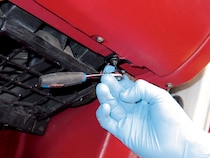 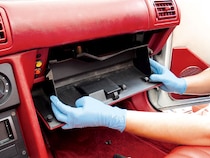 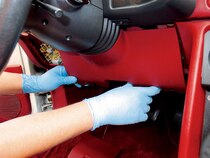 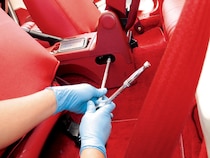