How To Replace Floorpans

What you need to know to replace floorpans

Jim Smart
November 1, 2004
Photos By: Chris Richardson
Rust Busters begins with the seat pans by drilling out the spot welds. Along the transmission tunnel, conventional welds are ground clear. Spot welds have to be drilled out carefully, which separates the pans.

Rust has been a problem for Mustangs for as long as there have been Mustangs. Just several months after the Mustang was introduced in 1964, a Ford Technical Service Bulletin was issued to notify dealers about possible cowl-vent leakage and a fast service department fix. Still, cowl vents leaked all over the carpeting anyway, causing serious floorpan and kick-panel rust-through. This has been the lament of classic Mustang enthusiasts for at least the last 20 years.

Mustang rust doesn't stop at the floorpans. Trunk areas are another problem area because rear-window and trunk-lid seals leaked as much as the cowl vents, causing quarter-panel and wheelhouse rust-through. Front framerails and inner fender aprons are yet another corrosion problem because Ford didn't always galvanize these areas. It certainly didn't E-coat them either, since the first E-coated ones were the '74 Mustang IIs, which were completely dipped in an electrostatic primer process that not only allowed primer to flow into hidden areas, it also promoted good adhesion with the steel.

This shows just what a throwaway car Mustangs were 40 years ago. Absolutely no corrosion prevention here--just raw steel that was never primed or painted. Note the stamped opening in the seat pan of Art's early production '64 1/2 hardtop. This went away later in production.

Art Cairo is a longtime Ford engineer who has been with the company since the '70s. In 1974, he found a Raven Black '64 1/2 Mustang hardtop in the Detroit classifieds for well under $1,000. The ad said, "Owned by the Ford family..." Because Art is fascinated with the Ford family, he purchased the car. Its serial number, 5F07K100148, indicates a low serial number K-car with the original 289 High Performance engine beneath the hood. Art knew the car was significant to Ford history.

During a Mustang Monthly interview in 1983, Edsel Ford II confirmed that the black hardtop had been his father's car. It was assembled at Dearborn and shipped to Ford Design before it was delivered to Henry Ford II. We'll likely never know how often Mr. Ford drove this car, nor how interested in it he was at the time. But we do know this Mustang, possibly the first production Mustang K-car ever produced, was worth saving.

Last winter, Art concluded his Mustang needed to be restored to its original rust-free condition, so he took it to Rust Busters Classic Automotive Restoration in Redford, Michigan, for an evaluation. The body was severely rusted out from the harsh Michigan climate despite being stored inside a garage. By most standards, Art's Mustang was a total loss. Even though it looked sharp on the surface, it badly needed a full-scale restoration, including replacement of the floorpans, trunk floors, and rear framerails.

While the majority of our readers possess neither the equipment nor the skills to replace sheetmetal, this article will give you some knowledge about the procedures involved when you're selecting or talking with your body repairman. 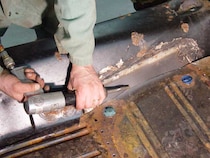 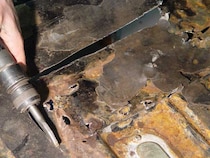 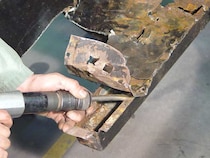 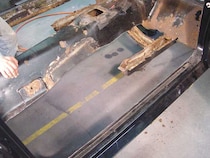 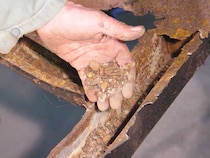 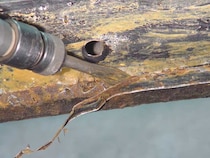 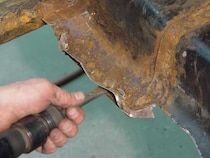 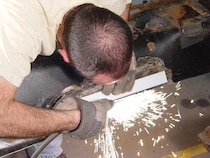 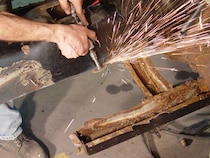