How To Install A New Wiring Harness For Your Ford Mustang

Replace Your Mustang's Electrical System With New Harnesses From Mustangs Plus 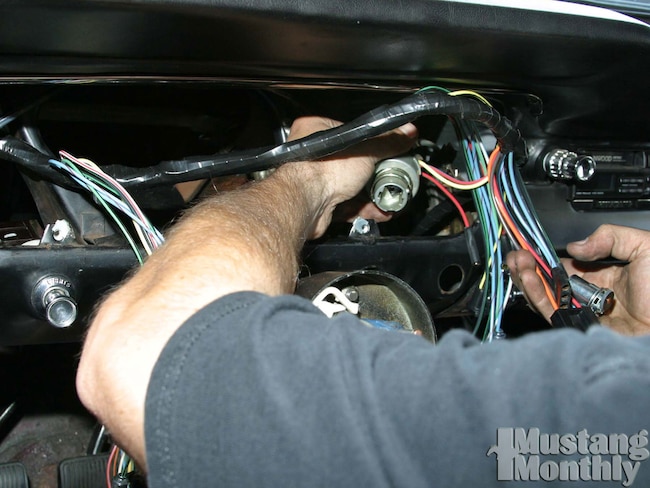 What can you do about flickering lights, a dead sound system, psychotic instruments, undependable turn signals, and horns that don't always work?

Our classic Mustang electrical systems are notorious for grief and frustration, mainly because most are now reaching four decades of service. After 40 years, insulation becomes brittle, exposed copper corrodes, terminals become pitted, and electrical tape begins to roll off. With all of these elements in play, there's potential for problems, even disaster. Exposed copper wiring can ground out against the body or chassis, smoking the harness and starting a fire. Brittle wiring can break, thrusting you into darkness on the roadside. And imagine a bad wiper connection in a rainstorm.

We visited JMC Motorsports in San Diego, California, while they were installing a new stock electrical system from Mustangs Plus. Replacing a vintage Ford's factory electrical system is easy because everything plugs together one way. Firewall connections are easy to pop out and in, and switches plug in quickly. Almost anyone can do it.

When we arrived at JMC Motorsports, the old electrical system had already been removed. Removal of the old system isn't that difficult. It begins with disconnecting the battery. We suggest shooting photographs of your Ford's old electrical system before removal. Zero in on the instrument wiring and everything behind the dashboard. Because Ford designed this stuff for rapid assembly on an assembly line, plugs mate only one way. Grounds speak for themselves, especially when you photograph them before removal. Firewall plugs mate at the firewall to tie the underdash main wiring loom to the headlamp and engine looms. Plugs that tie the main wiring loom to the taillight harness are also behind the dashboard on the left side. The turn-signal switch plugs into the main wiring loom at the base of the steering column.

Always examine potential problem areas before they can arise. For example, we've seen fuse-box screws accidentally run through wiring, causing a short circuit. We have also witnessed wire chafing, which caused the wiring to ground out. Though reproduction wiring looms are wrapped and protected exactly like the originals, we can make them even safer. Plastic antichafe can be used to minimize contact, and you can also wrap the wiring loom with electrical tape for greater protection. Examine how the wiring is routed, which can also be a factor in protection. Sharp metal edges can chew right through wiring, especially when you consider road shock and vibration. 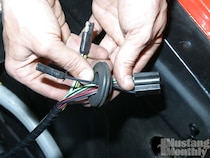 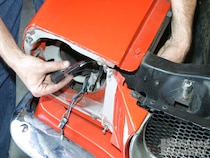 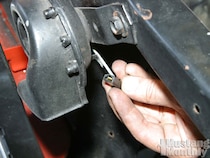 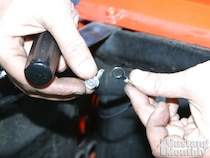 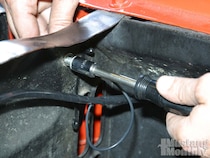 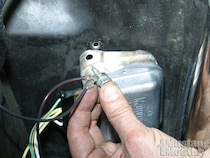 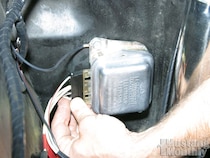 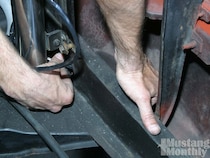 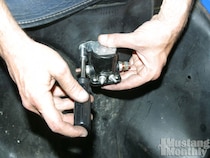 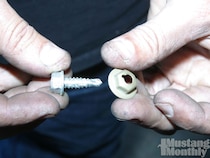 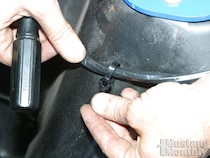 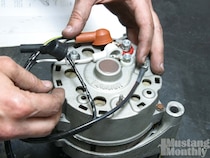 There is certainly some confusion when it comes to '65-'66 Mustang heater fans and switches. For early '65 Mustangs with center-off, two-speed fans, speed control happens at the fan motor. This means we have a three-wire motor, with two wires for speed control and one wire for ground. When Ford went to a three-speed, left-off fan switch, it went to a two-wire fan motor and a resistor pack located in the heater box. It's important to understand these differences when you are ordering a wiring system from Mustangs Plus.

Talk about fast relief from wiring pain. Mustangs Plus makes it a cakewalk, with identical factory replacement wiring. A classic Mustang's electrical system consists of four basic areas. The main wiring loom is located behind the dashboard. From the firewall forward is the firewall-to-headlamp loom. For '65-'66, the engine gauge feed runs from the firewall to the engine and starter solenoid. The taillight harness runs from the dashboard to the trunk area. For '67-'68, the story isn't much different. Basics remain the same for '65-'68.

When you need power for accessories, lights, and the like, you don't have to cut and splice connections. Ford provided female bullet plugs throughout our Mustang wiring harnesses for instrument lights, sound systems, cruise control, and more. Use these plugs for light-load accessories only. Heavy loads, like high-power sound systems and power windows, need an auxiliary electrical system with its own protection. This is a three-hole plug for instrument lights, including the radio and Rally-Pac. There are other plugs for courtesy lights and accessories. Remember, do not cut the harness when you don't have to.

A Switch In Time

While you're at it, replace the switches. Headlamp switches deteriorate with age, causing the circuit breaker to cycle your headlights off and on. Contacts in switches become pitted and useless with time. Corroded contacts create increased resistance, causing heat, and possibly starting a fire. It's also a good idea to replace all of the light bulbs, including headlamps.