Once Limited, Headliner Options For Fox Mustangs Are Growing; Installation Is Easy, Too 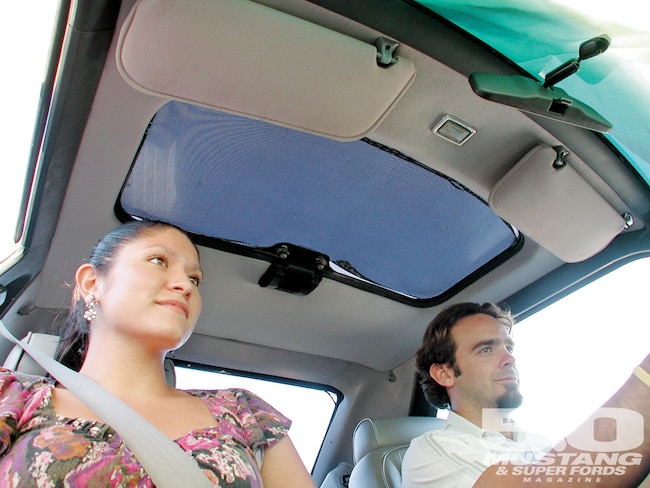 Now that our beloved Fox Mustangs are of at least voting age-our '91 project hatch is now 19 years old-things we've never had to think about have been showing up on our to-do list. In our '91 LX's case, the headliner had been flapping on the back of our head for months. Spray adhesive was helping but not holding, and the vinyl was shrinking-clearly a new headliner was needed.

Fox headliner issues are pretty obvious. Either it's sagging or it's hanging around your ears, plus crumbling orange glue dust is all over your interior. In any case, a failing headliner is a pain.

These failures are characteristic of the cardboard headliners used universally since the '80s. Ford's are typical-built using a single piece of cardboard, with the headliner fabric glued to it. The usual issue is the glue dries out, and the headliner falls away from the cardboard backing and onto your date's hair. While a $15 can of spray adhesive can do wonders for a while, it's impossible to fully rid yourself of the original failing glue. Replacement is the only meaningful solution.

In most Foxes the headliner is some sort of low-nap, mouse-fur fabric. However, on all factory sunroof Foxes and some early standard roof cars Ford laid the mouse fur aside for a thin vinyl headliner using Logan grain. Logan vinyl is cheap stuff, and tends to shrink and pull from the cardboard backing. It's especially vulnerable to heat, so hot summers kill it. You can re-glue it, but like mouse fur it will keep falling down. And because the vinyl itself shrinks, it won't fit well even after re-gluing. Some early Foxes use Tier-grain vinyl, which acts similarly.

While spending over $250 on your headliner probably isn't on your Mustang dream list, the job is not hard and you'll really appreciate the results.

Some replacement headliners are simply the fabric, sold without the backing cardboard. These require removing the headliner, pulling off the old fabric (which should be a cinch), buzzing off all the old glue with a wire brush or whatnot, then gluing the new fabric to the original cardboard. This is inexpensive but more work, plus it calls for a little judgment in dealing with glue and fabric.

Other aftermarket headliners are sold complete, attached to their backing, but they're a universal fit to all Fox Mustangs, requiring you to cut out for the domelight and other small parts. These headliners will not work with a factory sunroof.

For this article, we worked with industry leader TMI as we've found its upholstery products to be nicely built from quality materials. Furthermore, TMI gear fits, and is available in a variety of colors and materials. They cater to both pure restoration and restomod clients as well.

TMI has offered mouse-fur headliners for standard-roof Foxes for some time, but using our hatchback as a pattern, the company now offers headliners for factory sunroof cars as well. No one, including TMI, is currently offering the concours-correct Logan vinyl for sunroof Foxes. Instead, they sell fabric (mouse fur) headliners on backings specifically cut and shaped for the sunroof cars. These backings are noticeably different from standard-roof cars, so simply cutting a hole for the sunroof in a standard headliner will not work.

Because Ford should have offered the better-looking, better-insulating mouse-fur headliners in the first place, we decided this upgrade to our hatchback meant more to us than the small, reversible step away from concours correctness the mouse fur/sunroof combination represents. Besides, we're tired of the vinyl hanging around our heads.

Purists may wish to wait awhile as TMI will eventually reproduce the Logan vinyl, but we guess this will take over a year and will cost more, as replicating the Logan vinyl requires purchasing an embossing drum and many yards of embossed vinyl. TMI expects to produce several, but not all of the stock Ford colors in Logan grain.

TMI's fabric, standard-roof Fox headliners carry a suggested retail of $262.98. Pricing was not finalized on the fabric sunroof versions, but it will likely be a few dollars more, but nothing exceptionally different. Color availability centers on the popular shades-the overwhelmingly predominate gray options are all covered, for example-and more colors are being added. TMI also has correctly trimmed headliners for the various standard, T-top, and sunroof configurations, as well as the Foxes' two domelight options.

Also worth considering are the sunvisors. Often these are OK and can be reused. If not, TMI offers matching sunvisors, and some outlets offer headliner and sunvisor specials. Curiously, in our '91 LX hatch, Ford used mouse fur sunvisors and Logan vinyl on the headliner. Our visors were good, so we reused them with the new TMI headliner, so now the two match.

There's little rocket science in fitting a Fox headliner. The domelight and sunvisors are removed, the plastic trim pieces around the edges-windshield, doors, backlight-are popped off, and the headliner is removed. Because the sunroof is a single, mildly rigid piece, it goes in and out in one big step, and there are no bows or loose fabric to fiddle with.

The one-piece headliner is also self-centering, so fitting the new one pretty much means getting it into position and tying down the edges. On standard-roof cars this is little more than re-fitting the side trim, sunvisors, and domelight; on sunroof cars, excess fabric is supplied around the sunroof opening. This is lightly pulled into position, glued, and trimmed. There is no need to remove the windshield or backlight.

There are more installation tips in the photos and captions, but we'll close with a note about just how transformational a good headliner turns out to be. Getting it back up where it belongs and looking good makes a tremendous difference.

Horse Sense: TMI also offers upholstery and other interior parts for classis and modern Mustangs. Check them out if you want something special for your upholstery project. 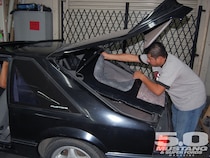 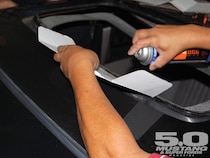 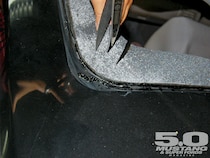 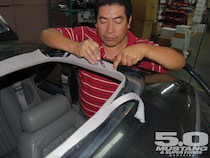