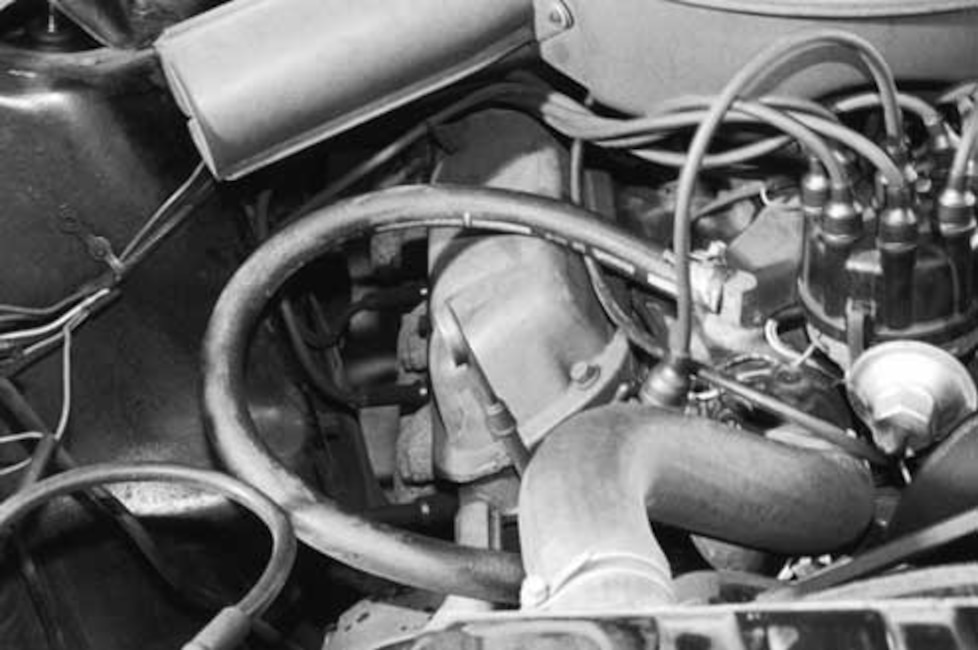 The looped hose means a bad heater core. The heater core in this 1966 GT provided 14 years of good service--until the other day. 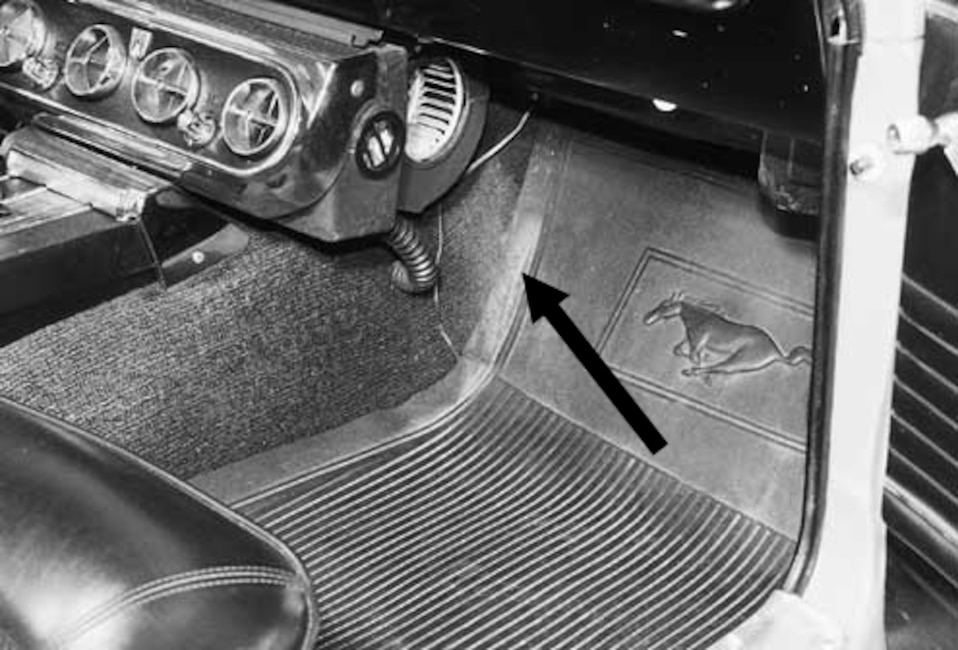 Evidence of the leak is visible in the area behind the air conditioner (arrow). We recommend you pull the carpet out--or at least up--so the floorpan and underlayment will have a chance to dry. These types of failures are a good argument for the tar-type underlayment. 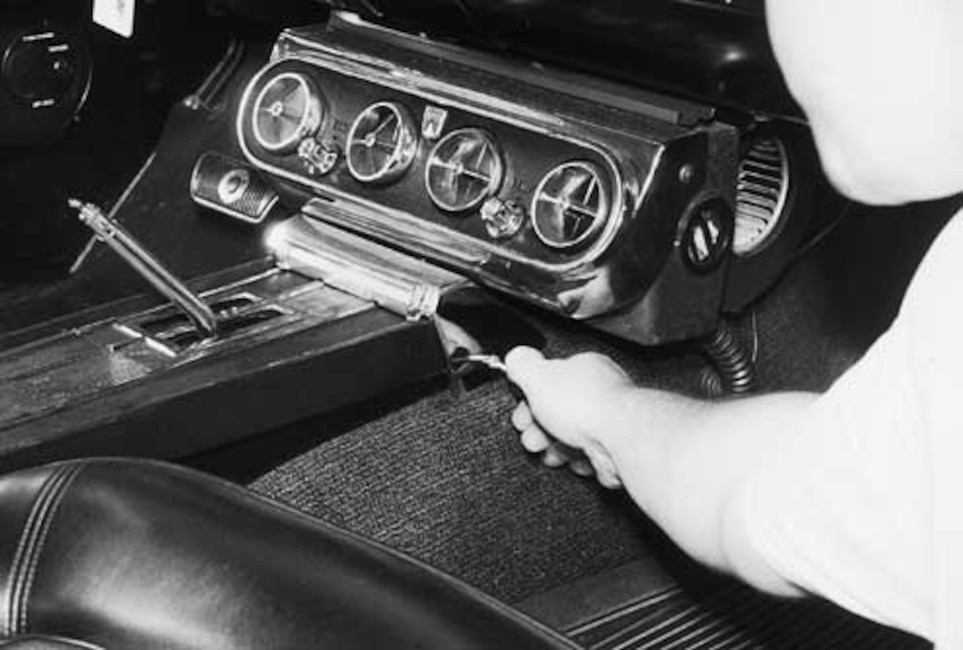 We drained the radiator of coolant, then moved inside to remove the console. Six screws hold the console in, and they can be reached without removing the seat. Next, we removed the shifter handle using a hex-head Allen wrench. 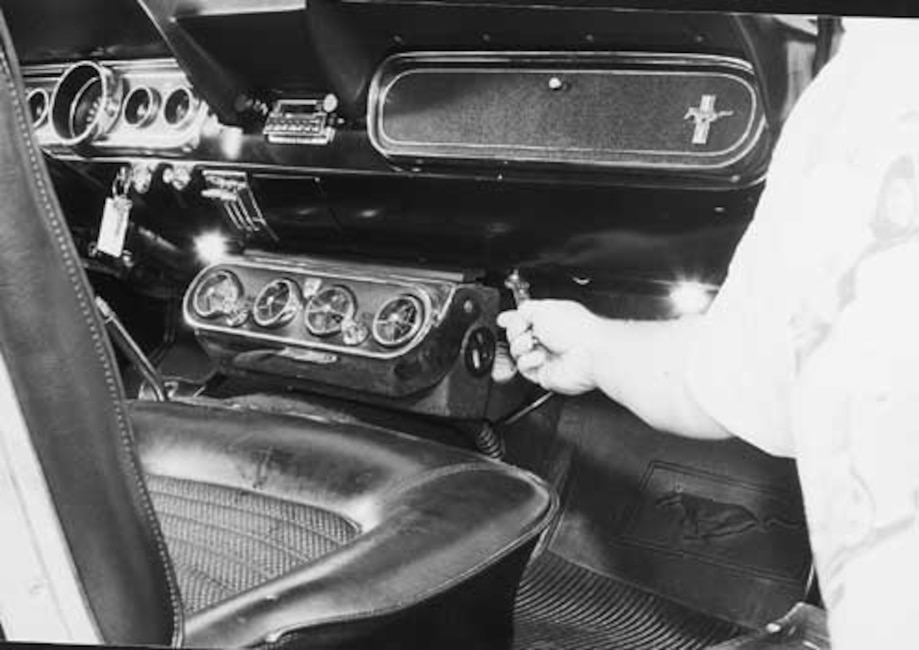 If your pony has underdash air like this one, you will need to pull it out of the way for easier access to the heater box. The 1966 has two bolts--one per side. 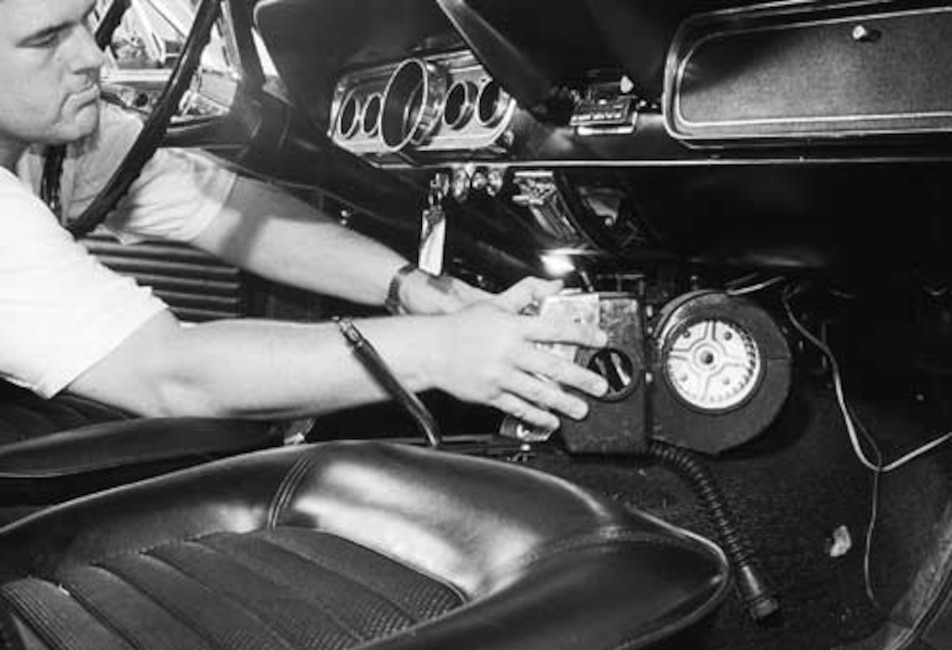 We gently pulled the air conditioner box over to the driver side. We were careful not to kink any of the hoses because this could lead to Freon leaks. 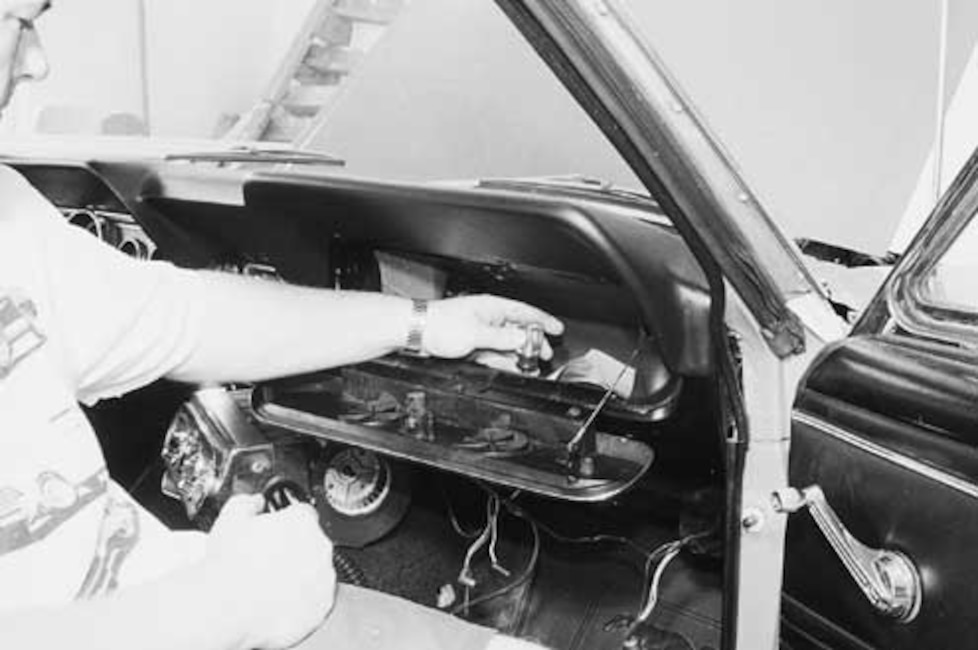 We removed the glovebox, glovebox door, and heater element wires from the face of the heater box. The glovebox seemed as though it wouldn’t fit in the space between the dashpanel and the heater box. So, we squeezed the box flat at the opening, and this aided in getting it out of the space provided. 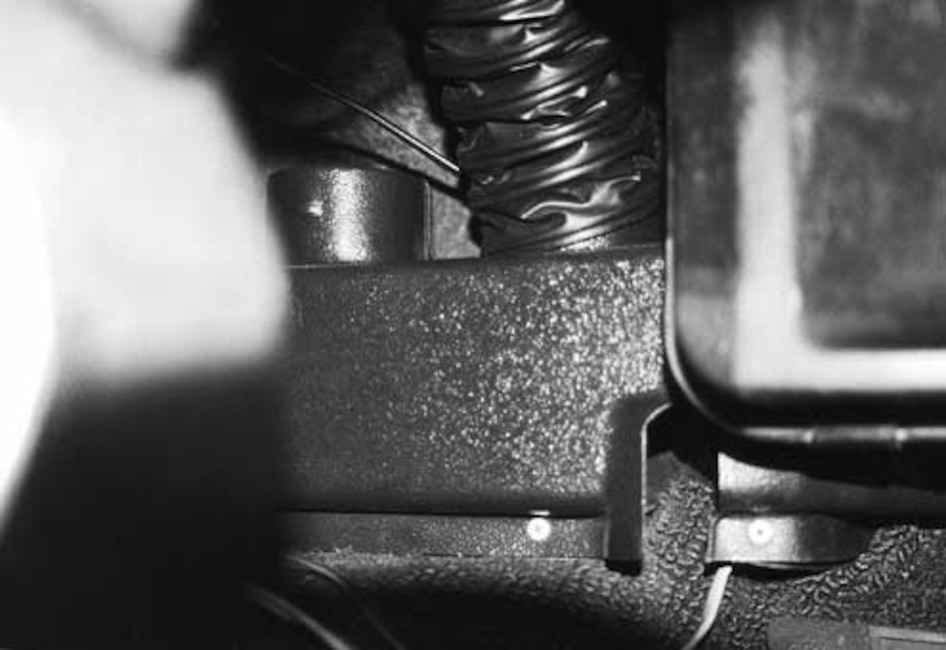 At some point in the GT’s life, the defroster plenum was replaced with the black plastic box seen here. We pulled this out of the way, but left it connected to the control cables. 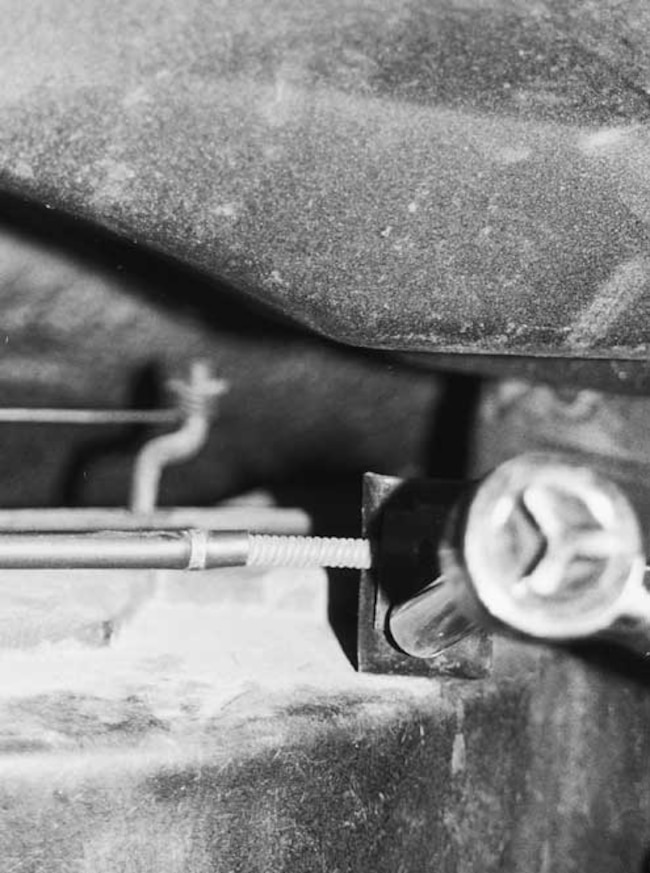 With the glovebox and glovebox door removed, we accessed the two heater control cables that were mounted on top of the box. 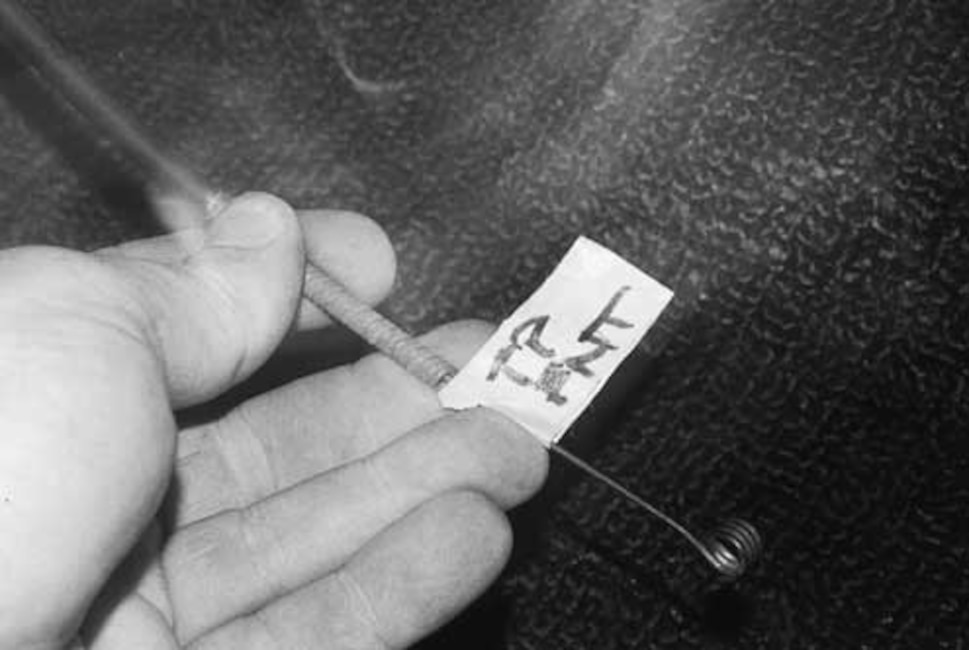 We marked the two upper heater cable locations with tape. They are almost impossible to get confused, but we always believe it’s better to be safe than sorry. We marked ours "top front" and "top rear." 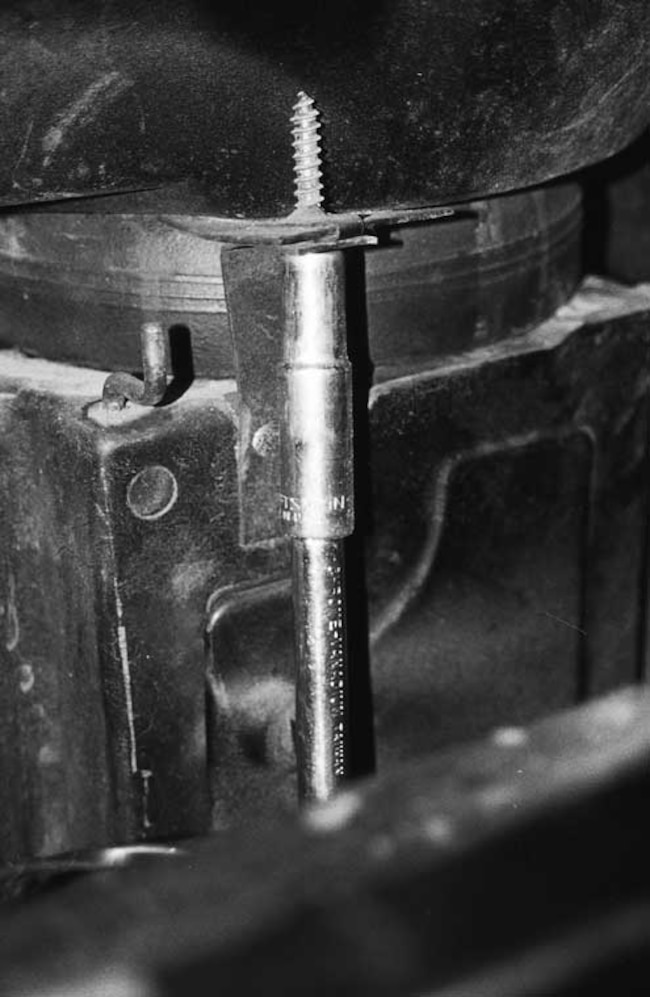 We removed the retaining bolt that keeps the fresh-air inlet snug to the cowl, and we were able to see the bolt with the glovebox removed. 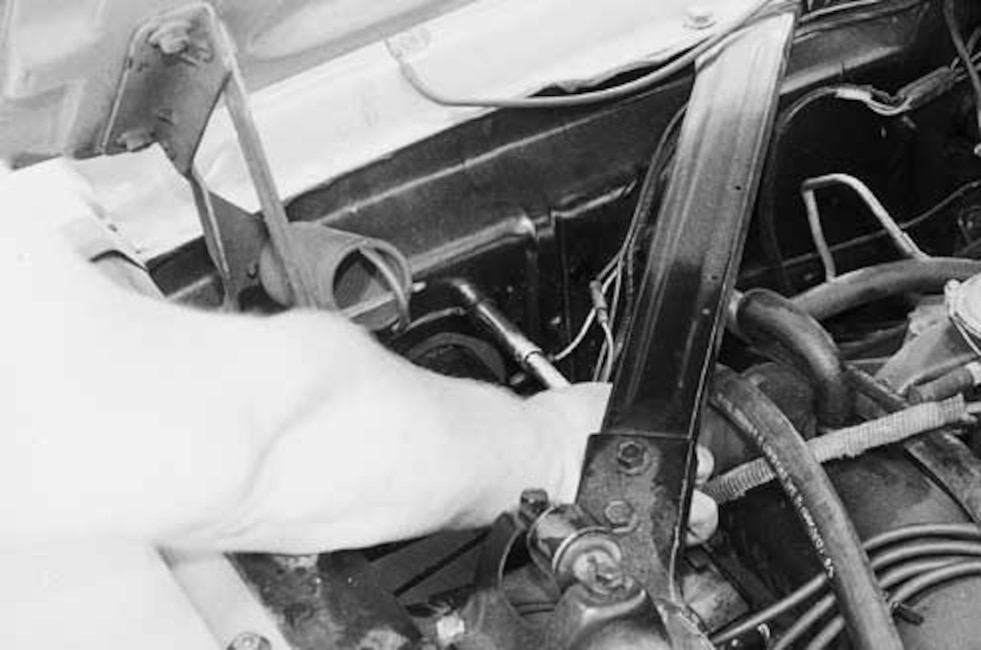 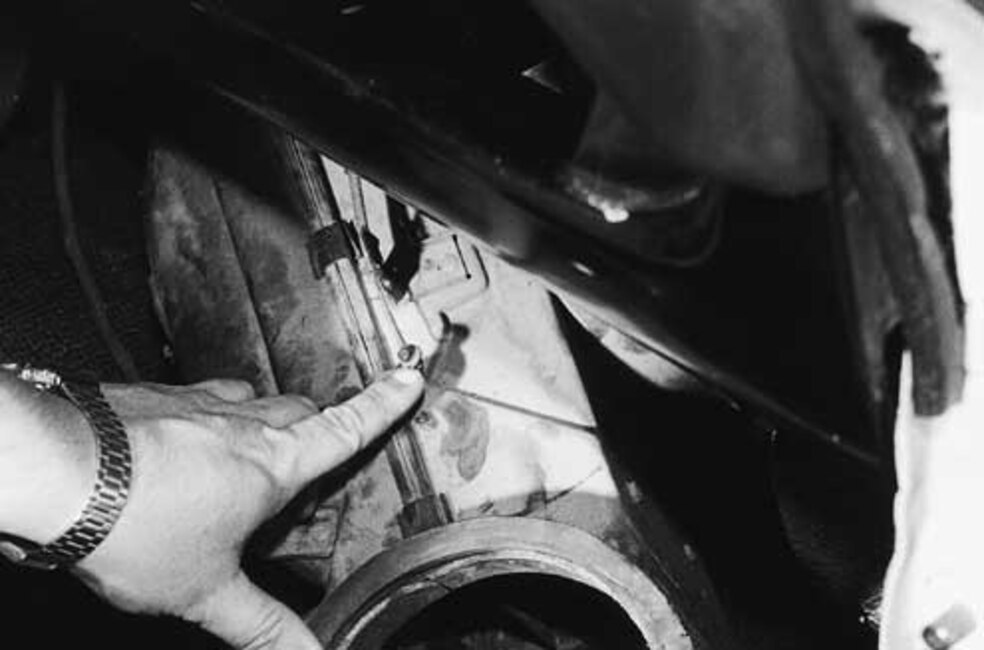 A cap nut keeps the cable on the rod. Cap nuts can be difficult to access while still mounted behind the dash, so we pulled our dusty heater box down to get to the cap nuts better. 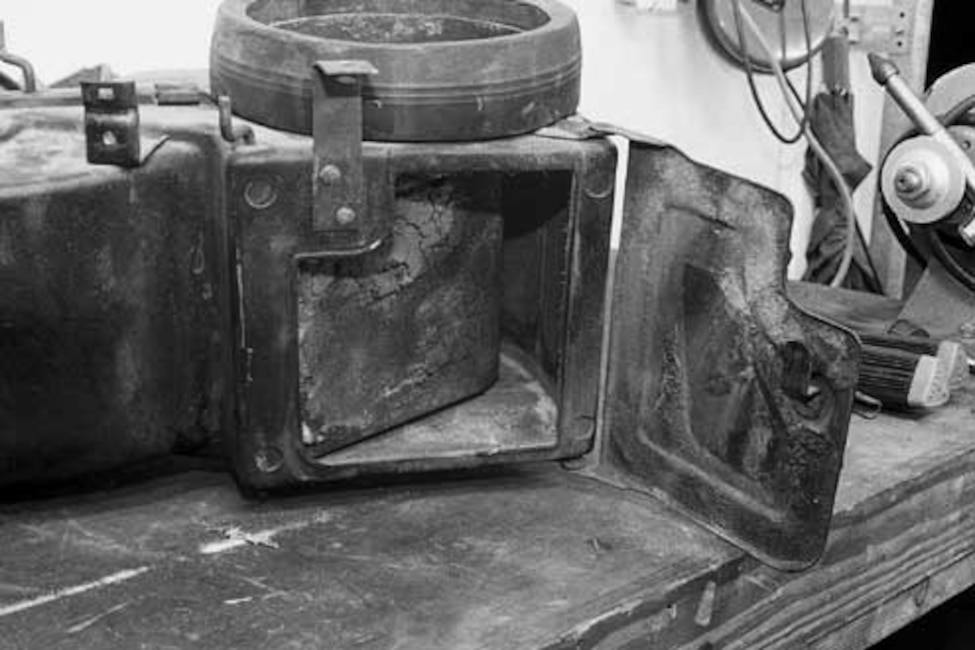 The seals on this plenum appear to be gone. This makes for a drafty box that will allow hot air to bypass the plenum doors and enter the driver compartment. 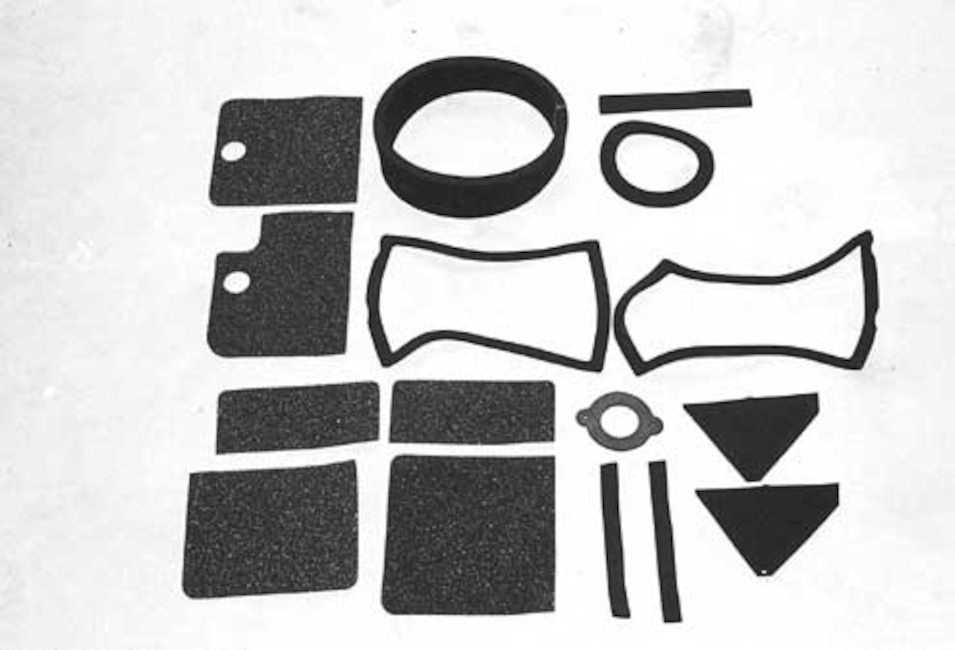 Purely Pony sent us this complete seal kit. This kit can handle any 1964-1/2 to 1968 Mustang built without in-dash air. 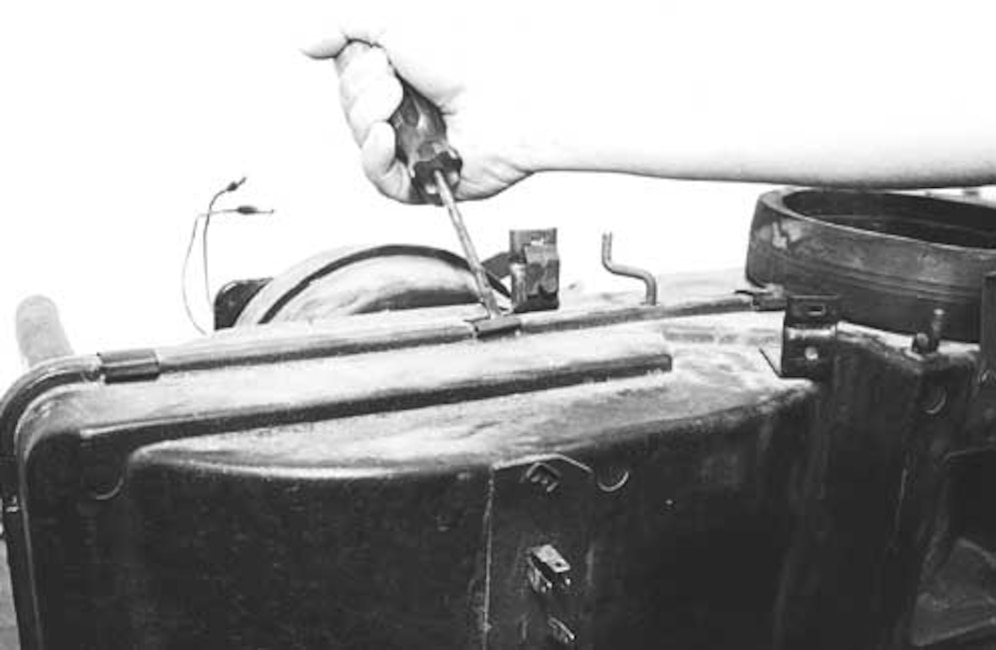 When replacing the seals in the heater box, we first removed the case clips with a flat-blade screwdriver, as shown. Do this carefully because the case can be quite brittle, and you could snap the retaining lip off the box. External snap-ring pliers work even better. 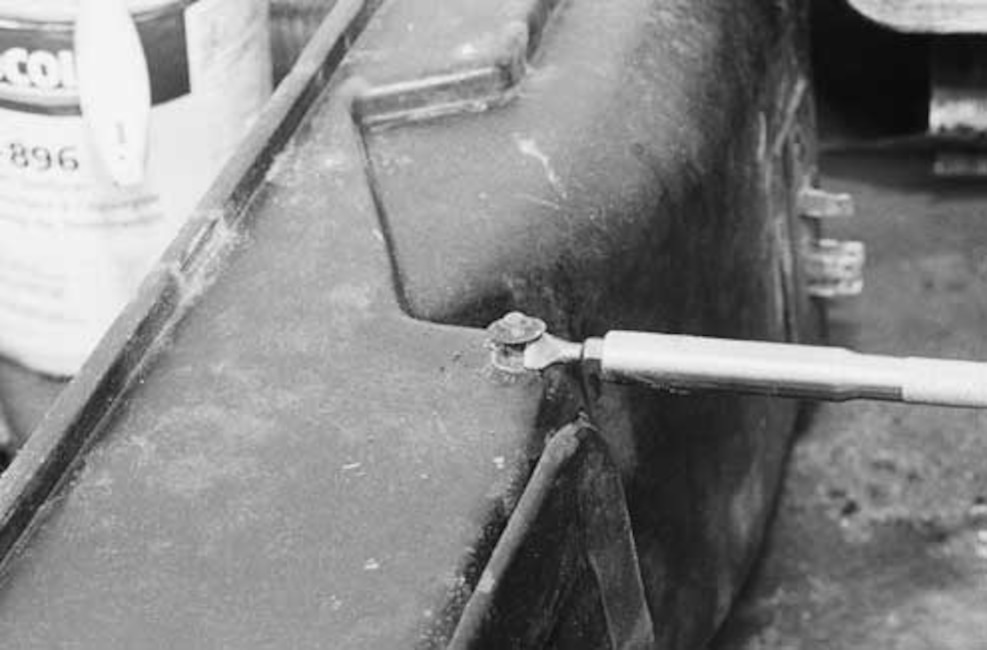 We cleaned all the metal parts of rust and the old seals of debris. You will need to remove the star washer from the bottom of the case to get the fresh-air door out of the old box. We used a bead blaster to clean the pieces, but a wire wheel works just as well. 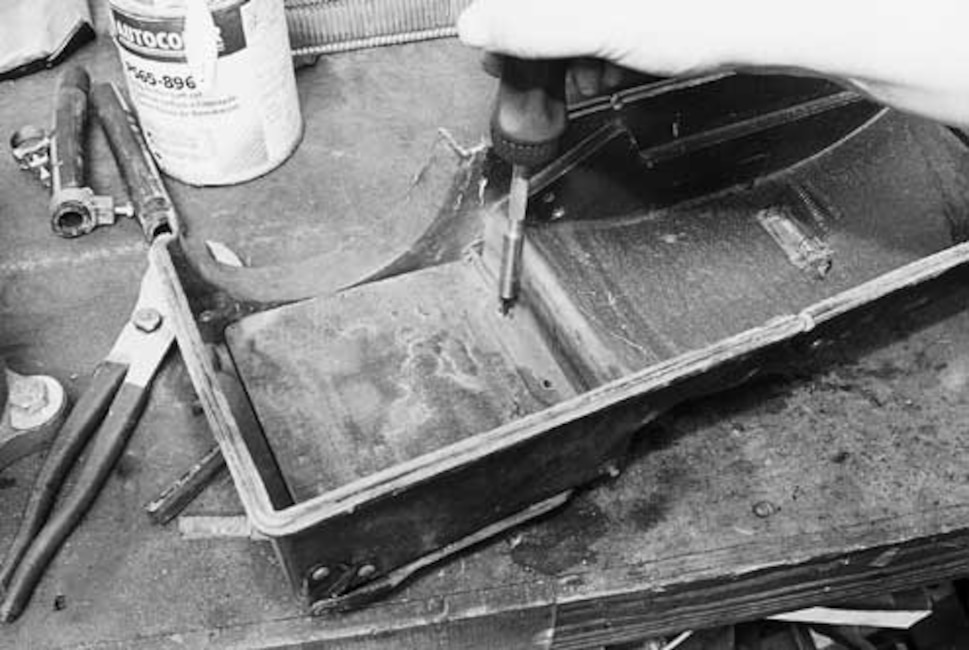 We used pliers to remove the tower hose clamps from the old heater core. However, a thin, flat-blade screwdriver can be used to get under the banding and open up the clamp. 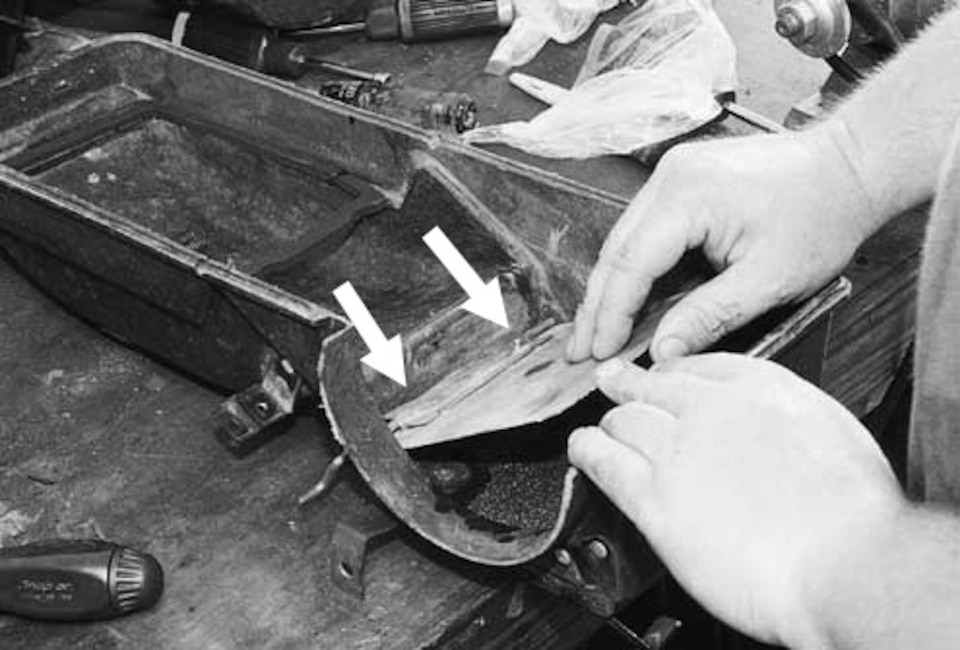 The vent door has two screws (arrows) that pinch a retainer to the door. We carefully bent the tabs up that retain the plate and removed it and the door for cleaning. 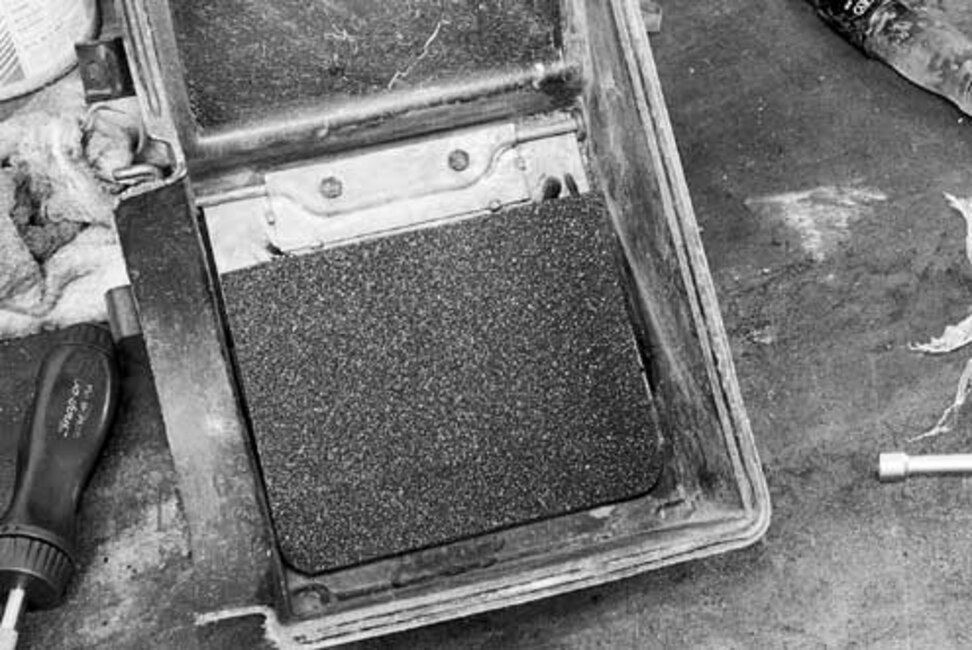 After a thorough cleaning of both the case and the doors, we used MP-7 to prevent rust from ruining all our cleaning efforts. At this point, we began the reassembly. We tapped the retainer for the fresh-air door flat to allow it to slip over the rod. Then we applied the foam to the heater parts using a good quality trim adhesive such as 3M 80080 or 80013. Since the case is black, we used 80080 because the color is the same as the case. 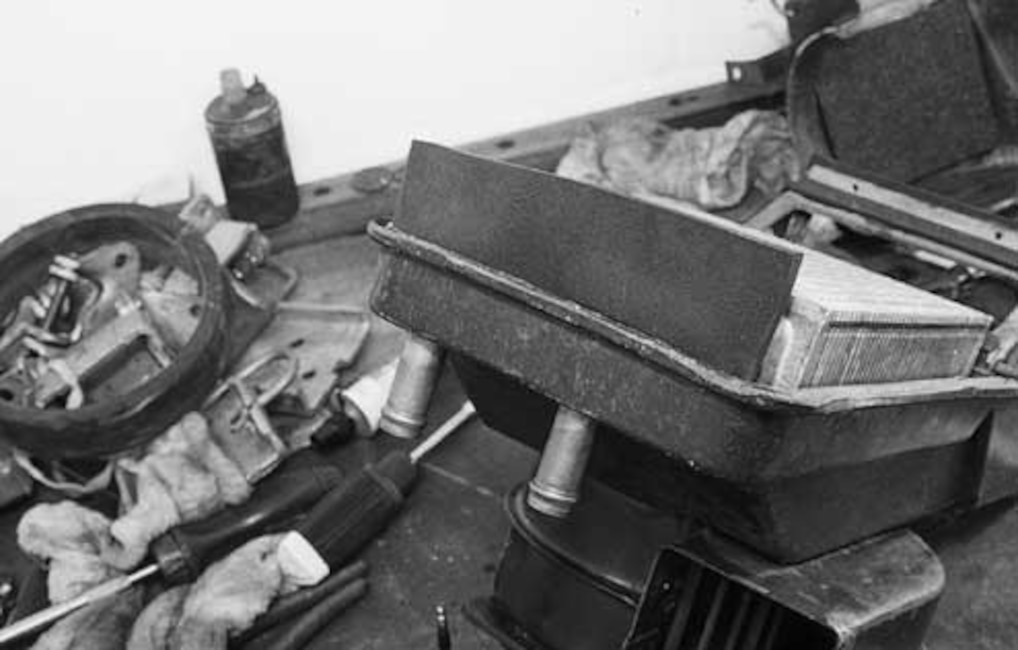 The heater core seemed to have a little too much freedom of movement. So, we used a section of dense foam on the side that butts up to the outer edge of the case to corral it better. Although this is not necessary, it made us feel better. Next, we installed the heater hoses and made sure they pulled the core tight to the case seals. 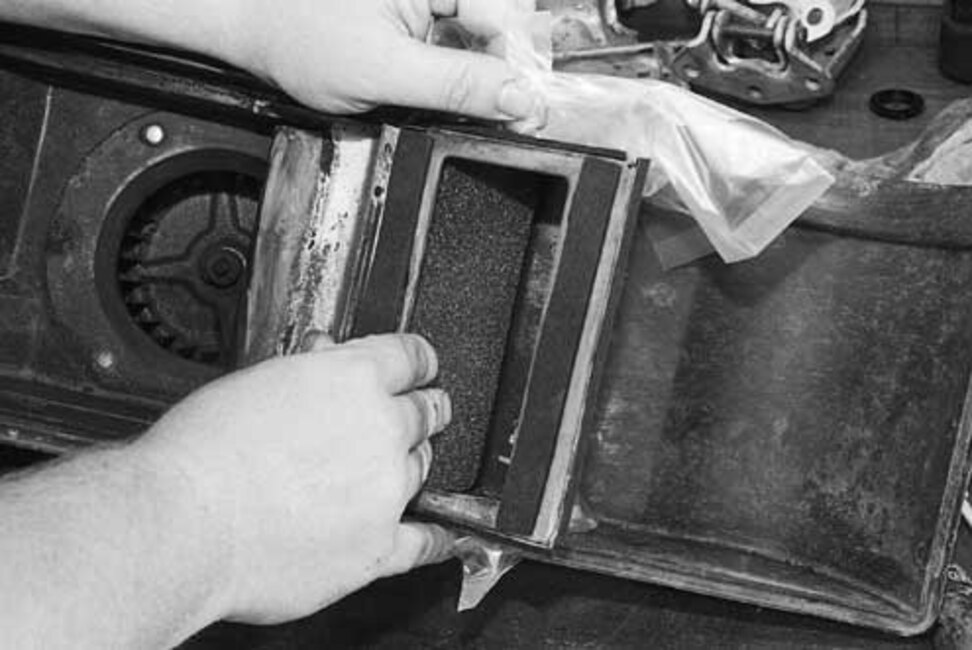 The foam that goes on the outside of the blend plenum can be a real pain to install without wrecking the foam itself. So, we used some plastic sandwich bags to make the installation easier. After the part was in and tight, we just pulled out the bags. 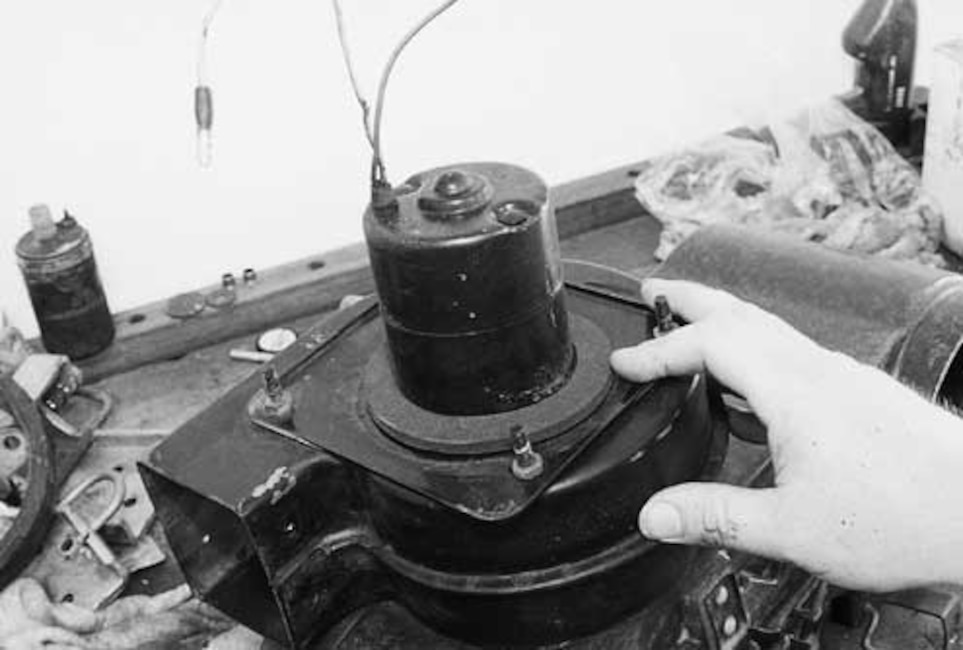 After we resealed the inside and clipped the case back together, we put a new seal on the blower motor. This is a very important part because it helps keep engine fumes out of the driver compartment. 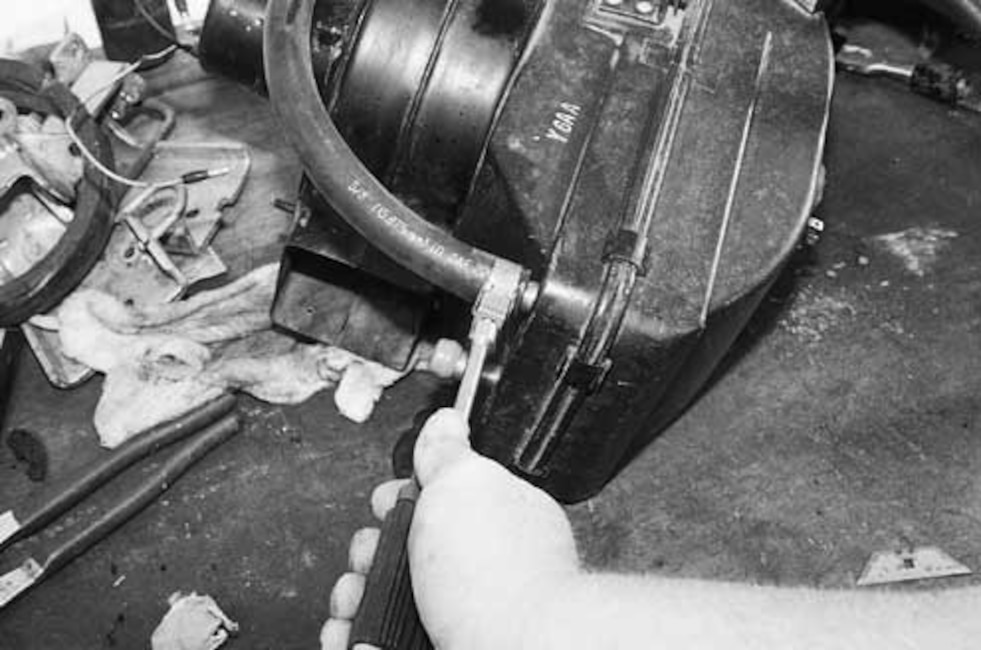 We went crazy and snagged 10 feet of heater hose for the car. We were happy to know that the local parts store carried it in black. In a stock engine bay, nothing looks more out of place than red heater hose. 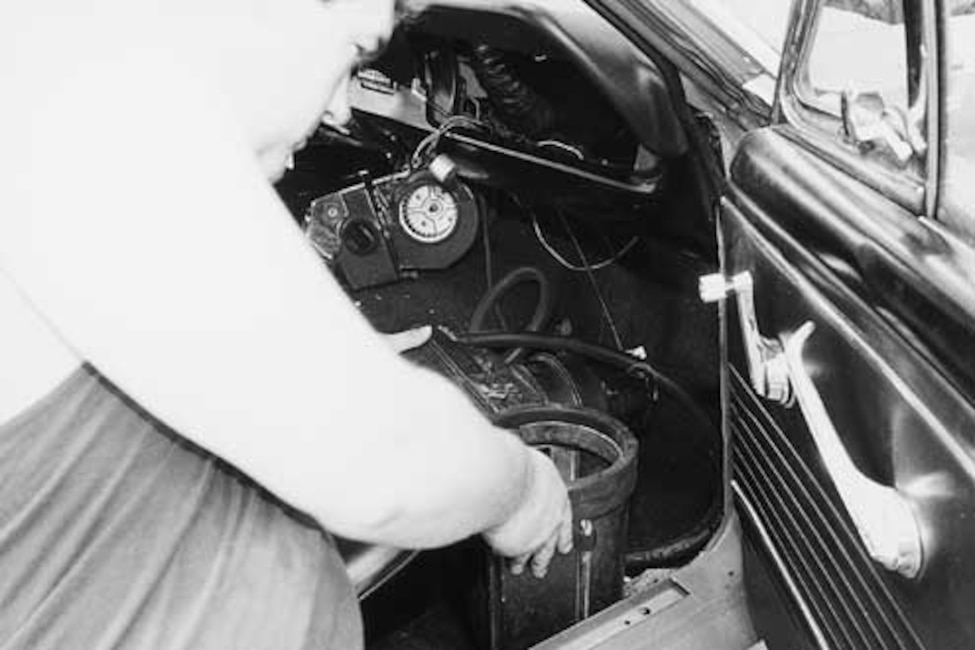 We put the hose ends through the firewall--you’ll have to go to the engine-bay side and pull them away from the engine--and set the case on the floorboard. Next, we lifted the case into an approximate position. 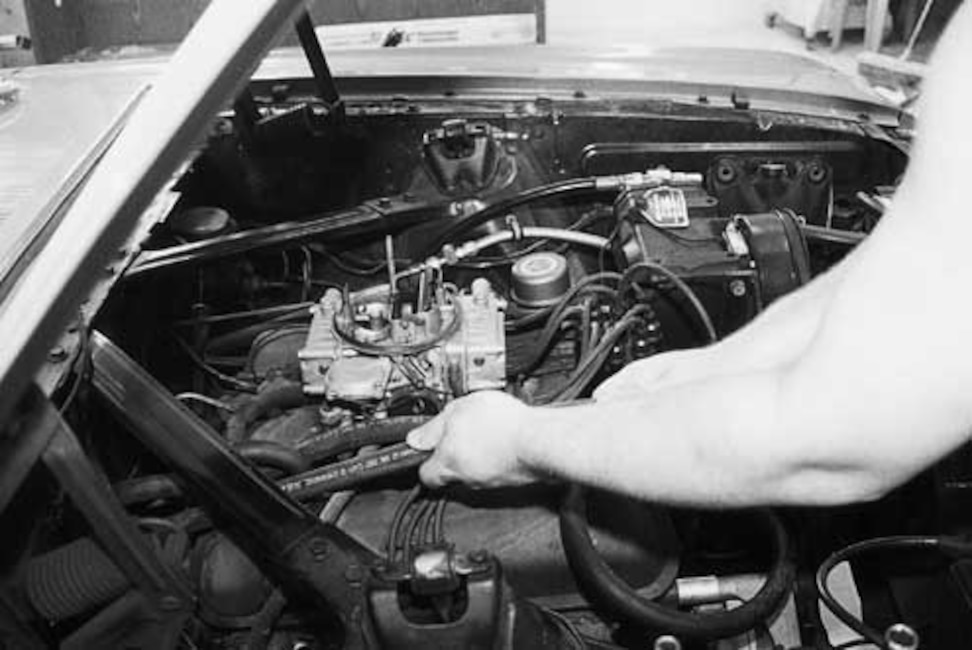 We finagled the case so the blower motor was in the hole. Then, we carefully pulled the hoses out of the firewall. We went back and forth to get the box to mount correctly. You must be patient and work with care to make sure nothing gets pinched or comes up missing, like the blower motor wiring. A helper at this stage would be nice. 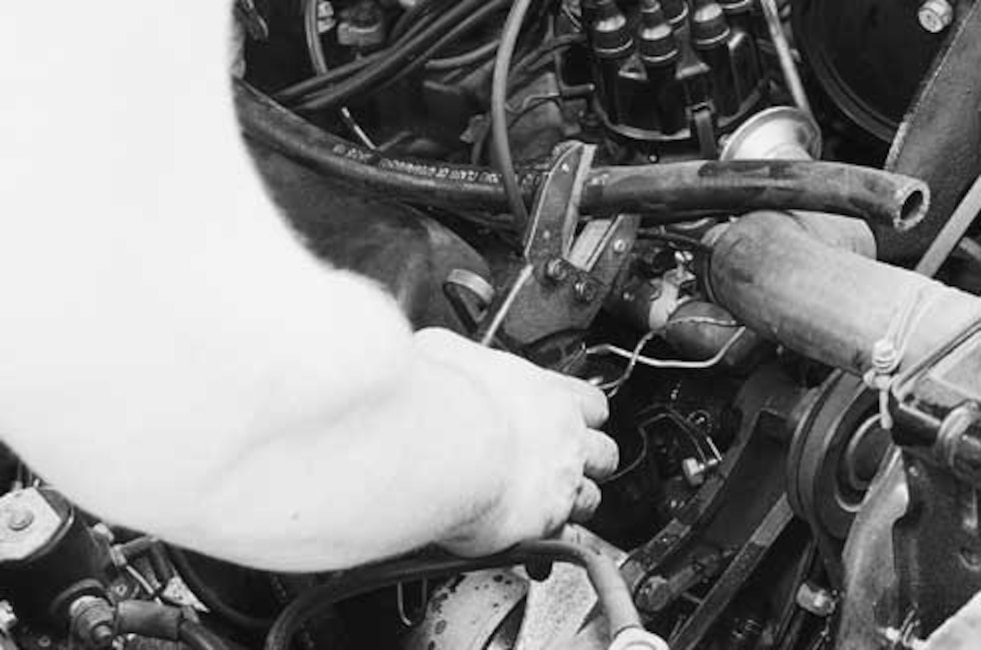 Next, we plumbed the hoses over the valve covers to their correct positions. We really liked the Handi-cut(TM) from Craftsman for clean, straight whacking of heater hose. 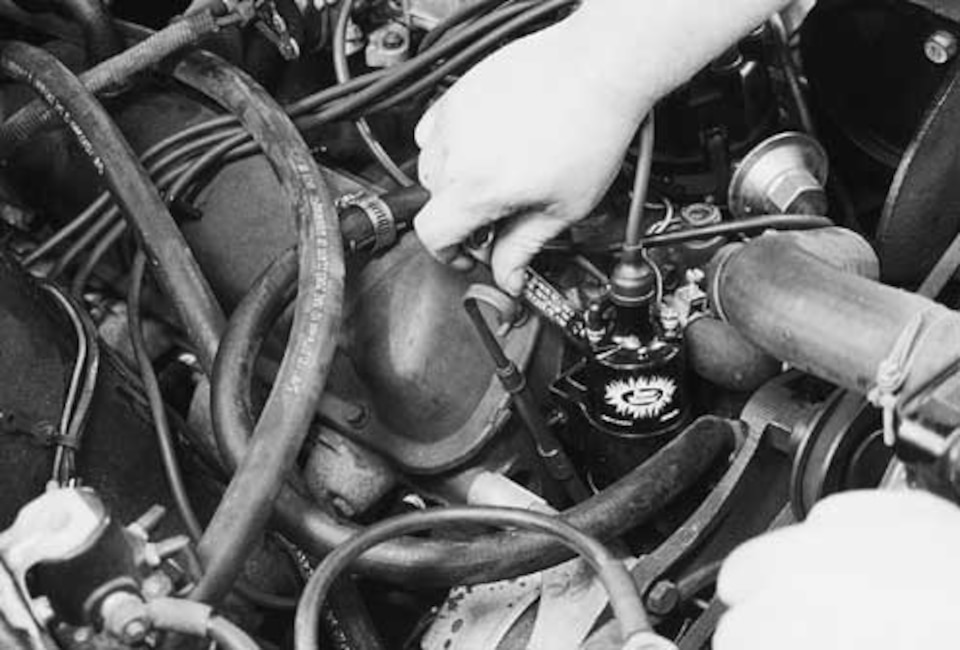 Before we added coolant, we attached the fenderwell-side heater hose to the water pump, then we poured water in the driver-side hose to fill the core. Next, we buttoned up the system and tested it for leaks. The only leak we found was the water pump itself. Sigh... a Mustanger’s work is never done.

Dribbling water and wet carpet make for grouchy Mustang owners. Heater core replacement is enough to make you groan, especially in the post-1966 cars with air conditioning. Even with proper maintenance and care, some heater cores are destined to failure. This was the case with the core of this 1966 GT hardtop.

Without warning--as is usually the case--it just ruptured in a parking lot. So with a pocketknife and flat-blade screwdriver in hand, the owner did the Mustang loop with the heater hose. Then, he filled the radiator with water and limped his injured pony home. This is where we came into the picture.

The gluttons that we are, we decided you need to get a peek at how to replace the heater core and the foam kit on a vintage, nonair- conditioned Mustang. For the heater core, we went to the local parts store and snagged one off the shelf. As for the seal kit, we went to Purely Pony in Tampa, Florida.

So, put on your work clothes and dig in. There's a heater core to remove, and it isn't coming out without a struggle.