Legroom and Headroom For Taller Drivers 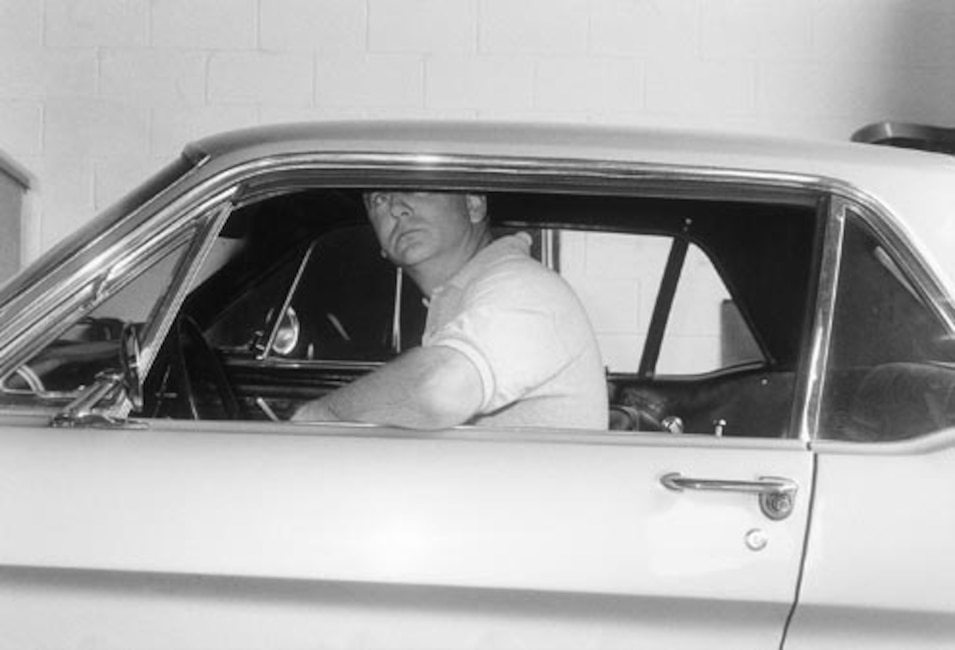 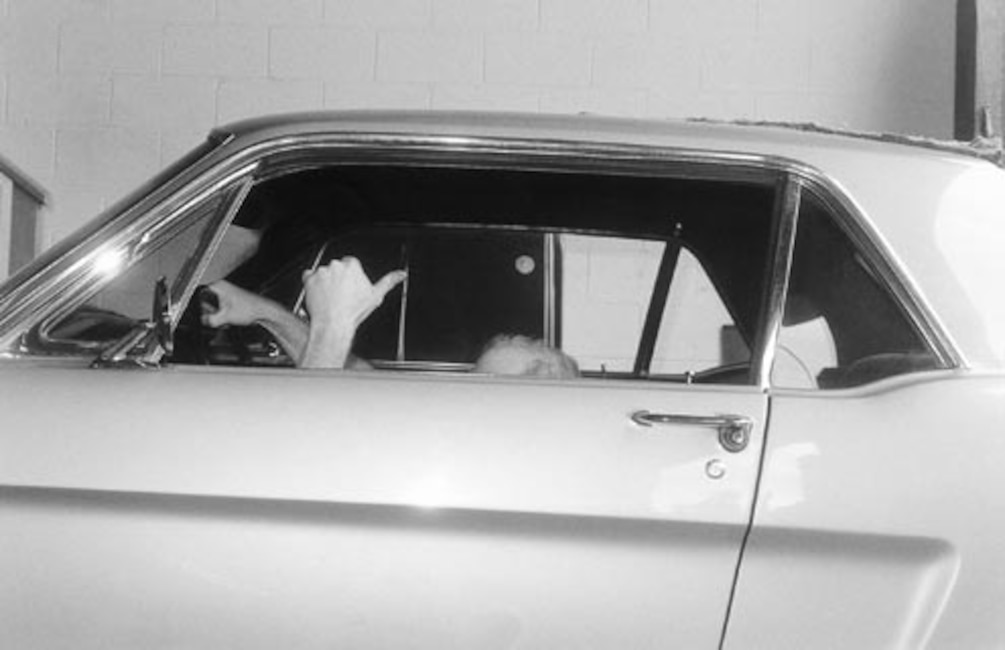 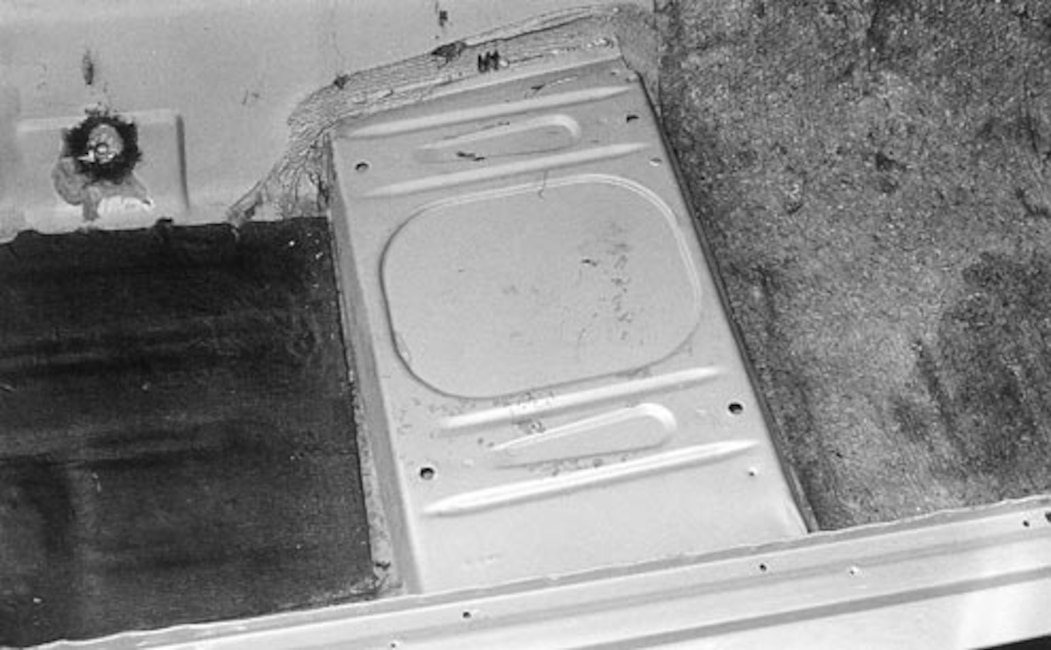 Classic Mustang seat pans are simple in scope. Each is a separate stamping that is spot-welded to the main floorpan as shown. The seat pan is not only for the seat but also for floorpan stiffening and support. 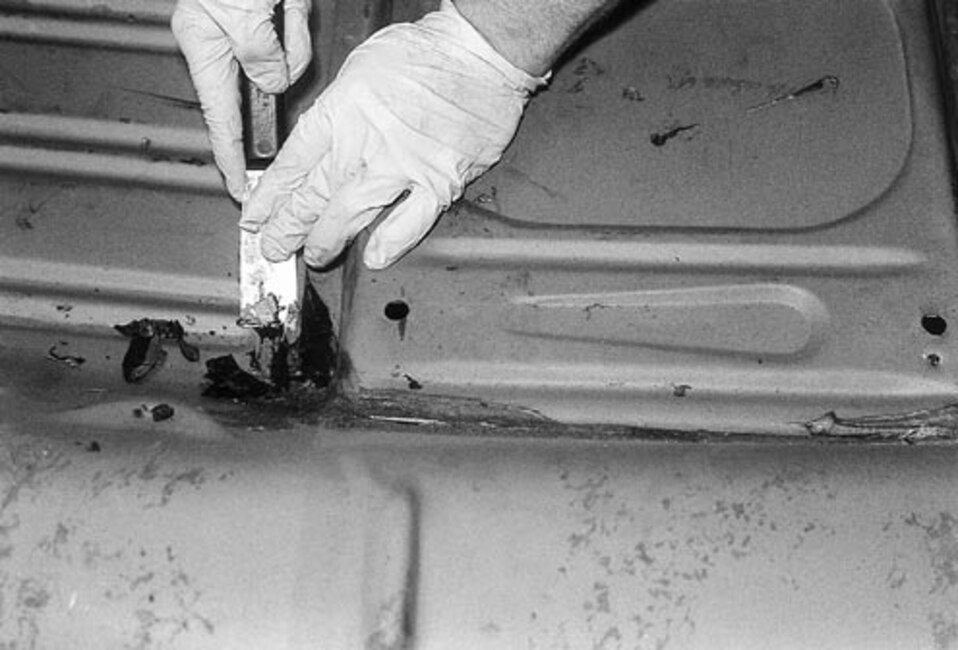 First, remove the petroleum-based factory seam sealer at the seams as shown. A putty knife and lacquer thinner works well for this purpose. 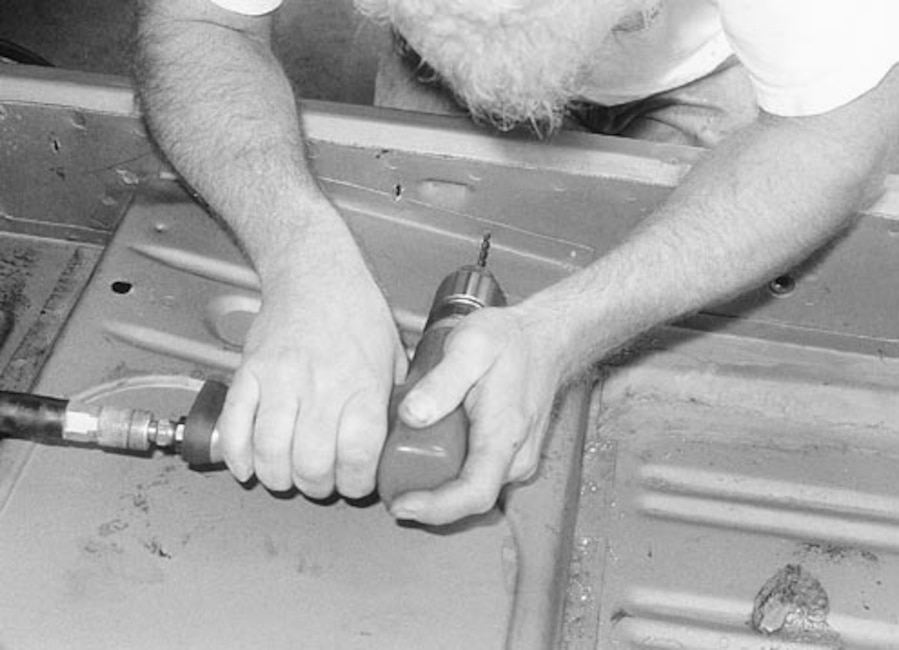 Jerry Choate tells us he has used spot-weld cutters to cut through factory spot welds; however, cutting tips are expensive, brittle, and tend to break. Jerry suggests using a 1/4-inch drill bit first, drilling down through the first layer of steel as a pilot hole. Do not drill through the second layer. 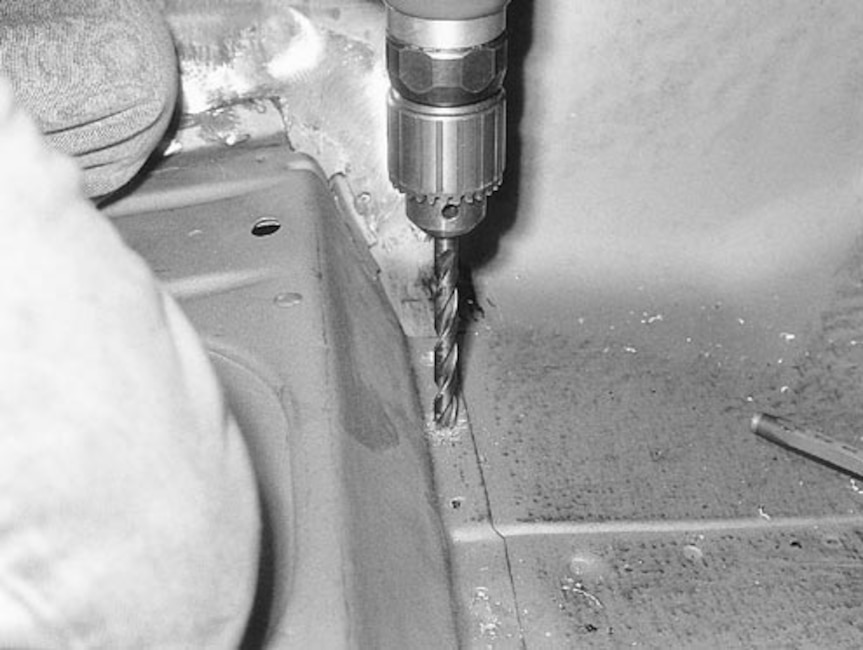 Next, take a 1/2-inch bit and drill down through the first layer only. This weakens the spot weld. 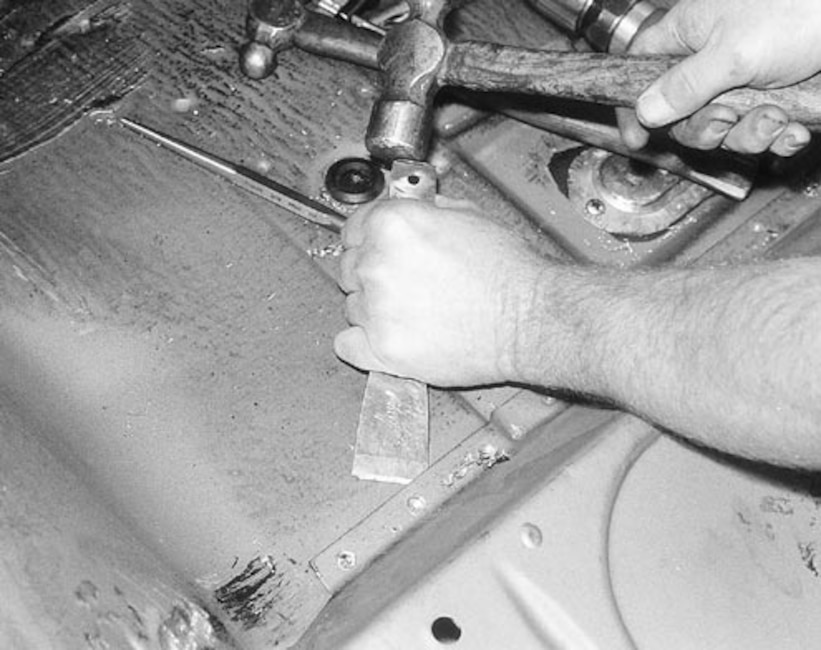 Using a chisel, separate the seat pan from the floorpan as shown. 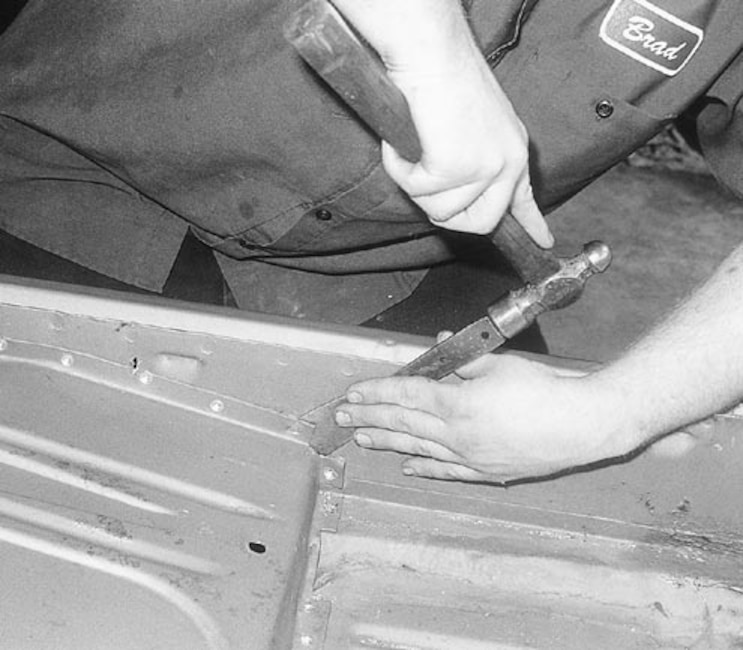 If the pan won’t separate, drill at the spot weld, work the edges, then hammer again. 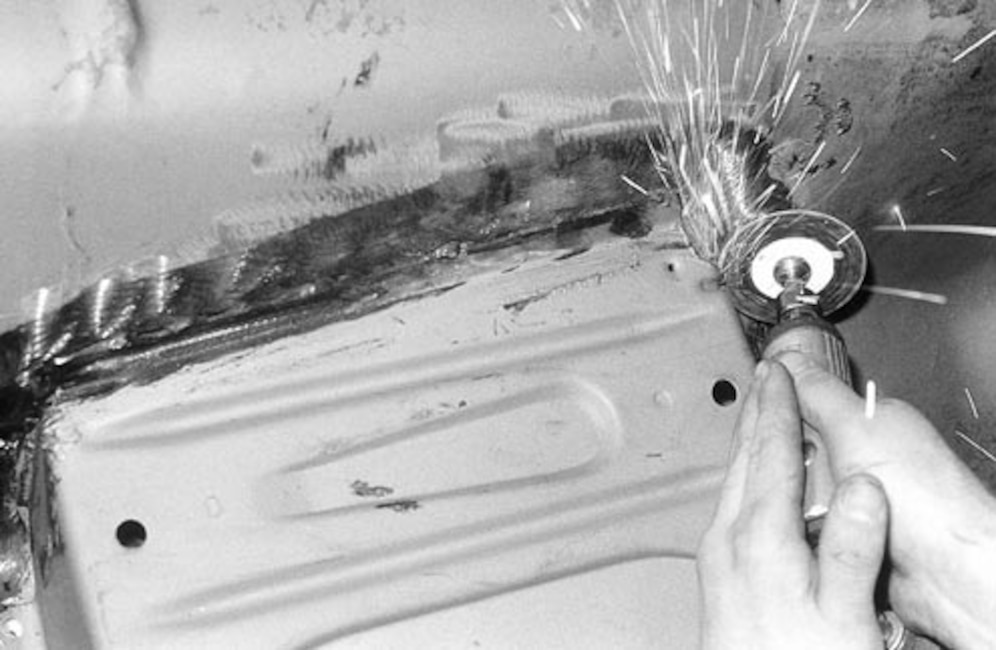 The seat pan is stick-welded along the drive- line tunnel. Cut the stick weld as shown with a grinder to separate the seat pan from the tunnel. Eliminate the stubborn spots with a chisel. 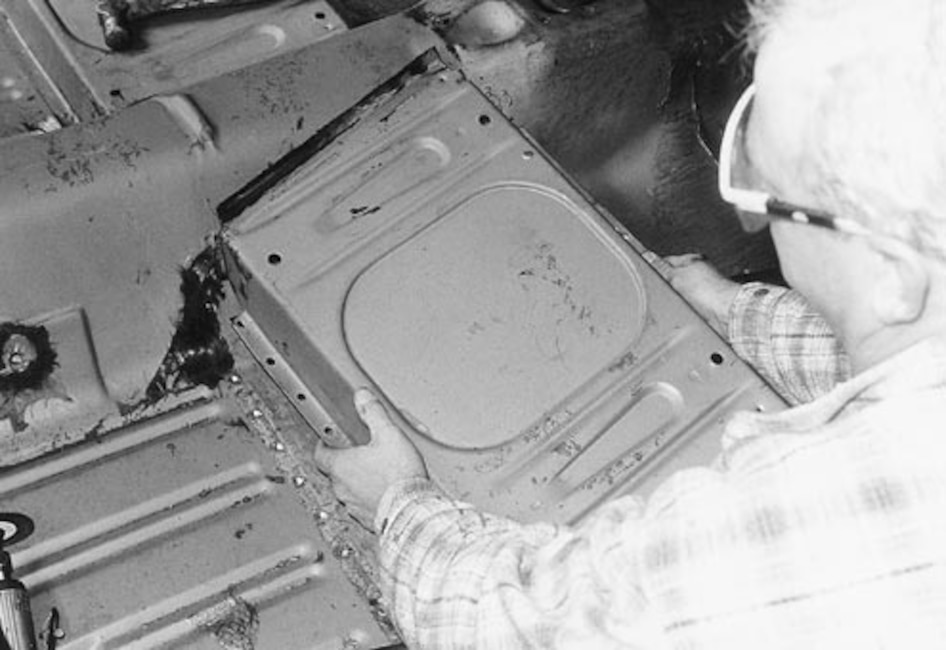 Lift the pan out and get to work. 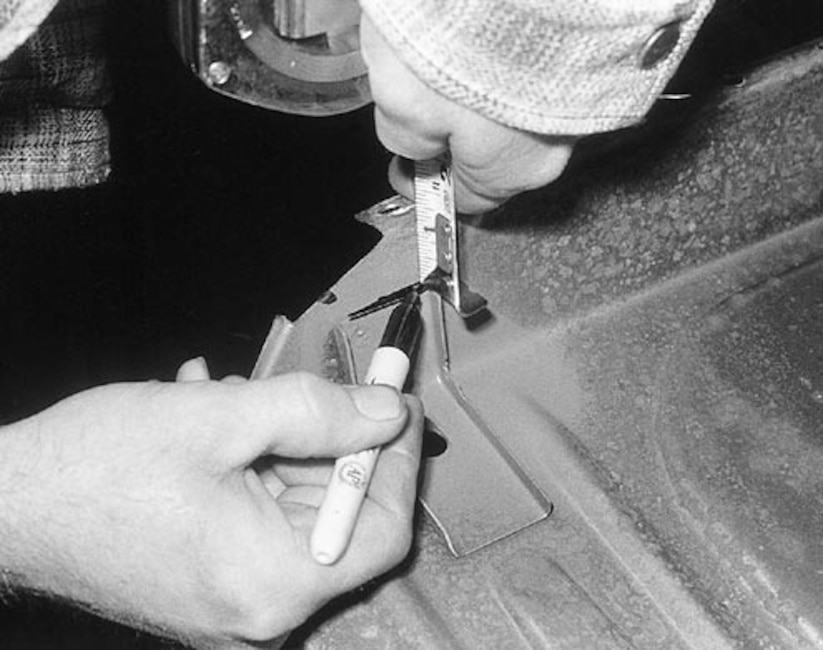 The folks at West Coast Classic Mustang measure the pan up 1 inch from the stock lip as shown, then mark the pan. 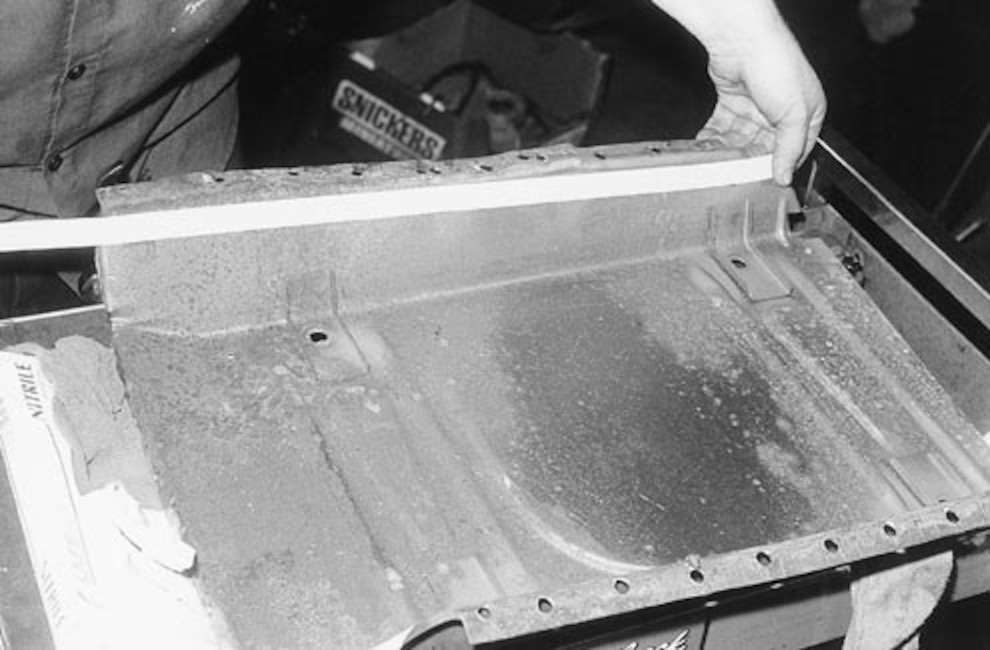 Once the pan is marked, we run masking tape along a 1-inch line above the lip, where we will cut the pan. A good rule is to keep your cut below the seat attachment points. These attachment points offer needed strength. Do not cut these reinforcements because this will weaken the pan. 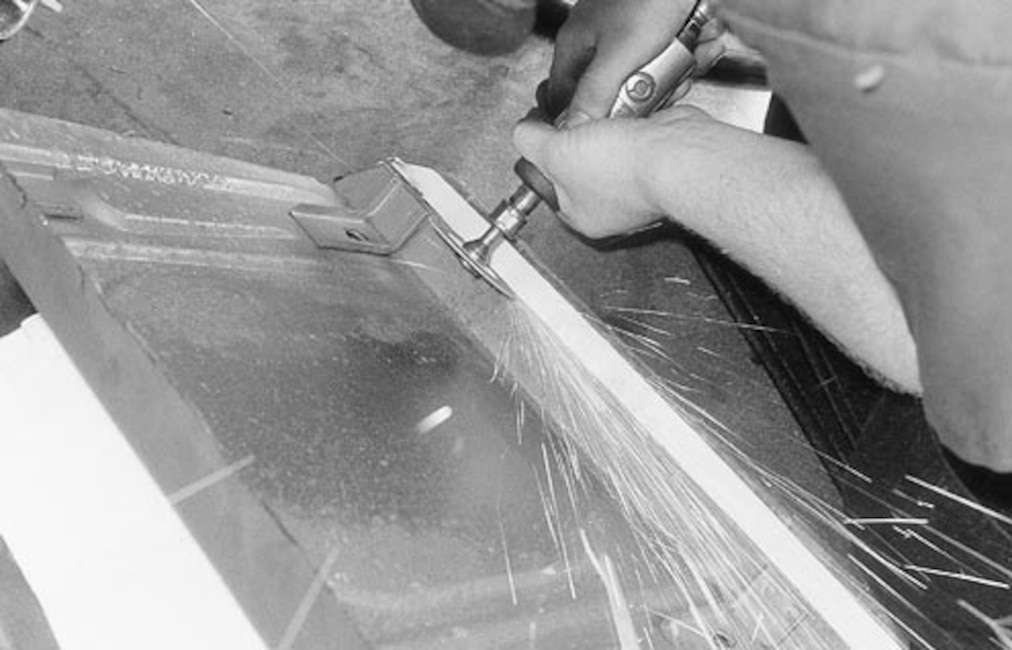 A die grinder buzzes through the pan, which will leave a clean edge. You can either bend in a new lip here with a sheetmetal brake or follow the approach you’re about to see used by West Coast Classic Mustang. 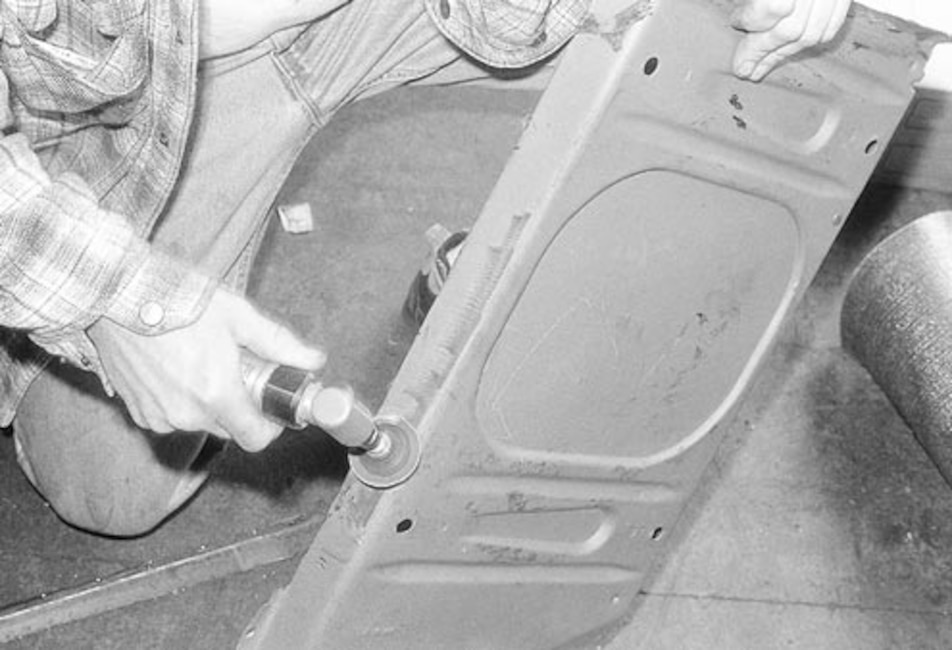 Clean up the sharp edges with a grinder as shown. Watch your hands! 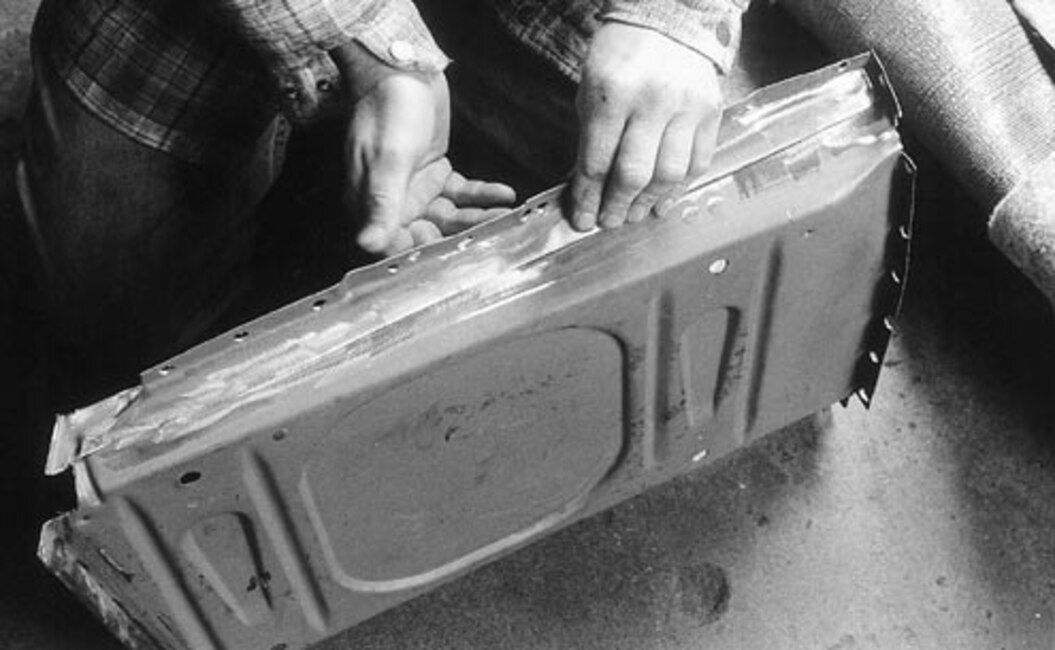 West Coast Classic Mustang takes the lip that has been removed and relocates it as shown. 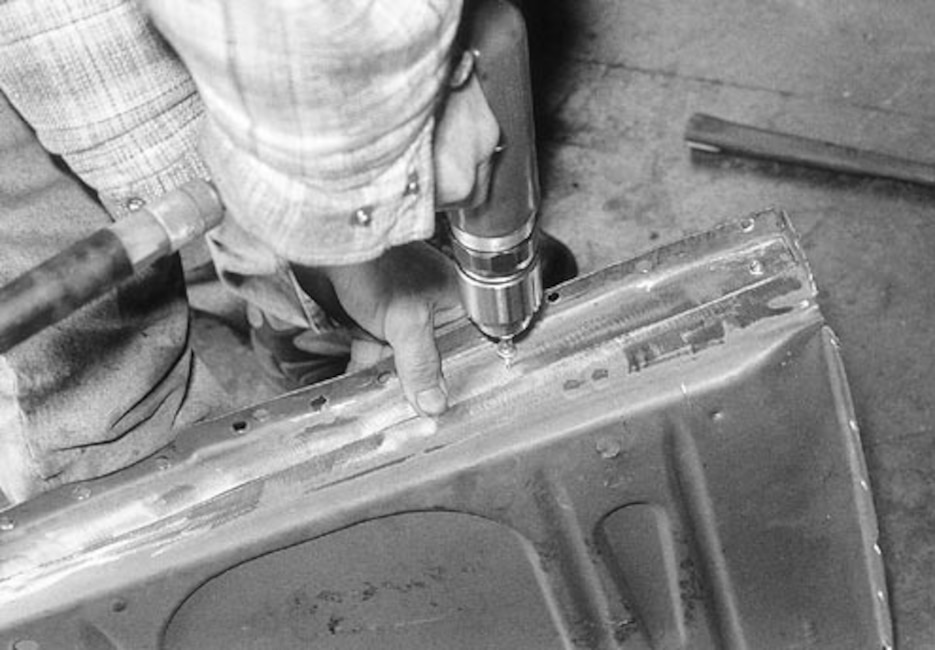 Choate uses self-tapping screws to temporarily secure the relocated lip before welding. Both lips are handled this way. 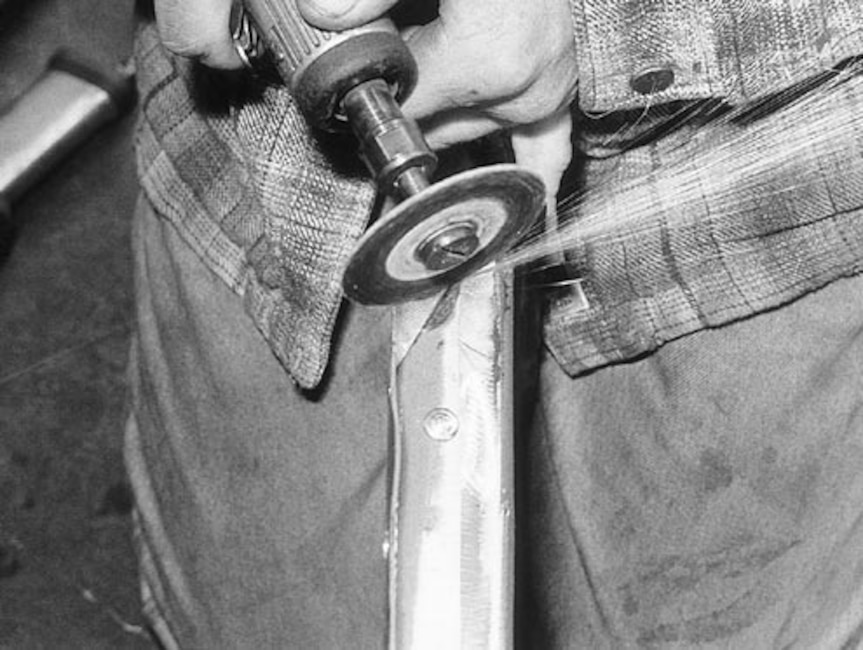 Choate fit-checks the modified seat pan. Some areas, including the inside attachment point, must be trimmed. 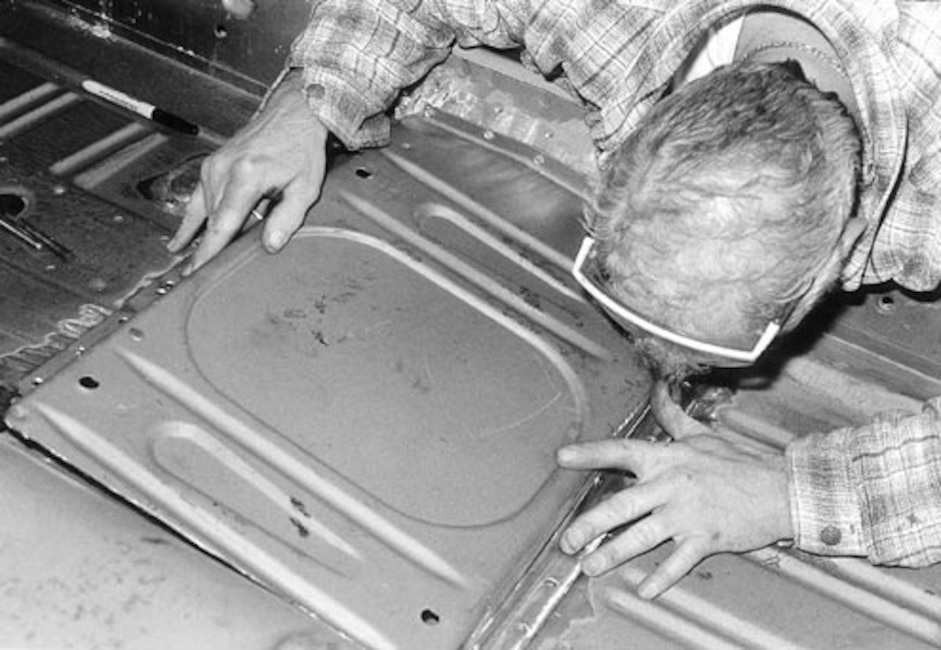 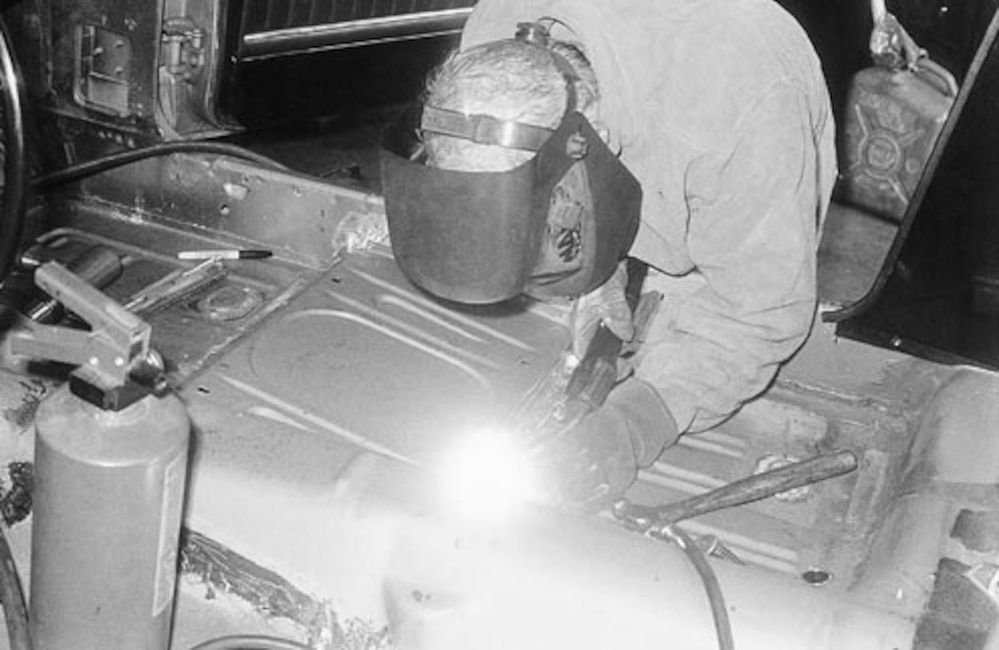 Choate begins the installation with a series of tack-welds, then he checks the fit again. 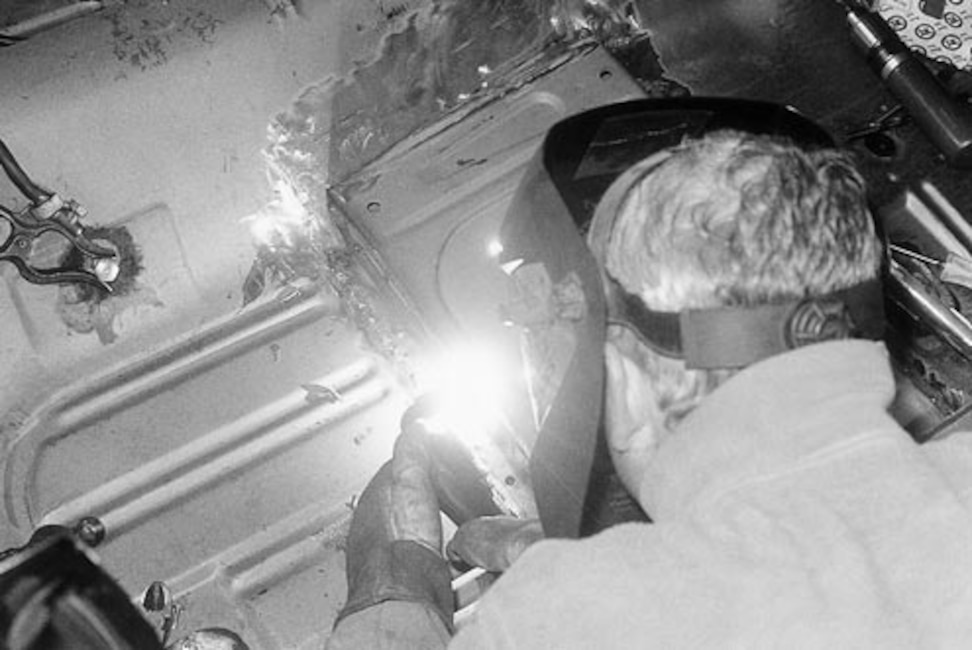 The seat pan is welded at the spot welds and along the new seams. 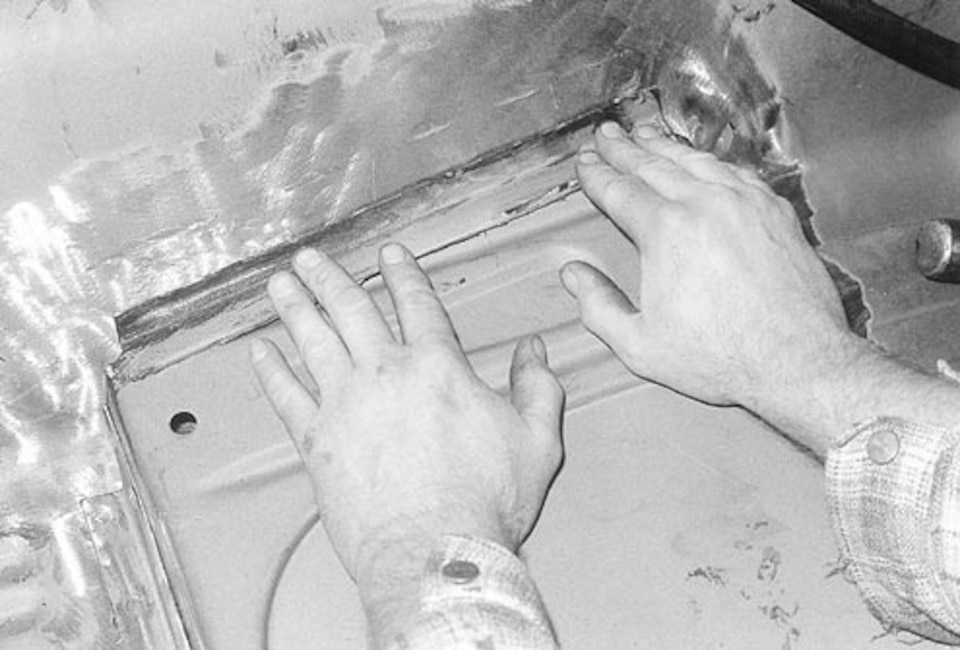 Now that the seat pan is installed, it’s time for brush-on seam sealer—available from any autobody paint store. 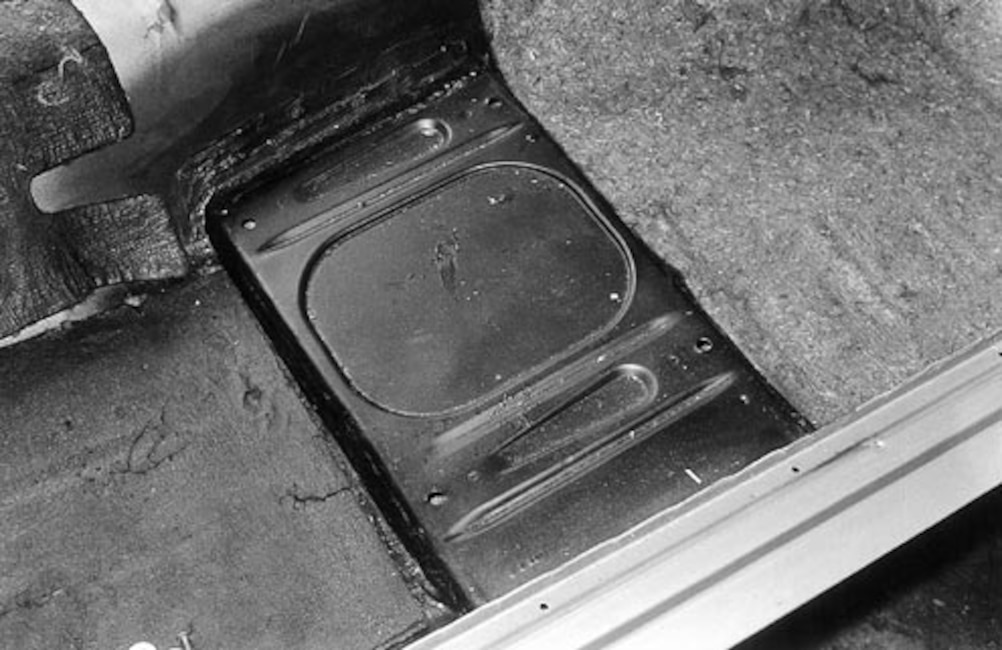 Next, reinstall the seats and the body plugs. Enjoy the ride!

One thing that has changed since classic Mustangs were new is average human height. If you’re on the tall side (taller than 6 feet), you may have a problem with headroom in your vintage Mustang, especially if you’ve installed later model high-back or aftermarket bucket seats. What do you do when the headliner touches the epidermis? Lower your seat pan height by 1 inch so you can see the road.

We wish we could lay claim to this idea, but we can’t. Mustangs Plus thought of it many years ago and put it into practice with most of its classic Mustang projects. When we saw this idea in the Mustangs Plus newsletter recently, we had to try it ourselves. We called Jerry Choate at West Coast Classic Mustang in Reseda, California, for help on this one. A very tall customer needed his seat pans lowered in order to drive his Mustang safely and comfortably. Jerry was there with the expertise.

The folks at Mustangs Plus have a different approach from West Coast Classic Mustang for lowering the seat pans, but the result is practically the same: improved headroom for tall people. Mustangs Plus suggests cutting the seat pan and creating a new lip. This lowers the seat height with minimal cutting and welding. The folks at West Coast Classic Mustang cut the pan and move the lip to achieve the same result. Regardless of how the seat pan is lowered, it must remain a structural member for floorpan stiffness and platform integrity. Bench seats are other important items to remember. Lowering the seat pan in Mustangs with bench seats will not work because of driveline tunnel interference midseat. Keep this in mind when you’re thinking about getting really low down.