Driving The 2018 Mustang With The Performance Pack Level 2 Option 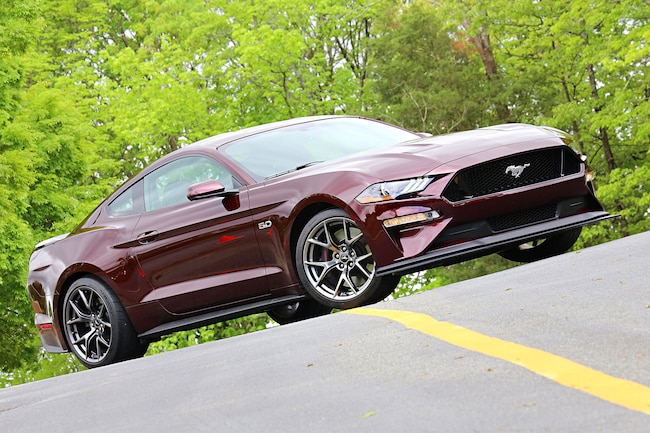 The Gen 3 Coyote growls through quad tips as the rpm ascends past 3,000. I slip the clutch and the Michelin Pilot Sport Cup 2 rubber fights to plant 420 lb-ft of torque as I bang second gear. The tires dig in and the 2018 Mustang hurtles forward around 4,000 rpm my grin expands to Cheshire Cat levels as the 5.0-liter engine's robust midrange power throbs under my right foot and climbs and the tach shows 7,000 before I bang another gear.

Blasting forward in a straight line is not what this car is built for, but it sure feels good doing it. Later as a sweeping onramp presents a clear path I unleash the power again, the suspension squats and grips as the car accelerates around the cloverleaf and blasts up the highway.

Ah yes. Turning corners is its business and business is good. The car in question is a 2018 Mustang GT with an important box checked on its order form — Performance Pack Level 2. Designed to bridge the gap between the Performance Pack option and the next-level Shelby GT350, this option is born to handle.

It has also been my unicorn. After covering its development extensively, the chance to slip behind the wheel had eluded me. That is until, fittingly, it was time to celebrate the 55th Anniversary of the Mustang and the grand opening of the Mustang Owner's Museum. At long last, it all came together. I stepped off the airport shuttle and there she was, in all her Royal Crimson glory, a Mustang fit with the elusive Performance Pack Level 2 package.

If you weren't aware there were two performance packages, we can't totally blame you. The Mustang line offers myriad options and packages, but this one is proof that more of a good thing can definitely be better.

Engineers knew that they could improve upon the Performance Pack to create a Mustang that handled even better while not giving up complete streetability. As such, the team logged plenty of hours off the clock pushing the envelope of the car to hit some pretty robust targets.

To reach those lofty goals engineers lifted a few bits from the Shelby GT350, including the Brembo six-piston front brake calipers, larger front brake rotors, and sticky tires. The latter were mounted on unique, 10-spoke Dark Tarnish wheels measuring 19 10.5 inches in front and 19 11 inches out back. A Torsen diff and 3.73 gears plant the Gen 3 Coyote power, while a K-brace and strut-tower brace keep the chassis stable under load.

"It will just beg you to go faster," Jamie Cullen, Ford supervisor for vehicle dynamics development, enthused when the package was announced. "The car has lightning-quick response and never gives up grip."

"It is the most nimble base Mustang we have ever put out, and a I have been working on the program since 2011, so that includes the Boss," Mike Del Zio Vehicle Dynamics Development Engineer later told your scribe.

We certainly can't argue with those sentiments. On tight and sweeping turns the meaty midrange torque and tossable suspension tuning combined for a car that egged us on. Was there another corner to take, another downshift to hammer, or another WOT blast to enjoy? The PPL2 made turned this Mustang into one that you just look forward to driving — and driving fast.

Helping it get there, the PPL2 runs a front sway bar that is 10 percent stiffer and the rear bar is 67 percent stiffer than the PP1 car. Likewise, the front springs are 12 percent stiffer, and rear springs that are 25 percent stiffer. These bits along with the unique front splitter and rear wing were refined with the help of feedback from Ford Performance driver Billy Johnson.

While the PPL2 package lacks the differential cooler, transmission cooler, and the vaunted Voodoo engine of its GT350 cousin, it has many of the other performance upgrades from the brakes to the aforementioned and sticky Pilot Sport Cup 2 rubber.

"It will be a car that you can daily drive, especially with the comfort of the MagneRide. The track-focused Cup 2 tires are obviously aggressive and have a pretty wide footprint all the way around, which definitely helps close the gap to the GT350," Billy added. "It also has more downforce than the standard Mustang, but not quite as much as the Shelby."

Closing that gap to deliver 24 pounds of downforce at 80 mph is attributable to the design efforts of Jonathan Gesek, who is a former aerodynamics specialist at NASA who joined Ford's aerodynamics group. He drew the parts, and Billy ensured they stabilized the car at 140 mph.

Obviously we couldn't approach those speeds on the street, but this package is said to be a few seconds quicker than the PP1 on a short track, and we have to think it would really be in its element on the road course.

On the street, however, it acquits itself well. The suspension is a bit stiffer, so the road irregularities are a bit more apparent, but the unique MagneRide tuning helps keep the bumps in check. Otherwise it doesn't give up anything as a driver. The brake pads offer ample bite, even at street temperatures, and the only real downside might be the quick-wearing characteristics of the ultra-high-performance tires.

Sure, the Shelby takes things to another level, but you can buy a lot of mods for 10 large

Royal Crimson is the striking, if difficult to capture, hue that adorned our 2018 Mustang tester. Matched with the unique Dark Tarnish 10-spoke wheels, the upcharge paint helped our ride garner plenty of positive comments, and it really shone bright in the light of day.
It had been a minute since we put foot to wood with a Gen 3 Coyote under the hood, and it brought the memories rushing back. Sure the 460-horse/420 lb-ft peaks get the attention, but that rippling midrange that got the dopamine flowing as the tach climbed, and it didn't stop pumping until the tach hit the red line.
Ford engineers worked with computational fluid dynamics and test driver feedback to develop a unique rear wing and larger front splitter that give the PPL2-equipped Mustang a lot more downforce at track speeds.
The interior is standard S550 fare highlighted by a set of cloth Recaro front buckets, which keep the driver and passenger in place while winding through the twisties. The seats are supportive, but comfortable, though you do have to be mindful of the side bolsters as you climb in and out.
The foundation of this package's performance is the deployment of the same Michelin Pilot Sport Cup 2 tires utilized on the Shelby GT350. They are mounted on gorgeous Dark Tarnish wheels measuring 19x10.5 inches up front and 19x11 inches out back. The tires are much stickier and 1 inches wider than those found car with the Performance Pack Level 1 setup. 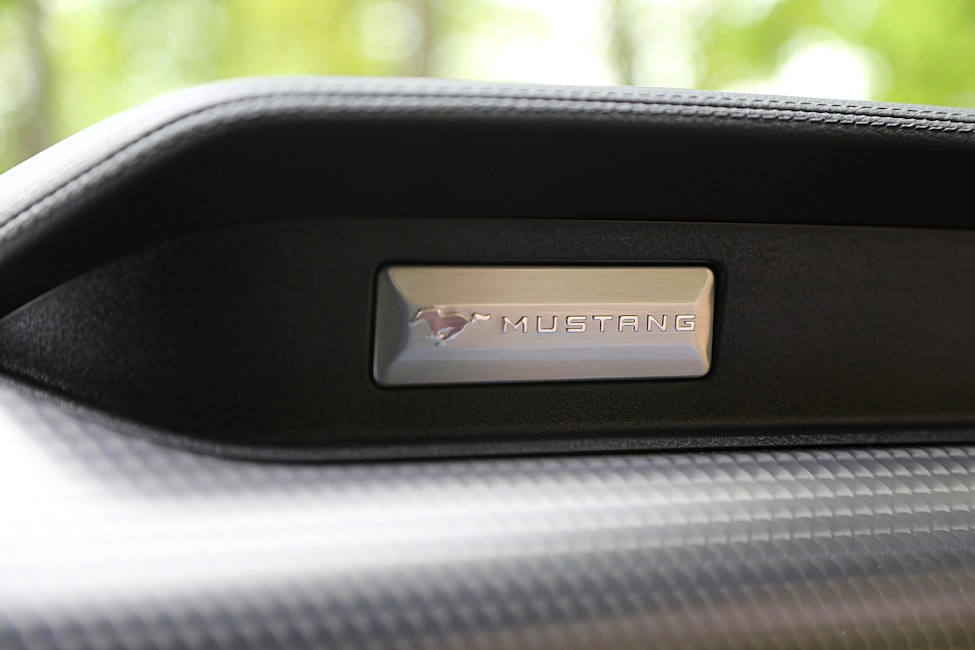 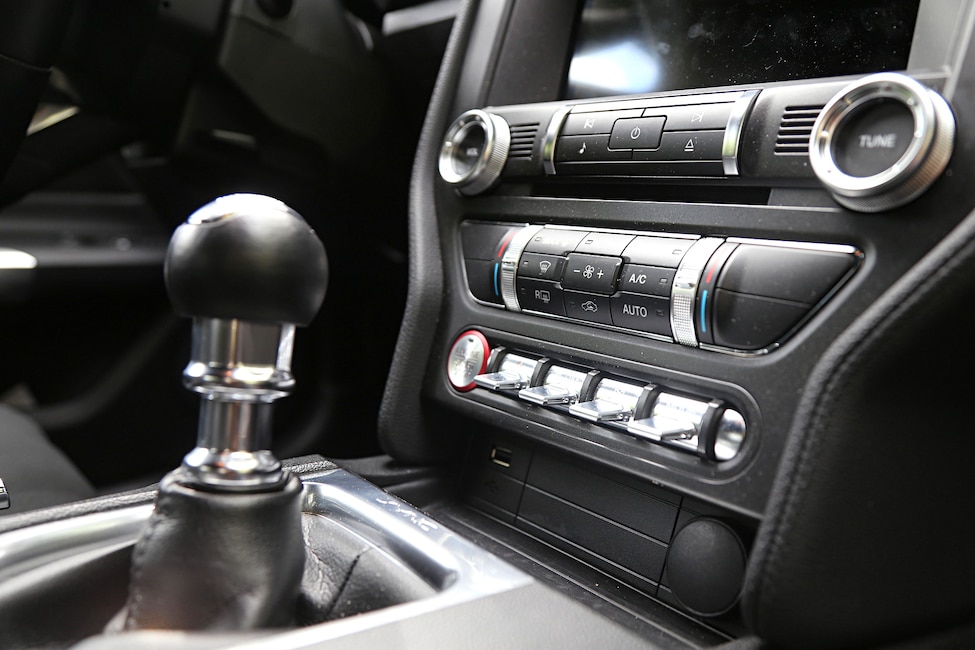 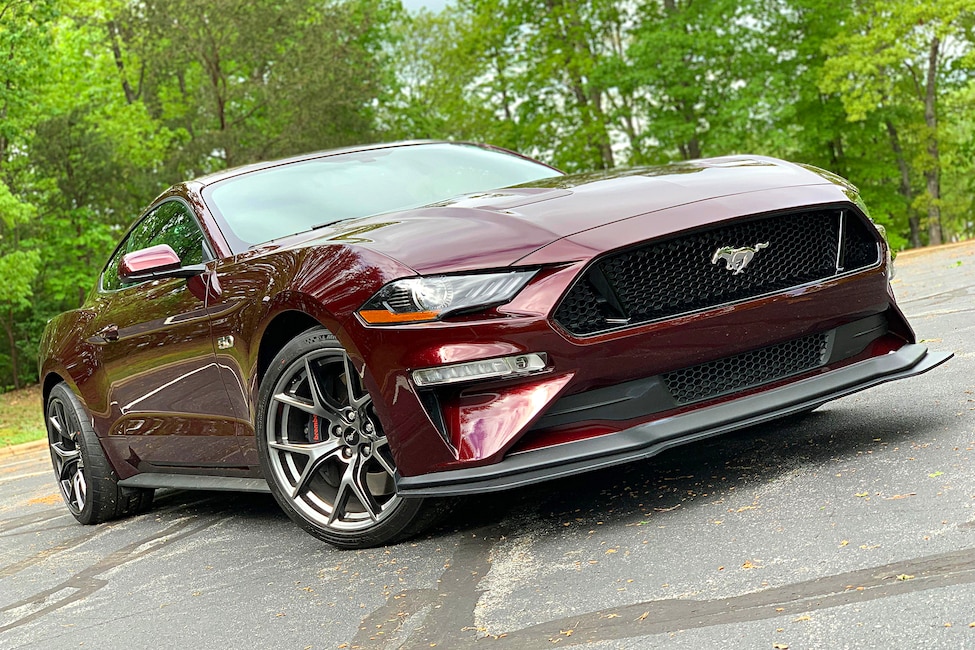 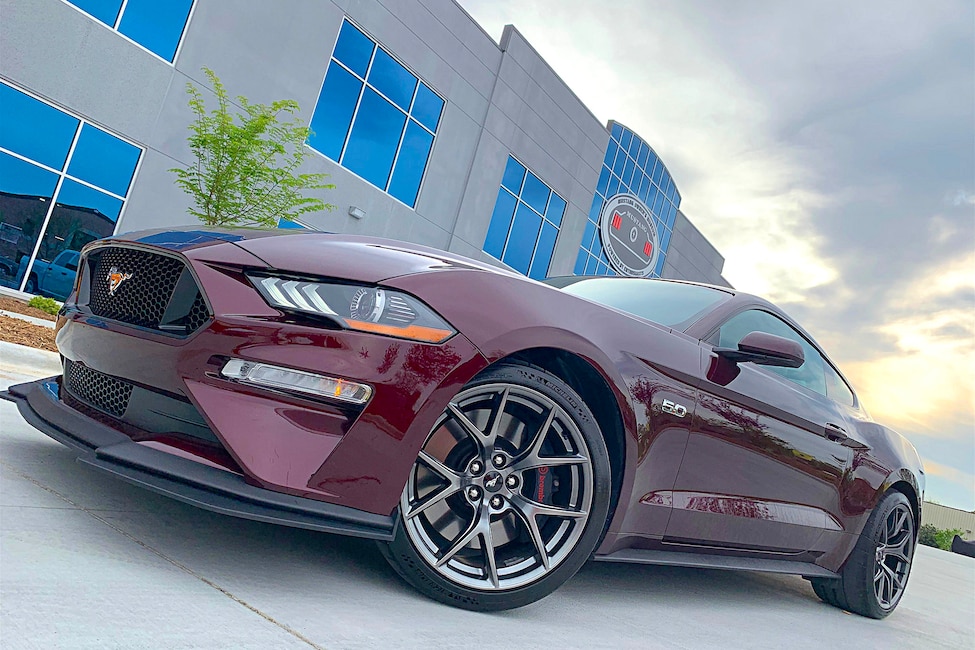 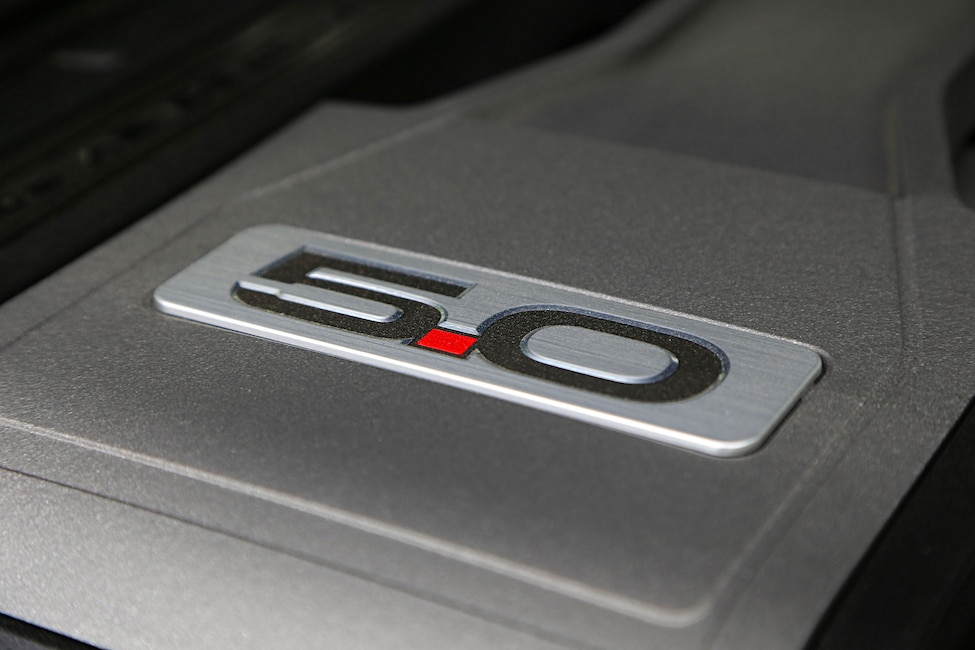 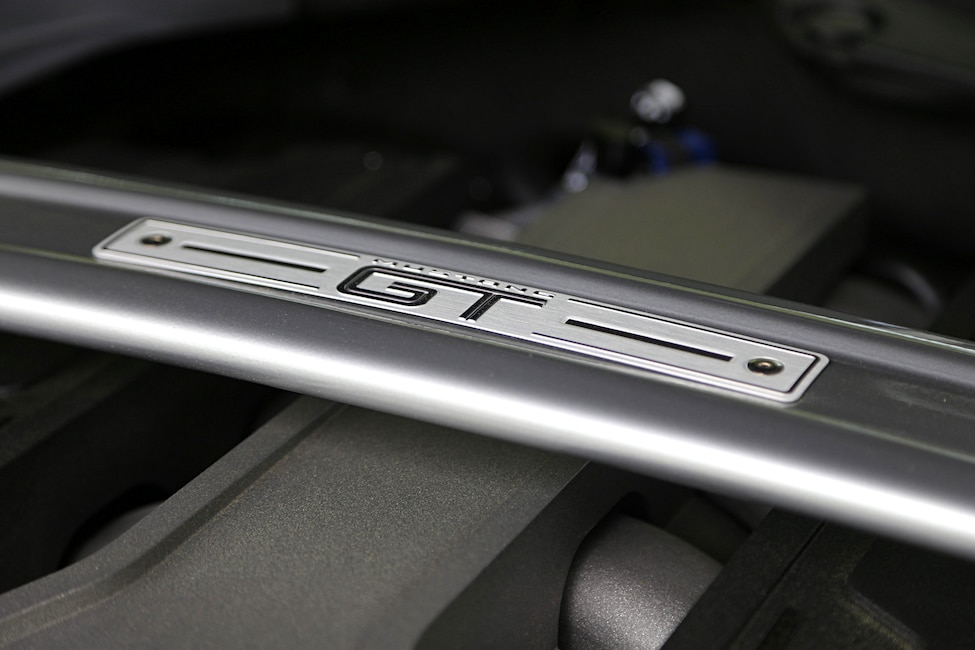 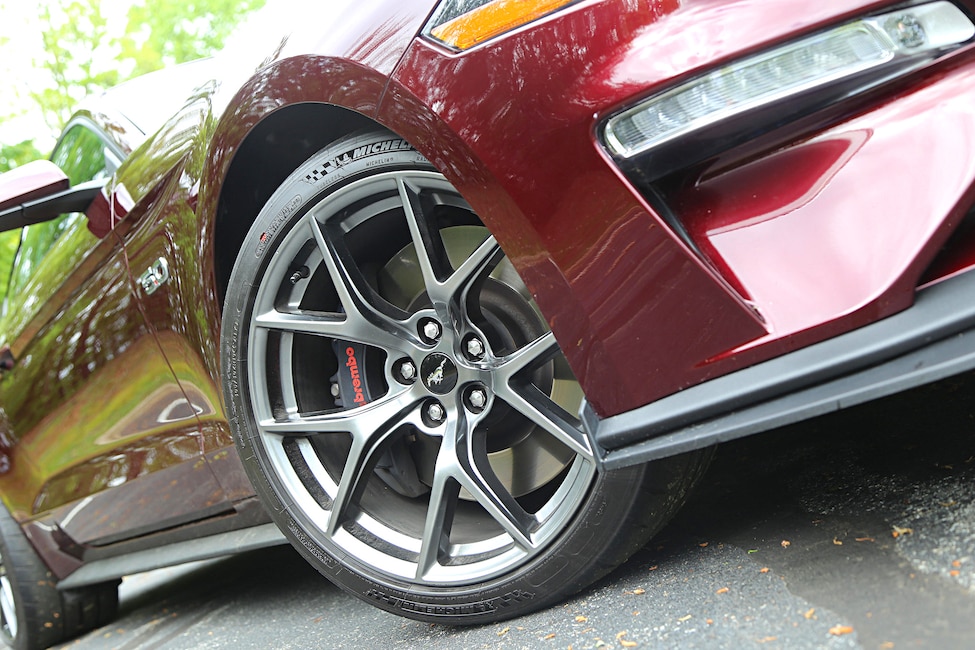