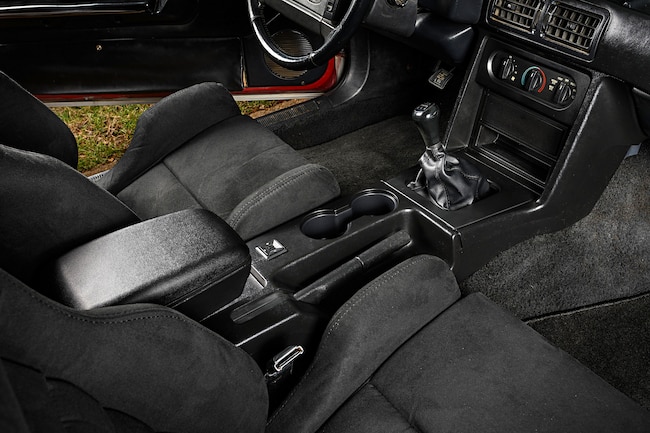 Standard interior features have changed a lot since the 1980s. USB ports and cupholders have replaced tape decks and ashtrays. Besides lacking accommodations for modern tastes and technology, classic Mustang interiors often show the scars of harsh sunlight, soda spills, and careless occupants.

Fortunately, the Mustang enthusiasts at Late Model Restoration (LMR) feel our pain. Not only does LMR offer products to restore center consoles like the one in this 1991 Mustang GT, the company also has developed an upper console panel that replaces the outdated cigarette lighter and ashtray with a pair of much-needed cupholders. LMR also offers parts to replace common wear items such as the padded armrest cover, armrest trim panel, simulated-leather upper shifter boot, shifter bezel, A/C control trim bezel, and the ubiquitous broken ashtray door. And, for pieces that aren’t replaced, LMR has interior paint to bring like-new color to faded, scuffed interior panels.

The center console in this 1991 Mustang GT was showing its age, and a gaudy aftermarket radio hacked up the forward section of the center console to boot. Clearly, this Mustang’s console needed a makeover.

Late Model Restoration sent along a bevy of goodies to bring our center console back to life and into the modern era. After a few hours of work, the results were stunning. Our center console now has the cupholders we wanted, and the whole assembly looks fresh from the factory as well.

Besides highlighting the process in the accompanying photos and captions, we’ve included a parts list so you can spend less time shopping and more time restoring. Let’s get to it!

Here’s the list of everything we used for this makeover. It’s all from Late Model Restoration.
The center console in this 1991 Mustang GT featured common maladies for Fox-bodies: a broken ashtray door, a broken armrest latch, a mangled parking brake seal, and faded plastic. The radio kept blowing fuses, and the carpet was crusty and sticky from spilled drinks (which isn’t surprising, because there aren’t any cupholders). Yuck.
We began the disassembly process by removing the armrest mount bolts hidden behind the oval trim caps.
With bolts removed, we carefully released the panel fasteners from the center console and removed the armrest.
After removing the four screws holding the center console top panel, we unplugged the cigarette lighter harness and removed the top panel.
Then, we removed the stereo. Good riddance.
To access the center console screws securing it to the dashboard on the left side, we removed the lower dash panels.
On the right side, we lowered the glovebox to access two more screws.
After unplugging the hatch release button and removing the four screws holding the console to the metal dash bracket, we pulled the center console back and out of the car.
Surprise, surprise…our ashtray door was broken. Rather than fix something we’ll never use, we replaced this whole panel with one equipped with cupholders from Late Model Restoration.
Our armrest latch was also broken—another common Mustang problem.
Here are the major pieces to our center console makeover puzzle, including Late Model Restoration’s cupholder center console top panel, armrest restoration parts, shifter boots, and black interior paint. Since LMR’s black armrest pad matched so well, we didn’t need to use the vinyl prep to paint it.
Before painting the center console frame, we filled the holes left from an aftermarket stereo mounting adapter with epoxy putty and sanded it smooth.
We used LMR’s black interior paint on the gray cupholder center console top cover and the rest of the faded interior pieces to bring them back to life. The paint is very thin, so it took two or three times as many coats as we thought we needed. Tip: Buy extra paint!
After the paint cured, we installed the parking brake handle seal. We used some cyanoacrylate (super glue) that we had on hand, but any type of glue designed for rubber should do the trick.
The painted LMR top console cover (right) is a cup-holding doppelgänger for the worn-out factory piece (left).
After cleaning and fogging the original armrest parts with the Late Model Restoration black interior paint, we installed the console armrest trim panel and padded armrest lid.
We secured the new LMR upper shifter boot to the shifter bezel using the company’s clips.
To eliminate our problematic (and ugly) aftermarket stereo, we installed LMR’s radio delete/utility panel. It cleans up our interior’s appearance (and we’d rather listen to the tunes from the tailpipes anyway).
Before installing the center console in the car, we assembled everything for a photo. This was a huge improvement over our broken and crusty center console.
While the center console was out, this was a perfect time to install a new lower shifter boot, as our original boot was torn to pieces. (Note that our transmission was out of the car when this photo was taken).
Next, we reinstalled the center console frame.
With the front eight console frame screws tight, we secured the center console top panel to the frame.
Next, we installed the LMR upper shifter boot.
Then, we installed the armrest and tightened the four mounting bolts.
Finally, we installed a fresh A/C control bezel from LMR, as our original was broken and kept falling off.
Finally, somewhere to put our drinks! Yes, we found a period-correct cola can for our 1991 Mustang.
Yeah, baby! After only a few hours of work, our center console is more useful…and arguably the prettiest thing in our Mustang’s interior.