Newsletter
Sign Up today for our FREE Newsletter and get the latest articles and news delivered right to your inbox.
Home
Modified Mustangs & Fords
How To
Interior Electrical

The OBDLink MX+ Makes Diagnostic Wizardry Work for You 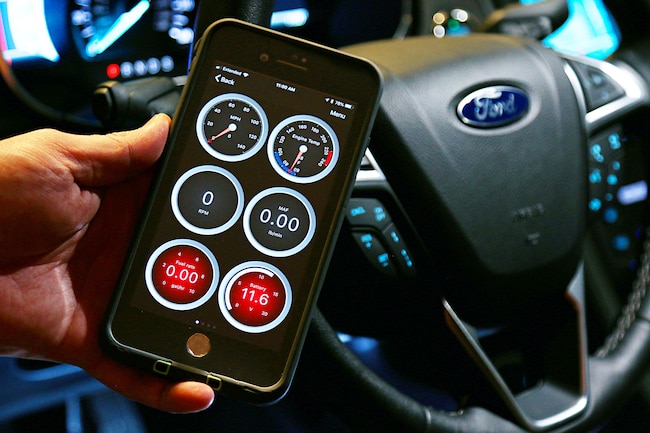 A staggering amount of data flows through the wires of modern vehicles. Instead of independent wiring and switches for every function, just about everything on today’s cars is routed through the vehicle’s computer system. Not only are the engine functions computerized, but the door locks, windows, air conditioning, braking, and even interior lighting are incorporated into a vehicle’s computer network.

All of the components are linked together on a Controller Area Network, or “CAN bus.” Think of it as a message superhighway that travels throughout the vehicle. Messages continually travel along the highway, or “bus” to and from the various components. While this may seem overly complex, the result is a system that saves wiring and improves safety and efficiency.

OBDLink MX+ is a small, Bluetooth OBD adapter that pairs with a mobile device or laptop to create a powerful diagnostic scan tool, trip computer, and performance monitor.
The dashboards of modern cars house gauges that are almost useless to enthusiasts. Aside from the tachometer and speedometer, engine vital signs such as temperature and oil pressure are little more than warning lights. The goal here is simple: unless something goes very wrong, the gauges will read “everything is fine.” This keeps average owners happy.

The OBDLink MX+ plugs into a vehicle’s on-board diagnostic (OBD) port and pairs with a user’s mobile device. This arrangement combines the computing power in devices with the OBDLink MX+’s bus decoding capability to form a powerful tool for today’s enthusiast.

Don’t let the small size fool you: the OBDLink MX+ is up to 300% faster than other devices for smooth multi-parameter graphs and more meaningful real-time gauges.
Not only can the OBDLink MX+ scan and clear service codes, it can combine engine vital signs with on-board wizardry to calculate performance metrics such as quarter-mile time. Results can be recorded and exported to a user’s laptop or mobile device. MX+’s open architecture allows it to also be used with many popular third party apps such as Harry’s Lap Timer, FORScan and Carista.

The OBDLink MX+ supports all OBD-II languages, including Ford’s and GM’s advanced proprietary networks (MS-CAN and SW-CAN), which provide access to thousands of additional enhanced OEM DTCs and parameters. The OBDLink MX+ includes unlimited vehicle-specific data upgrades, “BatterySaver” technology, and is up to 300% faster than other devices for smooth multi-parameter graphs and real-time gauges.

To put this power at our own fingertips, we installed a OBDLink MX+ on our late-model Ford Fusion. The following photos are an overview of what’s possible.

OBDLink MX+ plugs into the OBD port on all 1996-up vehicles, and supports all OBD-II languages, including Ford’s and GM’s advanced proprietary networks (MS-CAN and SW-CAN), which provide access to thousands of additional enhanced OEM DTCs and parameters.
BatterySaver technology puts MX+ into a low power mode, which means it can be safely left in place on the vehicle’s OBD port.
Unlike other Bluetooth-enabled devices that may continually broadcast their presence, the OBDLink MX+ makes unauthorized connections nearly impossible via the “Connect” button OBDLink MX+. The OBDLink MX+ only pairs to a device when the “Connect” button is pushed.
Using the OBDLink app on your device, the OBDLink MX+ is now ready to use!
Here’s the main menu for the OBDLink MX+. Diagnostics reads and clears engine codes, Dashboards offers a range of options for displaying vehicle vital signs, Maps features advanced trip computations, Monitors keep tabs on various data streams, and Logs record data for later analyzation.
Here’s just an example of some of the data the OBDLink MX+ puts at the enthusiast’s fingertips. Note that actual engine temperature, fuel flow rate, and even Mass Air Flow (MAF) rate are available for display and logging.
The settings available offer a wealth of options for configuring and customizing the inputs and outputs of the OBDLink MX+.
Besides reading any trouble codes, the OBDLink MX+ can clear codes and offer related information useful for troubleshooting.
On this EcoBoost-powered Fusion, the OBDLink MX+ can display vacuum and boost as well as lateral and longitudinal acceleration.
Those looking to compare performance changes to driving or components can use the built-in performance calculators.
A powerful tool for tuners is the OBDLink MX+’s logging capabilities. Here, Mass Air Flow Rate (MAF) can be logged vs. vehicle speed.
Even the appearance of the graphs can be customized.
Travelers and commuters will appreciate the OBDLink MX+’s maps function to log trips.
More than just a “trip” counter, the OBDLink MX+’s maps functions allow users to log distance, fuel used and fuel economy.