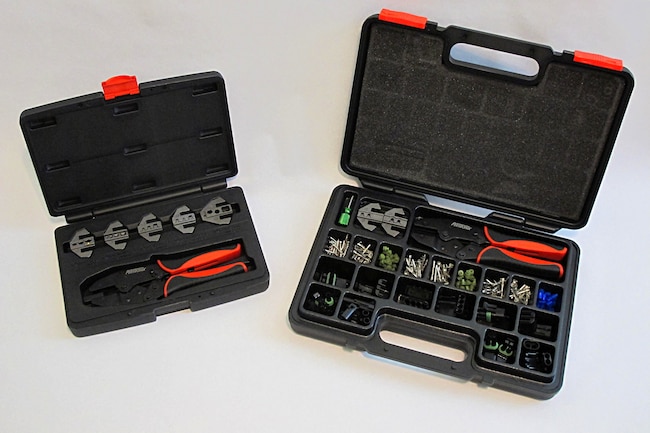 We’ve been using Pertronix products for decades. From its famous under cap Igniter ignition conversion kits to its plug wires and coils, we’ve pretty much installed everything they make for Ford engines over the years. Pertronix has no doubt had its share of tech support calls/emails on wiring its products properly and we can readily assume that some of the findings led to improper wiring terminals/crimping procedures. We’ll never understand why enthusiasts will install hundreds of dollars in audio components, performance ignition systems, aftermarket lighting, and so forth with an $8 pair of wire crimpers from the bargain bin at their local flea market. Good tools are an investment, yes, but having the proper tools means doing the job right the first time and said tools will last your lifetime.

To that end, Pertronix decided to introduce its own line of quality ratcheting crimpers that get the job done quickly and easily. These new crimpers feature quick change heads so that one ratcheting crimper tool can crimp several different types of terminals. Why ratcheting? Well it is the preferred style of crimper, as you can’t over-crimp the terminal, which can lead to terminal failure. The crimpers are offered in two different kits, plus you can buy the crimper and quick change dies separately as well. The Quick Change Ratchet Crimp Tool Kit (PN T3001) includes the ambidextrous ratcheting crimper, and five of the most common quick change crimp dies—non-insulated, insulated, D-sub, open barrel, and spark plug terminal. There is also a weather pack die available separately, or if you use a lot of weather pack type wiring connectors you might be interested in the Weather Pack Quick Change Ratchet Crimp Kit (PN T3005). This kit features the same crimper, but with weather pack dies and 220 weather pack terminals, seals, and connector shells to aid in whatever wiring project you’ve got going on. Let’s take a closer look!

The Pertronix Quick Change Ratchet Crimp Tool Kit, PN T3001, features a high-quality ratcheting crimper with soft grip handles and adjustable crimp pressure, along with five different dies that snap into place without the aid of any tools. The kit comes in a nice plastic storage box to prevent the crimp dies from getting lost.
The Pertronix Weather Pack Quick Change Ratchet Crimp Kit , PN T3005, features the same ratcheting crimper along with two different weather pack terminal/seal dies and plenty of terminals, seals, and connector shells to get your wiring job done right.
The crimp dies are designed to quickly and easily slide into the crimping tool’s jaws. Simply line up the die set and push it into the tool.
When the dies are fully and properly seated you’ll hear and feel the dies click into place where they’ll stay until you pull them back out of the tool to swap dies or store the tool after your wiring work.
No matter the type of terminal die being utilized you’ll want to place the terminal in the proper die slot so that the wire is inserted from the left with the edge of the crimp zone on the terminal flush with the die face, as seen here.
The left side of the crimper die is where you insert the wire into your terminal. So no matter if you use the crimper left or right handed, the dies are designed for left side (of tool) wire entry. Just keep this in mind when inserting terminals and you’ll get the proper crimp every time.
If for some reason you need to “cancel” the crimp (terminal not placed properly, wire slipped out, etc.) you can simply depress this lever, which releases the ratcheting mechanism and resets the tool for terminal installation.

Each of the five included terminal dies are shown here with their respective terminal types that they can crimp.

The weather pack dies lock into place with the same function. Slide them into the jaws of the ratchet crimper until you hear/feel the engagement “click” from the tool.
We’re showing the tool being held “upside down” in this photo for those lefties out there (like us). By holding the tool like this in our left hand you can see how the weather pack terminal is seated to accept the wire (and wire seal) from our right hand, even though it is technically the left side of the tool.
Also included in the weather pack kit is a terminal release tool. This tool is required to “de-pin” a weather pack connector. Useful for running wiring through a small hole and then reinstalling the weather pack connector, or for removing wires for repair or installed in the wrong cavity in error.
To use the tool you simply insert it into the connector terminal cavity and over the terminal, seating it until the terminal’s lock tabs are depressed. This will allow the wire to be pulled from the rear of the connector.
Using a spare terminal for a visual aid, this is what happens when you use the release tool. Sliding it down over the terminal you’ll feel some resistance when you get to the two barbs that lock the terminal into the connector shell. Press the tool down to compress these two barbs and you will free the wire terminal.
The Weather Pack Quick Change Ratchet Crimp Kit includes the proper size/color seals (for 10-20 gauge wire) to ensure a water-tight weather pack connection, however weather pack kit does not include cavity plugs. So if you only have a three wire connector left and only using two wire cavities you’ll need to pick up some cavity plugs from your favorite wiring supply source.
Speaking of cavities, the kit includes several of the most popular style male and female connectors with weather seal pre-installed. The males on the left are called “towers” and the female shells on the right are called “shrouds.” The kit includes single, two, three, and four wire connector shells.