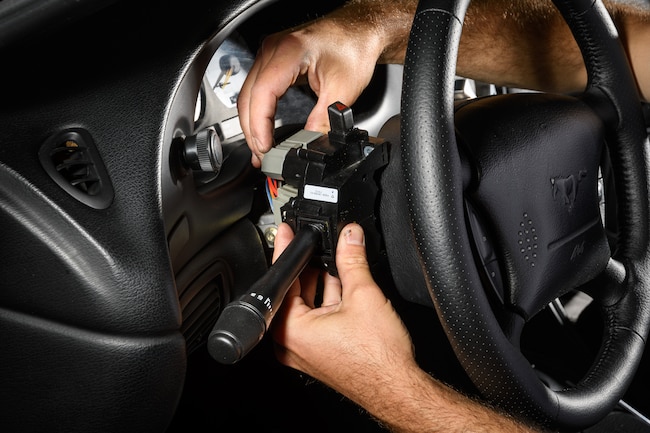 The turn signal switch on 1994-2004 Mustangs does more than just operate the turn signals on your Mustang. It also controls the windshield wipers and houses the hazard flasher switch. That’s why Ford refers to this gizmo as the “multifunction switch.” So, if your wipers, hazards, or turn signals are, uh, “on the blink,” replacing the switch is an easy resolution.

Our 1994 Mustang’s intermittent wipers were a bit too intermittent (read: not working). Fiddling with the switch triggered them, so we knew the switch was the culprit. Fortunately, multifunction switches for 1994-2004 Mustangs are widely available. We could’ve bought an aftermarket switch and saved a few dollars, but we sprung for a new switch from Ford anyway.

While the installation is straightforward, there are a few tricks to make the job easier.

2. With the ignition switch removed, we unscrewed the three column trim panel cover fasteners and removed the covers. Note: it helps to tilt the column down to remove the top cover.

3. Next, we removed the two Torx screws holding the multifunction switch from the column and unplugged the electrical harnesses. Just be careful not to damage the brittle connectors—use a little patience and pull straight.

4. Finally, we swapped the switches by plugging in the harnesses to the new switch and fastening it to the column with the Torx screws. Then, we replaced the trim panels and reinstalled the ignition switch.