The Benefits of Upgrading to a Li-Ion Battery 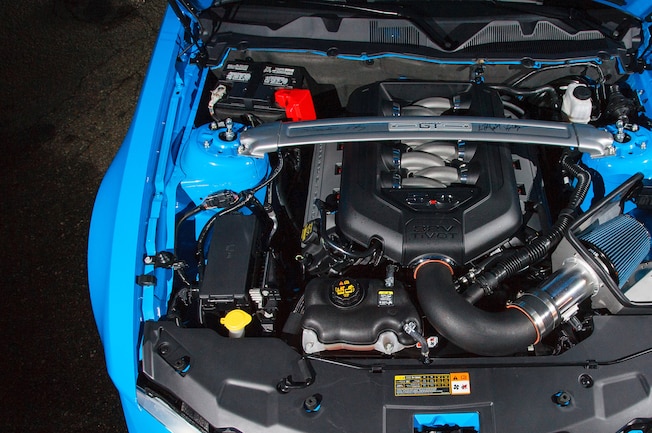 We don’t often think about that black lump in the corner of the engine compartment until it stops doing its job. Today’s lightweight battery technology has some rethinking conventional wisdom that a heavy battery is a necessary evil.

The most common car battery is a “flooded” lead acid battery. It’s made up of lead plates that are “flooded” in a bath of acid. Some aftermarket batteries use a modified lead-acid construction called “absorbed glass mat” or “AGM.” These batteries often replace the flat lead plates with those in a spiral shape, separated by a fiberglass buffer, or mat, that’s saturated with the acid solution.

AGM batteries can provide a higher current (amperage) for their size, but the energy density (amount of energy per pound) of both flooded and AGM lead acid batteries are roughly the same.

Battery location impacts performance. Traditionally, batteries were located in a front corner of the engine compartment (A), but in modern cars it’s not uncommon to find the battery near the firewall (B) or in the trunk (C). The latter balances nose-heavy cars, but the former places heavy battery closer to the car’s center of gravity.
An example of a firewall battery location is this 2011 Mustang.

Considering (and changing) battery location is one way of minimizing the consequences of a heavy battery. Traditionally, batteries were located in a front corner of the engine compartment, easing access for “jumping” batteries between two cars in an emergency and to provide short runs for high-current starting cables. However, as modern cars’ electronic systems are less likely to discharge batteries (automatic headlights, etc.), auto manufacturers enjoy more freedom in battery location. It’s not uncommon to find the battery in the trunk (e.g., German and Chrysler cars) or near the firewall (Ford and GM vehicles). The former balances nose-heavy cars and the latter places the heavy battery closer to the car’s center of gravity, increasing its steering response.

A common way of minimizing the impact battery weight has on performance is to relocate the battery. Try putting a heavy car battery in various locations in a shopping cart, and compare the effort needed to maneuver the cart! There are pitfalls with battery relocation however, including power loss from extended electrical cables, additional weight, and mounting safety concerns.

On this road race car, the battery was located to the trunk.
Li-Ion batteries are a game changer. A Li-Ion battery can be one third of the weight of a lead-acid battery for the same energy storage. This aftermarket Li-Ion battery weighed 7.5 pounds, and its lead-acid counterpart weighed 35 pounds.

However, relatively new battery chemistry, Li-Ion, is changing the calculus on car batteries. The energy density is roughly three times that of a lead-acid battery. Since a Li-Ion battery can be one third of the weight of a lead-acid battery for the same energy storage, Li-Ion batteries are popular in mobile devices and cameras. That same technology is now available in car batteries.

Lighter batteries offer a new option: instead of relocating the battery, why not install a lighter one in the OEM location? There are a few aftermarket companies offering Li-Ion batteries, and while considerably more expensive, the benefit of reducing battery weight (especially if located on the front corner of the car) cannot be overstated.

Instead of relocating the battery, swapping out the heavy lead-acid battery for a lightweight Li-Ion unit shaved 27.5 pounds off the nose of this Mustang.