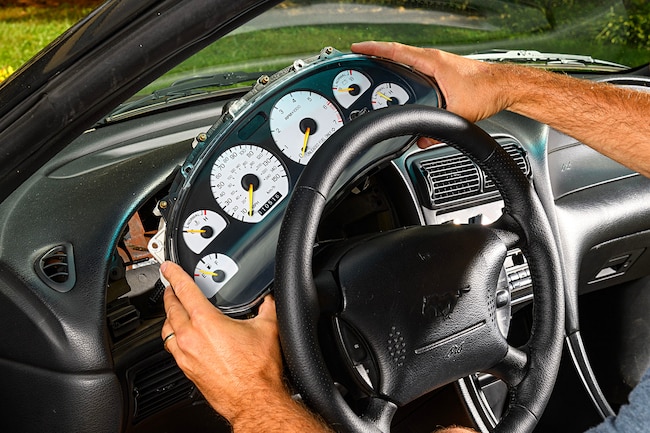 Keeping track of mileage, like birthdays, after a certain age is perhaps too depressing to document. As the years tick by with increasing velocity, it’s human nature to look fondly on past. So while it might seem attractive to continue claiming one’s age as twenty-nine well beyond that mark, it’s rather inconvenient when the odometer on your 1994-1998 Mustang stops spinning.

The odometer on our 1995 Mustang GT gave up the ghost at after two decades and 110,515 miles of service. Luckily for us, Late Model Restoration offers an inexpensive way to get those odometers back into action: their Odometer Repair kit. While we had the gauge cluster out, we added LMR’s White Face Gauge kit and Diode Dynamics LED bulb set to our much-loved SN95’s gauges a, uh, “facelift.”

In the end, we not only got our odometer function back, but our gauges gained a brighter, modern look—during night and day.

2. Luckily for us, Late Model Restoration offers an inexpensive way to get those odometers back into action: their Odometer Repair kit. While we had the gauge cluster out, we added LMR’s White Face Gauge kit and Diode Dynamics LED bulb set to our much-loved SN95’s gauges a, uh, “facelift.”

3. We began the procedure by removing the light switch knob using a small screwdriver to release the clip holding it onto the headlight switch shaft.

4. After removing the two T20 Torx screws at the top of the bezel, we removed the bezel by pulling gently around its perimeter to release the retaining clips.

5. Next, we removed the instrument cluster’s four mounting screws with a T20 socket.

6. With the gauge cluster free, we unplugged the two harness connectors leading to the cluster.

7. Next, we removed the screws retaining the gauge cluster cover and set the cover aside.

8. The cover hides this last screw, so we removed it as well.

9. We used a plastic prying tool to free the gauges from the backing plate.

10. Then, we removed all three gauge panels from the backing plate.

11. With the speedometer flipped over, we then removed the odometer motor from the housing.

12. With the motor removed, we used a pliers to pull the black plastic driven gear from the housing.

14. After pulling off the OEM worm gear from the motor, we pushed on the new gear from Late Model Restoration Supply.

15. Next, next, we installed the new odometer gear into the speedometer housing and remounted the motor.

17. Since we had the cluster removed from the car, we used a flashlight to ease alignment of the white face decals with the translucent areas of the gauges.

18. We peeled a white face gauge decal from its backing and sprayed it with mild soapy water.

19. Next, we carefully threaded the needle through the decal’s hole and around the needlbe base.

21. After the decals dried, we replaced the gauge cluster cover.

22. Before reinstalling the gauge cluster, we removed the dim incandescent bulbs so we could replace them with LED bulbs.

24. With the gauge cluster clean and refreshed, we reinstalled it into our much-loved 1995 GT.

25. Not only does our odometer work properly (it moved a mile!) the white face gauge kit and LED bulbs gave our instruments a brighter, modern look.

Canadian Shane Sweeney, who hails from just outside Toronto, Ontario, owns this 1995 Mustang GT convertible that has been mostly built by Joe Da Silva of Da Silva Racing.