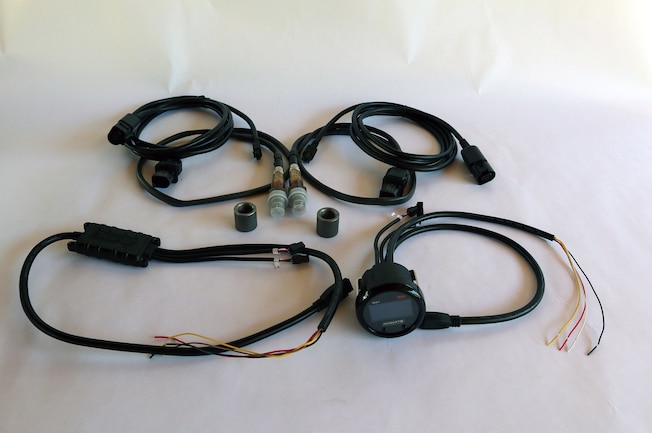 An engine relies on two things to run: spark and fuel. Sure, there are a million other things to consider when speaking of engine operation and power, but regardless of the type, size, or brand of engine, it has to have spark and fuel. (Diesel engines are an exception since their combustion comes via compression, not a spark generated by an ignition system, but when’s the last time you saw a diesel Mustang?).

When it comes to the fuel half of the equation, fuel and air are combined to generate an air to fuel ratio, often abbreviated as AFR. In any discussion of engine tuning, the AFR is one of the main topics. The AFR defines the ratio of the amount of air consumed by the engine compared to the amount of fuel, and proper AFR calibration is critical to performance and durability of the engine and its components.

A “stoichiometric” AFR has the correct amount of air and fuel to produce a chemically complete combustion event. By definition, stoichiometric is the calculation of relative quantities of reactants and products in chemical reactions. Which is a fancy way of saying it’s a mathematically derived “ideal” ratio of air to fuel. For gasoline engines, the stoichiometric AFR is 14.7:1, which means 14.7 parts of air to one part of fuel. The stoichiometric AFR depends on fuel type—for alcohol it is 6.4:1 and 14.5:1 for diesel. For the purposes of our conversation here, we’re just concerned with a gas-burning engine, so 14.7:1 is the ratio that lies in the middle of a “rich” or “lean” mixture. A lower AFR number contains less air than the 14.7:1 stoichiometric AFR; therefore it is a richer mixture. Conversely, a higher AFR number contains more air and therefore it is a leaner mixture.

Leaner AFR creates higher temperatures as the mixture burns. Generally, normally aspirated spark-ignition gasoline engines produce maximum power just slightly rich of stoichiometric. In practice it is usually kept between 12:1 and 13:1 in order to keep exhaust gas temperatures in check and to account for differences in fuel quality. A 12:1 AFR is generally considered to be about right on a gas engine under full load (wide open throttle, hooked up and haulin’ butt), though there are certainly exceptions depending on a million different things.

Electronic fuel-injected engines allow precise control over AFR, whereas a carburetor is more primitive—the AFR depends on air flow and carb jetting, basically. Once it’s set, your AFR is what it is until you readjust the carburetor. Because of this, an air fuel ratio gauge, like the Innovate DLG-1 we’re installing in this story, is a fantastic tuning tool to tell you where your AFR is and how it changes over different rpm and load. Without an air fuel ratio gauge, the only way to tell what your AFR is is to “read” the spark plugs. An overly rich mixture will also burn your eyes and nose with the exhaust gas, but that’s hardly precise.

Innovate has several types of air/fuel ratio gauges as part of its Modular Tuning System (MTS). As the company’s own website explains, “All Innovate products are completely modular, enabling you to build the perfect tuning system for your needs. The MTS is scalable, and all components share a common digital communications protocol. A simple and common configuration is an MTX-L PLUS gauge for A/F monitoring. A more complex setup might include an LC-2 on every cylinder, a LM-2 for recording, two TC-4 PLUSs for exhaust gas temperature (or CHT), an AuxBox (LMA-3) for intake and turbo temp, speedo & TPS, and lastly an MTX-L PLUS to monitor the data in real-time.”

For the sake of simplicity in this story, we’re going to install a DLG-1 digital air/fuel ratio gauge, with an optional LC-2 Digital Wideband “Lambda” 02 Controller, into a carbureted 351W-powered 1966 Fairlane. (It’s not a Mustang, but it’s Mustang’s bigger brother and everything shown here applies directly to a Mustang.) The DLG-1 by itself can read one input from an oxygen sensor installed in the exhaust system—adding the LC-2 allows us to use a second sensor in the other side of the exhaust so we can read both banks of the engine through a single gauge. Normally, the AFR should be roughly identical between the left and right banks, but variations do occur, and a radical difference in ratios with use can point to a dead cylinder, poor mixture distribution—like a poorly designed intake manifold or very leaky exhaust manifold/header—and other maladies.

1. This is the part number 3891 DLG-1 Dual Lambda (AFR) Gauge Kit, minus the serial cable that allows connecting the gauge to a laptop with Logworks 3 and LM Programmer Software Package. The long cables at the top connect the oxygen sensors to the gauge itself. On the left is the LC-2 controller, which is necessary to read the second oxygen sensor and translate that to the gauge.

2. A white gauge face and silver bezel are included in the kit so you can change the appearance of the gauge.

3. We installed the gauge in a 1966 Fairlane, choosing a spot under the dash and next to the existing 3-gauge panel.

4. This is the wiring diagram for the kit. The wires to concentrate on for a basic installation are the red, black, and white wires. The red wire needs to be connected to a switched 12-volt source (12 volts when the switch is on; no voltage when the switch is off). This circuit should be able to handle a 6-amp load, and you need to install a 5-amp fuse inline with this connection to protect the gauge. The black wire needs to go to a good ground, the best being the negative side of the battery. Connect the white wire of the LDG-1 to a headlight power wire (12 volts hot when the headlights are on) to enable the display to dim at night. Innovate warns NOT to connect this wire to the headlight dimming wire since it will cause the gauge to malfunction. The yellow wires from both the DLG-1 and LC-2 (and brown on the LC-2) are optional for outside analog inputs.

5. Circuits that share power with the vehicle’s stereo, ignition system, computer, lighting, or fuel pump should not be used for the switched 12-volt wire (red). If in doubt, install a relay for a separate circuit.

6. We used the relay method, mounting a parts store-sourced relay on the inner fender directly above the battery.

7. Though the initial setup with the relay as shown in the previous photo used crimp connectors, the correct way to wire a car is to solder each connection. We also used an inline fuse holder with a 5 amp fuse to protect the circuit.

8. Once the gauge was mounted and the basic wiring was done, it’s time to go under the car and weld the included oxygen sensor bungs into the exhaust system on each side. They should go at least 24 inches downstream of the exhaust port, after the collectors (and before an H- of X-pipe). Don’t mount them so the sensors point down, since moisture and condensation will collect and ruin the sensor.

9. We installed ours at about 3:00 o’clock (from this side) just after the header collector on each side. Knowing that we’d have to drive the short distance home from the muffler shop where we had the bungs welded in (they charged us $40), we tried to find 18mm pipe plugs to avoid the obvious exhaust leaks and came up completely empty. Then the shop technician told us an 18mm spark plug works for that purpose. D’oh!

10. The cables from the oxygen sensors have to make their way into the car somehow, so instead of drilling a 1-inch hole (necessary for the cable connector to pass through the hole) in the Fairlane’s virgin floor, we drilled it through an existing floor plug. There’s enough room to run both cables between the floorpan and the subframe connector and secure them with zip ties, keeping them from hanging down and being in peril.

11. Use a grommet to protect the cables from the rough edge of the hole. This plug was directly in front of the front seat—not ideal but far enough back to avoid them getting stepped on. The cables were coiled underneath the seat and covered with the carpet.

12. Both the DLG-1 and LC-2 have 4-pin Molex connectors labeled IN and OUT. Using the cable (part number 3846, included in the kit), connect the OUT port of the LC-2 to he IN port of the DLG-1. We mounted the LC-2 and its cables under the dash, behind the glove box.

13. The DLG-1 has three different displays modes that can be cycled through on the main screen with the left and right interface buttons. It can be configured to display both A/F channels in equal focus or either one of the two A/F channels in greater focus than the other. The interface buttons are also required to calibrate the gauge to the sensors and LC-2. Once the DLG-1 and LC-2 are connected to each other, they must be “synced” together. Turn the key to the accessory position (don’t start the engine) to power up both units. Once the DLG-1 (the gauge) is on, press and hold both interface buttons for five seconds. That will sync the two together. There is a separate procedure to calibrate the oxygen sensors—it’s very easy and is all spelled out in the instructions.

14. With everything hooked up and the car at idle, we were shocked at how dialed-in the tuners at Westech had our Holley set. The AFR was a perfect 14.4:1 on both banks. Again, this is at idle. When we lean into the throttle, especially under load like driving, AFR goes richer to about 12.9-13.2:1. Which is about as good as you’ll ever get a carburetor to perform.

Chris Schuette has kept his car for twenty-five years and even to this day, it's still a work in progress for him. - Modified Mustangs & Fords Magazine

Come take a look at Ann and Eddy Hanley's 1966 Fairlane hardtop, which features a NOS 1968 427 FE side-oiler block engine. Read on for more details along with photos only in Modified Mustangs & Fords

Check out this extremely modified 1966 Ford Fairlane that took owner Doug Schultz hours of fabrication and is powered by a 514ci fuel-injected big-block. - Modified Mustangs & Fords

Jayson Seibert's '66 Fairlane Dropped Us To Our Knees