Battery Keeps Dying? Here’s How To Fix It

Charging System Tech: How to check for a drain on your battery 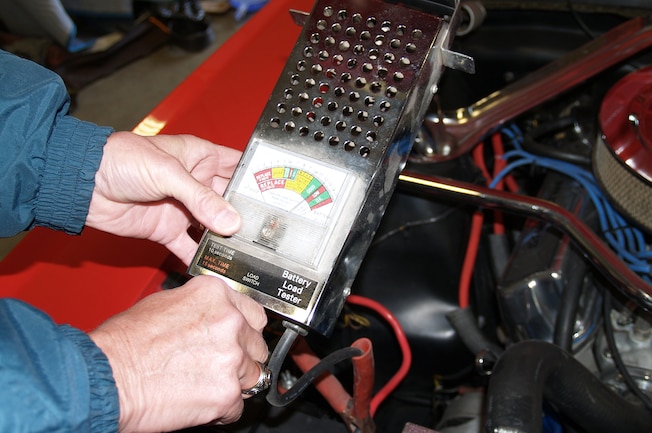 One of my customers brought his 1965 Mustang back to me citing a problem with the charging system. He said that after four days, even with a trickle charger on the battery, the system would be low and not want to turn over the engine. I felt this was the perfect opportunity to talk to our readers about battery drains, charging, and parasitic draws.

Checking for parasitic drains and non-charging is a little easier on older Mustangs, primarily because there is very little drawing power on an original car. Cars with computer controlled EFI conversions, monster stereos, or other add-ons can complicate finding the problem with a drain on the battery. Other than a Rally Pac or factory clock, there isn’t really a drain on the battery until a door is opened or the lights are pulled on. The procedures are the same, but there is much less to check.

A power drain on the battery can be caused by one of the following:
1. Dirty connections—the number one reason the battery won’t charge or turn over the engine
2. Damaged battery or old battery that no longer accepts a charge
3. Defective alternator not charging
4. A parasitic draw caused by a circuit that is shorted or left on (for example, you didn’t close your door tight and the interior lights stayed on) This is how I go about finding the source of the non-charge or drain. Remember, you can have more than one condition occurring so check them all.

A load tester not only checks the voltage of the battery, it can apply a load across the battery to determine if the battery is getting weak and can still accept a charge. You may be able to get one from some parts stores loan-a-tool, or if you want most parts stores can do this for free.

Loose or damaged connections at the battery are the biggest reason for charging failures. Under the heaviest load, starting the car, current running from the battery to the cable can arc and leave carbon deposits between the two points, which creates a resistance to the flow and can eventually lead to the battery not charging or being able to put out enough current to turn the starter. First thing to do is to inspect the connections between the battery, cables, starting solenoid, and starter for bad corrosion or damage. Replace any damaged cables and clean the battery terminals before checking the battery.

With only a Rally Pac installed, this car is pulling too many milliamps and is showing a draw somewhere.

Most battery damage occurs in the heat of summer and shows itself in the cold of winter. To test the battery, you need a voltmeter and some form of load to put across the battery. An inexpensive battery tester with a load capability is available to perform this test, and may be available on your auto parts store’s loan-a-tool program. Set your meter to DC volts above 15 volt range and measure the voltage across the battery terminals, or put your load meter across the battery posts. Even if you battery is reading 12 volts or a little more, you need to put a load across the battery to see if the voltage drops significantly under load. If you have a load tester, it will generally tell you in the scale if your battery has a low-load capability. Another way to do this is to pull the lights, turn on the key (don’t start the car) and turn on the heater blower on high. The heater motor is the second biggest user of current. If the voltage drops three or more volts, the battery is probably getting weak. A 500 or more cold cranking amp battery should have no problem running a 2-3 amp blower motor without losing voltage (or very little). Take the battery to a parts store to double check it, but you are probably going to need a new battery.

We measured the A/C output of the alternator and found 20 volts of A/C power, indicating a problem with the stator and diodes in the alternator. Once the alternator was changed, the A/C problem went away and so did the parasitic draw on the battery.

If your cables are clean and the battery will hold a charge, it is time to test the charging circuit. With a full charge on the battery you can turn on the engine and test the charging system at the battery. With you volt meter set for DC volts, place the red probe on the positive and the black probe on the negative of the battery and read the voltage. It should be charging somewhere around 14.5 volts. If it is charging a lower voltage (or is staying at 12 volts and not rising) then you may have an alternator or regulator problem. If it is over 14.7 volts it is overcharging and you may have a regulator problem. Ford adjustments from the shop manual say between 13.5-14.6 volts, depending on temperature. If the charge is good, move to the A/C current test.

Alternators create A/C power, and your car runs on D/C power. The alternator converts A/C to D/C through a series of diodes in the back of the alternator. If one or more of these diodes fails, then A/C power is put out on the lines and can cause problems with charging the battery. A failed diode can cause a parasitic drain while the engine is not running. You can test this in the car. Put your volt meter into A/C mode and check for A/C power while the engine is running by touching the probes to the battery terminals. Here’s where it gets tricky. Some people say there should be no A/C voltage, some say about .5 volts or less, some say more. I am in the .5 volts or less crowd. Our customer’s car was reading 20.5 volts A/C and by changing the alternator our draining problem went away. Parasitic Drain

Power drain is measured by the current flowing through the battery. A drain of 50 milliamps or more will cause the battery to drain down in a few days. Modern cars have computers and memories that require constant power, but older cars don’t (with the exception of add-ons you may have installed). To check for a parasitic drain, you need a voltmeter that will read current in a 10 or above amps range.

Make sure the doors are closed, the key is out and the engine is off. Put your meter in its highest amp range, and then remove the negative battery cable. You can do it from the positive side but there is less chance of shorting out if you disconnect the negative. Touch one probe to the cable and one probe to the battery terminal, so the electricity makes its circuit through your meter. With no circuits open (interior lights, e.g.) you shouldn’t read any real current flow in cars without any accessories like a Rally Pac. Modern radios and other add-ons will draw a couple of milliamps. Move your meter’s range down until you are reading current flow. Anything around 50 milliamps or more is a problem and you will need to chase down the parasitic drain in your car.

Checking for a parasitic drain involves pulling the fuses one by one and seeing when the drain goes away; much easier when you have an original Mustang circuit with less than ten fuses. Before you pull the fuses, disconnect your meter from the battery BEFORE you open the door. A short in the lighting circuit can cause damage to the meter. Secure the door jamb switch to turn off the interior lights before reconnecting the meter. Then pull one fuse at a time until you find the circuit that is causing the trouble. Remember, aftermarket radios, under dash A/C systems, electric fuel pumps and other aftermarket devices usually have their own fuses. Check your aftermarket equipment first—it is usually the culprit. Once you have found the circuit, grab your factory wiring diagram and start hunting down the drain. I usually start at points in the circuit that are common to the whole circuit; the headlight switch for example. From there you can run out to the other circuits to find the problem.

We found a small draw on the customer’s battery, and when we checked the A/C on the battery we found that one or more diodes had failed in the alternator. A new alternator fixed the problem. With a little patience, a good meter, and a wiring diagram, you can successfully find out how your battery is draining.