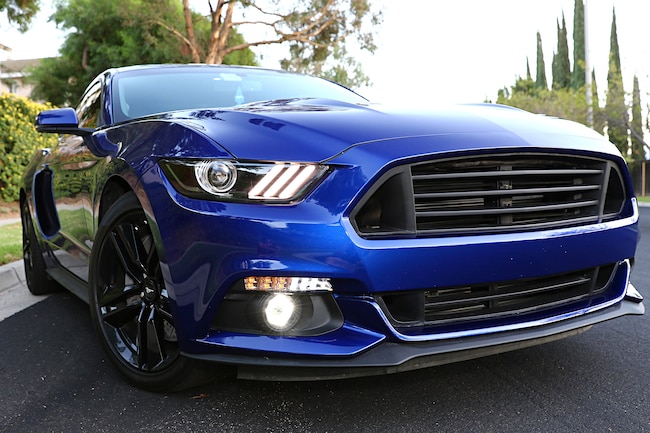 One subtle way to accentuate the appearance of a Mustang is lighting upgrades. Generally easy to install and affordable, modernizing the appearance with LED based lighting always looks good.

Our Ecoboost S550 has already received a variety of pre painted parts upgrades by MMD, but it was time to take that next step. We turned to our friends at Raxiom for a set of their latest GT supercar inspired tail lights, LED fog lights, and LED turn signals.

Raxiom stands behind its product and offers a full two-year warranty. We can tell you from personal experience that the fit and finish of Raxiom’s parts are top notch and very easy to install. Its updated tail light designs were first introduced for the 2010-2012 Mustangs. Soon after they released their 2013-2014 Mustang-inspired tail lights for the 2005-2009 S197s. These lights have been a huge hit, but how do you give another option for the 2015+ Mustangs? Easy, design a set of lights off Ford’s latest supercar.

When accessing the bottom of the car to replace the turn signals, the Raxiom LED fog lamp upgrade is virtually effortless. These direct replacement fog lamps house a perimeter halo of LEDs for daytime running lights as well. While this isn’t normally an option for the fog lights, a small amount of wire splicing is needed to make this conversion happen. Don’t worry, no specialty tools are needed.

1. The tail lights are the easiest to install so we started there. A few black nut covers come off by hand, and then simply unclip the rear plastic cover by pulling out and up. A ratcheting wrench makes quick work of the 10mm nuts that hold the tail light’s studs to the car. Unplug the harness and the tail lights come right out.

2. Transfer the top trim piece from the stock tail light, slide the new tail lights in place, plug in the harness, and bolt everything back in place. The tail lights are completed in less than 10 minutes.

3. We then headed to the front of the car to begin the fog light and turn signal install. You’ll want to jack up the front of the car to access the lower splash shield fasteners. Raxiom’s instructions say to remove the upper radiator cover and the push pins that hold the inner fender liner in place. From our experience, the installation is just as easily performed with only removing the lower splash shield.

4. The plastic surround that holds the turn signal and fog light has to come out to replace the turn signals. You can leave the fog lamps in place and remove the whole assembly as one piece, but we found it was a bit easier to access all the bolts for that bezel with the fog lamp removed first.

5. The Raxiom turn signals look like mini New Edge Mustang headlights! The appearance difference here is pretty obvious and you probably understand why we like these so much.

6. The fog lights look very similar, but now you can see the halo daytime running lights that circle the fog lamp.

7. Only a handful of bolts hold the turn signal and fog light in place. We decided to reassemble everything now that we were comfortable with the bolt locations for reassembly.

8. The wiring for the DRLs can be ran right above the inside lip of the splash shield and zip tied in place. This is an alternative option to running it along the bumper core support as Raxiom suggests.

10. The front of the Mustang is much brighter now with the day time running lights on the fog lamps. You can also see how well the turn signals compliment the rest of the front of the car.

11. With the head and fog lights on, the operation resumes as normal.

12. We really like the look of the Raxiom tail lights on the S550, especially as they sequence in a circle. Definitely a way to set yourself apart from the crowd at the local car show!